When you fly into Srinagar, you typically see a lot of greenery. When I went in on September 11, I saw from the plane several lakes of muddy water with tiny dry patches. The flight was eerie, there were only 15 people on it. There was a strange silence at the airport. The luggage was all cartons. On the streets, there were people with stuff on their heads, gangs of Bihari migrant labourers, garbage all around. The scene kept increasing in terms of its intensity.

It started for me on September 6. I got a call from actors in the Piya Behroopiya stage production who had gone there for a show. Two actors were stuck at Pampore on their way back from Pahalgam because of waterlogging. I told them to call up my cousin, Deeba, whose husband is the district collector of Ganderbal. While trying to coordinate this from Mumbai, I learnt that they had made their way to Srinagar through some back roads. Two days later, Deeba and her family were stuck at Rajbagh. They had to abandon their home and go to a relative’s place. Then, I got a call from my mother, who was wailing on the phone because she had got a call from Deeba who said they were going to die because the water had reached the third floor. Deeba had two young daughters, a frail mother-in-law, a diabetic father-in-law. After this call, there was no contact for three days.  I started following people on twitter who were reporting from the ground. I bought about 150 kilos of medicines and food. I couldn’t sleep for two nights.

When I landed in Srinagar, I got a call from Basharat Peer, the journalist and writer. He told me about a camp in Hyderpora where they needed relief supplies. The main road from the airport was washed out, so I took the back lanes that were dry and reached a camp near my house. Everybody and everything was out on the street. There were tents, doctors sitting under a flyover with two chairs and a table. The gurdwara was like overcrowded refugee camp. The Hyderpora relief camp was set up by local students who started to help without having any disaster management skills. They did what they could, learning on the job as it were. 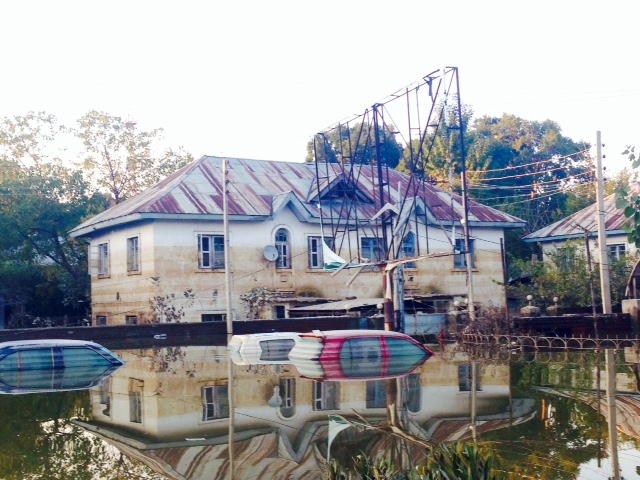 At the camp, I met Karn Kaushik, a mountaineer, and an Australian chap called Tim Carroll and two guys from Uttarakhand. They were planning to go climbing in Himachal Pradesh when they heard about the floods. They abandoned their expedition and landed up in Srinagar to help in whatever way they could. The guys from Uttarakhand had some experience with rescue work because of last year’s floods in that state. We started going out in boats to distribute supplies and help people stuck in their homes. There weren’t many people who could manoeuvre a boat. I could, since I had been taught swimming and rowing at my school, Tyndale Biscoe, the oldest in Kashmir. We used to have regattas every Wednesday there in the summers.

By the time I reached Srinagar, my cousin Deeba and her family had been rescued. They had gotten into an overloaded truck with 200 people on a dark night. My cousin’s husband managed to persuade the driver to take his mother in the front. My cousin, her husband and their daughters were hanging on to a nylon rope from one side of the truck, which was going through the water like a boat. The truck broke down after a kilometre. They walked through the water and took refuge in the lobby of a bank, since they had no access to a higher floor. But when the water came in there too, they had to break though a 14-foot high wall and fling people onto the other side, onto dry land, near Dal Gate bridge. She said throughout this ordeal, there were young men appearing and giving a helping hand. She called them angels in the dark.

My cousin later told me that she saw fear in her husband’s eyes, as well as his dilemma – who would he have saved? He had two ailing parents, two daughters, an uncle and an aunt. And he was the only one who could swim in the family. She tells me that she still can’t sleep at night thinking about his dilemma.

The main narrative in the national media for the first two days was “Army. Army, Army.” They reacted with 50 boats, which is nothing for a whole city. On the ground, it was something else. The first response was purely local.

People used makeshift planks, tire tubes, plastic water tanks cut unto half. I heard a story about a truck driver whose truck broke down, and who took out the tyres, made a raft out of them, and rescued 250 people. People flew in from abroad to save their families – somebody came from Turkey with a boat and went straight from the airport to rescue his mother. Another, a doctor, flew in from Norwich, England.

There were several stories of people with homes under water, who were helping others before their own families. My school friend, Tahir Ali Khan, rescued people from his neighbourhood while his own family was rescued by others. Everybody was taken by surprise, and the response was purely instinctual. Yes, people have suffered in Kashmir in various ways, and there is a feeling of being close-knit. When somebody dies, the whole neighbourhood turns out and the neighbours make the funeral arrangements. But something like this is altogether different. When one’s own family is under threat, to be selfless is something else. 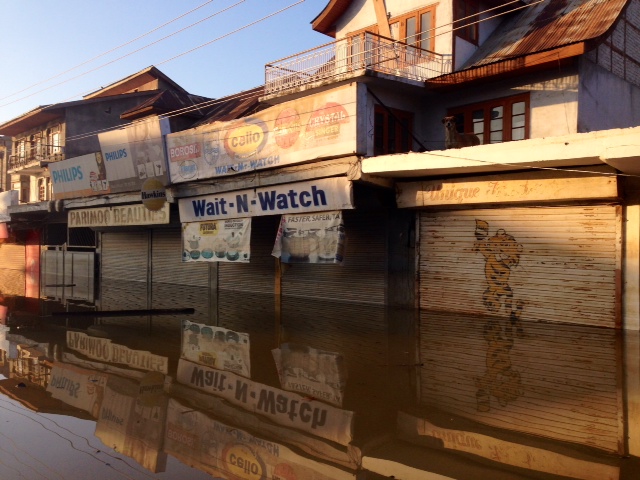 None of the rescue efforts happened in any organised manner. We used to get information about an address and investigate. Sometimes, we couldn’t find the place. Other times, there were people sitting on their terraces gazing at a lake of water who seemed calmer than the people on land. They didn’t leave their homes because they didn’t want to be homeless. The fear of not knowing where they were gong to end up made them stay.

The most striking image for me was from the Bemina neighbourhood. We rescued an old, frail, baby-faced blind man. He was sitting on a ledge. When we tried to take him out of the boat and put him on dry land, he refused to put his feet down clinging on to Karn. The blind man had lost his capability of recognising his surroundings by instinct.

When people lose everything, they try and save that one thing. A friend’s ailing parents took only their medicines and passports. My friend, a psychiatrist in England, had to bring clothes for them, because they didn’t have any. A nine-month pregnant woman, who is a doctor, took only her medical school certificates. A lawyer cousin hoped he could still retrieve at least some of his law books from his personal library. Another friend, the journalist Pervez Bukhari, rued the fact that out of his substantial book collection, he couldn’t save a 250-year-old handwritten manuscript of the Quran, which is a family heirloom. He remembers walking out of his gate, seeing a nine-foot wall of water in which a Scorpio car with its headlights on and its driver inside was being tossed around. He ran back in, but by then, the water had already flooded the ground floor. He and a friend rescued a calf from the third-floor window, which was floating in the water with just the whites of its eyes and its nostrils visible. They have kept him, and have named him Sultan. 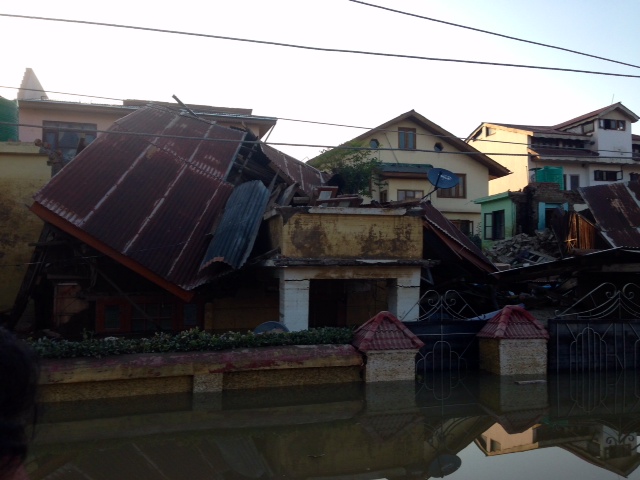 The last time there was a flood in Kashmir in 1998, some rural areas were affected.  But the sheer scale of this one…to lose a capital, a city, all manner of infrastructure. We had no reference point for anything like this, just like Bombay hadn’t seen anything like the 2005 floods. I can buy the point that government officials couldn’t help because they too were under water, but then you have to find a way to do something. You have to be seen to do something other than photo ops in an army helicopter.

There was major anger against what the media did for the first few days – saying that Kashmir should be grateful for the help it was getting. After that, I stopped watching the news. The security establishment has humiliated the population for 25 years and more, and now you are rubbing their noses in it because you saved their lives. You have been selling this tale to the world even before the flood, and you are now doing it more vociferously because of the change in dispensation at the Centre. The Army would have saved lives regardless of where they were because that is what they do. In some places, the Army needed rescuing themselves – in a village in Pulwama, which is known for its stone pelting, the villagers rescued 18 soldiers one night. You don’t hear stories like this in the mainstream media.

The water has started receding in some parts, but the worst is yet to come. Most of the hospitals are gone, including the diagnostic centres. A doctor friend asked how could they diagnose ailments if one can’t get a simple blood test done. 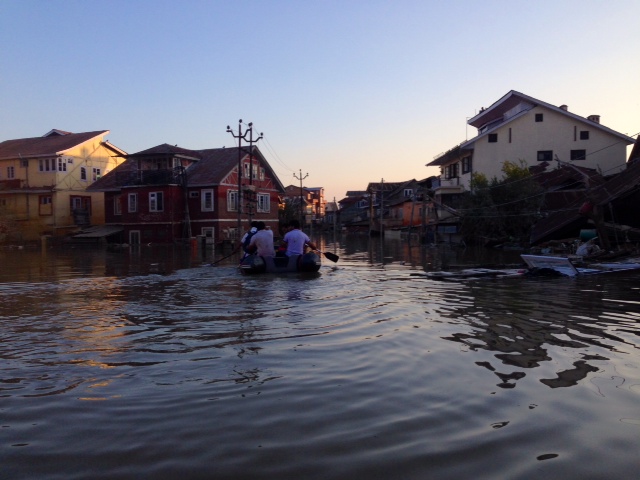 People are staying at other people’s homes. People are trying to clean out their homes, but how is it going to work? What happens to the houses that have been damaged and are unsafe for habitation? Will people have to abandon their homes and buy homes elsewhere? How will they do this? Will there be an evaluation of the damage done to the spine of the economy – the handicraft stores, the shawl sellers, the hotels? Most critically, how will the people who’ve lost their homes, survive the bitter winter?

On the flight back, it was as if the wind had been knocked out of me. I’d been running on adrenalin for nearly eight days. I was so drained that I fell into a deep sleep. It seemed meaningless coming back to Bombay.

As told to Nandini Ramnath.