Contribute Now
Ad
In 2001, when Reema Bora came as a new bride to Tarimasgaon village in Assam’s Dhemaji district, the river seemed very far away. Today a five-minute walk gets her to the riverbed. The intense rainfall in Dhemaji shapes the lifestyle of its people. Adaptation is essential. This is why, in 2009, with their community devastated by flooding year after year, Bora’s family decided to overcome an age-old cultural inhibition: they decided to build and live in a “chaang ghor”, or a house on stilts.

Bora is Assamese, while the chaang ghor is typical of the region’s Mishing community, who originally inhabited the mountains of Arunachal Pradesh. The Mishings came down to the plains around the 14th and 15th centuries, and though they were nomadic, they usually made their lives near the river. The chaang ghor allowed this riparian community to adapt to the moods of the river. It was only in the 18th century that they began to create settlements and cultivate crops. Today they live across Assam’s riverine landscape, particularly in the districts of Dhemaji and Lakhimpur, and on the river island of Majuli. 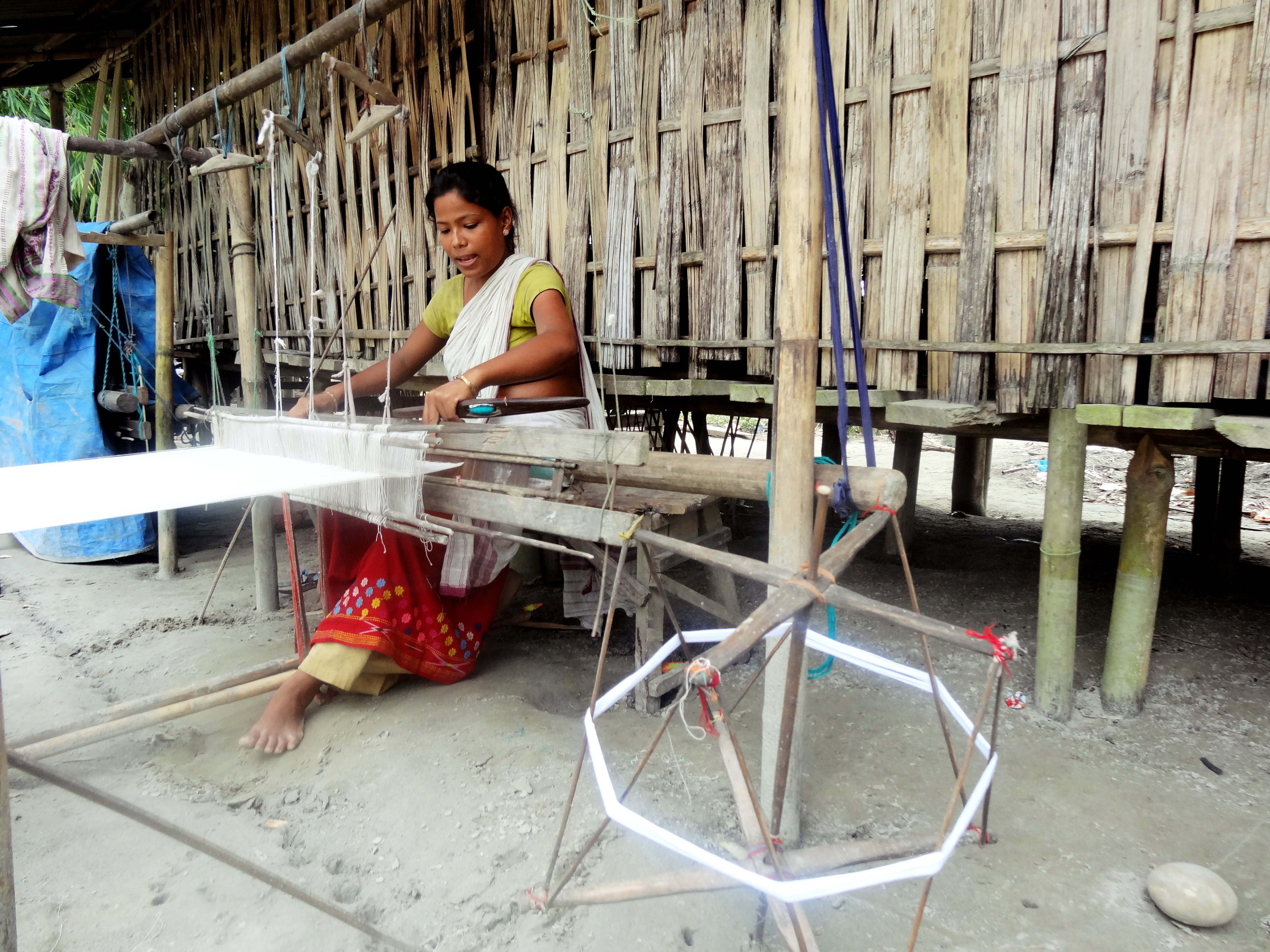 Reema Bora's sister-in-law Pinkimoni works on the weaving machine in their courtyard in Tarimasgaon.

A traditional chaang ghor has bamboo stilts holding the house at least three feet above the ground. A bamboo ladder takes residents into the house. Cattle, pigs and chicken are bred in the space below the house. Often the animals are visible from the floor above, through the small slits between the bamboo floor. Today, the bamboo stilts and ladder are often replaced with concrete counterparts.

The roofs are usually made of khair, a type of grass that keeps the inside at a comfortable temperature in both the summer and winter. Today, however, because khair is not easily available, expensive and needs to be replaced every few years, people usually opt for tin roofs.

Bora’s family is one of several non-Mishing families living by the Brahmaputra and its tributaries that have taken to the Mishing tradition as a key adaptation tool in the face of climate change. Devastating floods have been hitting districts across Assam with increasing regularity. Heavy rains in Arunachal Pradesh, for just one week in August, breached an embankment on the Jiadhal river and left almost all of Dhemaji submerged.

Since May, 23 of Assam’s 27 districts have been affected by floods, claiming 68 lives.

Bora’s family has also been hurt by siltation caused by the floods, which have covered their green carpet of land with one feet of sand. This severely inhibits farming. “Until about two years ago, we used to sell vegetables in the market, but now we are having to buy them,” she said. This is why, she said, building their house as a chaang ghor was practical, though people now assume they are Mishing, which is a source of discomfort.

According to Chandan Kumar Sharma, a sociology professor at Assam’s Tezpur University who has written books on both the Mishing and Assamese communities, Hindu society in Assam always looked down upon tribal communities. “When they settled in Assam around the 18th century they took to agriculture,” he said. “Their restricted mobility exposed them to the Assamese Hindu caste system, which allowed for some detribalisation.” 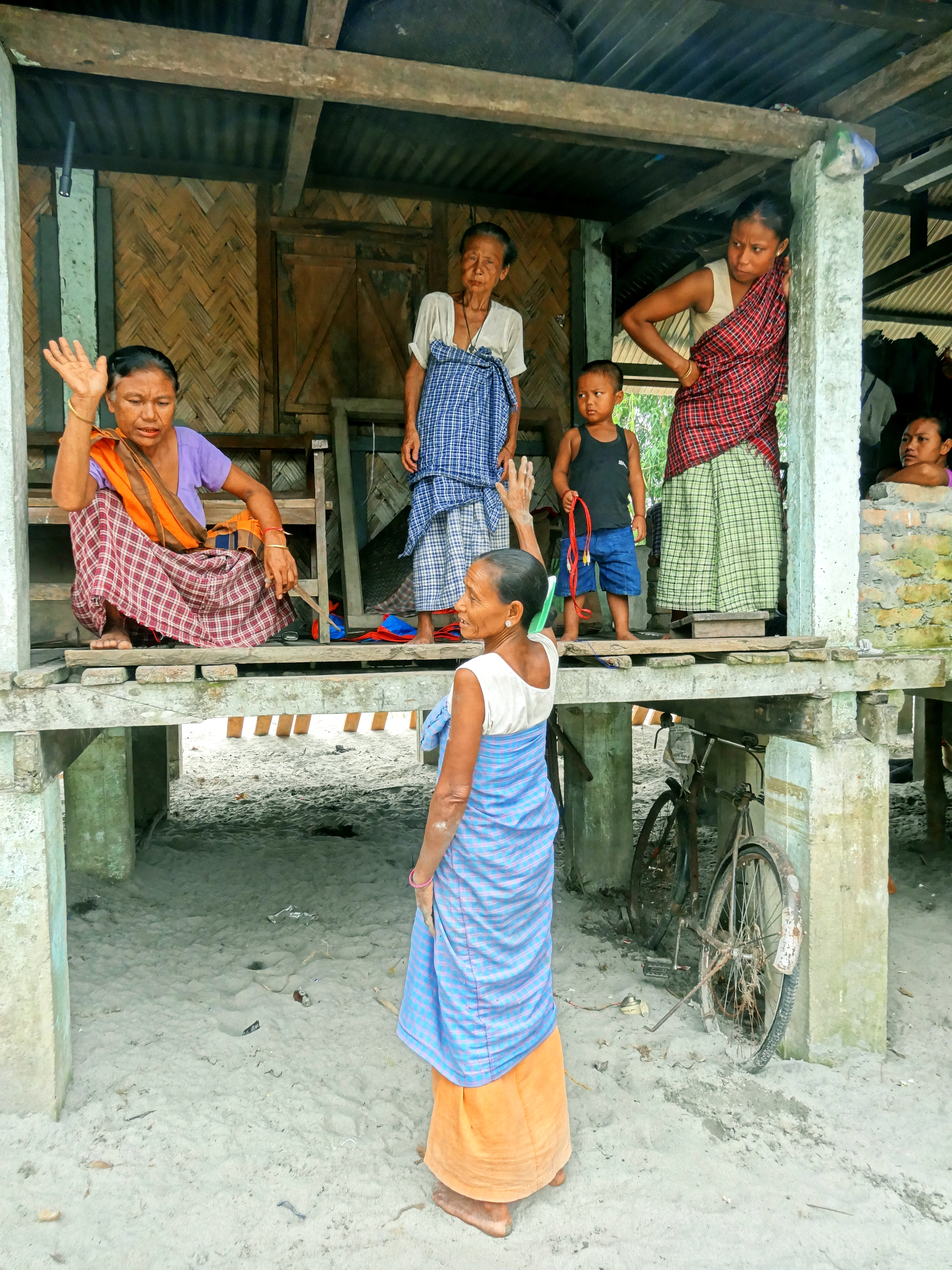 The Mishing community is also gaining acceptance because of its emerging middle-class members and the fact that some of its food habits have been adopted by other communities. For instance, as more Assamese eat all forms of meat, "they no more look down upon the Mishing as the pig-eating people", Sharma said. Against this backdrop,  the adoption of the chaang ghor by other Assamese communities will increase, he said.

The Rural Volunteers Centre in Dhemaji has been working in flood-affected areas of the district for almost two decades, especially in developing an early warning system for floods. Luit Goswami of Centre is convinced that adaptation is the only viable survival strategy, given the Indian government’s upcoming hydropower projects in the area, which could cause further floods downstream.

“People here are able to face disasters unlike the urban folks,” Goswami said. “In rural areas, the chaang ghor makes people resilient during the floods. But Assamese remain resistant to building chaang ghors, because they do not want to be viewed as Mishing.”

Krishna Chetri converted his home, in Akajan in Dhemaji district, into a chaang ghor in 2006. This year, the actually river shifted farther away from Chetri’s village. But elders know that the river will return in the next decade or two, perhaps even closer. Though Chetri wanted to build a concrete chaang ghor, with only the pillars holding up the house, he had to relent to pressure from older members of his family, who did not want a house like the Mishings.

“They wanted to keep our culture intact, by having a house that had a proper base,” Chetri said. “So our house is built four feet above the ground, and instead of an empty space below to allow the water to flow, it is filled with sand. Other Assamese people are also building similar houses, and are creating a separate route for the water to flow. The attachment to culture is stronger than practicality.”