Oct 20, 2014 · 11:44 am
Praveen Khangta and Gilles Verniers
The rise of the Bharatiya Janata Party is the political story of the year. The recent state elections in Haryana and Maharashtra have just confirmed it. The BJP has been able to repeat its Lok Sabha performance of May, even consolidating some of its positions in a context of intense competition between solidly entrenched national and regional parties.

The BJP's rise in Haryana is particularly spectacular. From the position of distant third in 2009, with four seats for 9.04% of vote share, the BJP succeeded in securing the majority of seats (52%) with its highest-ever tally of votes (33.2%). To measure the distance covered: in 2009, both Congress and the Indian National Lok Dal had between them 71 seats out of 90 and about 62% of the total vote share.

Interestingly, there isn’t much difference in the party-wise vote share between the last general elections and the assembly elections. That observation is also valid for the Congress and the INLD. 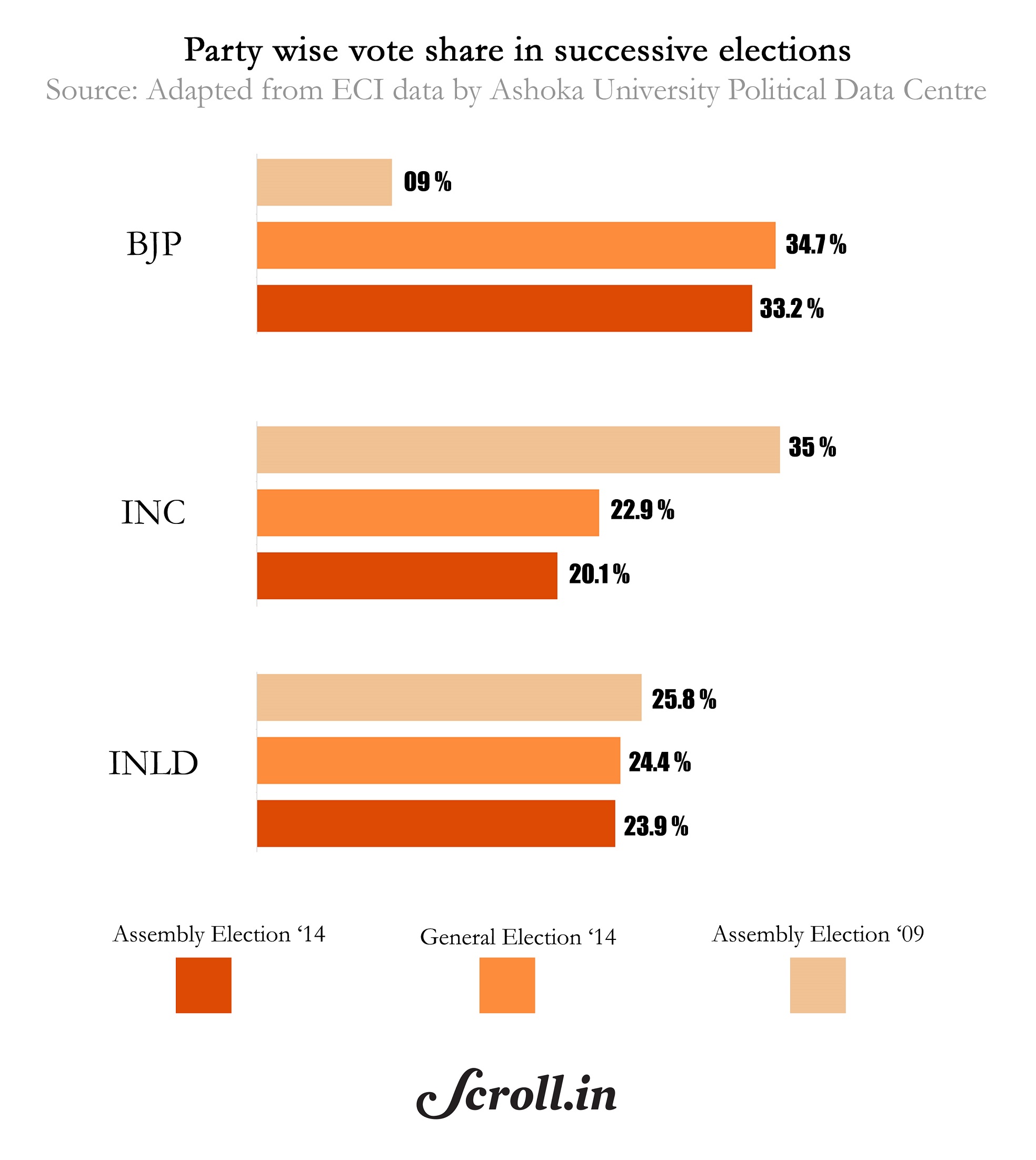 The amplitude of victory margins reinforce the decisive character of the BJP’s victory. The BJP won 28 out of its 47 seats with a winning margin greater than 10%, a remarkable feat considering the four- and sometimes five-corner character of the competition. The fact that the Congress was in the same felicitous state five years ago reinforces the strength of the vote swing that brought the BJP to power in Haryana for the first time. 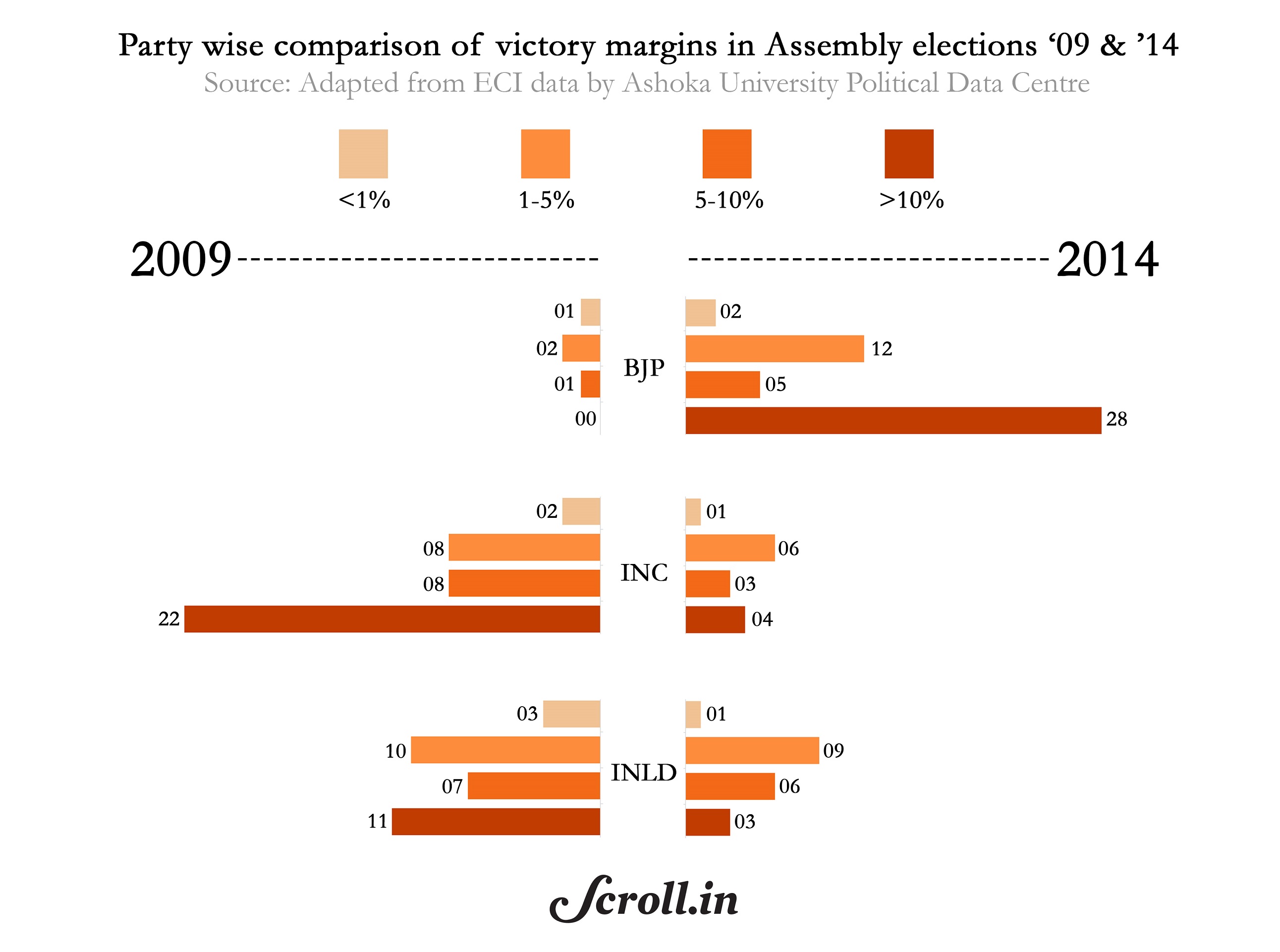 Compared to 2009 Congress’ decimation in Haryana looks complete both in terms of seat and vote share. It has even been overshadowed by the INLD, a reputedly spent force in the state. The Congress came second in only 19 constituencies compared to 40 second positions of the INLD. It is a far cry from its 2009 performance, where not only did the Congress win 40 seats, it also came second in 42 other constituencies.

Later surveys will probably reveal  the extent to which the Congress lost its support among the Jats – a source acquired at the expense of the INLD starting from the mid-2000s. With 28% of the total population and above 40% of the seats under their control in 2009, the Jats call the shots in Haryana elections. In 2014, both the BJP and the INLD competed for the crucial Jat support. But the overtly Jat-party image of the INLD prevents it from gathering a broad support base, a strategy that the BJP could implement in the absence of the Congress party, the former “rainbow party” in the state.

The BJP’s gain has been at the expense of both INLD and Congress, the latter bearing the brunt with 22 seats being lost to the BJP. The Congress could retain only 12 out of the 40 seats that it had won in 2009, with two and one seats gained from the INLD and the BJP. The INLD lost heavily to the BJP (17 seats) but somewhat compensated with a five-seat addition from the Congress.

Delhi elections: Will the Capital bring back AAP or reward BJP for its polarising campaign?