Oct 27, 2014 · 05:38 pm
Nishita Jha
Caged and uneasy, hundreds of chickens sat huddled in Trilokpuri’s abandoned butcher shops on Sunday. The apparent calm in the East Delh neighbourhood was the result of section 144. Any gathering of more than ten people was immediately broken up by gangs of policemen, men from the Central Reserve Police Force and Rapid Action Force personnel patrolling the area. “Ghar ja ke baat karo” –  go to your homes and talk, was the official instruction.

Yet the narrow by-lanes were buzzing with conversation and complaints. Saris and salwars were lifted to show evidence of injury. Lists of names were passed around – of boys in police custody, men responsible for damage to property and person, and men to call for help. In Block 20, where the trouble first began, a yellow sign floating above a diminutive idol of Ma Bhagwati urged believers to assemble in large numbers to show their devotion. Swinging a lathi through the air, Constable Ravi Bahujan said, “Yeh saara maamla afwah se shuru hua hai”, all of this began with a rumour.

With each passing day, it is becoming harder for the people of Trilokpuri to remember how the violence actually began. While both Hindus and Muslims agree that the final trigger was a drunken brawl near the makeshift Mata ki Chowki, no one quite understands how this turned into a riot spanning an entire neighbourhood. For one, alcohol-infused fighting is hardly unusual in Trilokpuri, where bags of spurious liquor can be bought for as little as Rs 10.

Secondly, the raucous group drinking near the goddesses’ tent, was by all accounts, a syncretic mix of Hindu and Muslim boys getting high together. Finally, the chowki itself, a temporary tent with huge speakers, an idol and a fake waterfall, is the newest member of a trinity in Block 20, where a mosque built in the 1970s, a decade-old Murugan Shiva temple and a recently built bright orange Hanuman have peacefully co-existed barely 50 steps away from each other.

Much of the explanation of the current violence is based on ideas of sanctity and defilement, familiar bogeys in times of communal tension. The small stretch of land between the mosque and the chowk was once the site of a public urinal, finally demolished when surrounding homes turned into pucca structures with private toilets. By mutual consensus, this empty patch of concrete was being used as a dumping ground by the residents of Block 20, until the Swachh Bharat Abhiyan convinced people to clean up their neighbourhood.

Not satisfied with merely wielding a broom as the prime minister had suggested, a local group of Hindus decided that to ensure the space stayed clean, they should build a “Mata ki Chowki” there. As a result, this good samaritan argument for hygiene is occasionally laced with bigoted statements like “We just want our Muslim brothers to stay healthy, why do they like living in filth so much?” While plans are afoot to build a more permanent structure, perhaps a Kali Mandir, at the same spot once the Mata ki Chowki is dismantled, neither community has managed to come up with any alternative means to dispose of the trash that once existed in this newly-sanctifed zone.

Around Dusshehra, when plans for the chowki were still under way, a group of Hindu residents approached Trilokpuri’s ex-MLA, the Bharatiya Janata Party's Sunil Kumar Vaidya for assistance. “Vaidyaji assured us that we would get permission this year,” said Sujata, a 26-year old housewife from Block 20. Trilokpuri’s present MLA Raju Dhingan, is a member of the Aam Aadmi Party, a party that Sujata herself had campaigned for in the past – but it is Vaidya, the gathered women said, who was the go-to man for all their problems now. “He’s got all my children admitted into schools,” said one.

“If it weren’t for Vaidyaji, the police would never have helped us,” said Surender Singh, a mechanic who has been providing tea and food to policemen stationed outside the chowki for the last three days. It was also Vaidya, another young man revealed, who first told him to upload photos and videos of the stone-pelting from Diwali night, to “gather support from outside” – a move that was thwarted by bad internet connectivity once the violence began. “I’m not sure if I’ll still upload them,” he admitted privately, “chauraasi ki tarah na ho jaye.” I don’t want things to become like '84.

The spectre of the anti-Sikh riots from 1984 still looms large in Trilokpuri, which was one of the worst-affected sites at that time. Apart from being a constantly-evoked threat during rioting, it also serves in moments of quiet, as a warning, a not-distant-enough reminder of what could be at stake if neighbours continue to turn on each other. As of Monday, at least three stores in the intersection of Blocks 27 and 28 – areas with a Muslim majority, referred to by some as “mini-Pakistan” – had been set ablaze, even though the police was stationed meters away from the fires.

Muslim families, who comprise nearly 20% of Trilokpuri’s population, have been sending young women and children away to relatives in other parts of the city, fearing more violence in the coming days. Several young Muslim boys have been taken by the police and are being held in custody without explanation to their families.

“They set fire to their own shops to claim insurance, and now they’re planning something worse,” said Deepu Kalia, a 25-year-old driver who suffered a head wound from the stone-pelting on Diwali night, “Why would they send their women away? We haven’t hidden our families, we have nothing to hide”. Meanwhile, with the penultimate night of the Ma Bhagwati Vishal Jagran, and Muharram both barely a week away, the streets of Trilokpuri are still rife with rumour. 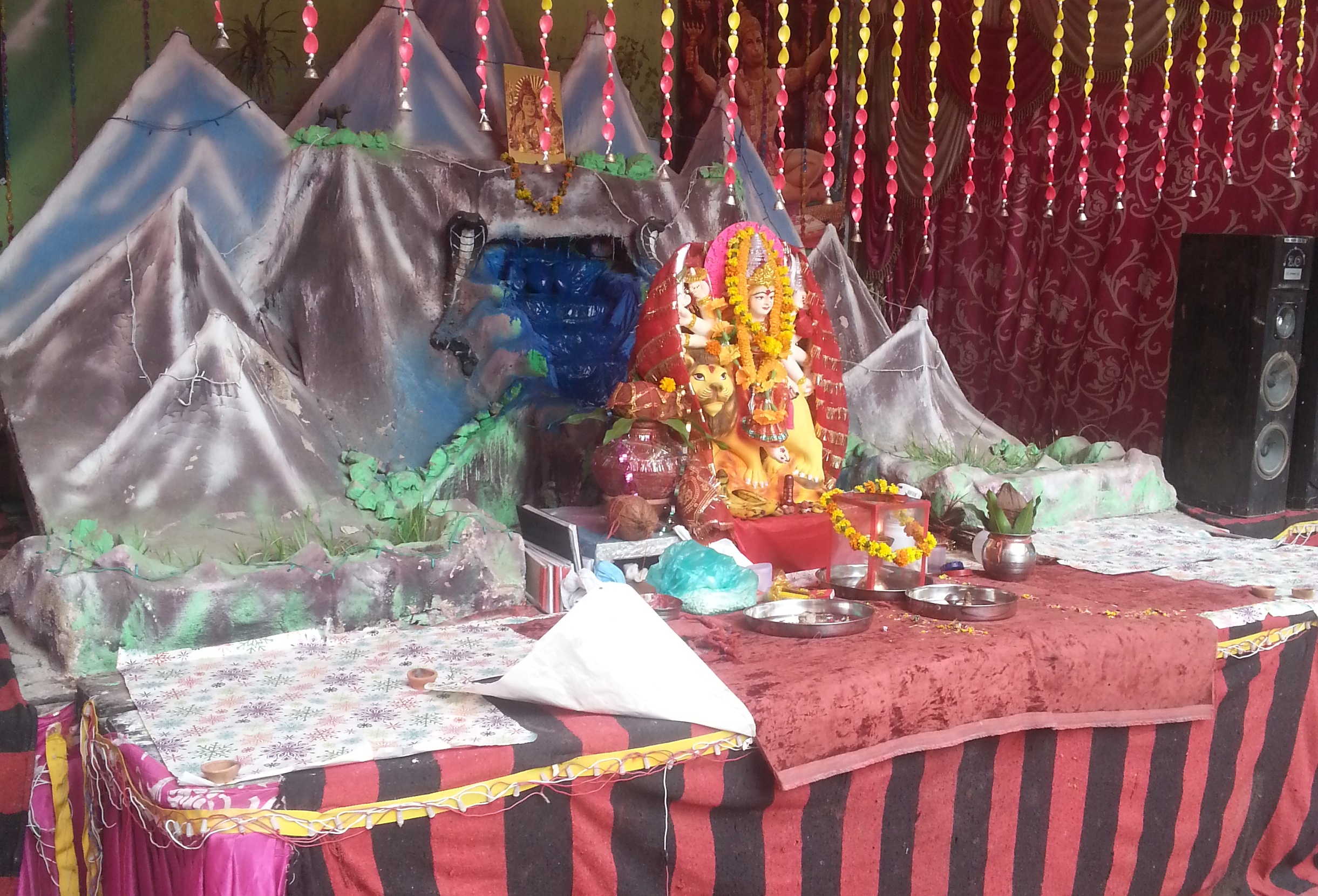