Contribute Now
Ad
On November 25, at 11.30 am, two bulldozers, 40 policemen and a number of forest officials arrived at Israil camp in Rangpuri area in south Delhi. They gave 10 minutes’ notice, by the clock, for the residents to vacate their homes. And then the demolitions began.

Over the next six hours, the bulldozers razed 400 houses along with the belongings inside, leaving 2,000 people homeless. These people, mostly migrants from Uttar Pradesh and Bihar, work as daily wagers, carpenters, drivers of autos and taxis, housemaids, gardeners, construction workers, private security guards, street vendors in the posh Vasant Kunj neighbourhood. While cold weather and homelessness claimed the life of 70-year-old Noor Mohammad, the rest of them are still struggling.

“I have been living here for 14 years,” said Rampal, a gardener. “I have an electricity bill, voter card, and Aadhaar card with the address of my house that was razed.” His wife Sheela works as a housemaid. “We came from Badayun to Delhi, so that our children can study and we can find work. How will the children study now?”

The demolitions, residents say, followed months of attempts to polarise them along communal lines and might have been carried with an eye on the upcoming Delhi assembly elections.

Israil camp is named after Israil Pradhan, a local strongman. About a third of its population is Muslim and the rest Hindu. In the 1950s, the Rajokri stone-crushing belt for the Aravalli stone quarry existed in the vicinity. Mining contractors would settle their workers around here. Israil, who was a driver engaged in transporting stones from one such quarry, set up the “camp”. 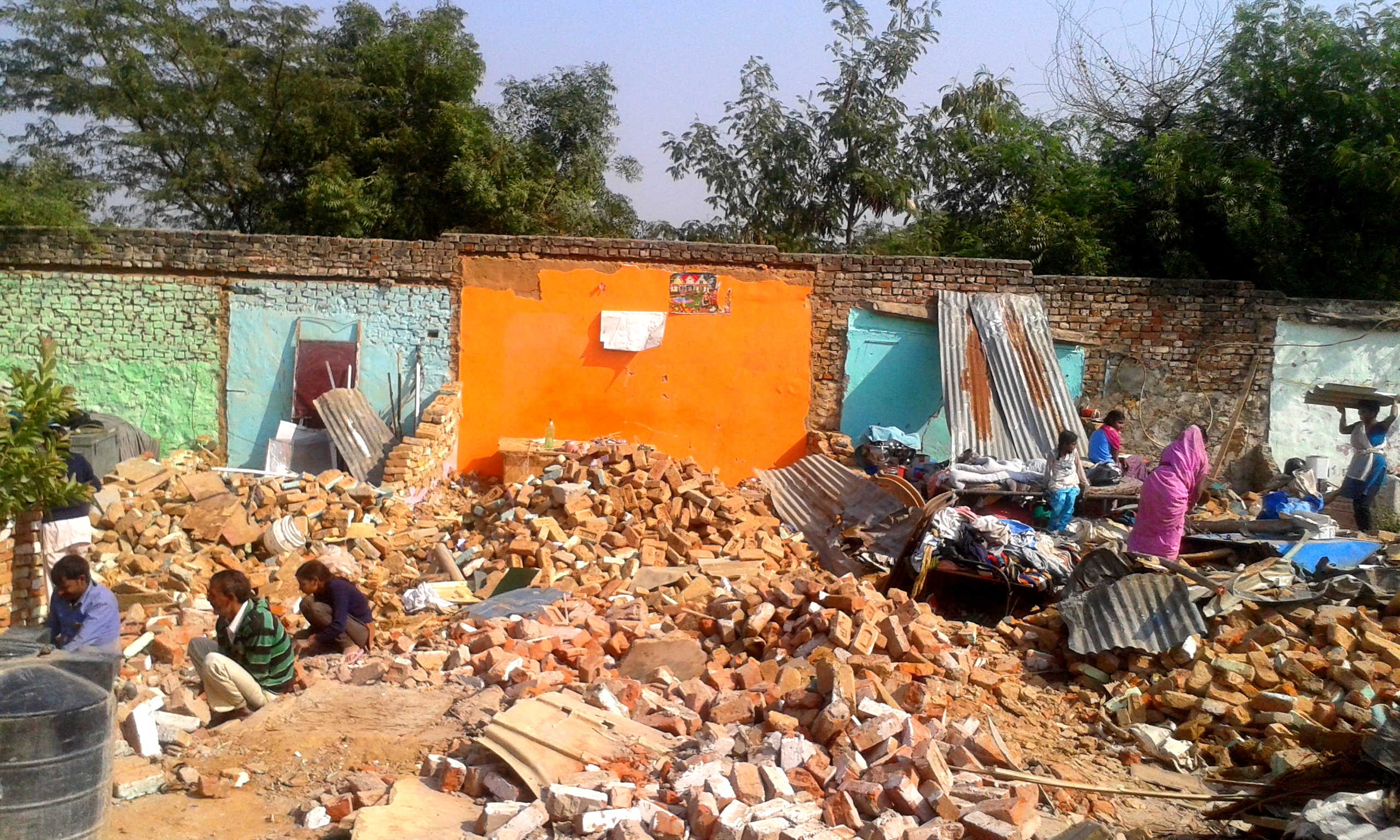 Since 2000, the risk of demolition has run high, which resulted in a court battle with the Delhi Development Authority. After the intervention of the National Human Rights Commission and Supreme Court, the 50-year-old settlement was partly legalised.

“Officials claim that a proposed metro project and an eight-lane highway to Gurgaon have been approved through Rangpuri,” said Naresh Srivastava, who has lived here for 20 years. The Delhi Development Authority floated a tender on November 25 for a boundary wall to limit the remaining settlement.

The large ground at the entrance of Rangpuri has a big Hanuman Mandir. It was recently taken over for Rashtriya Swayamsevak Sangh shakhas. Nagendra Upadhyay, the RSS member who presides over the daily shakhas, is also the General Secretary of the Resident’s Welfare Association of the Malikpur Kohi in Israil camp. He manages the Hanuman temple as well.

“The shakha people stopped the policemen from torturing us,” said Parvati, a resident of 20 years who works as a domestic help. “But instead, the shakha people torture us and extort money.”

This assertion was supported by Jogeshwar Pandit, the priest of the Kali mandir in Israil camp, which was also demolished. “All this trouble began since the RSS shakhas started,” he said. “Upadhyay objected to the Kali mandir. He would force us to give all the donations for the Kali temple to the Hanuman temple. In the Hanuman temple, people from lower castes were not allowed. At the Kali temple, people across castes and religions were welcome.”

Residents see political machinations behind the demolitions. “Communal tensions are being provoked since the Delhi elections were announced,” said Rajkumar, a construction worker.

On May 27, Upadhyay wrote an official letter to Lieutenant Governor Najeeb Jung, while marking a copy to Satya Prakash Rana, the BJP MLA from the area. The letter said, “Jhuggis are being sold illegally at a large scale. This is carried out by people from the Bangladeshi and Muslim community.” It added: “If this is not stopped immediately, a large Bangladeshi community will settle here. Since the area is close to the airport and the aeroplanes are really low while landing, there is a threat of a terror activity on the planes [sic].” Scroll.in possesses a copy of this letter.

On the same day, Rana wrote a letter to Jung, claiming that “some organized groups are settling on this forest land and immediate action should be taken to remove them”. Scroll.in has a copy of this letter too.

Residents claim that the attempts at stoking communal tensions in the areas had increased in the last three months. “Some people would deliberately ram their bike into my vegetable cart to instigate a fight,” said Saleem, a migrant from Uttar Pradesh living here for 12 years. “They would try to turn it into a communal fight, but I would simply fold my hands and apologise.”

Other residents tell similar accounts. “A public meeting took place in June objecting to the construction of a new room in the mosque, but we did not react,” said Usman, a cab driver who lost his home of 16 years in the demolition. However, repeated attempts at polarising the population on communal grounds failed.

Usman’s neighbour Vishnu said, “We were also called for such meetings to object to the mosque just after the recent Khichripur-Trilokpuri communal tensions. We don’t have enough time to earn money to make ends meet. Who cares about temple and mosque? In times of crisis, the poor helps the poor, not leaders.”

“We approached Rana [the BJP MLA} on the day of the demolition,” said Ramprasad, a street vendor whose house of 20 years was torn down. “He told us that since the majority of the area voted for the Aam Aadmi Party both in the Delhi and general elections, he could not do anything.” When contacted on phone, Rana said, “It is a forest department procedure. I am not involved in this.”

Forest officials too could not be reached for comment.

“We have been punished for being poor and not fighting in the name of religion,” said Raju, a construction worker. “Let us see what the Delhi elections have in store for us.”