Become a Member
Ad
On Wednesday, the government announced it would decriminalise suicide. It is the rational thing to do: after all, those who attempt suicide do so for lack of social, economic and emotional resources. It will also ensure that young Indians under stress are not punished for cracking. After all, India has one of the world’s highest rate of suicides among people aged between 15 years and 29 years.

Each year, between 30 and 40 people per 100,000 Indians aged between 15 and 29 kill themselves. This accounts for about a third of all suicides in the country.

India's suicides are a result of its traditionalist middle-income residents transitioning to an increasingly globalised landscape, experts say. One striking fact when considering the suicide deaths per 100,000 people of that age-group is that the figures are higher in the better-off southern states and the lowest in the Hindi heartland.

The strains are obvious from this chart. 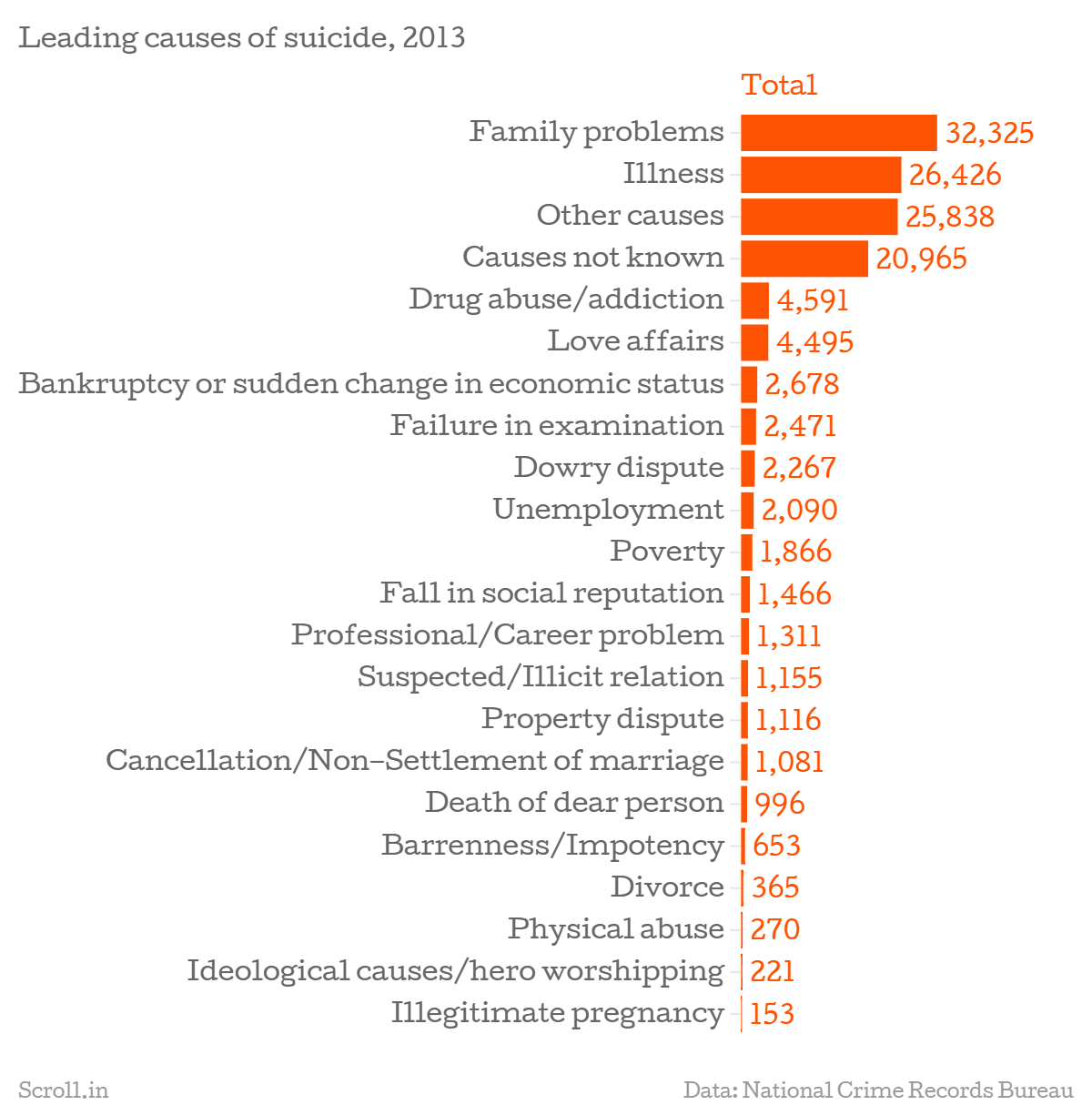 A common cause for concern is the pressure from parents to do well in the national board examinations, especially for Class XII, before finishing school. As scores in these exams often determine college admissions and subsequent employment opportunities, students aged 16-18 are often subjected to undue pressure at home to succeed. When they don't, suicide becomes a way out. In 2013 alone, 2,471 suicides were attributed to "failure in examination".

Moreover, the consequences of gender bias are among the leading cause of suicides among young women, say psychiatrists such as Rajiv Radhakrishnan of the Yale University School of Medicine and Chittaranjan Andrade of the National Institute of Mental Health and Neurosciences, Bengaluru.

Independent decision-making, wanting to postpone marriage and premarital sex are some factors that clash with traditional parenting styles, while physical and mental abuse and mental disorders could exacerbate suicidal tendencies.

A study conducted in Goa in 2008 studied to what extent these factors were more prevalent among women than among men.

The same study found that independent decision-making, rural residence and premarital sex were the strongest precipitators of suicidal tendencies.

Among men, however, the stories are different. As data from the National Crime Records Bureau shows, suicide is more prevalent toward south India, which has better economic indicators than the rest of the country on average. 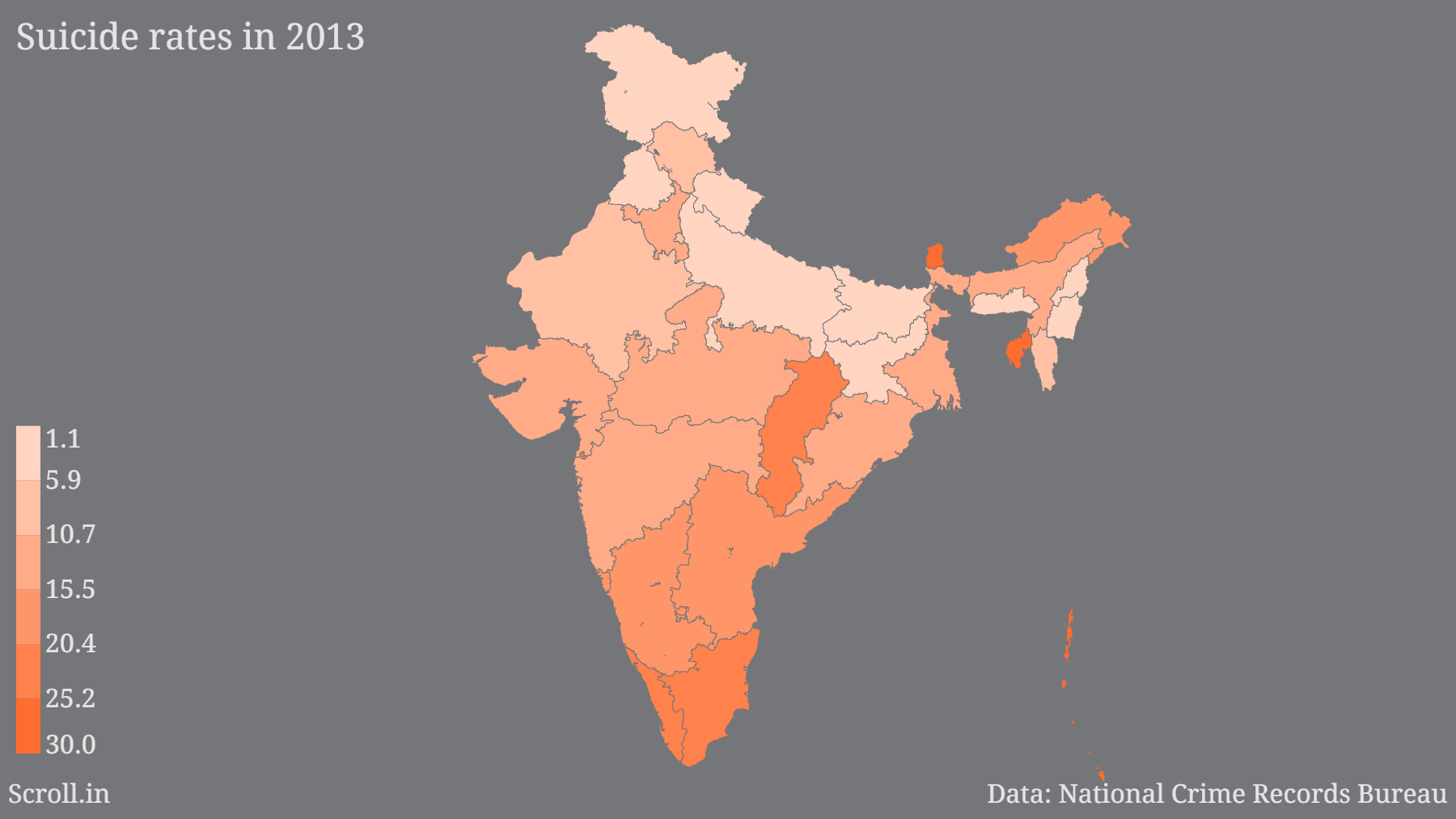 According to data from the NCRB for 2013 and a World Health Organisation report for 2012, alcoholism among men between the ages of 15 and 59 years and suicide rates among men of the same age group rise and fall together. However, the data sets do not have an age-wise breakdown, so this covariance could be no more than indicative of other issues.

The same WHO report, released in September, noted that 75% of the world’s suicides happen in low- and middle-income countries. It also says that  “suicide rates are highest in persons aged 70 years or over for both men and women in almost all regions of the world”. But this is not true for India.

There is an immediate explanation for why India’s elderly have it better than India’s young. Taking care of the elderly has been an important part of Indian familial traditions. Their needs are widely recognised and addressed, and they enjoy a measure of respect by virtue of their age.

The clash of values within families is an important factor for young people in their lives. As young Indians becomes more progressive, their traditionalist households become less supportive of their choices pertaining to financial independence, marriage age, premarital sex, rehabilitation and taking care of the elderly.

It is probably for these reasons that, according to the NCRB, the most common reason cited for a suicide was "family problems".