Contribute Now
Ad
On December 12, the second edition of India’s biggest and most important art exhibition opened in Kochi. The Kochi Muziris Biennale is the brainchild of two Kerala-born, Bombay-based artists, Bose Krishnamachari and Riyas Komu, who battled the southern state’s infrastructural and labour problems to produce a world-class inaugural display in 2012, sited mainly in a group of run-down buildings within the heritage precinct of Fort Kochi.

The word “biennale” refers to large exhibitions held every two years, and is borrowed from the Italian, because the world’s first such show was held in Venice in 1895. The Venice Biennale remains the most prestigious event of its kind, but there are now over 200 mounted across the globe. Originally devoted to conventional painting and sculpture, biennales today focus on newer forms such as video, performance, and installation art. Being non-commercial, they encourage experimentation, and have become prime venues for artists to imprint their name on the art world’s consciousness.

Biennale stalwarts habituated to pristine, climate-controlled, dehumidified exhibition rooms were charmed in 2012 by KMB’s picturesque location, rough-and-ready display, and sensitive grouping of artworks. The fact that it was an artist-run initiative only added to its allure. Curators (people who conceive of exhibitions and select participating artists) often over-intellectualise their choices, producing shows which appeal mainly to fellow curators while turning audiences off. Last year’s Berlin Biennale was an excellent example of this unfortunate trend, an anaemic presentation drained of attentiveness to colour and form.

By contrast, Jitish Kallat, the curator of KMB II and one of India’s leading artists, has mixed mediums and styles together in a way that is intellectually challenging as well as aesthetically satisfying. I came away from Berlin without having encountered a single memorable sculptural work  whereas since I left Kochi Mona Hatoum’s “breathing” lightbulbs, Nataraj Sharma’s monumental machine-sculptures, Sahej Rahel’s weird geometrical clay forms, Sumakshi Singh’s illusionistic room that makes viewers part of a giant painting, Prajakta Potnis’s delicate impressions of kitchen implements on brick, Valsan Kolleri’s upside-down yogi and laterite sundial, Gulam Sheikh’s multi-coloured acrobats, and half a dozen other artworks have returned insistently to mind.

Kallat has chosen substantial, high-quality creations, arranged coherently around the theme Whorled Explorations. On the one hand, the concept connects with Kochi’s history as a centre of maritime trade. On the other, it relates to differences in physical scale from atomic particles to galaxies. The latter theme has long preoccupied Kallat, who linked body and cosmos in his own artwork through a series of photographic prints in which bitten-off rotis take the form of phases of the moon.

Putting on a show of this magnitude required huge sacrifices from the three artists at its helm and their committed team. Not only have they produced the main biennale, but also subsidiary events like a Students’ Biennale, a Children’s Biennale, and an ambitious film festival. And there lies the catch.

A month before the show opened, the organisers were in a state of panic. Kerala’s government had not coughed up the money it promised, and suddenly there wasn’t even enough cash to ship artworks to India. An urgent fundraising effort staved off disaster, but it is worth asking why it was needed in the first place. The inaugural biennale, after all, had faced exactly the same problem. On opening day in 2012, many of the works were not up, leaving a number of artists distraught, and viewers disappointed. Kerala’s administration provided a total of Rs 9 crore for KMB 2012. Although much of it was provided late, it’s a substantial amount by any standards. Couple that with backing from DLF, BMW and other sponsors, and there really was no reason to land in the same soup again.

I confess I’ve curated shows where not all works were up at opening time. In fact, for the very first show I conceived back in 1998, Bose Krishnamachari brought in his contribution an hour before Charles Correa was to deliver the inaugural address, and proceeded to hammer it in place and affix bulbs within it. He switched on the improperly attached lights and blew out power in the whole complex just as Correa was being handed the mike. Krishnamachari  invariably bites off more than he can chew, but in doing so chews more than most people will ever bite off. That’s the way he’s always been, and people in the art world love him despite that, or perhaps because of it. Fumbling a biennale budget, however, places dozens of other artists in uncomfortable positions, and is difficult to rationalise. It seems simply wrong to have expanded the scope of KMB so much instead of putting together a single, compact exhibition.

Janine Antoni, Mark Formanek, Katie Paterson, Rivane Neuenschwander, Wendelien van Oldenborgh, Khalil Rabah, Chen Chieh-jen, Akbar Padamsee, Ho Tzu Nyen, Peter Rosel, Wim Delvoye and William Kentridge were among the artists whose work was not ready to be displayed on opening day. Virtually all those names are of foreign artists, and almost all work in video. The Indian artists chosen came to Kochi early, often at their own or their gallery’s expense, and ensured their pieces were properly installed, though they could do nothing about stiflingly hot exhibition rooms and cables running higgledy-piggledy across floors.

Foreigners were left stranded by delayed shipments or inadequate technical help. That the work will all eventually go up and the biennale lasts for 108 days is small consolation, because most luminaries attend only the opening weekend. The very first thing a big contemporary exhibition needs is an uninterrupted power supply with minimal voltage fluctuation. If that can’t be assured, there’s really no point even selecting video art, because each piece will go off constantly and require restarting.

I hope KMB’s advisors hammer home the point that the next edition needs to focus on timely implementation above all. Some kind of transparency in accounting is also overdue, so people understand where all those public and private funds are actually going. Patrons and artists have given generously of their time and money, but donor fatigue is setting in. I’m pretty sure few people will agree to bail out KMB if there’s another crisis in 2016.

Give the odds, Kochi Muziris Biennale 2014 is a triumph. But, as King Pyrrhus said after defeating the Roman army at Ausculum, “If we win another such battle, we shall be totally lost.” 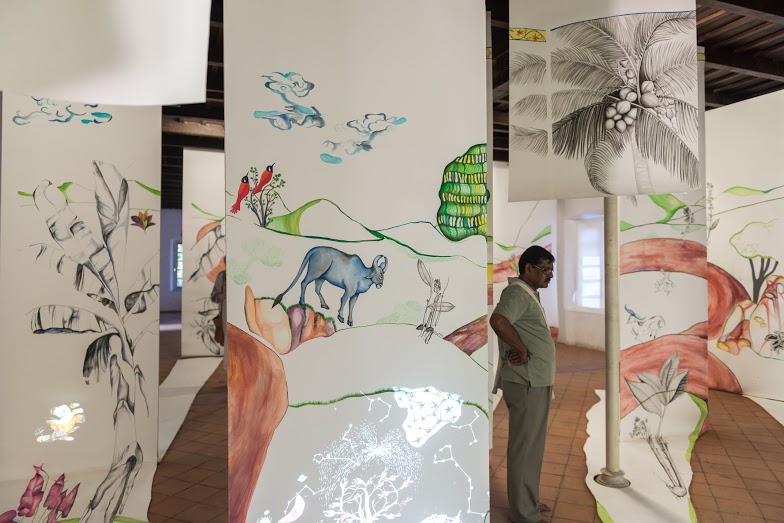 Sumakshi Singh’s ‘In, Between the Pages’. 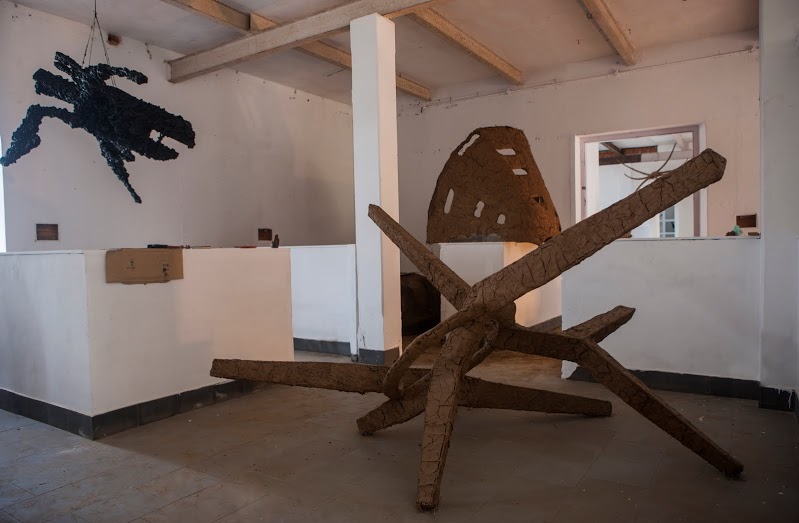