Contribute Now
Ad
Controversy seems to follow Bharatiya Janata Party leader Subramanian Swamy. A few days ago, the rabble-rouser, who has a huge following on the internet, threatened to sue Facebook for allowing popular parody accounts that had been making fun of him. Saying this was the work of “desperate Congis and Aaptards”, Swamy insisted Facebook would have to act or face legal notice.

On Friday, a page bearing the title Dr Subramanian Swamy, and having his picture as its profile photo, did disappear from Facebook. There was only one problem: this wasn’t the parody account that many believe Swamy was complaining about, which actually uses a slight misspelling of his name and clearly identifies itself as satire. That page remained up.

Instead, Facebook appeared to have taken down the “real” Subramanian Swamy page, instead of the parody. Social media immediately erupted in laughter, presuming that Facebook had accidentally taken down Swamy’s own account instead of the parody ‒ a fact made funnier by the belief of many that it’s hard to tell the difference between the actual Swamy and all of those trying to caricature him.

Swamy asked Facebook to delete a parody page of him and FB deleted HIS page!!! :D This is too epic for words || Swami is his own best parody — Wildcard Vidyut (@Vidyut) December 19, 2014

In reality, though Facebook did no such thing. The hullabaloo over the Swamy parody account had prompted the social network, which has often insisted that it only accepts real accounts and takes impersonation seriously, to look at all accounts purporting to represent Swamy.

@AjitsinhJagirda : I have no Facebook. But youngsters in US in my name are publicising my activities. Opinions are theirs — Subramanian Swamy (@Swamy39) December 5, 2014

The Dr Subramanian Swamy account that was taken down was not an official one run by the BJP leader, but a fan page run by the ShankhNaad team. Swamy has endorsed this account in the past by linking to it on his twitter account, all the while insisting that those opinions were not shared by him.

Swamy himself has no account on Facebook. The ShankhNaad page also never pretended to be Swamy himself, but the social network occasionally checks to ensure that fan accounts make it clear that they are not representing the person before allowing them to go up again.

The parody account, meanwhile, after briefly appearing to be deactivated by its owner, ended up having a field day at the news. Sarcastically calling it #ShouryaDiwas, the account put up a series of posts poking fun at Facebook for what most people thought was a mistake. 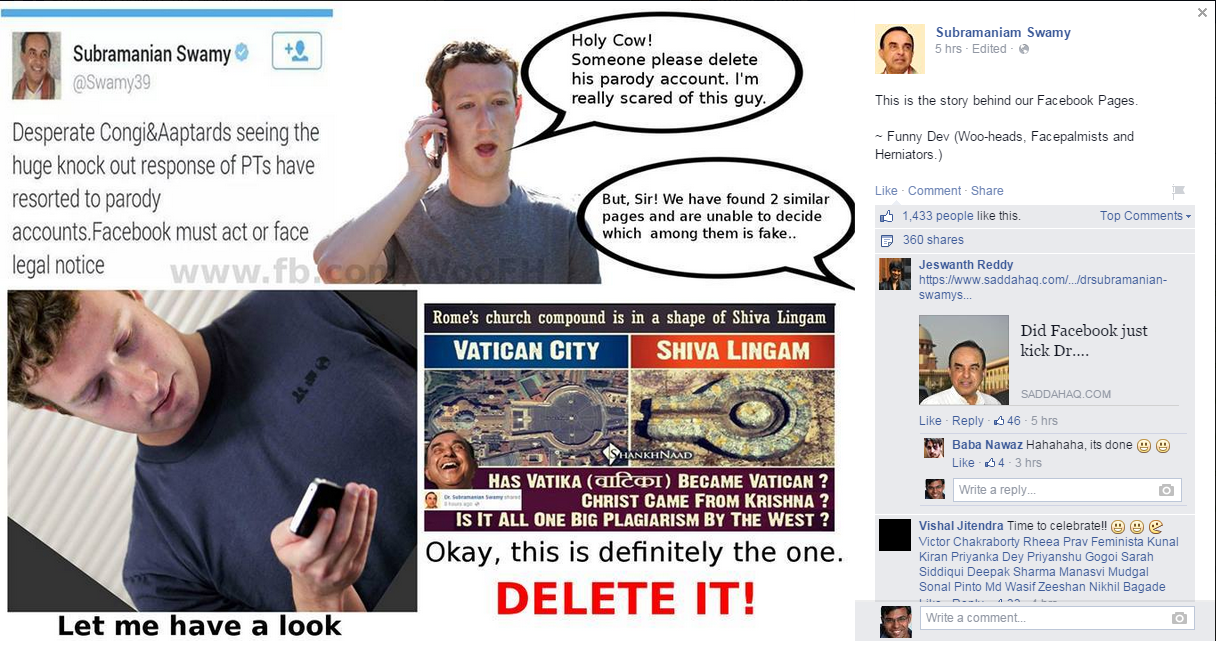 Update: Facebook has added an official statement about the situation, confirming that Swamy has no official account on the social network and that they police any pages that pretend to be other people.

"Mr Swamy does not have a verified account on Facebook. Furthermore, Facebook Community Standards explicitly state: On Facebook people connect using their real names and identities. We ask that you refrain from publishing the personal information of others without their consent. Claiming to be another person, creating a false presence for an organization, or creating multiple accounts undermines community and violates Facebook's terms," a representative of the social network wrote, in a statement.

Meanwhile, the parody page now has the word "Unofficial" prefixed to the name. 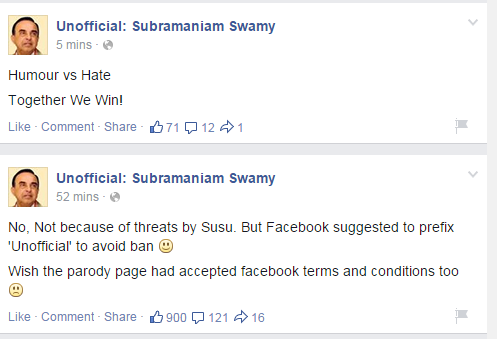