Contribute Subscribe
Ad
This time around the family took no chances. When the shells began exploding in Chiliyari early in January, Surekha Kumari fled with what was left of her family to the nearest town.

Chiliyari is a border village in Samba district in Jammu and Kashmir. In October 2014, when an 81mm mortar shell ripped through its mud and brick homes, it shattered 10 years of peace on the international border between India and Pakistan, and left Surekha’s mother and grandparents dead.

Since then, border villages like Chiliyari in the districts of Samba, Kathua and Jammu have been shaken by periodic shelling. But the fire grew intense in the first week of 2015, triggering an exodus from the villages, and forcing the administration to close down schools and colleges.

Surekha, 16, is preparing for her Class X board exams. When the shells fell on her house in October, she escaped because she was away visiting her aunt in another village. I met her in November, exactly a month after the devastating event. Traumatised, she hardly spoke. She was tending her two injured brothers Kushal and Kuldeep who lay on charpoys in the courtyard of their home that was heavily pockmarked by the 81mm shell that struck it. 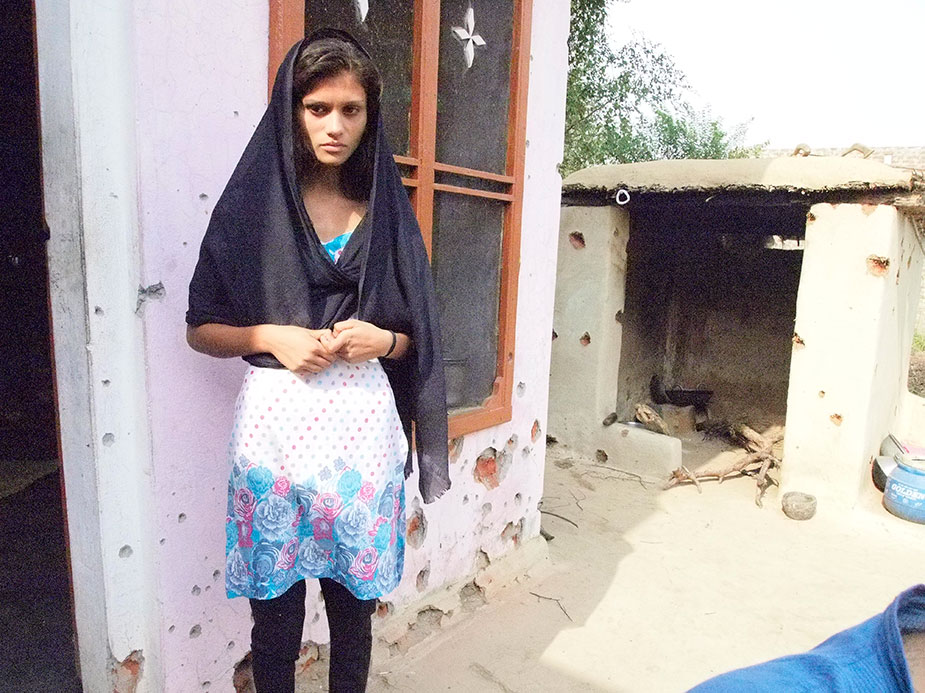 Her father Sudhakar Chand, also injured, was sitting up with some difficulty to talk to the neighbours and curious visitors streaming into the house. Not only had the shelling taken away Surekha’s mother, it had also chipped away her freedom to go to school. Needed at home to take care of her family, she could only appear for school exams as a private candidate.

Now, with a fresh round of hostilities, there is more upheaval to deal with. Speaking over the phone on Wednesday, a shaken Surekha confessed that she was more frightened than before. “I can’t lose any more of my family and I wish the two countries would stop their attacks. What has happened to us should not happen to others.” She also asked me the same question that she and others in village after village that I visited in November had asked: why have the hostilities resumed in 2014 and to what end?

Samba and Arnia in Jammu is a terrain of double-rows of fencing with concertina wires where people cross the lines to conduct farming operations under the watchful eyes of the Border Security Force on this side and the Pakistan Rangers on the other. This is the International Border – Pakistan terms it a working boundary – that is guarded by paramilitary forces, while the more precarious Line of Control is manned by the armies of the two countries. In 2003, India and Pakistan signed a ceasefire agreement, which villagers say brought them a decade of peace.

When there is a lull in hostilities, as in the past decade, the people here lead perfectly normal lives – as normal as it can be in areas close to “enemy territory”. Some cross the first fence to cultivate their justly famous Basmati rice or maize but stop at the second fence, which was erected in 2010. “There is no concept of no-man’s-land along the IB,” explains a Border Security Force officer. “The border, marked by pillars, is just 100 metres from our new fencing.”

India constructed the second outer fencing as an additional deterrent to infiltration by militants from Pakistan but another explanation is that the United Progressive Alliance government in Delhi decided on it, despite Pakistan’s protests, to allow additional farming in the space between old and new fences.

Villagers might grumble that farming cannot always be conducted at the convenience of the BSF who open the inner fence gates at fixed times – a nuisance, perhaps, but an unavoidable precaution when the enemy guns are just a few hundred meters away.

“Life was alright till a few months ago,” said the wizened 75-year-old Gita who lives in a spacious house with a big courtyard in Arnia Trewa. There is a tractor parked inside the house, which is just a couple of kilometres from the Vikram outpost and down the road from the bunkers of BSF soldiers. “Then the shells started falling after so many years of peace. One night we hid under our charpoy behind the tractor when there was a lot of shelling and the next day we had to leave for camps set up by the army a long way off.” Gita said they had to leave the cattle behind.

A BSF jawan I spoke to in Chilliyari (he was on leave from his posting on the International Border in Gujarat) explains that earlier only light machine gun fire and medium machine guns were used whenever there was sporadic exchange of fire. “The small arms fire didn’t bother us all these years,” he said. But now, the Pakistanis are using 81mm and 60mm mortar shells that explode with great force and cause huge damage. “We are also doing the same,” he added.

The new hostilities have disrupted the normal rhythms of life. Schools tend to be closed, sometimes for as long as a month, since many have been converted into relief camps. Exams have been put off and kids are left to their own devices. Some mothers say their young children are now afraid to venture outside and often wake up in the middle of the night fearing attacks.

When I visited Chiliyari things were just returning to normal. A school bus had brought children back from the school where they had just taken a monthly test and a little boy showed me his Class II paper where he had got the summer capital of Jammu and Kashmir wrong. He didn’t care.

There are bigger disruptions, however, that are affecting the economy. Migrant workers from Nepal and Bihar, the backbone of farming operations, are giving the troubled districts a wide berth after the shelling started in earnest. Khazan Chand, owner of large farmlands in Galar village in Samba district, says the harvesting of his premium rice could not take place for want of workers.

Invariably, people here ask you the same question: why the hostilities now? Some speculate that this is because the Bharatiya Janata Party government under Prime Minister Narendra Modi has decided to give a “fitting reply” to the Pakistanis to teach them a lesson “once and for all”.

That is what Champa Devi, who was leading her injured buffalo back home after a visit to the vet, felt. “We have inflicted more damage on the other side,” she told me, “and one solid attack should teach them not to shell us again.” 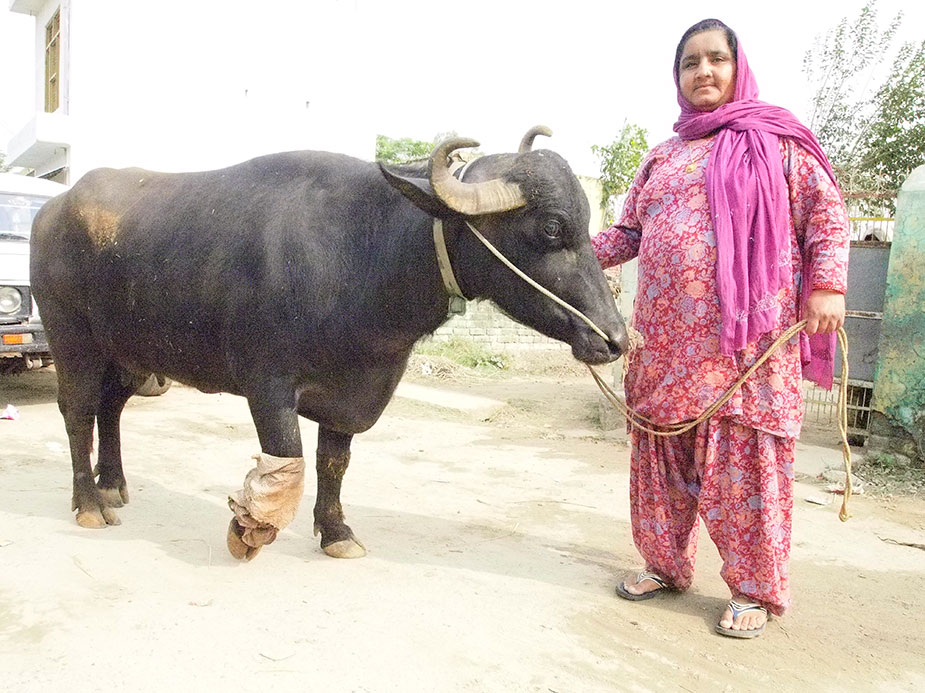 People like her believe that under the UPA government, the BSF had been restrained from returning the fire of the Rangers. But that has changed now and the BSF is giving them a kadak (firm) answer “because we have seen the damage in Pakistani villages (on television apparently) and it’s worse than what we’ve experienced”.

So has the BSF been given a free hand to act? Speaking to a fact-finding team of the Pakistan-India People’s Forum for Peace and Democracy which visited the border areas to study the impact of the firing on the border folk, a BSF spokesman said categorically: “In not a single instance have we opened fire first but we are forced to retaliate.”

As to why Pakistan was attacking, he hazards a guess: “It is perhaps desperation across the border because of the intense vigil on the border. We keep this border thoroughly dominated and they (Pakistan) are not able to infiltrate and this is causing frustration.”

Pakistani officials, on the other hand, say it would be suicidal for them to open another front when they are battling the Taliban in North Waziristan. According to them, the ceasefire violations have all been by the Indian side, possibly because of “new political compulsions” after the change of government in Delhi.

Peace activist I D Kajuria, convenor of the International Democratic Platform, who has been in the forefront of the campaign to normalise relations between the warring neighbours for the past two decades, is worried. “Since August 2014, the entire border has been shaken up,” he said, “and it has led to suffering on both sides for no reason. It makes no sense.”