Jan 10, 2015 · 12:30 pm
Carole-Anne Sweeney, The Conversation
Michel Houellebecq’s latest novel, Soumission, was published just hours before the attacks on the office of Charlie Hebdo. It consolidates his reputation – for better or worse – as one of the few contemporary writers in France (or in Europe) addressing the question of Islam in Western society head-on.

Comfortable with his image as the enfant terrible of French literature, Houellebecq described Soumission as “political fiction”. Set in France in 2022, Soumission imagines the exhausted old left and right joining forces to back the leader of the Muslim Fraternity for president, accepting the imposition of Sharia law in France in order to halt the power of the Front National.

Everything about the book – promotion of which has now been suspended by the author – had appeared calculated for maximum provocation. Its title deliberately echoes that of the 2004 drama Submission, a controversial film on women in Islam whose director, Theo van Gogh, was murdered after its release.

And the novel could scarcely be more politically relevant. France’s Muslim population is the highest in Western Europe, and is growing. Given that demographic swell, the continuing rise of the far-right Front National under Marine Le Pen, and the prospect of radicalised young Muslims returning from Syria, the issue was an explosive one long before the shocking events at Charlie Hebdo’s Paris offices.

While the right-wing Le Point deemed Soumission “an attack on the blindness, silence, passivity and complicity of centre-left media and intellectuals,” left-wing daily Libération decried it as a “pathetic and provocative farce” and a consecration of right-wing thought into French “high” culture, “warming up the seat of Marine le Pen at the Café de Flore” – the celebrated meeting place of Sartre, Camus and de Beauvoir.

For its part, Charlie Hebdo promoted the book with a coverdepicting Houellebecq as a cartoon sorcerer a bedraggled, louche figure spouting his “prediction” for 2022 that he would be observing Ramadan.

This highly provocative depiction should come as no surprise, since Houellebecq has been voicing highly caustic views on Islam for most of his career.

While his 1998 novel Atomised was controversial for its rejection of cherished post-’68 ideals, it was his 2001 work Platform that landed him in court, indicted for inciting religious and racial hatred.

Platform’s characters disparage Islam and Muslims in the starkest of terms: “Every time I heard that a Palestinian terrorist, or a Palestinian child or a pregnant Palestinian woman had been gunned down in the Gaza strip, I felt a quiver of enthusiasm…” 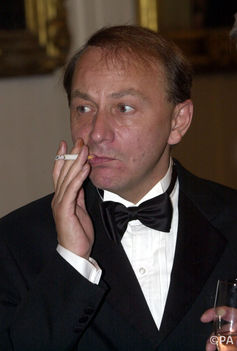 Words spoken by a character in a novel are one thing, but Houellebecq went on to elaborate upon these provocations himself in a magazine interview: “It is more than contempt I have for Islam, it is hatred.” He also called it “the most stupid religion of all,” but also denied being a racist, saying that “I have never confused Arabs and Muslims.”

In court, the rector of the Paris mosque argued that “Freedom of expression ends where it can hurt … I think that my community has been humiliated, my religion insulted, and I want justice to be done.”

Yet Houellebecq was acquitted of incitement to hatred. The judges agreed that while his remarks were neither “elegant nor subtle”, they were crucially “directed against the religion of Islam and not its adherents,” and that while the remarks were “characterised by neither a particularly noble outlook nor by the subtlety of their phrasing,” they were not punishable under French law.

The same might be very well said for the cartoons of Mohammed published by Charlie Hebdo (among others) in 2011, which equally fit into France’s long tradition of safeguarding freedom of speech and the republican principle of laïcité.

What is arguably more pernicious about Houellebecq’s work is its embrace of the idea of déclinisme – the notion that France, and even Europe, is in an unstoppable mode of cultural, intellectual political and economic failure.

Some figures on the right in France, such as Eric Zemmour in his scaremongering Le Suicide français, have suggested that Houellebecq’s vision in Soumission might be a feasible future scenario – but others, such as the eminent political scientist Olivier Roy, have roundly discredited the theory, pointing instead to the increasing secularisation of European Muslims.

It is to this mood of political pessimism that the Front National, with its origins in the Catholic, monarchist right, is trying to appeal. Supposedly “detoxified” of its anti-Semitic past under Marine Le Pen, the FN won its first seats in the French Senate in 2014.

Given the swing to the right taking place across Europe, represented by the rise of the FN, UKIP in Britain and groups such as PEGIDA in Germany, the Charlie Hebdo massacre will have an impact far beyond France’s borders – and the French debate over Islam in society, stoked by figures such as Houellebecq, will rage on.