Contribute Now
Ad
“Kabir Das has said of God, ‘I live neither in a mandir, nor in a masjid, not even in a girjaghar. I live in your heart.”

It is unlikely that Kabir, the poet-saint who lived in medieval north India, had encountered Christianity, but it is fitting that his malleable poetry was invoked by Naval Singh, an old man in Madhya Pradesh, to make sense of the storm his family had landed in.

Sixty-year-old Naval Singh's earliest memories are of breaking stones with his parents. His family was part of a group of workers that  in the 1970s was brought to a forlorn part of Khandwa district in southern Madhya Pradesh to build a dam on the Narmada river. Singh grew up hearing his parents say that their community, the beldars, was a bhatki hui jaat (nomadic tribe).They had no fixed land. They could do nothing but migrate for work. But once the dam was built, his old parents were relieved that no one asked them to leave. Along with other worker families, they stayed and their makeshift homes on a barren hill near the dam coalesced into a village called Sukta Dam Colony.

Four decades later, in the closing week of 2014, activists of the Bajrang Dal barged into a feast taking place in the village at the home of Shyamlal, an old man whose son is married to Naval Singh’s daughter. Among Shyamlal’s guests were the family and friends of Karunakar, a pastor who lived in the nearby town of Dhulkote. The Hindutva activists claimed the pastor was undertaking a conversion ceremony in the village. Acting on their complaint, the police put ten people behind bars in an anti-conversion case. The key evidence held up against them were saris and shawls found at the feast. The Hindutva activists claimed they were being distributed by Karunakar to lure villagers to Christianity. But as Scroll reported, photographs taken at the feast show that it was the villagers who had gifted them to the visitors. “We even gave the police the address of the shop from where we bought the saris,” said Naval Singh. “But they seemed in no mood to listen.”

While the case itself seemed open-and-shut, the journey to the village through barren, rain-swept hills opened up other questions: what had brought a people as marginal as the beldars of Sukta Dam colony in contact with Christianity, and the police case apart, what else had sprung forth from the encounter?

The pain of dislocation

To answer this, let's first return to Naval Singh's story. After the construction of the dam was over, his parents decided to stay in the village but Singh, young and married, had to provide for a growing family, and so, he started travelling out in search for work. He first went to Mumbai, where he did whatever work he could find: digging pits, breaking stones, construction jobs. Then, he moved to western Maharashtra where he worked in sugarcane factories. His wife moved with him from one work site to another. The couple had ten children. Four died from various illnesses.

After a lifetime of hardship, just when he thought it was time to rest, his wife began to go mad. “She went mad because of a dusht atma,” he told me. “She would scream, throw stones, walk away alone in the middle of the night, even tear off the clothes she was wearing.”

At that time, the family lived and worked in a sugarcane factory, 100 kms from Pune city. “As I was taking her away for treatment, a man from my community asked me, ‘where are you going?’ I said we were going to the hospital. ‘What’s the use going to the hospital?' he said. 'Come with us, we are going to a Church, she will feel better there.’”

They took a train to Dapodi, a suburb of Pune. It was Saturday evening. Thousands sat praying In a large Church hall. “Everyone was praying quietly,” he recounted. “The pastors were standing at a distance.” After that prayer session, his wife felt better. They went back another four Saturdays. “You need to pray five times at the church to recover fully." On their way out, they even bought small bottles of healing oil, for Rs 10 each. 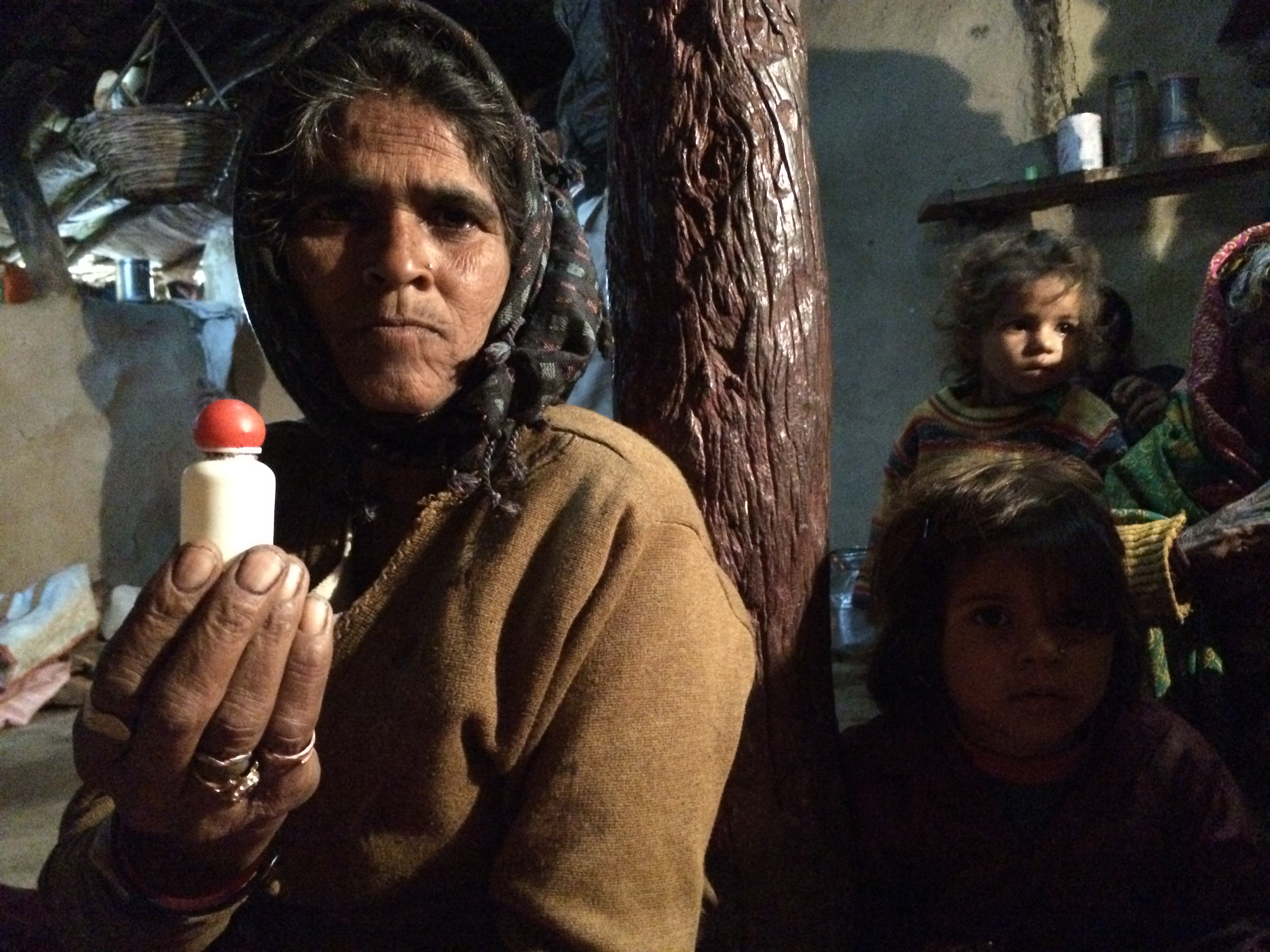 The bottle of oil bought outside the church at Dapodi

The couple does not remember the name of the church but the description seems to fit the Vineyard Workers’ Church in Dapodi. Established by pastor Peter David Silway and his wife Jayshree Silway, the church’s website says it has “a unique mandate to preach the good news to the poor of the land”. It holds prayer meetings four times a week which it claims are attended by "more than 15000 people from varied faith and background." The meetings have invited the ire of Hindutva groups who see them as venues for religious conversion. But the church claims to have more noble aims: “Pastor Peter’s fervent prayers for the sick and the needy brought about a great change in the society. Countless addicts have given away their wayward lives and are now leading a blessed and prosperous life.”

It is possible to hold the idea of miraculous cures through prayers as irrational while recognising that for poor migrant workers who have lived life on the margins of society, the sense of belonging created by the act of participating in a mass ritualised prayer could itself be therapeutic.

Naval Singh's second brush with the church at Dapodi came about a year ago, when his grandchild, a seven year old boy named Badal, fell ill with a mysterious fever. The family took him to a private hospital, spending Rs 25,000 but the child did not recover. “That’s when I took a mannat that Prabhu, if my child gets better, I will sacrifice a goat in your name and call do-chaar father log,"  said Shyamlal, Singh's friend and Badal’s paternal grandfather. The child recovered and to keep his word, the old man decided to host a feast the day after Christmas, inviting through a chain of contacts Karunkar, a pastor who lived in the nearby town of Dhulkote.

A native of Odisha, Karunkar works with the Friends of Missionary Prayer Band. Headquartered in Chennai, the organisation calls itself “a missionary movement of Christian Indians who want to personally share the Gospel of the Lord Jesus Christ with the fellow Indians.” To this end, FMPB trains its missionaries to “to reach and teach people groups who have not heard of Christ, making them disciples of Christ and thereby develops them as congregations to be integrated with the established churches under the pastoral care of the indigenous leadership.” With a large footprint in the tribal districts of Maharashtra, Madhya Pradesh and Gujarat, FMPB has often run into conflict with Hindutva groups, which accuse it of promising miraculous cures to attract gullible tribal people into the Christian fold.

But those focusing on the aims and methods of Christian missionaries often forget that their encounter with people is not a one-way street. Those whom they seek to convert have their own understanding of religion and faith. These beliefs in turn shape their encounter with Christianity. The outcome often leaves it unclear whether it is the person who stands changed or the religion itself.

Had they known better, the Hindutva activists who barged into Shyamlal's feast may have found it rich in irony: Akin to the Hindu practice of feeding Brahmins, Shyamlal had invited Christian guests to partake in food prepared from animal sacrifice, a pagan idea deeply antithetical to Christianity.

They might have strong belief in a Christian god, who they call Prabhu, and visualise as Jesus Christ, but neither Shyamlal nor Naval Singh think of themselves as Christians. When census enumerators came to their village, they told them they were Hindus. The idea that praying to Prabhu amounted to a change of religion did not strike them until their encounter with Hindutva activists who accused them of abandoning their gods and festivals. “But how can we abandon our festivals,” said Naval Singh. “Can you abandon your sister? You will have to get a rakhi tied on rakshabandhan.”

Neither had they turned away from the other gods they have known over the years. When Badal fell ill, his grandfather prayed at the church for his recovery, while his mother undertook a fast in the name of Tulja Aai, the resident goddess of the temple in Tuljapur in Maharashtra. “Whichever god comes in front of us,” said Sangeeta, Badal's mother, “we bow before him. Ussi ke haath per jod lete hain.”

The act of praying to God, they said, was not very different from visiting a doctor. “The way we go to a doctor, the same way we pray to God to tell him about our dukh and zaroorat," said a young man. If help came their way, it was natural to go to the same god again. “Apne ko fayada jahan se hai wahin jayenge. We will go wherever we get help."

Such was the transparent logic to their relationship with the gods that they simply failed to understand why the Hindutva activists would attack their feast.

“They told us, ‘You are spoiling our gods,'" recounted Naval Singh. When he asked them how, they said, "By believing in Prabhu."  He did not get a chance to respond at that time but the idea struck him as idiotic. “Now, in our Hindu religion, there are 33 crore gods,” he told me. “Prabhu bhi to un mein se hi hai na. Prabhu is one of them only.”