Contribute Subscribe
Ad
A Mughal caravan: The story of my family began somewhere in the Chambal basin where a descendant of the Jat ruler of Bharatpur, Maharaja Suraj Mal raided and looted a Mughal caravan. He and his cohorts got caught. As penalty, two of his sons were asked to convert to Islam or face the consequences of raiding the royal treasury. It was hardly a choice. They complied. However, the Hindu and Muslim branches of the family remained close. Festivals and weddings of one weren’t complete without the other. 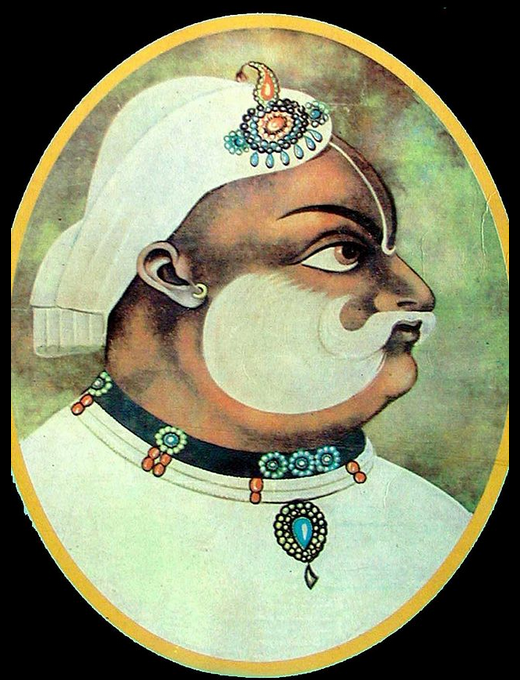 A visit to Dholpur: My mother's father's family comes from this line of Jat-Muslims of Dholpur who trace their roots to Raja Suraj Mal. I once decided to take my mother to her ancestral village in Dholpur. It was our first time there. I was told by one of the senior relatives there how nice it was to see a new branch of the family. Religions change but family is family, he said. My mother had never been to this village because her mother, my Nani, had felt that her daughter would be too much of an anomaly as an educated, working woman from the city. By the time we made this pilgrimage to our past, Nani had already passed on and my mother was herself a grandmother through her eldest child. 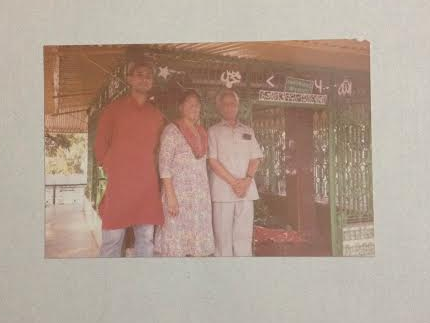 The writer with his parents on a visit to Dholpur.

House on fire, 1857: My Nana was a Jat-Muslim from Bharatpur, but my Nani was a Pathan Muslim from the same area. In the Pathan side of the family, there is another lore, around the time of the 1857 mutiny. In the same Chambal belt, a young English girl was rescued from a burning house by Nani’s great-grandfather. My Nani's great-grandfather was a "Ghadar" (Indian Mutiny) volunteer who had gone to fight the British in Delhi. According to family memory, this guy's personal spoils of war on his way back from Delhi, were three things: modi, ghodi, jodi ‒ which in the western Rajasthani dialect translates as a girl, a mare and a pair of door panels that caught his fancy. As the story goes, this great-grand ancestor of mine was returning from his war effort when he chanced upon this cantonment house, which had been set on fire. From it came the screams of a young girl. This young adventurer jumped into the blaze, rescued the English girl, her horse and a set of doors that he really liked. The girl grew up and married her rescuer as she had no one else to go back to. It must have been difficult to save and take home a girl from the enemy camp. It is a fact is that he did it, and did so most heroically and most honourably.

When Nani met Nana: My Somewhat Anglo-Indian-Pathan-Muslim Nani was married to my Jat-Muslim Nana who was a constable in the British Indian Police. It was a perfect match, Nani used to tell us. He was the most handsome man she had seen. Tall and strapping, almost like the English officers he worked under. It was her pride in her man’s good looks, she used to say, that caused him to die young.

Gates of Paradise: It must been the late 1930s when Nani returned to Dholpur as a widow only to realise how things had changed for her. She was no more the wife of a favourite son, but a young widow who in the deeply patriarchal Jat community, was the closest one could come to living a curse. She decided to end her miserable life by jumping into the Chambal with her two small children. But someone rescued them and brought them to a Christian mission hospital in Jhansi. In her stories, Nani described her near death experience as meeting a bearded man in a robe who showed her a beautiful, paradisiacal garden through a gate. She wanted to enter, but the man said it is not her time yet. At the hospital, Nani would recognise this man as Jesus Christ. This near-death experience laid the foundation of Nani’s new faith. She converted to Christianity and herself became a preacher of the new faith, learning over time to read and write.

The Lord is My Shephard: Around the same time, on my father's side there was a similar story unfolding but far removed from the Chambal basin, in the villages of Kumaon bordering Tibet. My father's family came from a stock of Pahari Rajput farmers from Champawat-Lohaghat in Kumaon, Uttarakhand. My father was a posthumous child and so the tragedy of widowhood must have been far greater for my Dadi. I say "must have been" because Dadi never talked about what happened to her after her husband's death. It was like wilful amnesia. She had willed herself to erase all that had happened to her after her husband’s death in the prime of his youth. As a family we were left to complete the jigsaw of our past with whatever imaginary pieces we had at our disposal. Dadi never gave us any clues. She never went back, unlike Nani, who over the years made peace with her in-laws and visited her Dholpur family almost every other year. But like Nani, Dadi had also embraced Christianity at a mission in Pithoragarh. Hers was a simple faith where the idea of Jesus as the saviour found fertile ground in the abandonment she felt after becoming a widow. She’d often sang The Lord is My Shepherd in Kumaoni, which if my memory serves right, was Ishwarchho Mero Gwalo. Perhaps it was the only way she could recall her home, its pastoral landscape and mountains. Dadi’s new faith provided her the solace she had failed to find among her own people. Perhaps it made it easier for her to sever ties with her place of birth, her people and culture. Through the mission Dadi came to the plains and started working at a school in Kanpur.

A wedding in Orai: In the course of their lives in the plains of Uttar Pradesh, and passing through various Christian missionary institutions, Nani and Dadi met as fellow travellers passing through the difficult stages of single motherhood in the India of the 1940s. In the similarity of their situations they formed a bond and kept in touch through letters. Years later Begum Zaitun, now Mrs Mary Khan, would come face to face with Sarli Bai again and they would ask their children Zarina and Vishan to meet and see if they found each other suited for marriage. My parents clicked immediately and soon a date was fixed and by the end of the year a church wedding brought my parents together in holy matrimony in 1962 in Orai, a town between Kanpur and Jhansi, at a mission where Nani was working at that time. 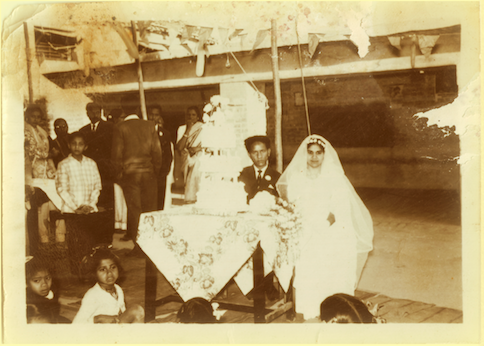 Dharamshala at home: As people who had known no other religion but Christianity, my parents were naturally deeply attached to their faith. Their mothers had gone through conversions and come out feeling more empowered as women, as human beings. They wouldn't have become the strong women they were had their lives been less tragic. My parents had absorbed, perhaps subconsciously, the sense of being wronged by their families. As a result, both Papa and Mummy never felt the need to go back to their ancestral places. The good that came out of this was the urgency and understanding my parents showed towards helping people who had nowhere to go. Our house often resembled a dharmshala where people stayed on for months, sometime years, secure in the belief that they’d be fed and cared for. 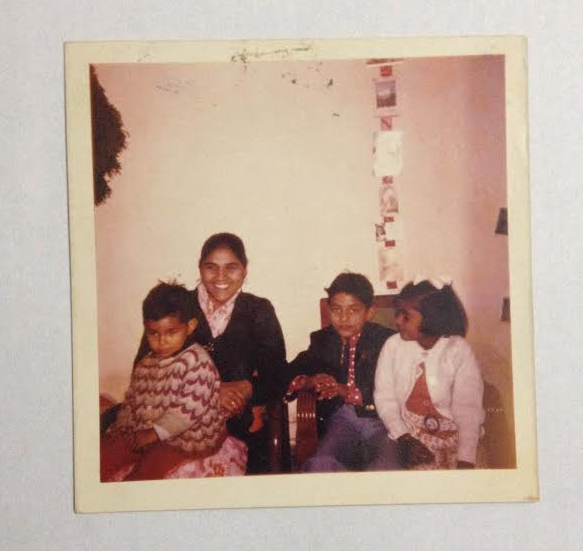 The author with his mother and friends at a Christmas celebration.

Indian, Christian: The faith of my parents was strong. But in its sum it was a composite faith, clarified into an essence not of orthodoxy or dogma but of humanity and compassion. My father went to Dayanand Anglo Vedic College in Kanpur, where his worldview began to be moored in the direction of a more Indianised Christianity. Papa’s own personal journey took on aspects of his heroes who were Sadhu Sundar Singh, a Sikh convert who later became a fine preacher and interpreter of Christianity, and Pandita Ramabai, a woman pandit or scholar who became Christian and founded many ashrams for widows and orphan girls. As I child I remember meeting many saffron-robed Christian sadhus and acharyas well versed in both Sanskrit and the knowledge of Christian theology. This was a Christianity that syncreticised the sadhu-shramana-seeker aspect of Hinduism with the love and compassion of Christ. 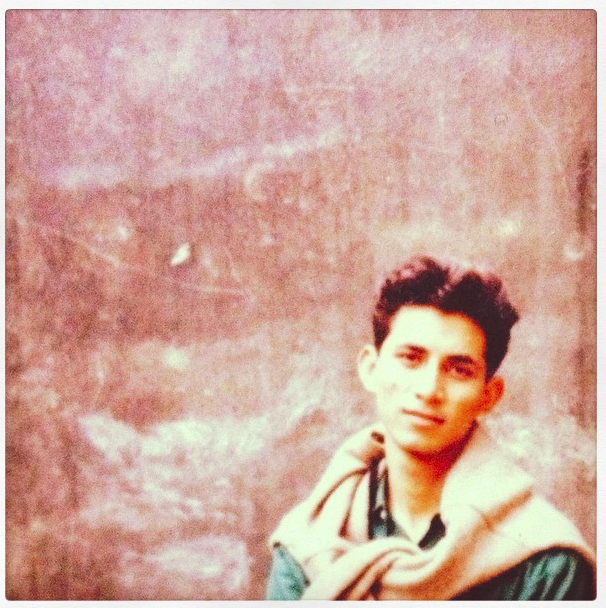 The writer in his late teens.

Humanity through faith: In my late twenties, as the 20th century was turning into the 21st, I decided to let go of the faith that I had been brought up with. I don’t know whether it was an act of rebellion, or the prevalent fin de siecle mood, or that I was being prodded on by my family’s legacy of embracing faiths different kinds.. I wanted to explore every kind of spirituality and mysticism there was. I was angry with organised religion for the divisions it created. While the core of religious philosophies remained non-violence, love, peace and benevolence, its zealots very often took extreme positions that created conflict. This deep personal dissatisfaction was also being amply evidenced on the national stage where Hindutva forces were catalysing a turn-of-the-century idea of India that was anathema to both the spirit and the lived reality of India. So I began my own mystical journey, reading, experiencing and training the mind to be unbiased. I learned from the tantriks how to go beyond taboos and limitations. From the Sufis I learned how to open my heart to people. From the Buddhist texts I learned how to hold myself responsible for every action of mine. I learned how a personal god ‒ the idea of god as an anthropomorphic being who understands you because he is like you - was not important in one’s spiritual journey. In conversations with Australian Aborigine elders, I understood the idea of cosmic continuity. How everything is a "dreaming", a continuum where the now never ends, it only changes shape.

'There Are Many Rainbows Inside A Cloud'
Digital art by Dhiraj Singh, 2013

This shape-changing continuum has found me love and companionship with Sahar, a Muslim. And with our son Kazuo, who holds within his name the Japanese idea of a man of peace. I hope this grand syncretism continues and finds more and more takers.

When I look back I feel the huge circle of ancestors around me who belonged to so many different faiths and persuasions. And I feel richer by their lives. So what was their essential faith, I often ask myself. The answer I receive every single time is humanity.

Dhiraj Singh is an artist, writer and media professional.

Why the noise over conversions? Our fundamental right to religion comes with safeguards