Contribute Now
Ad
As we approach the 70th anniversary of the liberation of Auschwitz on January 27, the victims of the Holocaust stand, with a good reason, at the centre of our attention. It is survivors' memoirs that shaped our understanding of this genocide. Yet this focus on the survivor sometimes goes hand in hand with an ahistorical, idealised reception of their memoirs.

I’d like to examine this trend at a recent celebrated example – a book by a survivor who became a historian.

In 2013, the Israeli historian Otto Dov Kulka published a much-lauded recollection of his childhood in concentration camps, Landscapes of the Metropolis of Death. Thomas Laqueur wrote in The Guardian:

Primo Levi’s testimony, it is often said, is that of a chemist: clear, cool, precise, distant. So with Kulka’s work: this is the product of a master historian – ironic, probing, present in the past, able to connect the particular with the cosmic. His memory is in the service of deep historical understanding.

The book won the Jewish Quarterly Wingate Prize 2014 and the Scholl Sibling Prize 2013. 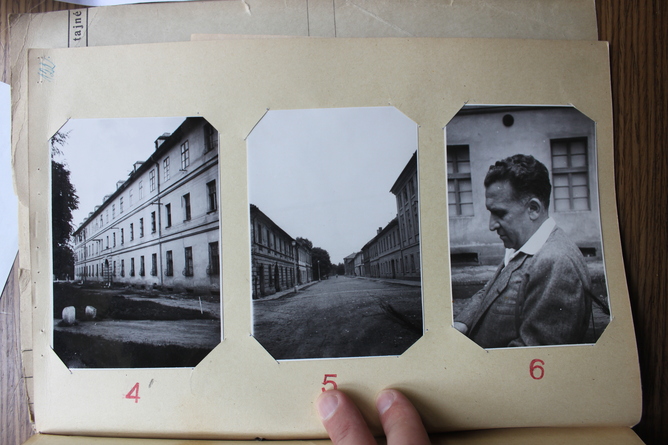 Deported when 10, Kulka spent a year and half at Auschwitz. His book is a collage of impressions, dreams and metaphysical musings about the camp. Kulka’s narrative purports to tell the story of a small Jewish Czech family — mother, father, and himself. Father, Erich, is deported in 1939 to a string of concentration camps for being a resistance fighter. In 1942, little Otto and his mother, Elly, are deported to Theresienstadt – and a year later to Auschwitz, where they are reunited with Erich. Elly and Erich conceive a child here. In the emotional heart of the book, the pregnant Elly leaves Auschwitz to go to a labour camp in order to save her unborn son, but dies shortly after giving birth in Stutthof. Only Otto and his father survive.

However, the metaphysical style of the book enables a fundamental omission of a complicated family history. With help of colleagues in the US, Israel, Germany and most importantly the Czech Republic, I reconstructed Kulka’s early life, working with the custody file, secret police files, survivor testimonies, and various other records.

In 1923, Elly Kulková married the much older Rudolf Deutelbaum, and in 1931 they had a daughter, Eva. Rudolf had brought in his nephew, Erich Schön, as a trainee, and Erich and Elly became lovers. In 1933, Elly gave birth to Otto. After years of gossip, family fallout, and a paternity suit (Elly’s family’s considerable property was in question), Rudolf and Elly divorced.

After suing for both children, Rudolf was granted the custody of Eva. In March 1939, Germany occupied Czechoslovakia, and Erich was deported as member of the resistance. In September 1942, the Jews of the Vsetín region were deported to Theresienstadt. Weeks later, Rudolf, his new wife and the 11-year old Eva were put on transport whose destination they did not know was Treblinka. Elly, who could have joined her daughter like many other parents did, stayed behind with Otto. One year later, they were deported and met Erich in Auschwitz. Elly was pregnant when she left in July 1944, and the baby, born and killed in September, was a girl. Elly died in January 1945 of typhus.

On January 23, 1945, as the SS was emptying Auschwitz in the face of the approaching Red Army, Erich and Otto escaped from a death march at the railway station in Ostrava and hid with his gentile friends near Vsetín. After the war, Erich became Otto’s guardian, inherited Rudolf’s properties, and they both changed their surname to Kulka. Otto emigrated to Israel, Erich remained in Czechoslovakia, and both became historians of Nazi persecution of Jews and World War II. 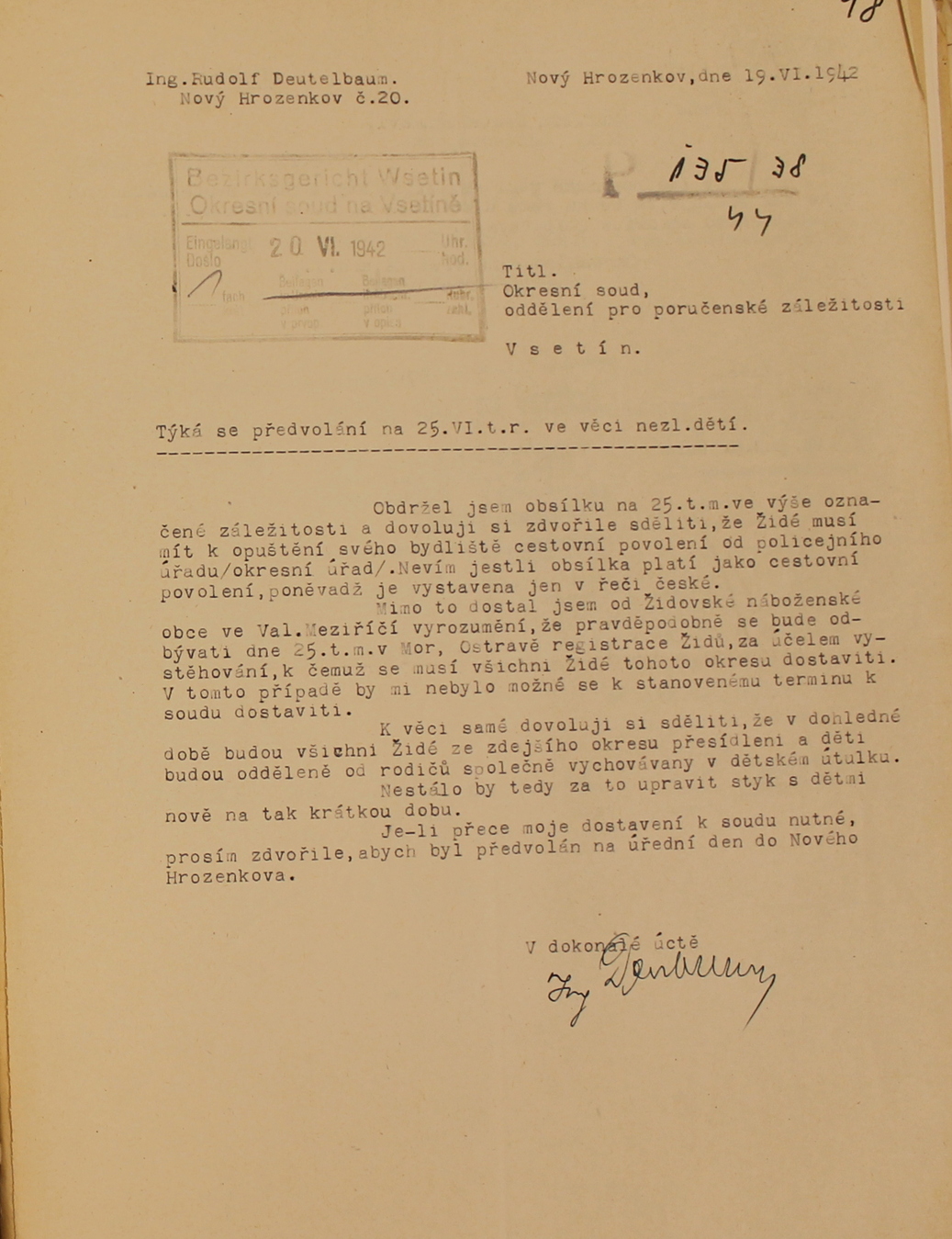 Letter from Rudolf Deutelbaum to the court in June 1942, apologising for not being able to make it to the next custody hearing because he cannot travel as a Jew. Regional Archive Vsetín,Author provided

The story is fascinating in its own right — it has love, drama, adultery, money and death. I have considered the details of it further in a piece for Tablet Magazine. What makes it truly important is that Kulka censored the family’s story to create a family he wished he had. He erased his sister and the man who was his social, and perhaps also biological, father.

One of the reasons genocide survivors write memoirs is to recount their dead relatives: the names, faces, and habits of the murdered, of whom nothing remains, who don’t even have a grave. By writing Rudolf and Eva out of his book, Kulka erased them from history, and from existence. As long as this was Kulka’s private story, it was his to tell, or stay silent about. The problem arose when he published his book in its current form. He did not forget about his family: he didn’t want to tell.

Kulka’s story is symptomatic of how some memoirs refashion events to craft a better, and more acceptable, bourgeois, romantic story. By turning Elly leaving him in Auschwitz in July 1944 into the book’s emotional crux, the author concealed the earlier departure: when Elly’s daughter left without her, two years earlier. This abandonment does not make Elly a better or worse mother; but it helps us better understand her choices.

The book also removes a sister, and this makes Kulka part of the larger trend of erasing women from history. Historian Bonnie Smith has pointed out that many memoirists have omitted their female colleagues, to concentrate all spotlight on their “important lives”. In many classic autobiographies we find female protagonists on the margins, or not at all (for example, the eminent German-Jewish rabbi Leo Baeck and my own grandfather, the resistance fighter Miloš Hájek). Without knowing that we ought to look for the women, we will never realise they were there in the first place.

As much as I understand Kulka’s choice to render a family he wished he had in his memoir, the phenomenon needs to be criticised. Kulka is an established historian who manipulated history – and, as a historian, he knows exactly why we cannot make up stories. Among the many eminent historians of the Holocaust who praised the book, with the exception of Werner Renz, no-one pointed out the discrepancies.

The issue is a certain sacralization of the Holocaust survivors: indeed, some historians have criticised me for “lack of ethics" for writing about this matter.

The transition towards critical reading of Holocaust testimonies can be difficult, but it is so important for our work. A critical reading allows us to discern the victims with their agency, heterogeneity, contradictions, and faults: it reinstates them as the real people they were.