Contribute Now
Ad
Here’s a shocker: our very own samosa was never ours. You read that right. The neatly folded, tightly packed savoury goodness that we thought belonged to South Asian soil actually travelled here all the way from Central Asia centuries ago. But thanks to its amazing social networking skills, it cleverly adapted to the local’s tastes and happily settled among its culinary brethren and became one of them.

This is one food that has travelled far and wide, and like any popular traveller has left its footprints along the way. From Egypt to Libya and from Central Asia to India, the stuffed triangle with different names has garnered immense popularity. Originally named samsa, after the pyramids in Central Asia, historical accounts also refer to it as sanbusak, sanbusaq or even sanbusaj, all deriving from the Persian word, sanbosag. In South Asia, it was introduced by the Middle Eastern chefs during the Delhi Sultanate rule, although some accounts credit traders for bringing the fare to this part of the world. Nevertheless, from its humble beginnings ‒ in older days, people would cook the mince-filled triangles over campfire and eat them as snacks during travel ‒ samosa has come a long way. And after having earned the blessings of the Indian royalty, the snack soon became food fit for the king.

Today, samosa is a popular snack in many parts of the world. Perhaps its biggest secret to popularity and survival over the centuries is its different varieties of fillings catering to carious tastes across the globe. In Kazakhstan, for example, a somsa is typically baked and has a thicker, crumblier crust. Fillings generally range from minced lamb and onions, meat, and even pumpkin. The Hyderabadi luqmi, on the other hand, is strictly meat-filled and far crustier than the regular samosa consumed elsewhere in India and Pakistan. In the Middle East, the semicircular sambusak is stuffed with feta cheese, onions, minced chicken and meat, spinach, and in case of Jewish cuisine, mashed chickpeas.

But for us, samosa is the gorgeous, deep fried, twisted pack of spicy goodness that oozes with chicken, meat or potato. Few family gatherings or iftar parties are complete without this signature snack. And what does one do when guests arrive at a short notice? You guessed right. There are few snacks that couple as perfectly with tea as samosa, and the chai-samosa team is probably the reason behind thousands of brain-storming sessions and heated discussions. Be it an evening chat with friends at the street corner khoka, or a sophisticated business meeting in an air-conditioned room, the call for a samosa remains a constant. What can be better than biting into a hot, karahi-fried, chutney-coated snack, inhaling in its herb-essenced scent, munching on spicy, meat / vegetable filling, crunching on a coriander seed, tasting that teasing taste of ginger-garlic … you get the picture. 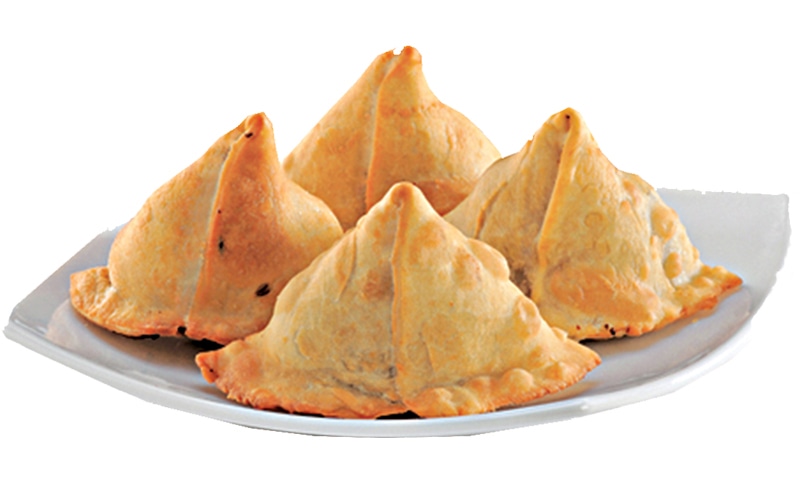 The diet conscious ‒ and to be fair, the health conscious, too ‒ would sigh, and perhaps nibble at the tiny piece of the crisp pastry to satisfy their craving. Not that you can blame them; who would have thought that one serving of potato-filled samosa is laden with around 300 calories? Even those tiny, bite-size ones have 28 calories each. And we have all discovered much to our dismay that it’s impossible to stop at one. One bite a time, and before you know it, you’ve covered half your calorie quota for the day with just two samosas!

When I was studying at university, one of our favourite pastimes would be to hang around a canteen that serves ‒ and I stand by it ‒ the best samosas on the face of this earth. But for me, the most fascinating aspect was watching workers at the canteen fill those samosas. In one fluid movement, they would flip a samosa patti into an inverted cone, fill the pocket with stuffing, and flip the patti over to form a smooth bulging triangle. Encouraged by how easy it looked, I decided to try it at home, only to discover that the art of samosa-making is no mean task. Rest assured, my respect for the workers increased multi-fold.

But for those, who are willing to toil and master the art, the varieties they can experiment with knows no limits. From the regular, meat/potato stuffing to spinach, corn and peas, to sweet halwa or coconut filling, the list is endless. The adventurous few may even want to foray into seafood samosas. Just dip them into chutney of your choice (those who even imagine samosas with ketchup, please reassess your priorities), and savour the taste that has weaved its magic forever.

This article originally appeared on Dawn.com.