Every field is filled with yellow mustard blooms,
Mango buds open, flame of the forest trees blossom,
Every branch echoes with the koyal’s call,
The lovely maiden dons her make-up,
The garden ladies bring fragrant bouquets.

These lyrics in the Purbi dialect of Hindi are sung in the Hindustani Raga Bahar and herald the beginning of basant, or spring. The song is sung on the eve of Basant Panchami, as part of festivities marking the occasion. This year it falls on Feburary 12 and will be celebrated at the dargah in New Delhi of the Sufi saint Hazrat Khwaja Nizamuddin Auliya. This is situated in the capital's Nizamuddin West, area, and is very close to Humayun’s Tomb, which is in Nizamuddin East.

He believed that saints needed to have ishq (love), aql (wisdom) and ilm (knowledge.) He used them all in generous measure. Although he lies buried close to many emperors and noblemen from the medieval ages, his dargah attracts more visitors and devotees than the other tombs.

Altamash Nizami, a direct descendant of Nizamuddin Auliya who is part of the dargah committee, told me a story about the origin of Basant celebrations there. Hazrat Nizamuddin did not have children but was deeply attached to his sister’s son, Khwaja Taqiuddin Nuh. But an illness took Khwaja Nuh away from this world, which immensely saddened the saint, who grieved over the loss for a long time.

His followers, particularly Hazrat Amir Khusrau, longed to see him smile once again.One day, Khusrau saw a group of village women dressed in yellow, carrying mustard flowers and singing on the road near the Khwaja’s chilla-khanqah, a retreat where he had spent his life reaching out to people, which is located behindHumayun’s tomb. Khusrau asked the women where they were going dressed like this. The women replied that they were going to the temple to offer flowers to their god. Khusrau then asked them whether this would make their god happy. When they said it would, Khusrau immediately dressed up in a yellow saree, and carrying mustard flowers, went before the saint singing sakal ban phool rahi sarson.

Recognising his favourite disciple and amused by his costume and song, the saint finally broke into a smile. This was commemorated as an occasion for rejoicing, and since then his followers have celebrated the onset of Basant by dressing up in yellow, carrying mustard flowers and singing qawwali.

Last year, I attended the celebrations. The atmosphere was electrifying. The function started after asr, or afternoon prayers, when qawwali singers gathered in a lane in the nearby Nizamuddin Basti, a settlement that dates back to the medieval period, opposite the grave of Ghalib, the great poet who lived during the last days of the Mughal empire. The celebrations have begun at this spot for years. No one could tell me why, but it would not be surprising if it was close to where Khusrau, too, had started his song. 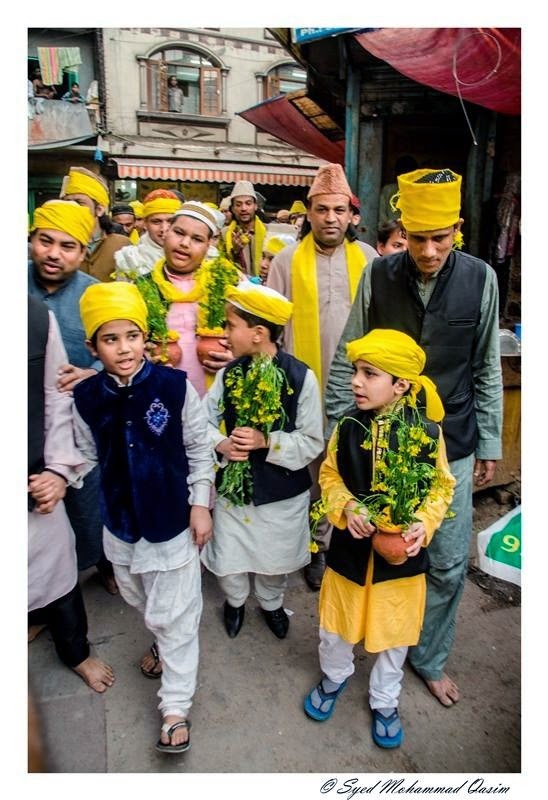 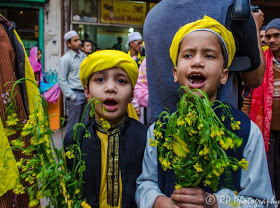 Visitors joined the procession, which went into the bylanes of the settlement, stopping at the grave of Khwaja Tajuddin Nuh,the saint’s nephew, before finally entering the dargah. Once inside the dargah, the singers took out yellow sheets that they had carried with them, and holding it above their heads, entered the shrine. This is the only occasion on which the qawwali singing is done inside the shrine, where the grave of the saint is located. On all other, occasions it happens outside, in the courtyard. 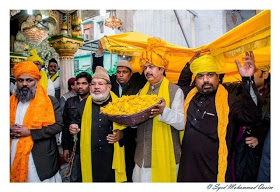 The ceremonial prayer inside the Dargah was led by the sajjadanasheen, a descendant of the saint who administers the shrine. He placed a yellow sheet and mustard flowers on the saint's grave, and then lit incense sticks, as the qawwals sang:

Rejoice, oh loved one, rejoice,
Spring is here, rejoice.
Don your make-up, put kohl on your eyes,
Braid your long tresses,
Oh, wake up from your sleep,
Your destiny too has woken up
It's spring here, rejoice. 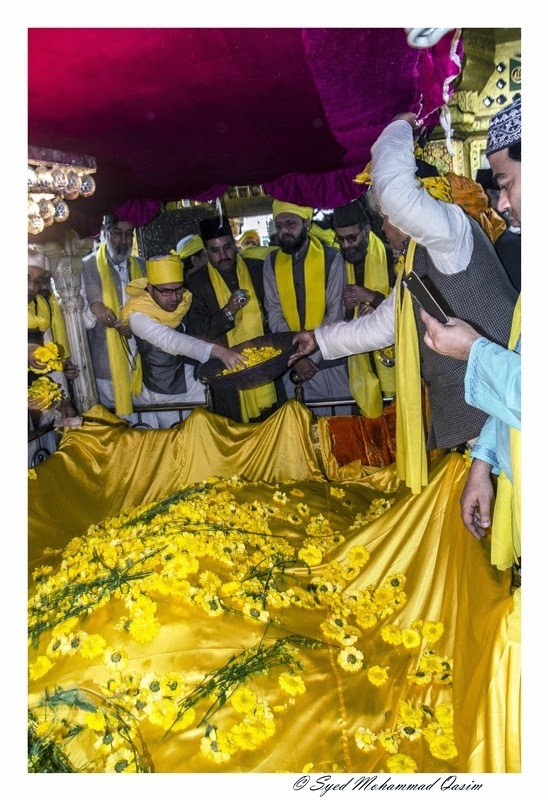 Following this, everyone made their way to the courtyard, where, encouraged by the sajjadanasheen, the qawwals sang and rejoiced. The singing lasted for about two hours, after which the qawwals went to Amir Khusrau’s dargah, situated across the courtyard in the same complex, and made offerings there. 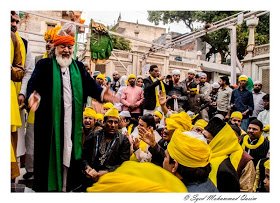 The shrine’s courtyard was full of people from different walks of life and faiths, united by a common love for the saint. They were dressed in yellow to celebrate the occasion when he smiled once more on the eve of spring. Women are not allowed inside the shrine, but other male visitors of any faith can enter.

Although Muslims in Delhi celebrate Basant only at the dargah of Hazrat Nizamuddin Auliya, today, Dargah Quli Khan, a senior officer in the entourage of Nizam-ul-Mulk Asafjah from Hyderabad who lived in Delhi between 1739 and 1741, describes colourful festivities in many dargahs in his diary, Muraqqa-e-Dehli.

The festivities would start in Qadam Sharif, the dargah of Fatah Khan, the son of Sultan Firoz Shah Tughlaq, in Paharganj, which has now fallen into disrepair but was apparently a bustling place during Khan's time. On the second day, singers and dancers went on to the dargah of Qutub Sahab in Mehrauli, then to Dargah Hazrat Chiragh Dilli, near present-day Greater Kailash. On the third day, they gathered at the dargah of Nizamuddin Auliya.

"In the courtyard and surroundings of this place of felicity, everyone waits impatiently for the qawwals, dancers and pilgrims," he writes, as rendered in the English translation of his work, 'The Mughal Capital in Mohammad Shah’s Time', by Chander Shekhar and Shama Mitra Chenoy. "The qawwals and singers pay their tribute by reciting their compositions in a delightful manner and the pilgrims present colourful bouquets and pray for the pious soul of the Prophet [peace be upon him].

"The celebrations went on for seven days. On the sixth day, they would go to the Emperor’s palace and on the seventh day it would culminate on the grave of Azizi in Ahadipura [a colony of gentlemen troopers], which they would wash with wine and take it in turn to dance. They feel their dancing and singing will provide peace and pleasure to his soul." 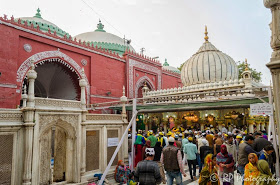 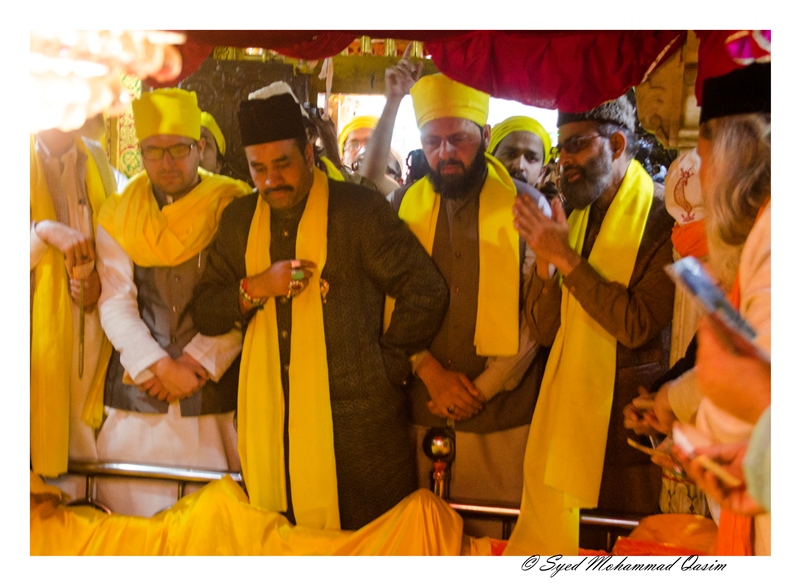 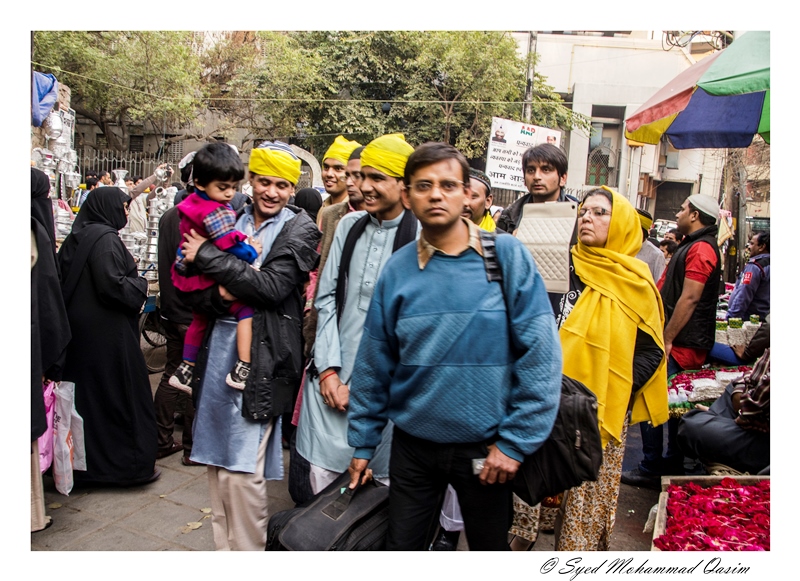 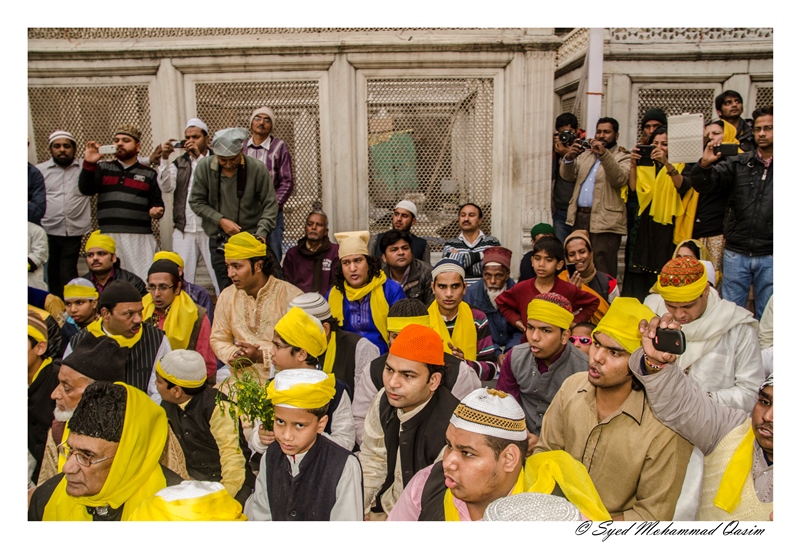