Feb 07, 2015 · 04:30 pm
Farhaan Wali, The Conversation
What makes someone want to travel to some of the most dangerous places on earth to fight alongside terrorists? It’s a question we’ve been asking about young people for more than a decade. But the rise of the Islamic State (IS) in Syria and Iraq has seen the onset of a particular phenomenon – more and more young women are now leaving the West to support the group in its controlled territories.

Since the Islamic State’s campaign began, it is estimated that 3,000 people have migrated from the West to join the cause – 550 of them women.

On the face of it, IS and its “caliphate” seems to be a male-dominated environment. Until now, it has not been clear how IS makes room for female activists. But a document obtained by anti-extremist think tank the Quillam Foundation, which purports to be a guide for jihadist brides, has shed light on the role of women under IS. It states:

The role of women is inherently ‘sedentary’, and that her responsibilities lie first and foremost in the house, except in a handful of narrowly defined circumstances. This role begins at the point of marriage which, it is declared, can be as young as nine years old.

So why do Western women choose this restricted life? A recent report from the Institute for Strategic Dialogue has examined the role of female migrants in IS for the first time. This examination of these clandestine activists provides insight into the possible threat migrating female activists may pose to the West – and why they go in the first place.

The will of Allah

It appears that religious revivalist tendencies inspire female activists, who ultimately seek to embrace “a new vision for society”. In most cases, female migrants felt their identity and purpose had been empowered by preserving the notion of “true Islam”. The challenging process of turning away from their previous lives is mitigated by their strong idealistic world-view. Thus, as one female activist indicates, joining IS was the practical manifestation of “the will of Allah”.

These women often hold disturbing opinions that justify violence against the West. The women espouse a radical worldview drawn from Islamist ideology. In particular, the notion of “Al-wala wal-bara” (loyalty and disavowal) has been firmly directed and applied to the non-believer and encourages absolute disassociation with the disbeliever. This ideal gives rise to a worldview that allows the activist to de-humanise all non-Muslims. This de-humanising process provides the ideological pathway for extreme acts of violence.

Online recruitment is a particular problem. Female activists are turning to social media to post glorifying tales of life under IS authority. This could act as a lightning rod for disaffected young Muslims across the western world.

All this comes before the threat posed by dormant returnees. Those who have returned home often exemplify a deeper hatred of the West, especially after those who have experienced the death of a husband in the wake of drone attacks. This fragmented state of being can trigger potential terror threats within the host country, and thus the report strongly recommends the need to track and monitor those who seek to return home. 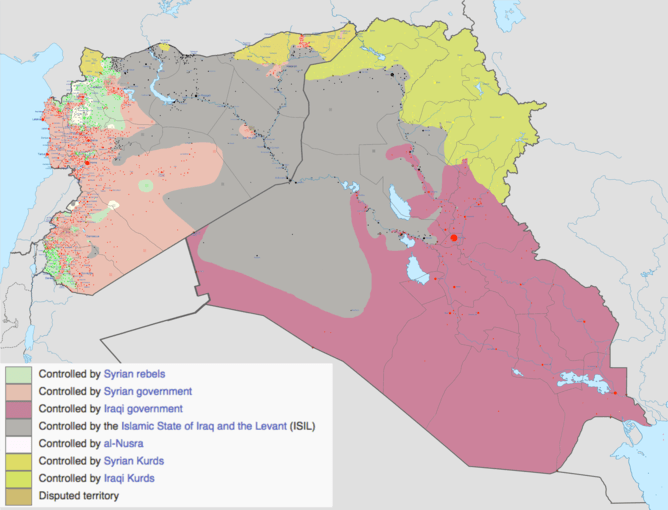 The Syrian Civil War and the Iraqi insurgency.

The report also systematically documents the practical acts currently performed by female migrants. Unmarried women stay in a group hostel provided by IS, and married women who travel with their husbands are given a home.

Women do not fight for Islamic State, performing instead a range of domestic duties once they have settled in controlled regions. One migrant posted a picture of a cheesecake she had made with a friend to Twitter. The report states:

The scene in this picture, however, is not a typical household situation, as there is a grenade positioned next to the cake.

Many of the reasons given by female migrants to IS territories are the same as those espoused by their male peers. As part of my research, I am currently interviewing young male Islamists who are looking to travel to IS controlled territories. These are principally young, second-generation Muslims, who feel alienated from British society.

They tell me their ideological motivation is two-fold: to live under the banner of “true Islam” and to participate in the global jihad. These young men have been radicalised by a selective ideology, which draws upon an alarmist worldview (for example that Islam and Muslims are under threat). This promotes a rapid response, as the threat posed is perceived as immediate. Salafi-jihadist groups in the UK have been extremely effective at turning this rhetoric into a significant operation.

Authorities must target these Islamist groups acting as a recruitment base for both men and women migrating to IS territories. A counter-narrative should be conveyed to those young Muslims who feel disassociated with British society. In the case of young women, the report identifies families as playing a key role in persuading would-be migrants to stay in the West, or using practical measures such as withholding money or passports to prevent their daughters from leaving.

At the organisational level, the individuals who radicalise young people should be targeted. This can be done using banning and control orders for known radicals. The fight must also be taken to social media, which is acting as a new frontier for the Islamic State’s campaign of terror.

Islamic State vs al-Qaeda: a rivalry that dates back to old personality clashes