Contribute Now
Ad
Brought in place of the colonial law of 1894, the land acquisition law of 2013 sought to safeguard the rights of people losing their land through two provisions. One, it made it mandatory for private projects to seek the consent of 80% of the land losers before acquiring land. It also introduced the idea that land should be acquired only after a cost-benefit analysis called social impact assessment. As 2014 drew to an end, the Narendra Modi government cleared an ordinance that removed both these clauses.

Faced with criticism over the dilution of the law, the Bharatiya Janata Party has argued that the key provision of the law regarding compensation to land losers has remained untouched. As recently as this week, in an interview to Rediff, the rural development minister Birendra Singh said, "We have protected the farmers interest to the best of our ability. No compensation clause was touched, no rehabilitation clause was touched."

On Sunday, a BJP spokesperson told ANI that the ordinance was “pro-farmer” because it “includes a 4-time compensation for farmers in rural areas.”

The ordinance also includes a 4-time compensation for farmers in rural areas; it is definitely a pro-farmer ordinance : Sambit Patra (BJP)

While it is true that the BJP government at the centre has not tinkered with the compensation rates, at least two BJP governments in the states have framed rules to ensure that farmers do not get four times the market value of their land.

One of them is the state that rural development minister Birendra Singh hails from – Haryana.

The case of Haryana

On December 4, just a little over a month after BJP’s Manohar Lal Khattar was sworn in as chief minister of Haryana, the state government notified rules under the Right to Fair Compensation and Transparency in Land Acquisition, Rehabilitation and Resettlement Act, 2013. Rules are required for the implementation of laws. For land laws, both the centre and the states are empowered to frame rules.

In its rules, Haryana has fixed the compensation for both rural and urban areas at par. Regardless of whether the land is urban or rural, the compensation would be just twice the land's market value. 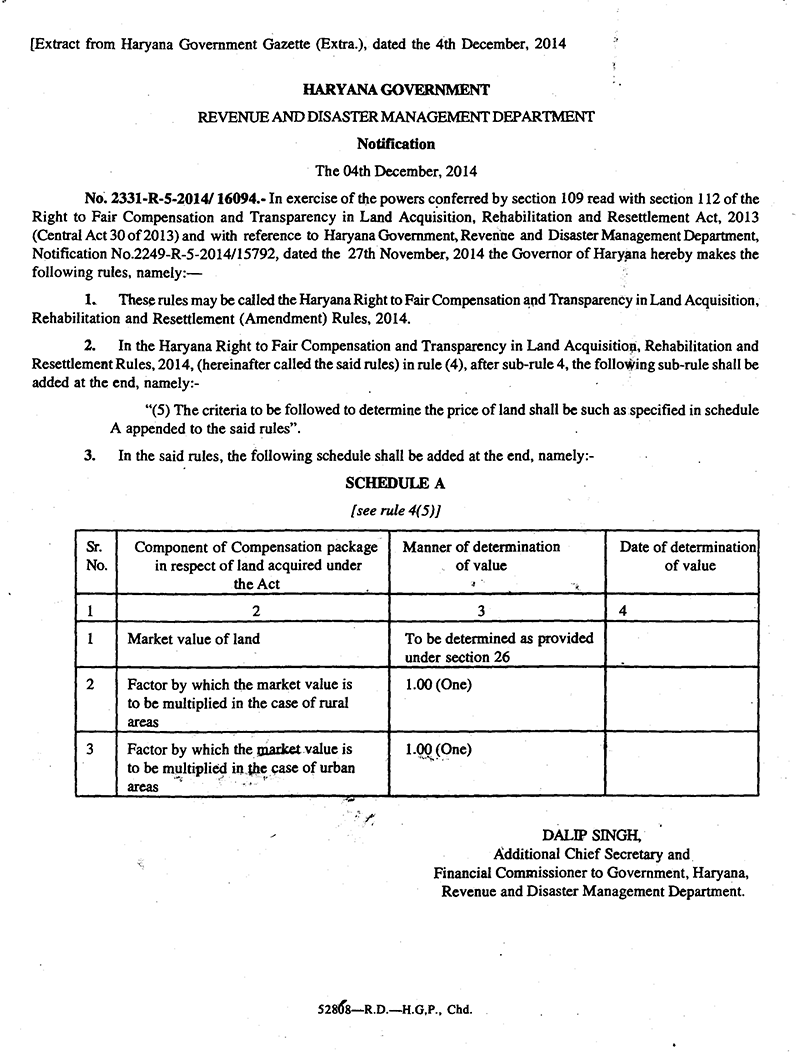 Defending the decision, Dalip Singh, the additional chief secretary who heads the Haryana Revenue Department, said this was done “to avoid discrimination and dispute.” Officials said it would be hard to explain why the compensation rate for one plot of land is higher than the adjacent plot, since in many parts of the state, rural areas seamlessly merge into urban.

While it is true that Haryana is among the more urbanised states in the country, until August 2014, the state’s revenue department maintained a categorisation of land as commercial, residential, institutional, and agricultural. Agricultural land itself was further categorised based on distance from national and state highways, which the government's critics say shows that the yardstick for calculating compensation cannot be the same.

In a statement to the press, the Aam Aadmi Party leader Yogendra Yadav has claimed that before the BJP came to power in Haryana, in August 2014, rural land was acquired at Seonathpur in the district of Mohindergarh at a compensation of four times the land's market value.

The case of other states

But Maharashtra has ensured that the Congress cannot take the moral high ground. The state, while it was still under Congress rule, on March 19, 2014, notified rules that fixed the compensation for all land – rural, urban, tribal – at a little over twice the market rate.

That perhaps explains why Anna Hazare came down from Maharashtra to Haryana to lead the protests against any further dilution of the land acquisition law.

Even if the opposition within and outside Parliament is able to force the government to junk its land ordinance and retain the consent and social impact assessment clauses, it would not impact the land compensation rates fixed by state governments.