Contribute Subscribe
Ad
Recent postings on social media of the destruction of 3,000 year-old Assyrian sculptures by ISIS highlights a new threat to cultural heritage in times of conflict.

Read symbolically, these actions can be interpreted as “cultural payback” for irreverent cartoons of the prophet Mohammad as a dog or with bombs hidden in his turban, themselves likely motivation for recent killings in Copenhagen and at the offices of the satirical magazine, Charlie Hebdo in Paris.

While the symbolic function of cultural icons has made them a target for destruction throughout history, recent changes in the nature of warfare and the media landscape have increased their vulnerability in times of conflict.

Taken together, recent changes in the nature of conflict and in the communication environment have created a new context in which the destruction of cultural icons by one of two individuals can be a relatively low-risk choice for extremists seeking maximum impact for their political agendas.

A modern form of terrorism

The modern communications environment provides extremist groups with the chance to garner unprecedented public attention for their cause. An increasing reliance on the global communication of extreme acts to convey a political message is apparent in videos of radical acts, such as internet videos of beheading prisoners or the multi-angled videoing of the execution of the Jordanian pilot, Muath al-Kaseasbeh.

Moreover, recent transformations of the media landscape have opened up new global channels of user-led communication. The pro-active media strategies of terrorist groups reach massive numbers of people. There is no chain of command and no membership roll—only a shared philosophy and a message to take action individually.

This new trend of “sequestered action”, in which individuals act without direction from an organisation but as part of a general ideological movement, protects terrorists from detection and widens the net of their potential effect.

It can be linked to an increase in terrorist attacks by one or two individuals working alone, such as the Boston Marathon bombings by two brothers in March 2013; the siege at the Lindt Café, Sydney by a single individual in December 2014; twin shootings in Paris at the Charlie Hebdo offices and a kosher market in Paris; and the twin shootings in Copenhagen at the central synagogue and Krudttønden café. 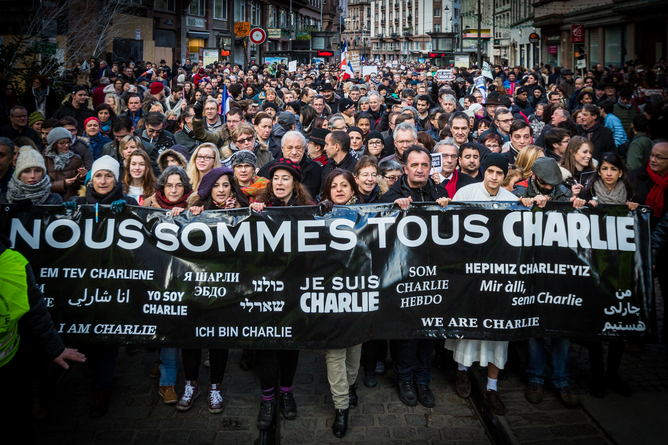 A protest against the Charlie Hebdo attack in Strasbourg on 11 January 2015. Claude Truong-Ngoc/Wikimedia Commons

The critical point here is the shift from the elaborate plots that have previously characterised jihadism to independent action by individuals.

While few people are willing to kill, many more would be willing to destroy a cultural monument. The centrality of visual images in the contemporary media environment provides new opportunities for, and increased impact from, the destruction of cultural icons, both locally and globally.

As the gap between rich and poor grows, both internationally and within nations, there are increased numbers of people who feel disenfranchised. A percentage of these will wish to take some form of action.

What can be done?

Firstly, we need to be more aware of the role that cultural icons play in conflict situations.

Cultural genocide is inextricably linked to human genocide and ethnic cleansing. Attacks on a community’s history —- its cultural identity and the ancient monuments that bear witness to centuries of presence —- are calculated.

Secondly, we should use networked media to diminish cultural myopia. A failure on the part of the West to seek understanding is exemplified in criticism of the sympathy that one quarter of Muslim people in Britain feel for the perpetrators of the Charlie Hebdo killings and in puzzled questioning about the 500 people who attended the funeral of Omar El-Hussein in Copenhagen.

In contrast, the capacity of social media to engender cross-cultural understandings is demonstrated in the twitter conversation that took place on January 30, 2015 between Eleanor Robson, “Vicious Assyrian” and “Dread Muslim”:

Dread Muslim: Walls are all you people care about.

Eleanor Robson: I have several dear friends & colleagues in Mosul, worked with them for 25 years to help protect their cultural heritage. You?

Dread Muslim: I have several brothers and sisters in Syria worked with them to save their future from dying. Saved many years of their life.

Eleanor Robson: We’re not so different; I use my professional skills to support life & work of Iraqi friends who care about its past & future.

Eleanor Robson: I agree that too many people care more about the past than the present but I’m not one of them.

Dread Muslim: May Allah guide You. Please forgive me if what I said sounded rude to you.

Eleanor Robson: That’s very generous; thank you. There’s nothing to forgive though :) I’ve been feeling the same way today …

An emergent irony is that many sites of World Heritage significance are in the hands of people who do not adhere to the same notions of heritage.

Never before has the world has so much capacity to communicate, so much need to communicate and so little success in people understanding each other.

As 'Jihadi John' is unmasked, counter-terrorism tactics must also be unpicked