Contribute Now
Ad
Last summer, major US comics publisher Marvel reincarnated one of its most popular characters, Thor, as a woman. Predictably, this prompted an avalanche of opinion, both positive and negative.

The positive reaction celebrated that the new character would provide a lead female role in a predominantly male cast of superheroes within mainstream comics. Mainstream comics desperately needed a new role model for the growing number of young comics readers – many of who are female.

Those who responded negatively highlighted the predictability of a big-breasted, blonde woman character displaying male characteristics and suggesting tokenism. Why not create new characters for women? Of course, there was also the inevitable negative response from comics fans who opposed the new Thor simply because she was a woman.

Marvel decided to respond. In the latest issue of the comic, the male villain, the Absorbing Man, says:

Thor? Are you kidding me? I’m supposed to call you Thor? Damn feminists are ruining everything… You wanna be a chick superhero? Fine. Who the hell cares? But get your own identity. Thor’s a dude. One of the last manly dudes still left. What’d you do, send him to sensitivity training so he’d stop calling Earth girls ‘wenches’?

In response Thor breaks his jaw with her hammer, thinking “That’s for saying ‘feminist’ like it’s a four-letter word, creep”. This scene is presented as proof that Thor can respond to sexism. 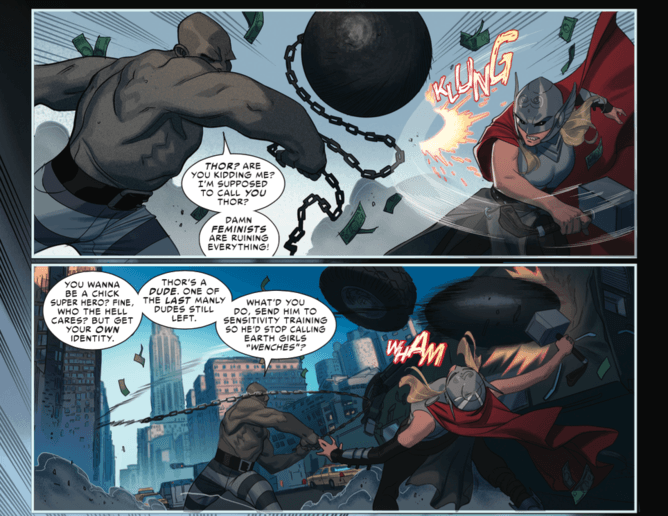 At first glance, it seems pretty cool. A comic facing criticism head on. But it’s important to note her action could be read as an emotional not rational response. And the idea of women being driven by emotions whilst men are ruled by reason dates back to Descartes. Presented hierarchically, this condition of men and women has been used historically to justify patriarchy. Although dismissed within feminist theory, such a belief continues to feed the stereotype of the “hysterical woman”. 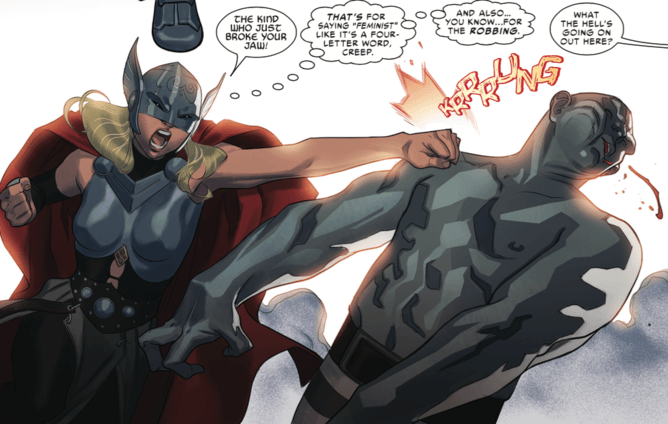 The scene would have been enhanced no end by a thoughtful rejoinder to Absorbing Man from Thor to accompany her hammer wielding. Thor could have asked any number of things. Why did he assume she was a feminist? Where does the idea of feminists “ruining everything” come from? What is a “chick” or a “dude” and what do those words imply – that women are animals but men are men? What does he assume a “manly” dude is? Someone without sensitivity?

But she doesn’t say any of these things. Because behind the Absorbing Man lies the publishing business of Marvel comics, negotiating the situation like the human man that sits behind the magical front of the Wizard of Oz.

Marvel’s backstage negotiation concerns how to ensure that Thor the woman, the sugar substitute, can be sweet enough to maintain existing consumers (readers) while enticing new ones. The artist and writer are directed accordingly. Versed in the tropes of traditional comics, their expertise is not in the philosophical and political debate surrounding feminism. Perhaps in the creation of a female lead character Marvel could have invited a guest editor, writer or artist? 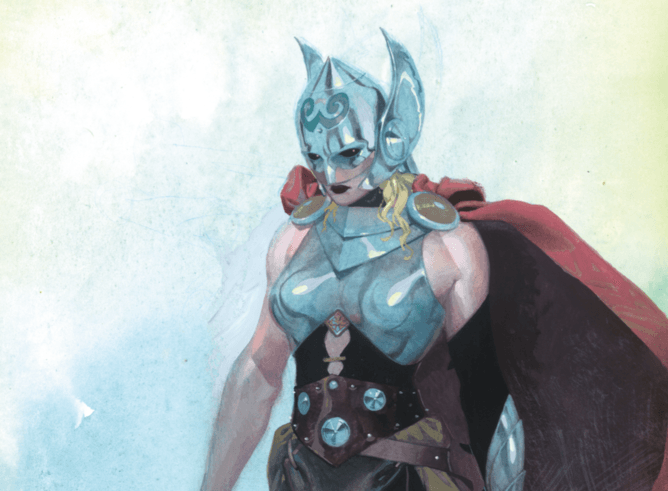 Where are the real women?

It’s also notable that men hold all three of these roles in the creation of the female Thor. Celebration is due around the appearance of imaginary lead women, but a heartier celebration would be around the inclusion of more women being employed to work on this project.

The male domination of the mainstream comics industry has not changed significantly since World War II. During the war, women took on the roles within the comics industry while men were away fighting, but only until the men returned.

Of course, the gender of a writer or artist does not in itself equate with a different approach. But gender balance and equality in the workplace has been one of the aims of feminism since the 1960s. This continues. A gender balance has never existed within government in the US or in the UK. It has never existed within the comics industry either, nor within many other areas of culture. Women are not a minority group, and women and girls have formed a significant percentage of comics readership historically.

But the status quo remains. And larger publishers cannot afford to publish what will not sell in enormous quantities. The larger bookshops have limited shelf space, restricted to selecting publications that attract high sales. The books that can be sold in the big bookshops gain the most publicity. Though mundane and simplistic to lay out the basic structure of the industry, it is easy to forget the primary motivation behind any business is profit, not ideology. The reluctance within mainstream comics to take risks should not surprise us.

If you have a bestselling chocolate cake, would you jeopardise sales by removing sugar from the recipe? Perhaps, but only if it could be guaranteed that it would taste the same with a replacement ingredient.

So to return to the villain’s conversation with Thor, the challenge to sexism here is limited. And it will remain so until values have shifted on a large scale. That is, when larger, more powerful components of society such as government and major institutions refuse to condone sexism as culturally acceptable, then wider cultural change will occur.

Only then will characters in comics be able to reflect such change without media comment or a threat to sales. To reintroduce Thor as a woman is no big step, it is simply an acknowledgement that such cultural adjustment needs to take place.