Become a Member
Ad
The Mumbai Port Trust is the largest real estate owner in Mumbai, in possession of one-eighth the area of the island city. Mumbai’s eastern waterfront stretches from Sassoon Dock in Colaba in the south to Wadala in the north. This strip covers 709.51 hectares of the total 752.72 hectares of land owned by the Mumbai Port Trust in the city.

In June 2014 the ministry of shipping constituted the Mumbai Port Land Development Committee to prepare a road map for the development of the Mumbai Port Trust waterfront and lands. The media has since reported widely on proposed redevelopments – ranging from five-star floating hotels to a world-class cruise terminal.

Reports state that Mumbai’s port land is largely without any “productive activity” and it is time to redevelop this under-utilised land parcel in a land-starved city. These contentions are one-sided. Scores of workers earn their living from workshops and small industries located in large informal settlements on the port land.

These settlements are important cogs in the interconnected wheels of an informal economy. They are places of work and residence to a large number of those engaged in ancillary informal industries. While taking a very narrow view of “productive activity” and mainly equating it with large-scale industrial production in the formal economy, reports have refused to take due cognisance of a flourishing informal economy.

If one has to go by numbers provided in the Mumbai Port Land Development Committee report, Dalit and Muslim migrants have settled on less than 1% of the land. The contribution they are making to Mumbai’s economy is significant and the forward and backward linkages of these activities are mind-boggling.

Focusing on these existing realities, this photo essay highlights invisible lives on the Mumbai Port Trust land. The workers of Darukhana, the ship-breaking yard and multiple ancillary industries are captured on the job. The Colaba Koliwada, or fishing village, and slums in Wadala have also been highlighted.

Providing a reminder of their existence in a city racing towards becoming a global financial centre, the essay captures the life and livelihood linkages between informal settlements and the invisible informal industry. It also draws attention to the spate of forced evictions that have taken place and the threat faced by thousands more who are “in the way of” proposed developments on the Mumbai Port Trust land. 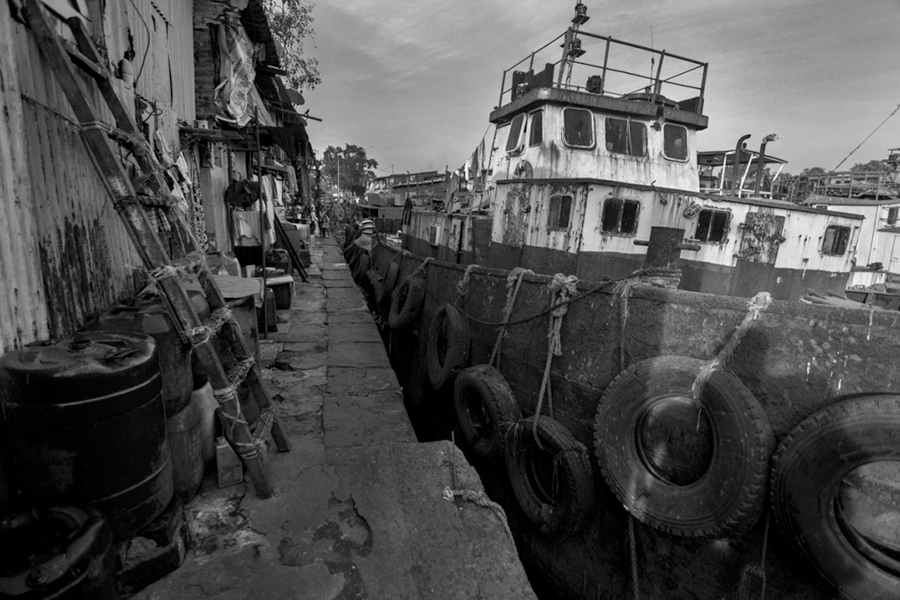 Where houses merge into work places: an old ship waiting to come under the hammer at one of the wharves of Kolsa Bunder. 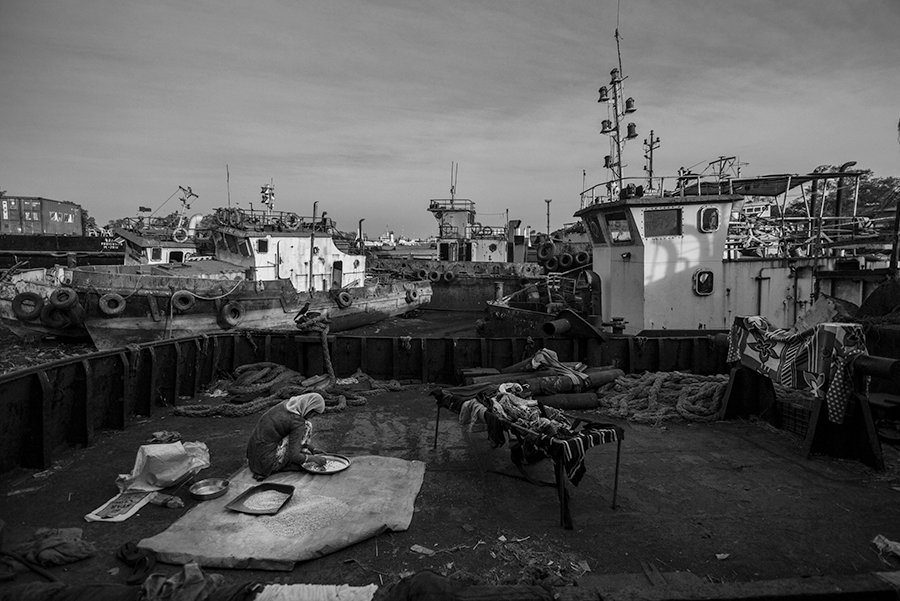 Extended homes on ships waiting to be dismantled.

Darukhana is the ship-breaking area in the backyard of the Mumbai Port. This labour-intensive industry generated employment for thousands till it came to a grinding halt over environmental concerns in October 2014. The dismantled ships and subsequent recycling of scrap material was the backbone of perhaps the largest steel processing industry in the city. After the ban on ship-breaking, the scale of activities has receded. But the range of activities that continue are overwhelming.  Many small sailing boats, ships and vessels are repaired, overhauled or renovated around the edges of Reti Bunder, a locality adjacent to Kolsa Bunder. 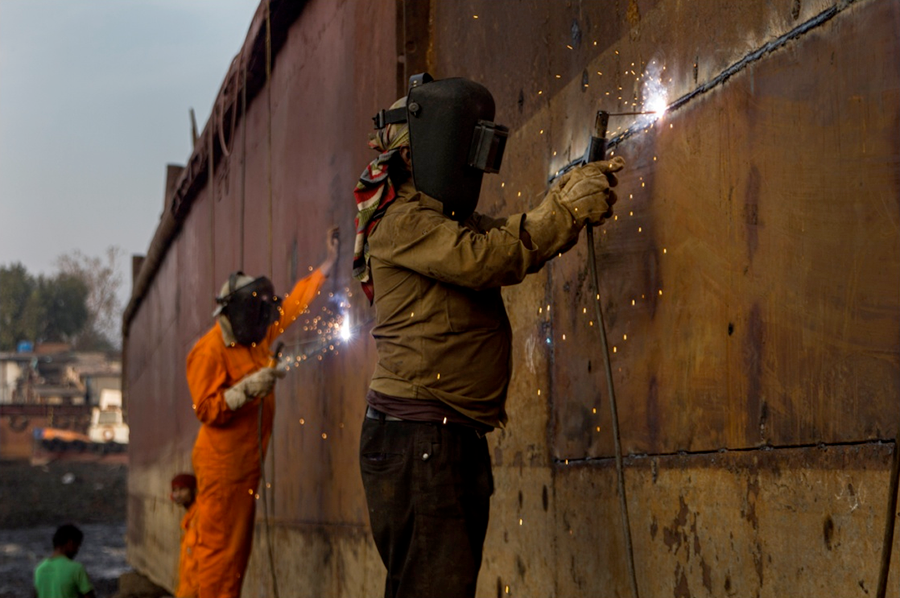 Ships being repaired at Kolsa Bunder. 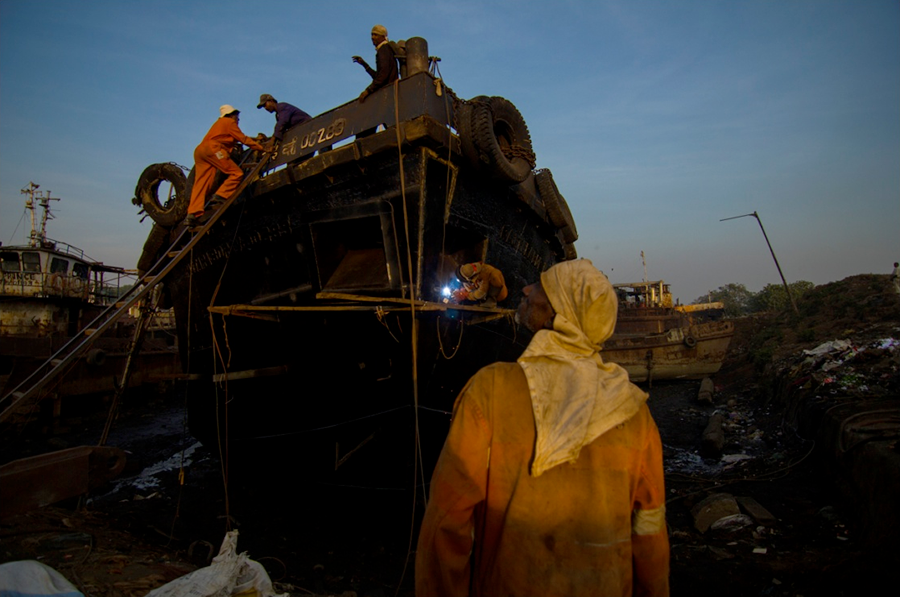 The complete dismantling of a medium-size vessel lasts for two months and directly employs up to 30 people. Workers are mostly migrant, contract labourers from Odisha, Kolkata and Bihar. They work on the ship breaking or repairing site, live in warehouses nearby and toil without any security. 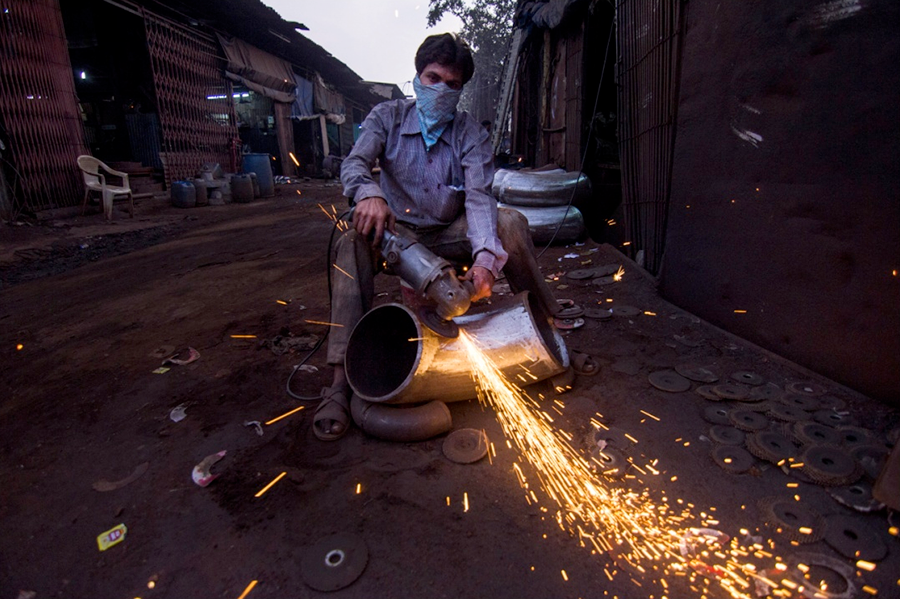 The various parts of a dismantled ship are segregated, cut, reprocessed and remodelled as marketable sub-products. The by-lanes of Reti Bunder and Kolsa Bunder are full of such workshops. The numerous dark, cramped workshops process, reprocess and reproduce steel bars, chains, disks and multiple spare-parts used across small scale industries in the city. 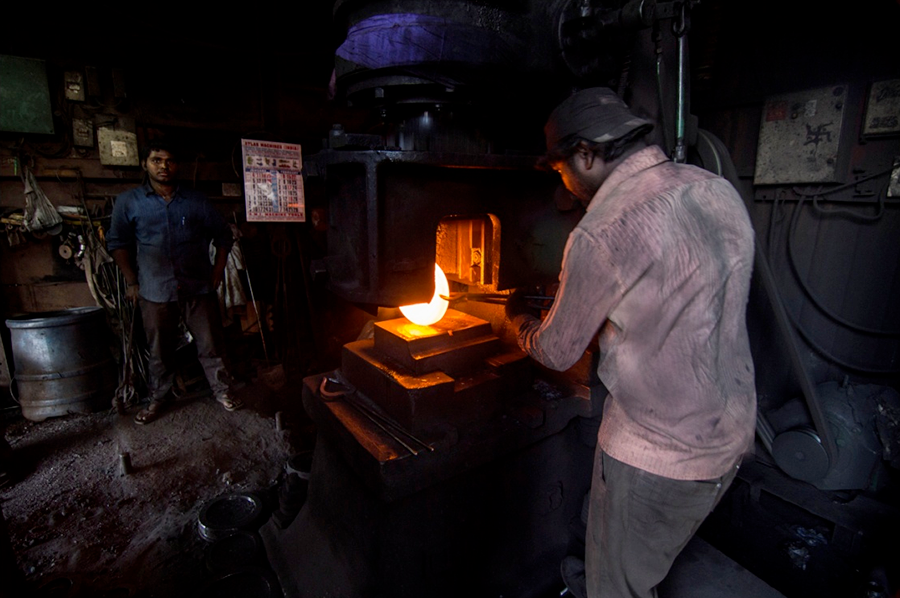 The work involves risk and demands skills. These hot, humid workshops are abuzz with hissing sounds and a sharp, pungent smell of melting steel. 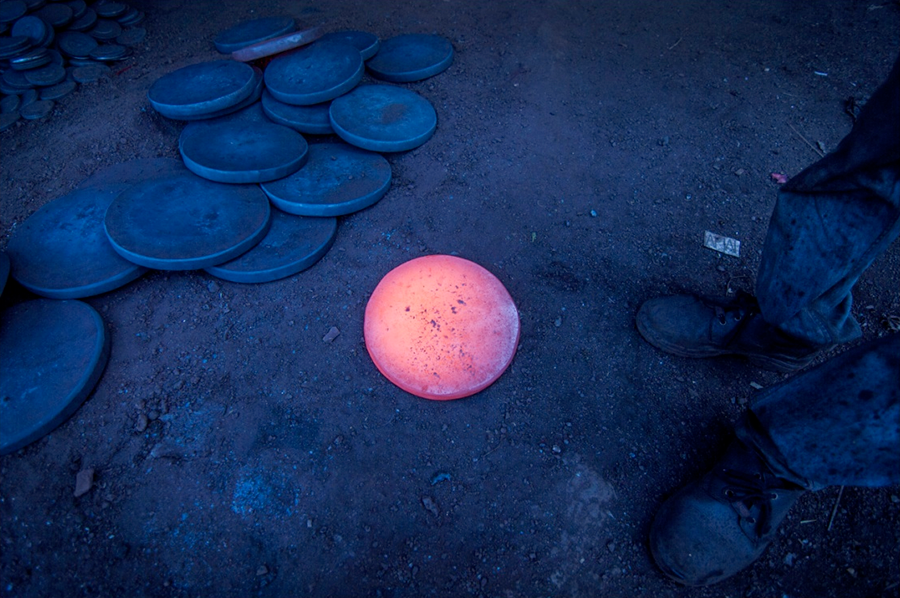 Red, hot steel discs just out of the furnace. 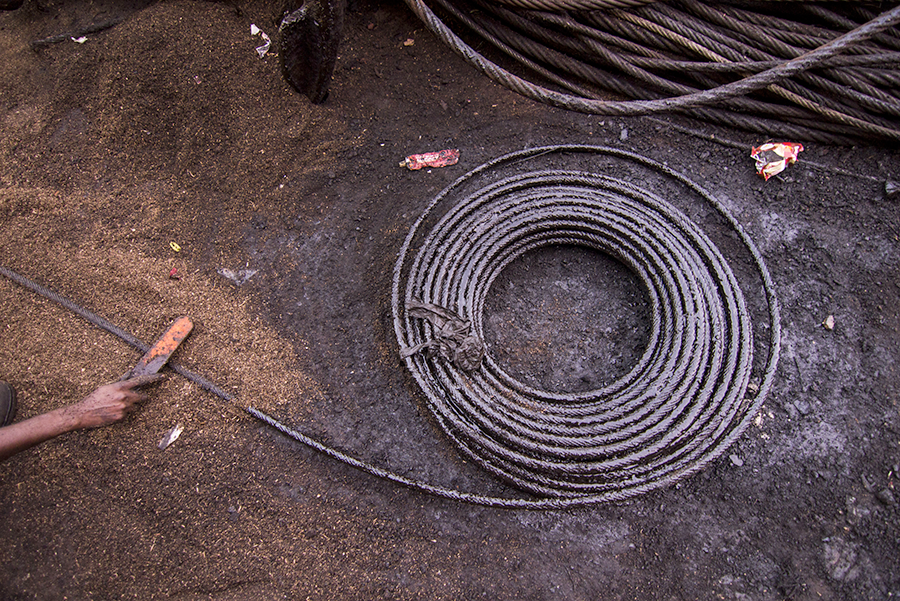 With more cleaning and de-greasing, these wires will be ready to use as pulleys in small-sized mechanical cranes or at construction sites. The sawdust used here is available in the neighbouring Lakda Bunder. Businesses are completely organic. 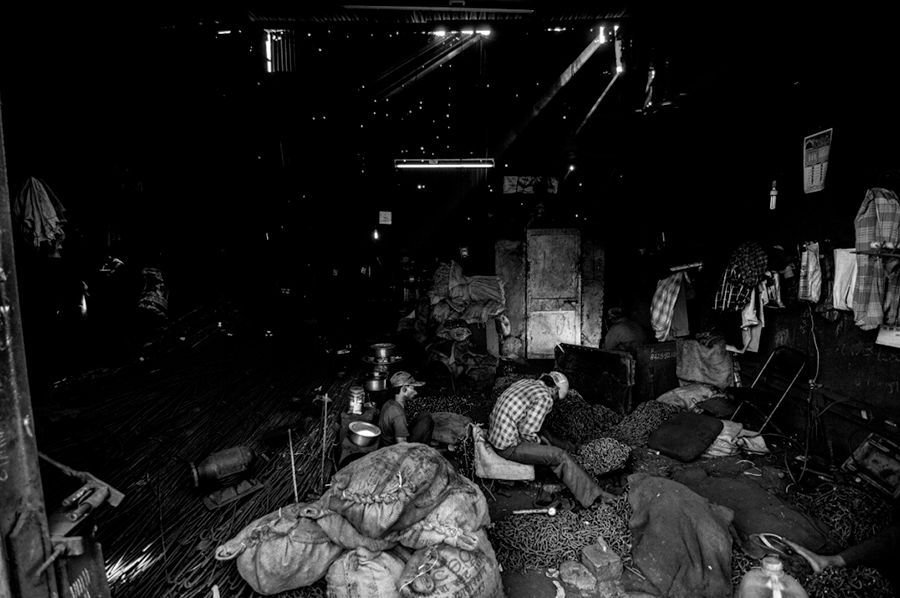 Industrious spirits make ways into incommodious, dingy tenements, small roads and allies outside Reti Bunder. Even leftover iron and steel pieces and debris earn handsome revenues in scrap markets. Scrap collection and segregation is a lucrative business in the city. 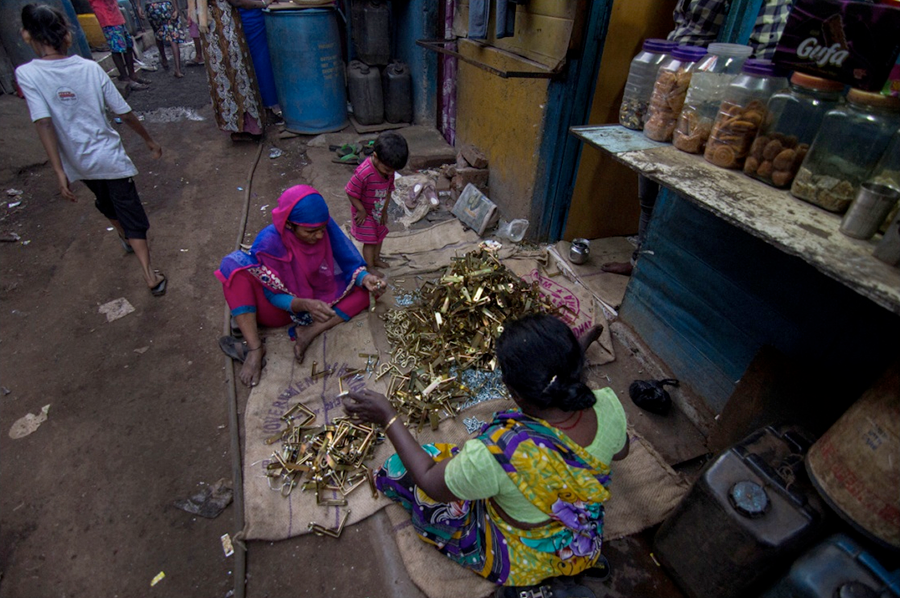 Women are often seen engaged in cleaning-polishing, in packing in small units or engaged in thriving home-based units. 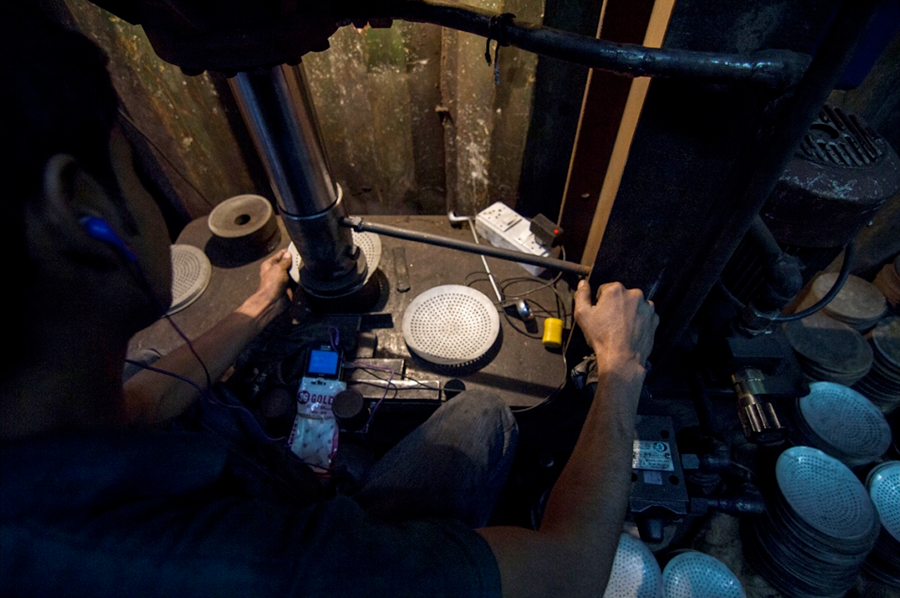 It is known that popular namkeen snacks, or savouries, such as sev, bhujia, chakli, chips, etc, are made in Dharavi, but it is not known that the jali sanchas, or moulds, used for making these products are produced in the tenements of Kolsa Bunder. 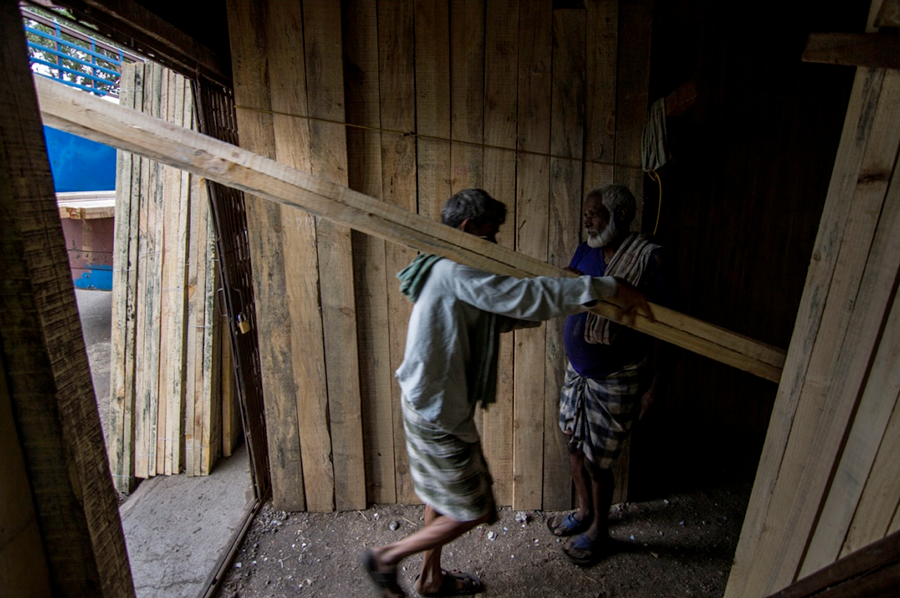 Bakeries in the city rely on firewood that is stored, cut and processed within workshops at Lakda Bunder. Moreover, the thriving construction industry in Mumbai demands a continuous supply of quality timber that is sourced primarily from here. The need for labour and logistical support generates steady employment at Lakda Bunder. 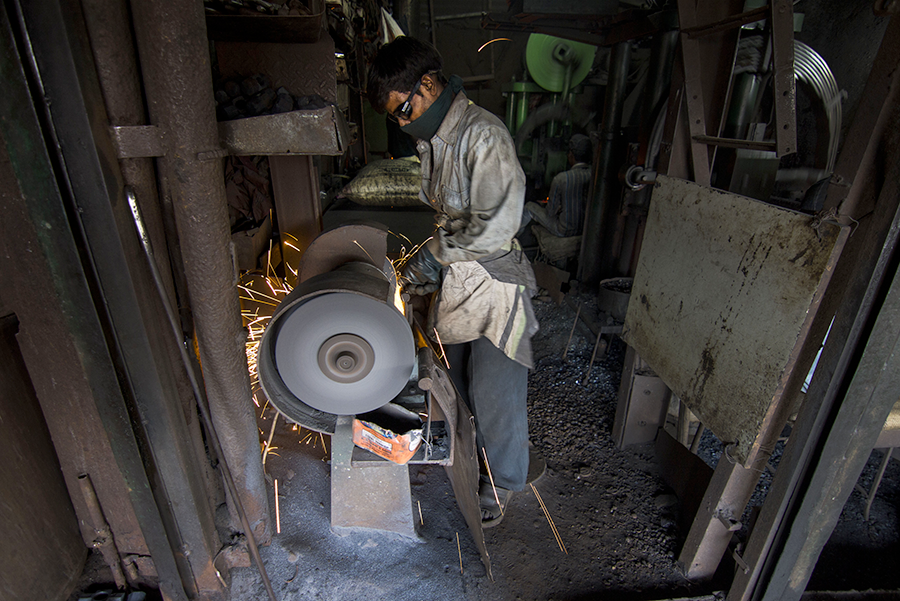 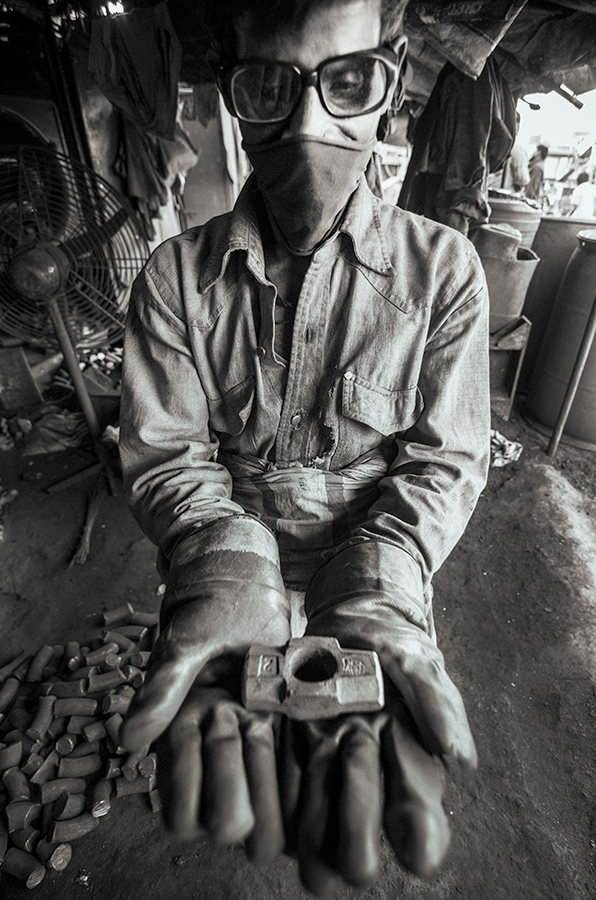 A finished good is ready to be sold in a hardware shop in Null Bazar or Vashi.

Is this not production? Is this any less than entrepreneurship? Why then do these invisible lives not count in city visions of our planners and politicians?

Darukhana is one neighbourhood on the eastern waterfront of Mumbai. There are many more such neighborhoods on the Mumbai Port Trust land, each having a separate history and fabric.

Jamsetji Bunder in Colaba is also located on land owned by the Mumbai Port Trust. It is home to a settlement of more than 300 families. Within this settlement is the Colaba Koliwada, a fishing village. While there are no clear lines between the Koliwada and settlements that have developed around it, the Koliwada comprises around 43 Koli houses, fish drying areas, a jetty for fishing boats and direct access to the sea.

These 43 house plots and areas for fish drying have been officially allotted by the Mumbai Port Trust, and oral narratives speak of their existence before the British era. The issues of the Kolis are that of housing as well as a livelihood that is intricately linked to the sea: they require natural sea currents so that fish can be caught within the limit assigned to them. The proposed marina and floating hotel in Colaba will prevent natural sea currents thus threatening the very basis of their livelihood. 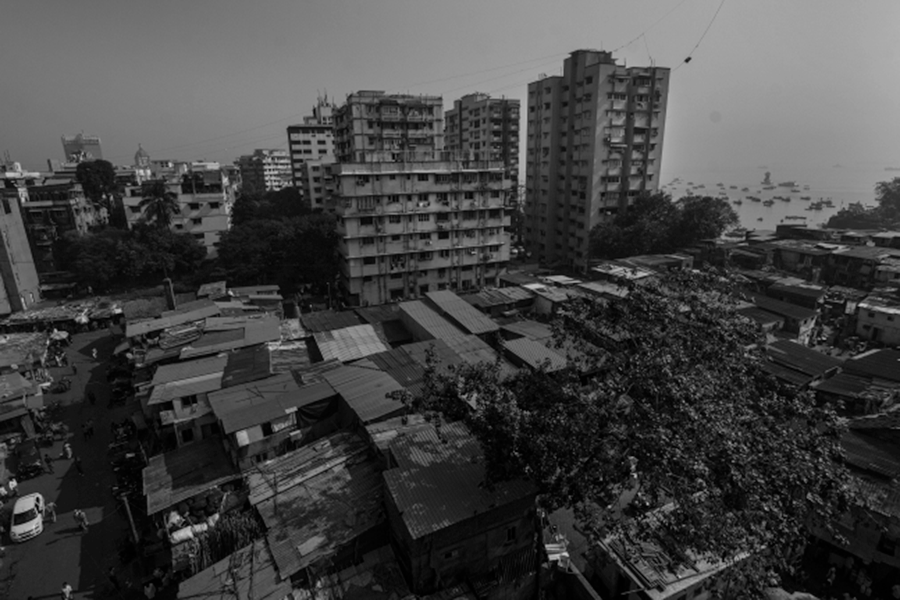 An aerial view of one section of the Koliwada at Jamsetji Bunder, Colaba. 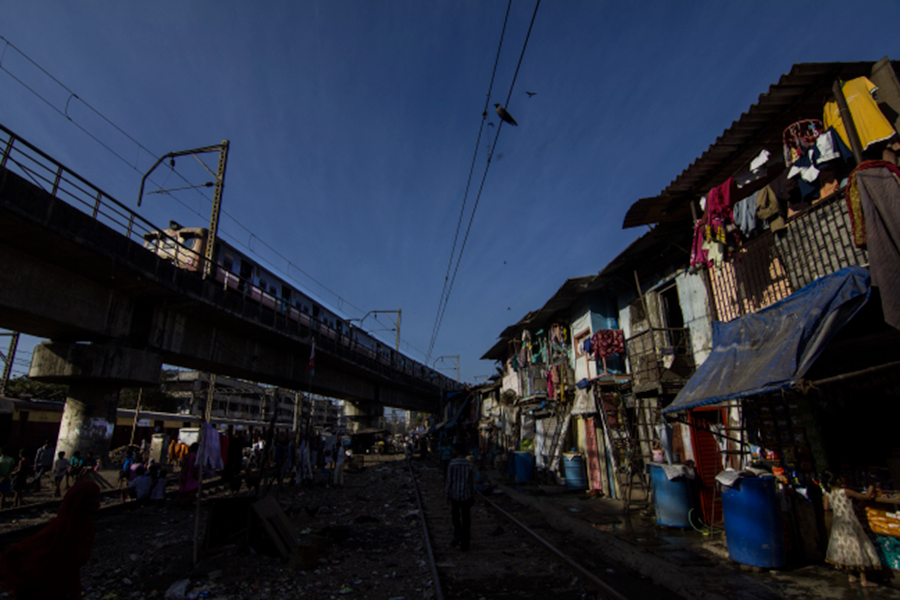 Trains cross paths at Wadala: the fate of these slum settlements remain in limbo.

The threat of demolition looms larger over slums in Wadala like Shahid Bhagat Singh Nagar, Dalit Nagar and many small settlements around railway Gate Number 4 and 5. 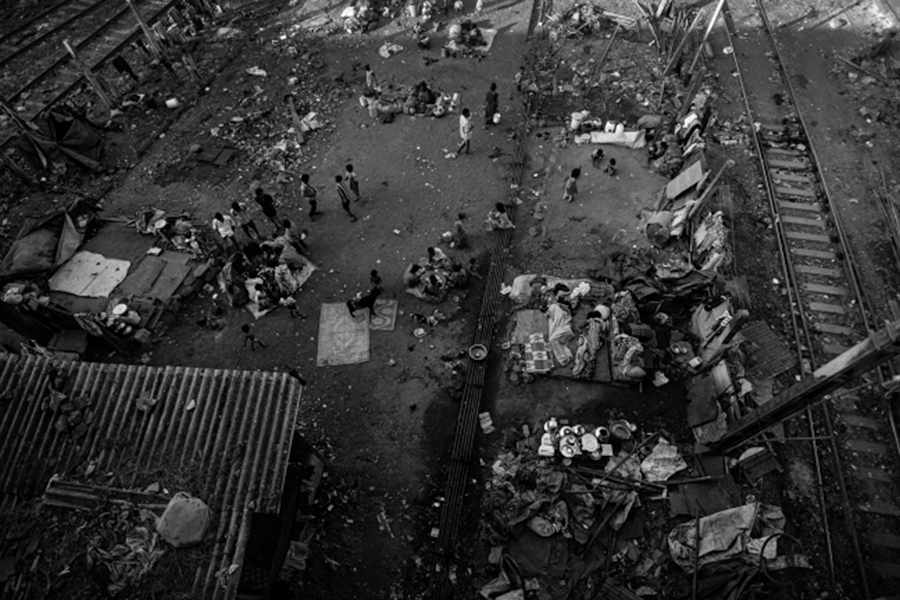 Asleep in makeshift homes along the railway track at Wadala.

The ministry of shipping and the Mumbai Port Trust are reluctant to take any note of these settlers, the economic activities they are involved in or their right to a decent, dignified life; instead they are termed “encroachers”. 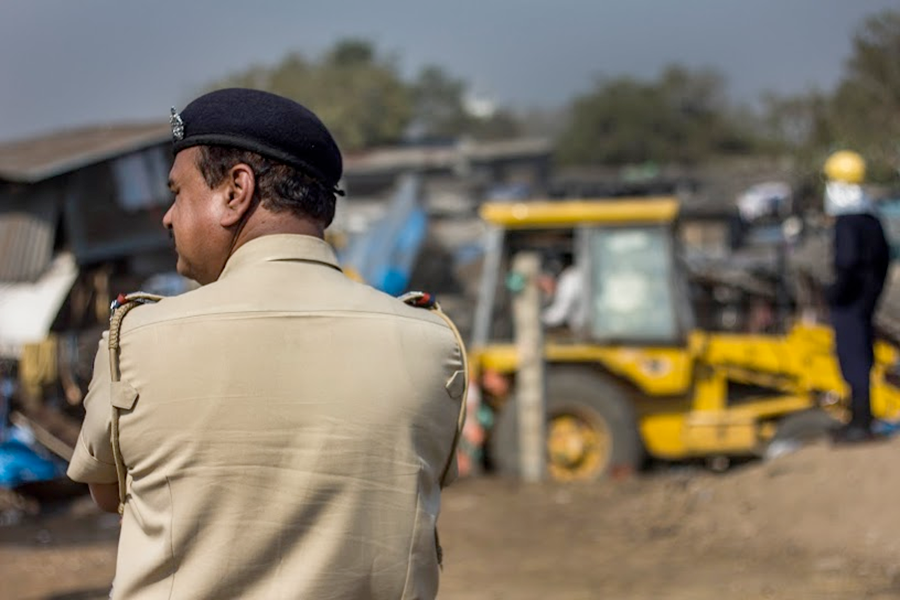 Powder Bunder, January 8, 2015: ‘Law and Order’ being maintained, a demolition drive in progress. 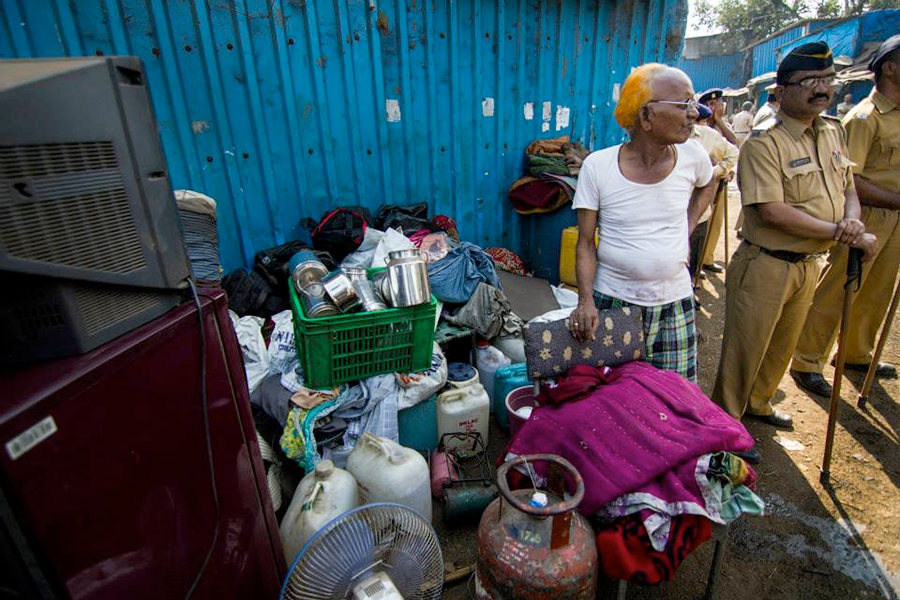 With nowhere to go after the demolitions.

Ironically, while thriving neighbourhoods are seen as a hindrance and the lives and aspirations here are negated, plans of developing a “smart city” in each of India’s 12 major ports are being reported. The 12 major ports in India altogether possess 2.64 lakh acres of land and most port trusts regard this land a major resource for futuristic expansion of port operations.

Given the prime locality of ports, the land has acquired status of a valuable real estate asset.  As per a recent declaration in the 2015 budget, the central government is planning to corporatise all major ports.

Are the working class not equal stakeholders and participants in the process of city development? What good would it serve by un-personing these persons and un-recognising the spaces they rightfully claim?