Become a Member
Ad
One day in mid-February, a group of final year students at Mangalore’s Govinda Dasa college decided to relieve the tedium of their classes with some harmless fun. Bringing out their mobile phones, the 20-year-olds posed for pictures. Although they were breaking the college’s ban on mobile phones in classrooms, none of them feared any serious trouble.

A few days later, however, one of the boys in the pictures, Mohammed Riyaz, was picked up forcibly from outside his house by a group of men. He was blind-folded, taken to an unknown location, repeatedly beaten over three hours. His assualters, not much older than him, let him off with a warning. “They told me not to speak with Hindu girls,” Riyaz recalled.

As it turned out, one of the pictures featuring Riyaz and his friends, had gone viral on the messaging service WhatsApp and had found its way to the Facebook pages of Hindutva organisations.

The photograph showed Riyaz’s friend, Mohammed Swali, lying across the laps of five of their girl classmates, all of whom were smiling. “None of the girls objected and no one forced them to smile in photo,” said Riyaz.

But for the Hindutva groups, it was enough that the girls were Hindus, while the boys were Muslim. One of them, the Hindu Jagran Vedike, demanded that action be taken against the students. Hearing of the furore, Swali went into hiding, but Riyaz could not escape Hindutva ire. A week after his release, his left leg was still swollen and scarred and he had visible injuries on his head. 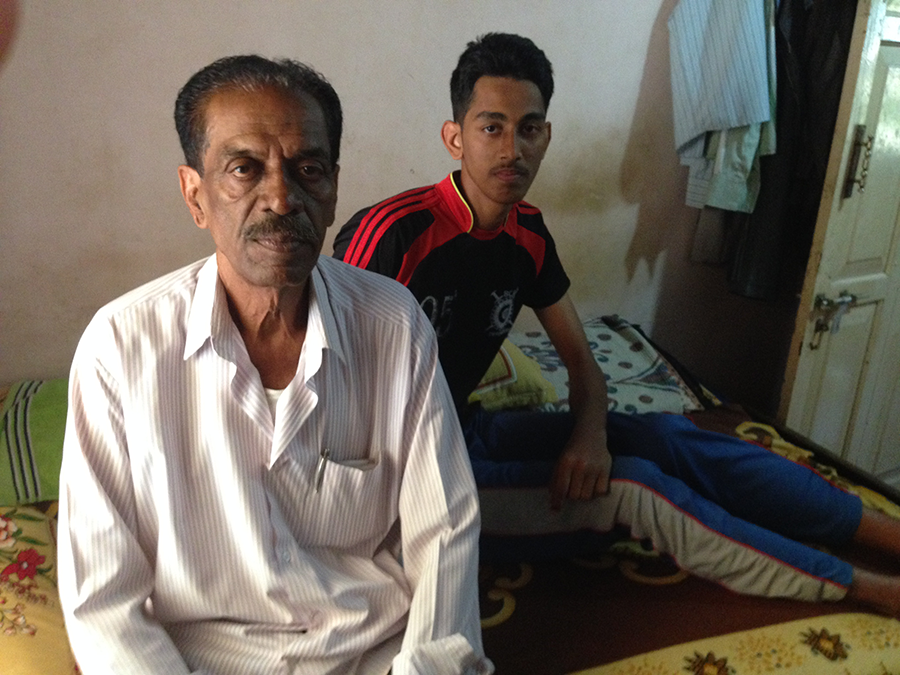 Riyaz’s case made local and national headlines but activists say that most cases of religion-based moral policing that occur almost every day in Dakshin Kannada, where Mangalore is located, simply go unreported.

The district which lies on the coast of Karnataka is one of the landing grounds for Hindutva in southern India. Saffron politics arrived here as far back as the 1950s. The first elected representative of the Jan Sangh in south India was to an Udupi municipality in 1968. While the Jan Sangh didn’t aim for political power, it remained socially active in the region. Then, in the 90s, the Ram Janmabhoomi movement caught the imagination of millions of Hindus, including those in Dakshin Kannada.

Long-time Mangalore residents point to the late 90s as the time when clashes between Hindus and Muslims started becoming common. Inter-religious couples and friends from different communities were warned and sometimes beaten for spending time together. Hindu groups made their presence even more conspicuous when the BJP formed the government in Karnataka in 2008. Fringe groups like the Sri Ram Sene attacked women who they thought defied Indian culture.

At this time, Hindutva ire also became directed at the Christians in Mangalore. “Earlier there were communal clashes between Hindus and Muslims but a few years ago a church here in the heart of the town was attacked,” said Fr Denzil Lobo, rector of the St Aloysius College institutions. Bajrang Dal activists attacked a nunnery in Mangalore city in September 2008, triggering off a spate of attacks against 15 more churches in the coastal district.

Gurudath Kamath recalls when he was attacked in July 2012 by Hindu activists who raided a private party at a resort. In the incident that became famous as the ‘homestay attack’ case a group of men roughed up the boys, slapped the girls and accused them of behaving indecently. “I had gone out to a shop and when I came back they caught me and said ‘See, he is a Muslim’,” Kamath said. “I had a funky hairstyle and hair tattoos then that had become a stereotype of how Muslim boys dress. The basic thing about all these fights is that they think Hindus and Muslims are hanging out together.”

“Since 2002, there has been a regularity of the violence at the ground level and now the polarization of the communities has reached its peak,” said K Phaniraj of the Karnataka Komu Souharda Vedike (Karnataka Forum for Communal Harmony). “Hindus who earlier backed the RSS but still didn’t want violence in their neighbourhoods are now saying that violence against Muslims is acceptable. This is the change that the Sangh Parivar has achieved.”

Meanwhile, a force to counter the Hindu fundamentalist groups has been rising in the region over the past decade. What started out as the Karnataka Forum for Dignity has now become a political party – the Popular Front of India. Since 2010, the PFI, which says it is a coalition of Muslims, Dalits and the backward classes, has been holding rallies through Dakshin Kannada. “Their growth has been meteoric. The PFI has cashed in on a rage within the Muslim community and it particularly attracts young people in the 18-20 group. But at the ground level they have also been active in moral policing,” says Phaniraj.

The various groups are now busy showing off their ground support in Karnakata. If the Vishva Hindu Parishad holds a series of meetings called Virat Hindu Samajotsavas, the PFI takes out Unity Marches. The run-up to both is often communally charged. 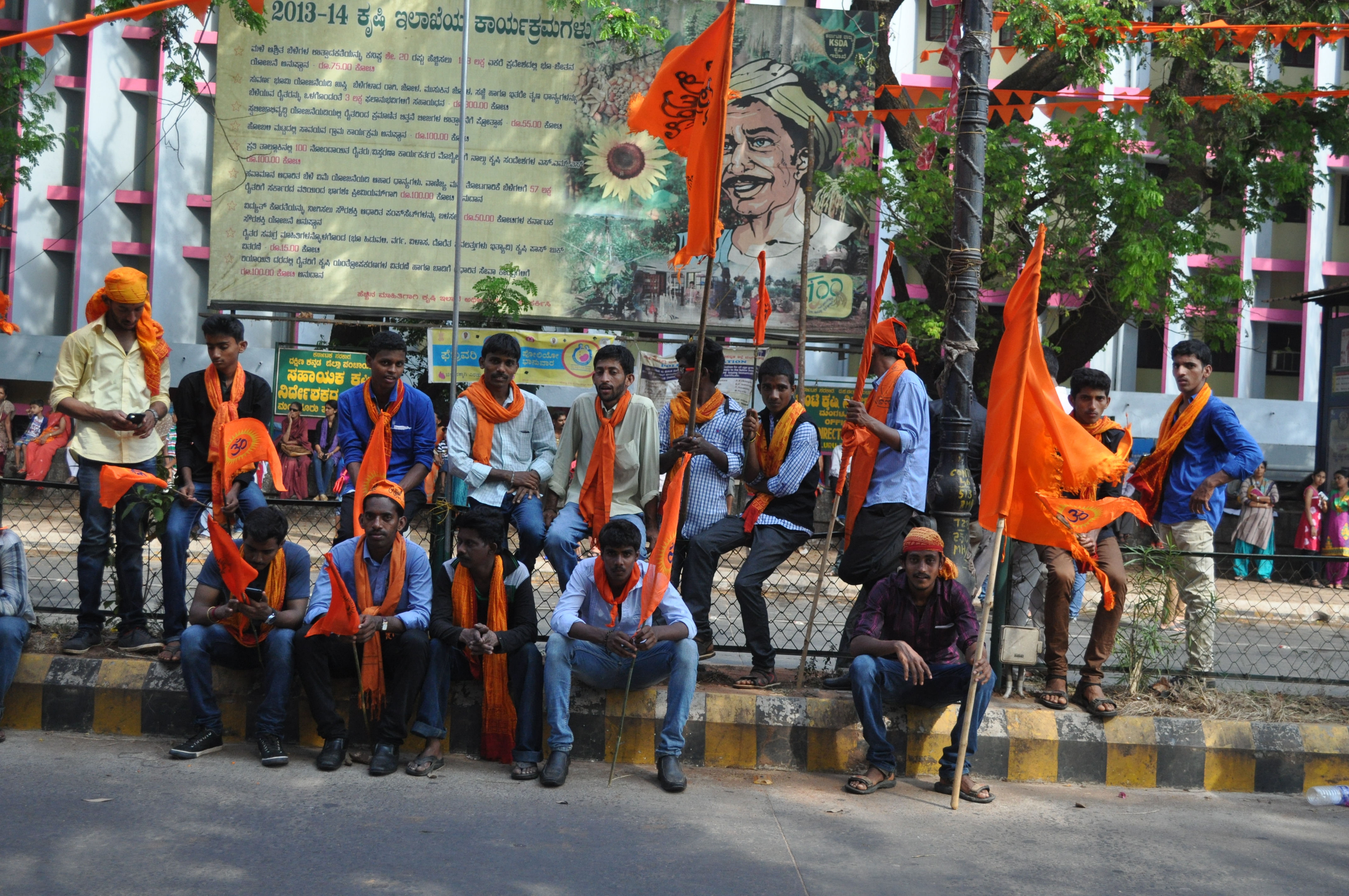 Young men waiting for a VHP samajotsava in Mangalore to begin

“More than attacks it is the rhetoric that goes on that really spoils the environment. There are posters around town directly attacking the communities with derogatory remarks,” said Lobo.

Violence is common after the events. In mid-February, a VHP samajotsava in Puttur ended with its participants attacking a church on their way home. A few days later, a PFI rally in Shivamogga district ended in a communal clash in which one man was killed and two others injured.

“Whatever is being done by the Hindu fundamentalist groups is now being imitated by other groups,” said Mangalore activist Vidya Dinker. “You scratch the surface and they are all thinking along the same communal lines and this mistrust of the other. This mistrust has been growing for so long that it’s also there within every home and that is the danger.”

Secular activists like Dinker and Phaniraj, who have been trying to fight Hindutva influence and violence in Mangalore for years, are now noticing that the minority communities are now marching out their own moral brigades. “Earlier, while there was the BJP government in the state, the Hindu moral police were out in full force. Now since Siddaramaiah has come as Chief Minister we are seeing the Muslim moral police too,” said Muneer Katipalla, state president of the Democratic Youth Federation of India.

In December last year a group called the Muslim Defence Force sent messages out via WhatsApp and Facebook warning young Muslim men and women against “un-Islamic activities”. The messages threatened young Muslim women for speaking to Hindu men. Some even asked women to ‘unfriend’ Hindu men on Facebook.

Despite all this, boys and girls are more open now than a decade ago, says Phaniraj. "Girls have more male friends now. Young people are not afraid of going to restaurants, ice cream parlours or movies with their colleagues and classmates," he said
But many who have a choice move out of the city. “I would not like to go back to Mangalore," said Kamath who now runs his own event management company in Bangalore. "Nowadays, none of my friends are back home either. Everyone wants to move out to Bangalore, Delhi, Mumbai or abroad.”

In Mangalore's communally charged atmosphere, the young students of Govinda Dasa college have shown remarkable unity. The college initially suspended the six students in the photograph, apart from Riyaz. “They were suspended first of all for bringing mobile phones into the class and breaking rules like touching each other and lying on laps, which is considered indecent,” said Professor Rajamohan Rao, principal of the college.  Students of the college protested the suspension. In an opinion survey conducted by the administration, 83% of the student body said the action was unwarranted, following which the college revoked the suspension.

But the support of his college mates has not allayed Riyaz’s fears. Preparing for his final exams, he says he wishes to work abroad as a software engineer. He is not sure whether it will work out, but he hopes it does, for staying in Mangalore makes him nervous. “I do feel scared now to go out. I wonder if I go somewhere, someone will see me and beat me again.”

In Old Delhi, air of wariness hangs over long-time neighbours after temple is vandalised