Mar 12, 2015 · 12:30 pm
Bill Laurance, The Conversation
In the past decade, two-thirds of the world’s forest elephants – which live only in Africa’s equatorial rainforests – have been slaughtered by poachers for their ivory tusks.

Why? One reason is that poachers are now armed with far more lethal technologies than they once had. Instead of arrows and spears, they now have powerful rifles and cable snares.

But an even bigger reason is that, since the year 2000, more than 50,000 kilometres of roads have been bulldozed into the Congo Basin, mostly by industrial loggers, opening up the region to waves of commercial and subsistence hunters. The elephants simply have nowhere left to hide.

This scene of ecological invasion is being repeated over and over, all around the world. The last remnants of nature are in retreat, put to flight by roads and other human infrastructure.

In the Amazon and lower Andes, for instance, plans are afoot to build more than 150 new hydroelectric dams, each of which will require networks of roads for dam and power-line construction. The 12 dams planned for the Tapajós River, a major tributary of the Amazon, will cause an estimated 1 million hectares of extra deforestation by 2032.

The Amazon also has almost 53,000 active mining leases, covering some 20% of the basin. Building roads to develop these leases opens a Pandora’s Box of problems, such as illegal deforestation and fires, poaching, illegal gold mining and rampant land speculation. 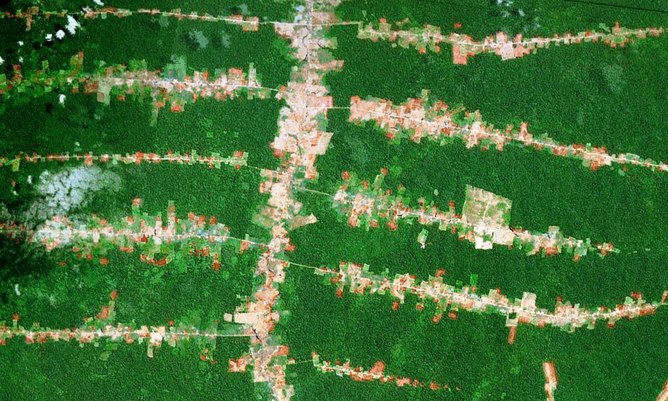 In the Amazon, 95% of all deforestation occurs within 5 km of a road. Google Earth

If you want to see the wilds of Africa, don’t wait. Go today, because Africa is being transformed by a feeding frenzy of foreign mining investments. China alone is pouring more than US$100 billion (A$130 billion) per year into mining projects on the continent, with India, Brazil, Canada and Australia not far behind.

All this mining is leading to an avalanche of new African roads and development projects. My research colleagues and I are currently trying to assess the environmental damage that will arise from 29 massive “development corridors” that will criss-cross Sub-Saharan Africa, opening up many wild and semi-wild areas to human pressures.

In northern Sumatra, Indonesia, a 400 km road network called Ladia Galaska is about to slice into the last place on Earth where orangutans, tigers, elephants and rhinos still co-exist.

Even Australia isn’t immune from the global tsunami of infrastructure expansion. As part of the Developing Northern Australia push, the federal and several state governments are considering vast new investments in roads, hydroelectric projects, and agricultural intensification.

All this is happening at a time when we’re seeing dramatic and widespread population declines of many wildlife species in northern Australia.

If the current situation seems scary, just wait. At the recent G20 summit in Australia, the 20 largest economies on the planet pledged to pour between US$60 trillion and US$70 trillion into new infrastructure over the next 15 years. To put that into perspective, the estimated value of all existing infrastructure on Earth is around US$56 trillion.

The G20’s pledge would be the largest financial transaction in human history. Unless these projects are managed carefully, their ecological consequences could be almost unthinkable.

Australia is right at the heart of this effort. The G20 immediately committed funds to set up a new Global Infrastructure Hub in Sydney, which aims to gather some US$2 trillion in short-term support for new infrastructure in the Asia-Pacific region.

It’s for these reasons that my colleagues and I have written nine recommendations for reducing the global impacts of infrastructure developments, published in the latest edition of the journal Current Biology. This follows on from another study I led, to devise “A global strategy for road building”.

If taken seriously, we believe these initiatives could help to make roads, dams, mines, and energy projects more sustainable. Our focus is on the financial institutions, corporations, governments, donors and lenders who are building and promoting these projects.

1. Work to keep intact wilderness areas road-free, according to the maxim “avoid the first cut”. Once made, narrow cuts through forested areas tend to grow and spread.
2. Recognise that efforts to pave existing roads also have consequences. Paved roads mean greater, year-round access to wilderness areas and faster vehicle speeds that put wildlife at more risk.
3. Realise that the secondary effects of projects such as roads and mines are often worse than the project itself. Environmental impact assessments must include both direct and indirect effects, such as pollution or poaching.

Secondary effects can be fatal. As shown in this shocking video, a new highway has opened up the Peruvian Amazon to devastating damage from illegal gold miners.

* Put more emphasis on so-called “offshore” projects, which might be deep in wilderness areas but don’t require new road networks. Instead, workers use helicopters or traverse rivers to reach the site.
* Encourage lenders and other involved parties to get involved in projects early, when plans can be more easily shaped or cancelled altogether.
* Develop better tools to allow financial institutions and others to evaluate the environmental and social consequences of projects.
* Financial institutions must also enlist people with appropriate environmental and social expertise. Too often, experts are overridden by economists and project proponents.
* Resist the temptation to allow projects with obvious environmental or social harms to proceed based on the fear that if a responsible development bank doesn’t do it, someone else will. We call this “the ‘devil you know’ dilemma”.
* Seek greater involvement from non-governmental organisations and the public, especially those who stand to be affected directly.

Our research is being used as the foundation for a global lobbying effort by scientists and environmentalists to persuade the G20 leaders to rethink their wildly ambitious infrastructure bonanza.

Our statement is being supported by some of the world’s most eminent research leaders, members of national science academies, and even holders of Knighthoods and other similar honours.

Nobody is saying that the world doesn’t need more and better infrastructure, especially in developing nations trying to raise their living standards.

But the business-as-usual model simply isn’t working. The price for nature and our global environment is far too high. For our natural world, we are staring straight at a fatal future.

This article was originally published by The Conversation.

Evidence says it's time for a depth limit on trawling