Contribute Now
Ad
Over the past decade, tattoos have become a fashion statement among urban Indian youth, but body art has been practised for centuries many Indian communities. Known as godna, a term widely used among tribals in central and eastern India, it serves different purposes in different communities, as a journey to villages in Jharkand and Bihar revealed. 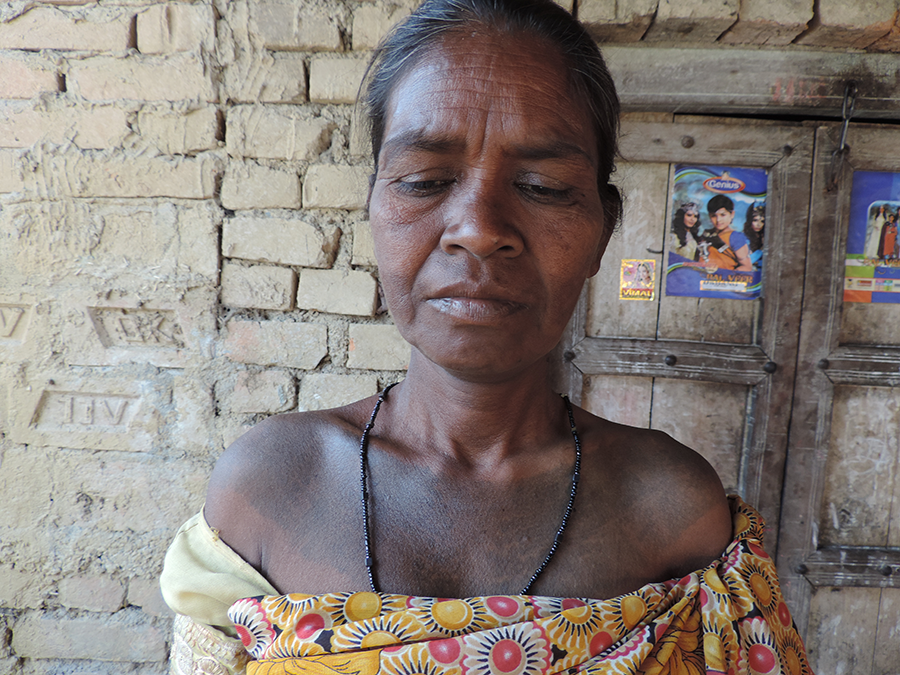 The Dhanuks in Bihar, traditionally considered a low-caste community, believe tattoos make women look ugly and thus protect them from covetous upper-caste men or, in the past, from kings and nobles. “Godna is used to de-glamourise women so that they can evade the eyes of influential sex predators,” said Dhiraj Singh, a social activist in Bhagalpur, who grew up seeing this practice in his village in Jehanabad district, dominated by upper caste Bhumihars. 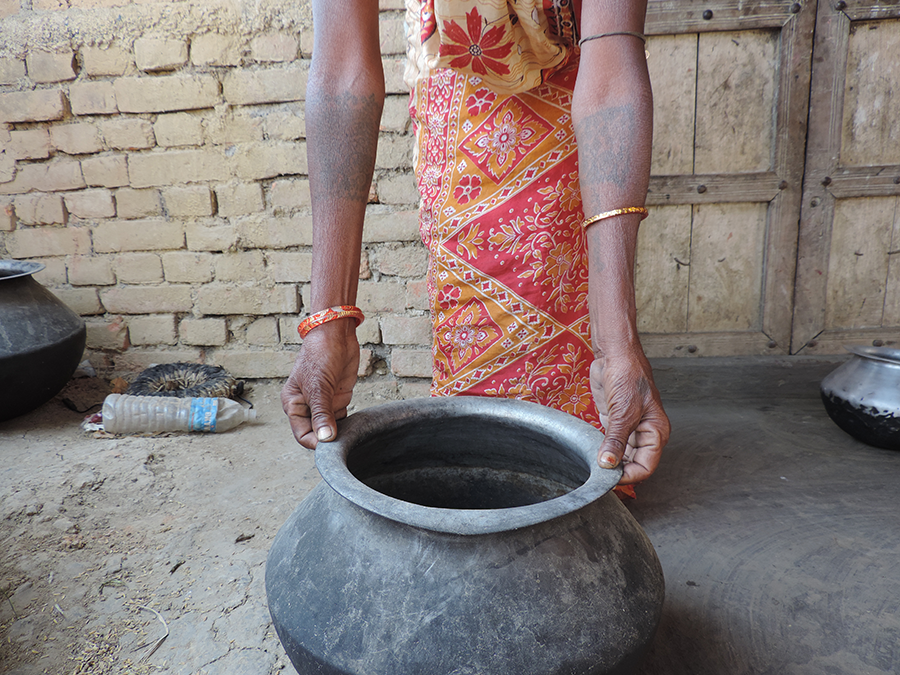 But this practice may have barbaric roots, according to accounts by village elders and social scientists. In many rural communities, women were in purdah, so their faces were not visible. Women from lower castes therefore had to have visible parts of their bodies tattooed to signal their inferior status. Men did not have to do this because they did not cover their faces and, in a village community, their castes were usually widely known. Over the years, the function of the godna changed. 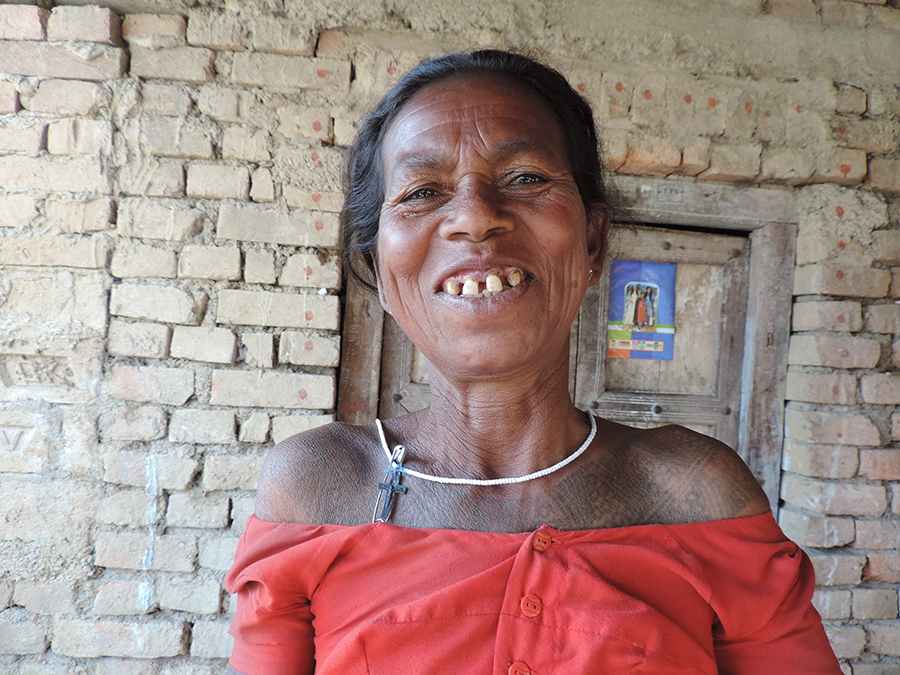 The Munda tribe in Jharkhand, which has a highly developed sense of valour, uses godna to record historic events. “The Mundas thrice defeated the mighty Mughals,” said Santosh Kiro, who teaches English in St Xavier’s College in Ranchi, over the phone. To commemorate the victories over the Mughals, Munda men even today inscribe three straight vertical lines on their foreheads. Kiro, who is a Santhal tribal, said the godna was in fact the chief means that many tribals used to record historical events. 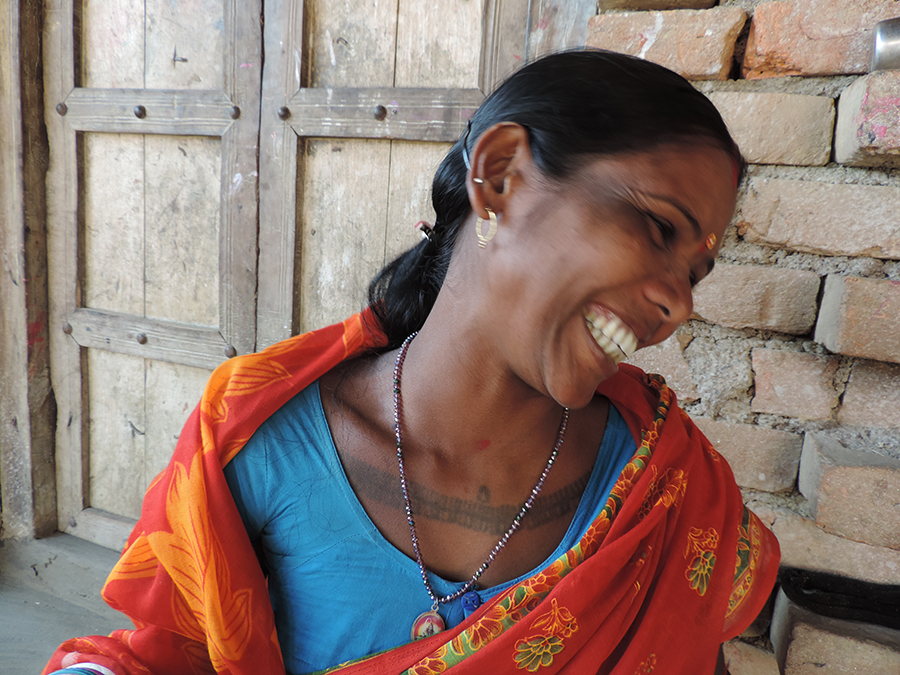 Santhals have different tattoos for each sex, for different parts of the body and for different life stages. Santhal men in Bengal and Jharkhand inscribe tattoos called sikkas on their forearms. The tattoos are named thus because they are usually the size of coins, sikka being the word for coin in Hindi and the Santhal dialect. Santhal men wear several of these tattoos along their wrist. The number of these tattoos is always odd, because odd numbers signify life and even ones symbolise death in Santhal cosmology. 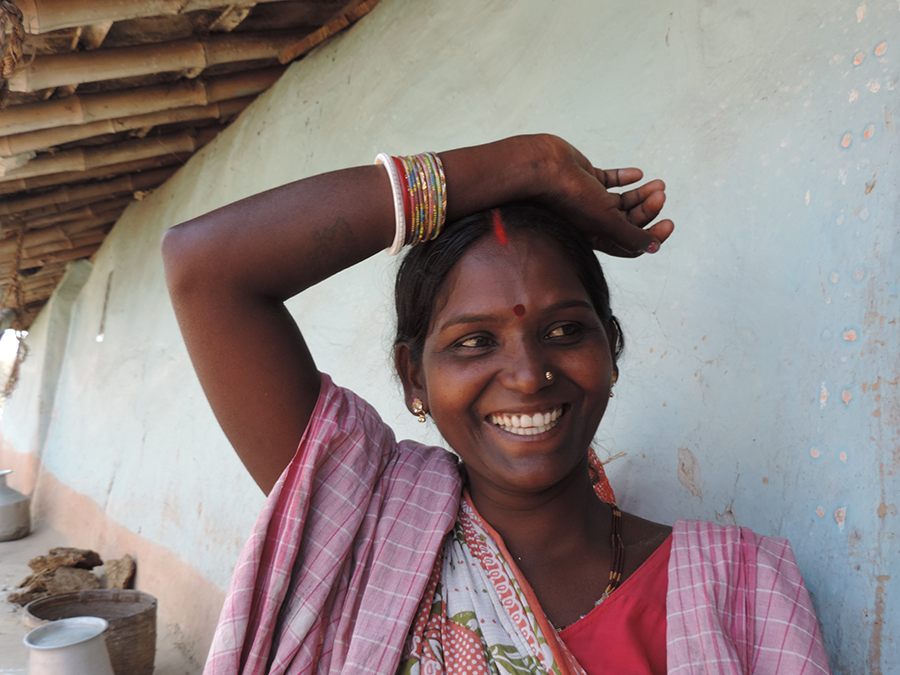 Santhals, as well as the Banjaras in Rajasthan, tattoo their women with floral patterns that are painstakingly inked on different parts of their bodies, including their faces. They acquire godnas over a period of 20 to 25 years. The chati godai, for instance, is a tattoo inscribed on a girl’s chest when she attains puberty and, if not then, when she gets married. 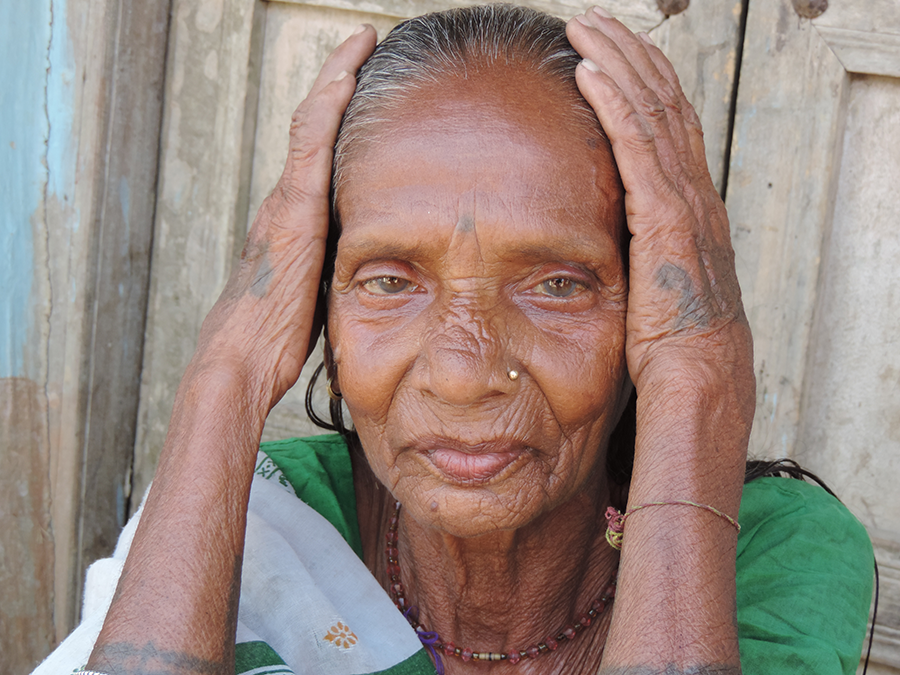 “I got chati godai done at my wedding. It was a very painful experience,” said Badki Besra, 40, a Santhal in Rajmahal in Sahebganj district in Jharkhand. “But they say that it prepares a girl for the pain of becoming a mother. It also gives her the strength to face all different challenges in life.” Besra, who also had a three-inch-thick inscription around her neck like jewellery, sees the godna as identifying her with her tribe. 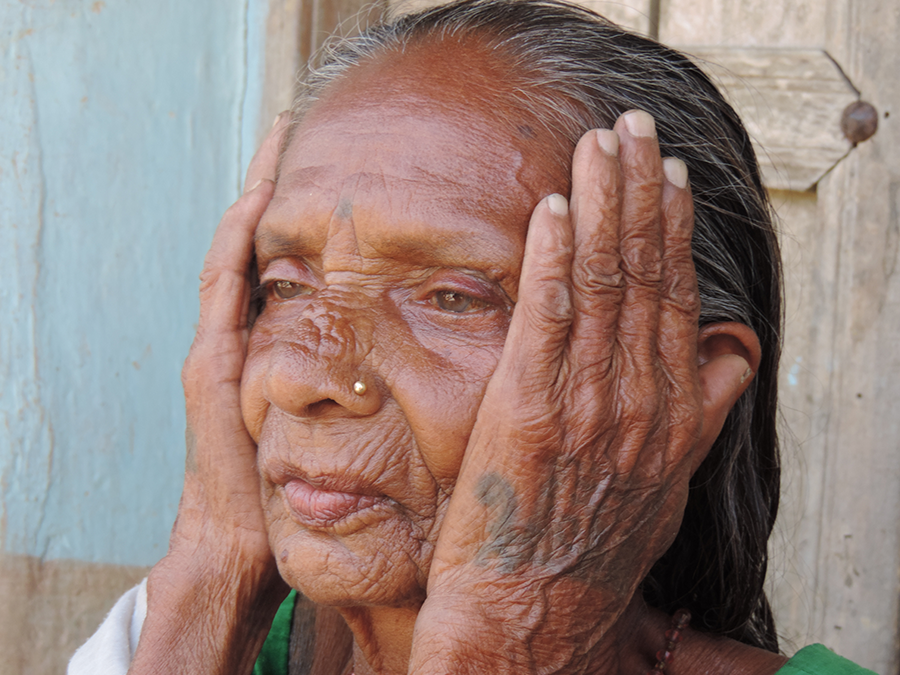 “The tattoo is the only jewellery that you always carry,” said Talamoni Hasdak, 70, another Santhal woman. “It is the only worldly object that goes with you when you die. People might snatch away your gold and worldly possessions, but no one can take this away.”

For needles, godna artistes in some communities use thorns, in others they use sticks of bamboo tied together. For ink, some communities use a mixture of cow bile, soot, plants and pig fat. Others use ink made from crushing and burning a variety of grape seed. A chati godai takes about a day to complete while a godna covering the face, called a black mask, can take up to three days to finish. 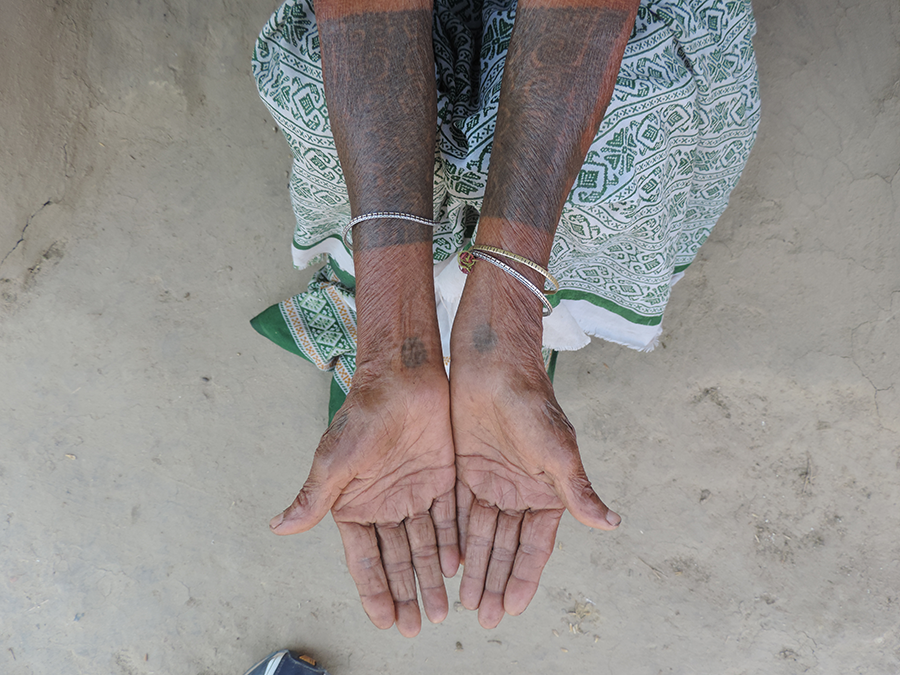 “After outlining the design, the inking starts,” explained godna artist Sameema Khatun, who belongs to the Julaha community in Jharkhand’s Sahebganj district. “We use 10 to 12 long needles to pierce the skin,” The Julaha, a Muslim caste, does not itself have a tradition of godna, but its members have been drawing designs for others for centuries.

Neeraj Hembrom, a Santhal from Jharkhand who is a Bharatiya Janata Party youth leader, worries about the declining popularity of godna among tribals over the past decade, a time when the demand for tattoos in urban India has risen. Many older tribals are proud of their godna traditions, but the younger generation, especially those who go to cities for higher education, feel it marks out their origins, which the unenlightened among their colleagues often label as backward. 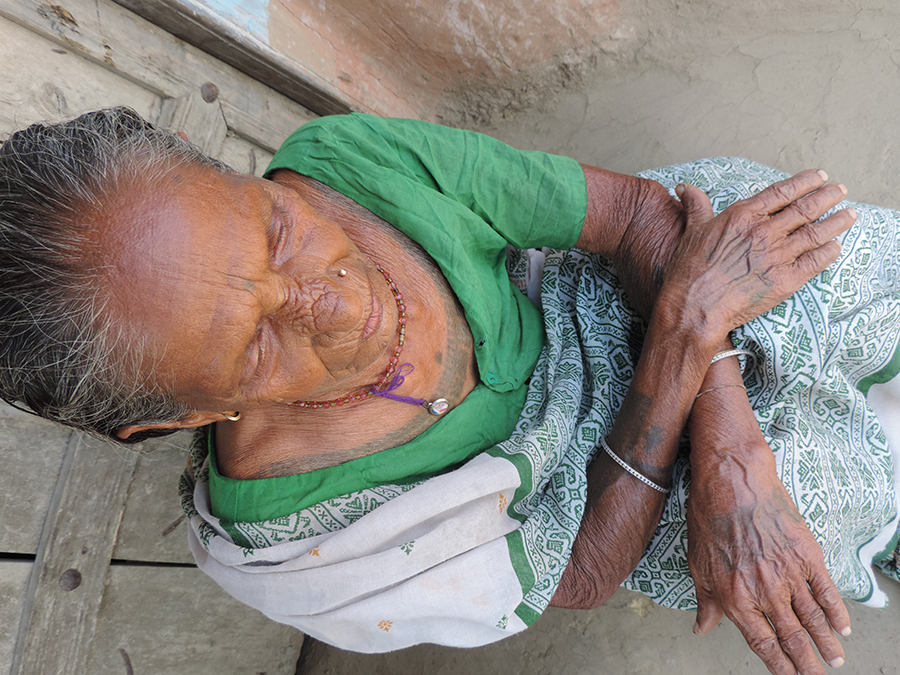 While tattoo artistes are making money, their godna counterparts struggle to keep their art alive. Inscribing a three-inch tattoo costs about Rs 1,500 but getting a godna of the same size would cost just around Rs 20. 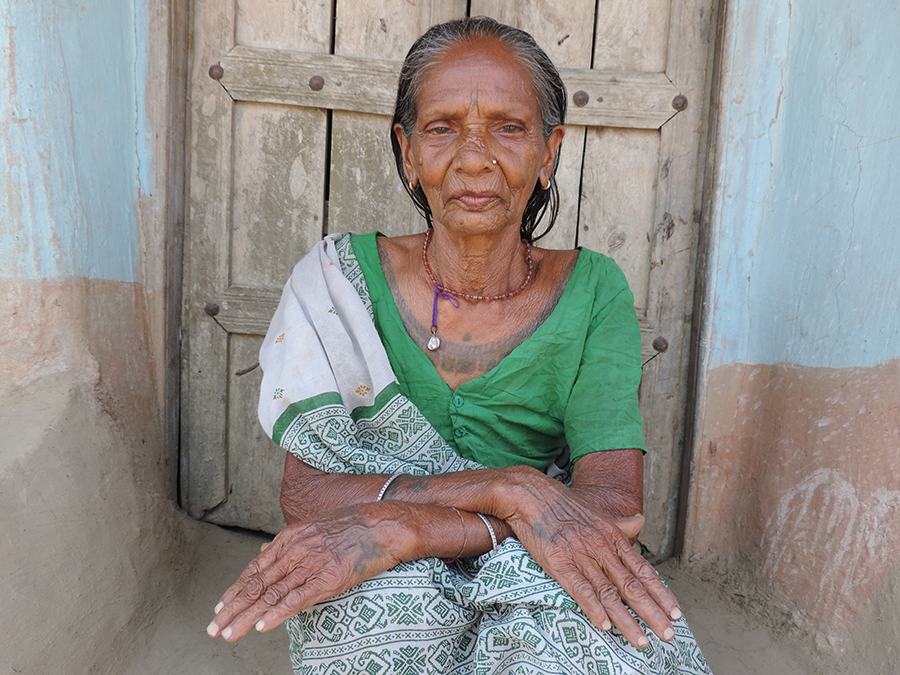 “We don’t do it for the money,” said Khatun. “It is a rich art form that our forefathers have been practising and preserving for centuries. It is our duty to carry on the tradition.” For most godna artists, their work has become just a part-time activity. 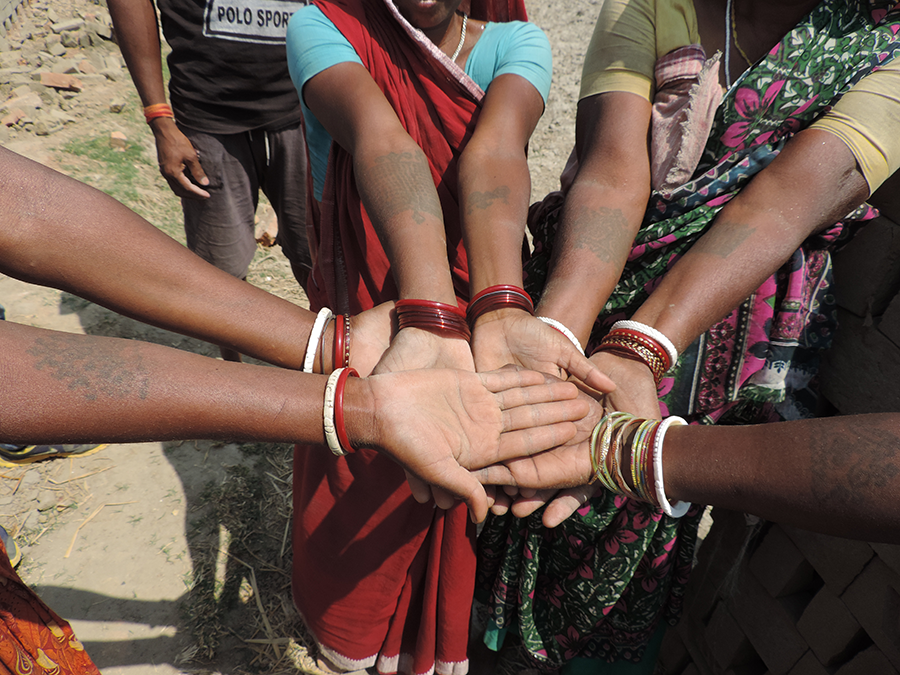 But some urban tattooists acknowledge the tribal roots of their art.  "The modern tattoo has been inspired by godna," said Nilay Das, who owns the popular studio Lizardskin Tattoos in Kolkata. "We need to save a fast-disappearing art form before it is too late.” 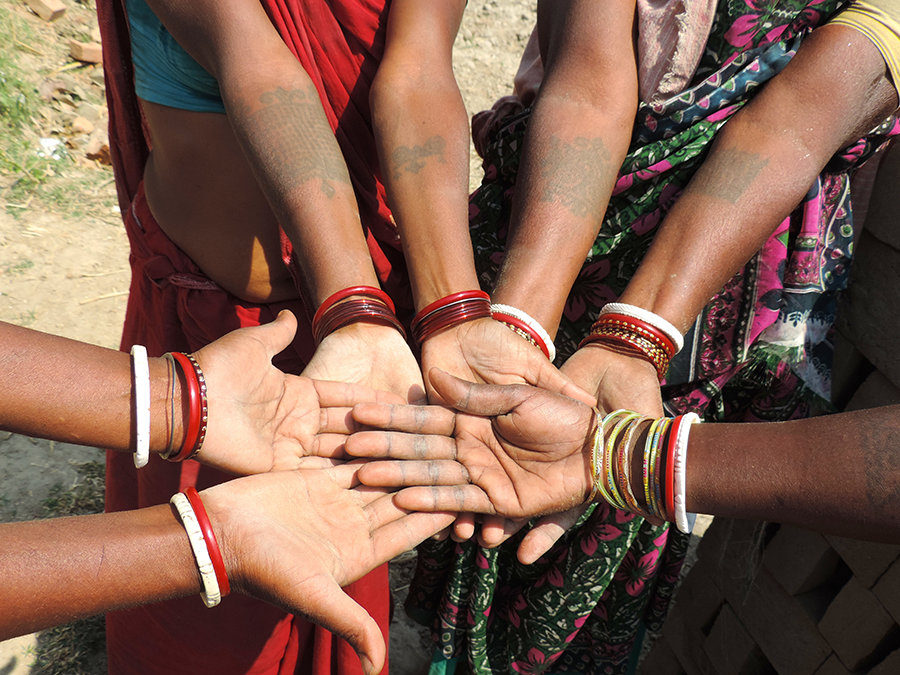