Contribute Now
Ad
In a move denounced by India’s health activists, the Central government on Tuesday deferred its decision mandating that pictorial health warnings cover 85% of all tobacco packaging. The postponement comes a day before the rule was to come into effect and a day after puzzling remarks by Dilip Gandhi, the head of the parliamentary panel examining provisions of the Cigarettes and Other Tobacco Products Act.

“All agree on the harmful effects of tobacco," PTI reported Gandhi as saying. "But there is no Indian survey report to prove that tobacco consumption leads to cancer. All the studies are done abroad. Cancer does not happen only because of tobacco.” The MP from Maharashtra expressed concern that 4 crore people in states like Madhya Pradesh, Andhra Pradesh, Maharashtra and Chhattisgarh are dependent on bidi-making and asked that research on the health effects of tobacco be done in the Indian context.

There is in fact a wealth of global research linking greater incidence of cancer with tobacco use and, as even Union minister Prakash Javadekar acknowledged, there is no dispute of that scientific fact. Gandhi is also wrong about there being no Indian research on the topic. All he had to do was check Google Scholar. Scroll.in conducted a simple search with the search terms “India tobacco cancer cigarette” and found studies documenting the carcinogenic effects of tobacco from as far back as 1970.

DJ Jussawalla and VA Deshpande of the Bombay Cancer Registry published a paper in 1970 to evaluate the effects of tobacco when chewed or smoked. The registry, established in 1963, had enough data by 1968 for a five-year retrospective study. After a detailed examination of tobacco chewers, smokers and those who both chewed and smoked tobacco, Jussawalla and Deshpande found “sufficient evidence available today to indict chewing and smoking of tobacco as factors of great importance in the etiology of oral, pharyngeal, laryngeal, and esophageal cancers”.

In 2000, doctors from the Gandhi Medical College in Bhopal found strong evidence that smoking bidis is more harmful than smoking cigarettes when it comes to lung and oropharyngeal cancer. They found that the risk percentage in a population exposed to bidi smoking to be 83% and that among those exposed to cigarette smoking to be 72%. Among those chewing tobacco, 66% were likely to develop oral cavity cancer. The doctors advised interventions to protect a population still reeling from the health effects of the Bhopal gas leak disaster in 1984.

A 1996 paper by the Tata Institute of Fundamental Research looked into the many ways that cancer is consumed in India – bidis, chutta, hookahs, clay pipes – and found strong epidemiological evidence that these tobacco products are linked to cancer. The study, led by public health expert Prakash C Gupta, identified several carcinogens in tobacco, which lent biological plausibility to the link with cancer.

In 2012, Gupta along with two researchers from the International Union Against Tuberculosis and Lung Disease published an analysis of deaths attributable to smoking in the last 100 years in India. The study published in the journal Current Science said that “nearly 4.52 trillion cigarettes and 40.3 trillion bidis have been produced between 1910 and 2010, which are estimated to be responsible for nearly 100 million premature deaths (in which bidis contributed 77 million deaths) in adult men of ≥35 years”.

This one chart tells the story. 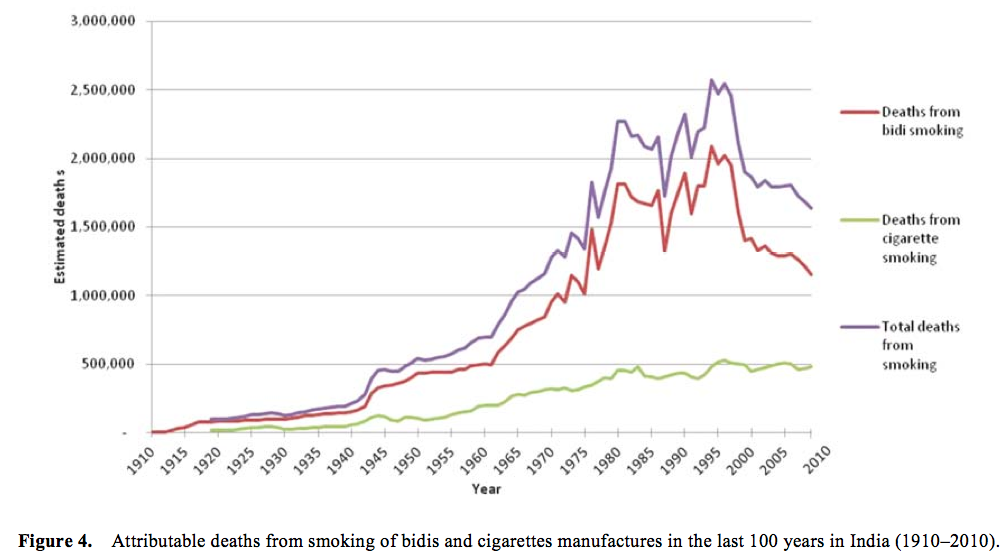 As for having larger pictorial warnings on cigarette packets, it is found to deter young people from smoking. Especially effective in places where literacy rates are low, they are psychologically proven to have better recall value than smaller pictures.

“Key challenge would be to fight off tobacco industry lobbying and bureaucratic hurdles,” wrote AIIMS doctor Yatan Pal Singh Balhara in a letter published in February in the journal Nicotine and Tobacco Research. “The decision to increase the size of pictorial warning on cigarette packages in India is a policy decision supported by scientific evidence. The next challenge will be to implement it in letter and spirit.”

Why the tobacco row isn't surprising: conflicts of interest have never bothered our Parliament