Contribute Subscribe
Until last week, the countryside in Nalgonda district in Telangana was a picture of summer languor. With the rains having been scanty last monsoon, the fields were fallow, farmers read newspapers at tea kiosks, motorists stopped at wayside shacks to sip chloral hydrate-spiked toddy and children stopped cars on the single-lane roads to demand Holi inaams.

But the police seemed to be nervous. On NH 163, which slips past the bald hills of Bhongir and Aler, there were barricades every 15 km or so. In the interior villages, vehicle registration papers were checked in some seriousness. This being peace time, it was all put down to the ongoing campaign against drunken driving.

The peace has been broken by the two so-called encounters that have taken place since the middle of last week between the police and alleged terrorists. Suddenly, Nalgonda has returned to the state of nerves that used to be palpable when Maoist guerrillas operated in the hills of this district 10 years ago.

The chain of events started at midnight on April 1, when two young men, now alleged to be operatives of the Students Islamic Movement of India, were pulled out of a Hyderabad-Vijayawada bus at Suryapet and ordered to submit to a police check. Instead they pulled out guns and shot two policemen, snatched a carbine from one of them and fled into the night.

Some 18 police teams were put in their pursuit over the next 72 hours, and after gunfights at three places, the outlaws were shot dead on April 4, aided in a good measure by some bare-knuckle bravado by unarmed constables. One more police officer involved in the operation died later in hospital, having never seen a son born to him in the same hospital just a couple of days ago.

As is the wont of policemen everywhere, the deaths of comrades stung the entire security establishment of Telangana and may have imparted an emotional charge to what ensued.

Two days after the Suryapet gunfight, on April 7, police shot dead five alleged terrorists who were being driven with an escort of 15 armed guards from the Warangal prison to a court in Hyderabad to face proceedings in a terror case. Among those killed was Viqaruddin Ahmed, a man of some notoriety who is said to have killed three policemen in Gujarat and Hyderabad in the years before his capture in 2010.

Police authorities said Viqaruddin asked for a toilet break as the bus passed Aler and lunged for a policeman’s rifle as he was being freed of his handcuffs. The other undertrials did likewise in unison, the police said, and were all shot dead by a machine-gun wielding guard in self-defence.

As police accounts of encounters go, this is a familiar narrative, especially for the Telangana police, of detainees turning upon their guards and being shot in retaliation. Coincidentally, this template was also used by the police of the residuary state of Andhra Pradesh to explain the killing of 20 woodcutters in the red sanders forests of Chittoor district on the same day.

Human rights groups are not buying the police explanation. The encounter took place in the same district, Nalgonda, some 80 km from where the alleged SIMI duo were taken down. Photographs of the bus encounter showed the five militants slumped in their seats, still handcuffed to the steel frame of the seating. The body of Viqaruddin lay against a window with a rifle cradled in his lap. 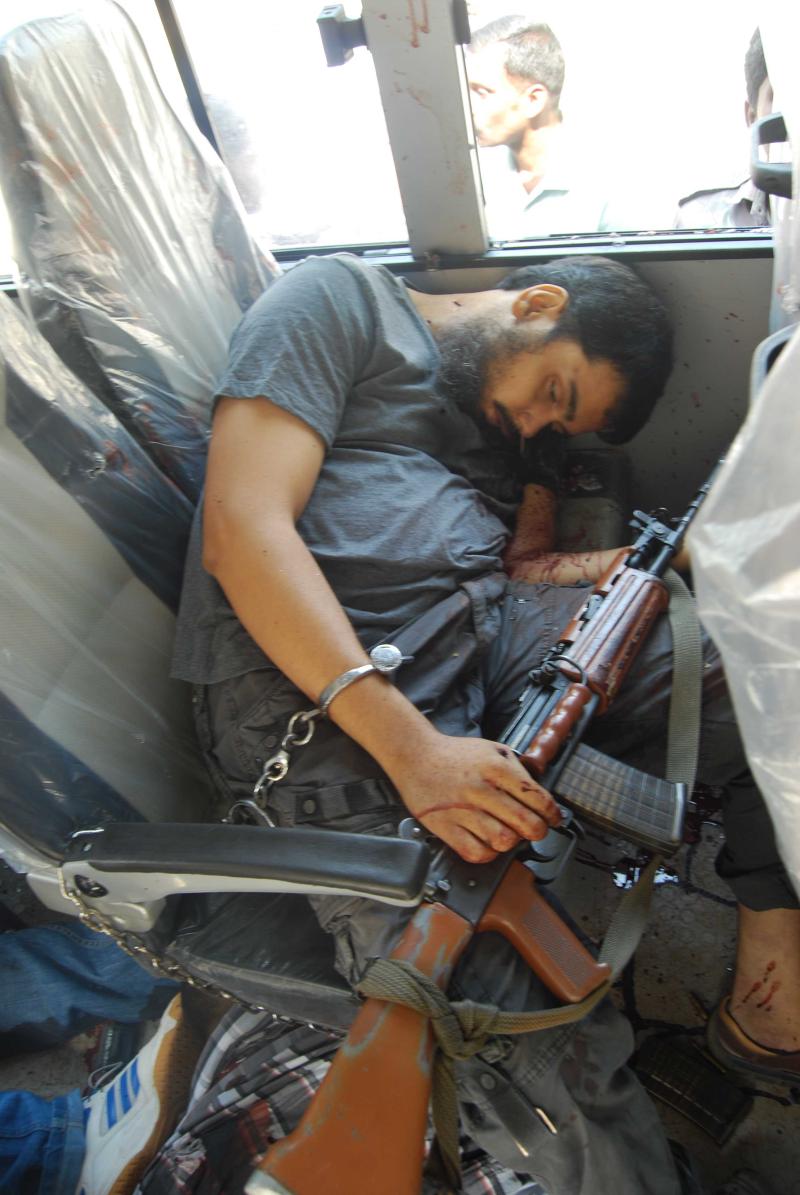 Rights groups also point to other mystifying recurrences from past encounters, such as the practice, or maybe merely a coincidence, of gunfights taking place in the very vicinity of previous events. In December 2008, three men were shot dead by policemen in an encounter at a hillock on the outskirts of Warangal. They had been accused of throwing acid on two young engineering students, Swapnalika and Pranitha, in a case that had elicited revulsion all across the state. After their capture, they were marched to the very place where they had disposed of their incriminating material. There, in the words of the then superintendent of police of Warangal district, "they attempted to flee by throwing acid at the policemen and tried to attack them with knives and a pistol. The police fired in self-defence and killed them."

What significance might there be in the happenstance of two encounters, one in which policemen are killed by audacious militants and another in which detainees are killed in what the police calls "self-defence",  taking place in the same geography? The Telangana police say there was no connection between the Suryapet gunfight and the Aler encounter, but rights groups say that the incident was meant as a warning to Muslims in Nalgonda district, which  has figured in the police map as a SIMI hub, and the police are still investigating whether the Suryapet fugitives were sheltered by a local dargah for two nights before they met their deaths. Alleged operatives from Nalgonda have been named as participants in terror activities ranging from the Haren Pandya murder in Gujarat and a terror blast at the Indian Institute of Science in Bangalore.

In the aftermath of the Suryapet-Aler engagements, what has so far not followed familiar encounter trajectories is the fact that rejection of the police version has been far more immediate and vehement than in the past. The police seems to have managed to get away with brazen impunity in the past, but hours after news of the Aler operation broke in the media, relatives of three of the five slain men said it was a cold-blooded reprisal for the Suryapet incident and an act in vengeance for the death of comrades.

These developments come in the context of efforts by the Hyderabad-based Majlis-e-Ittehadul Muslimeen which is seeking to expand the sphere of its influence far beyond the state and emerge as a pre-eminent voice for the Muslim community in the entire country.  Asaduddin Owaisi, the president of party minced no words in calling the encounter nothing but revenge killings.

The Telangana Rashtra Samithi government needs Muslim support to forge a broad coalition to build the new state of Telangana, and this gives the community greater traction than what it had in the undivided state.  Whether or not it would moderate the police remains to be seen, but with the latest "encounter" the police has definitely managed to lose all the goodwill and sympathy it had garnered after the Suryapet incident in which policemen were killed, leading up to the chase and finally the killing of the two alleged SIMI activists.

Maharashtra wants a happiness department. But what has the one in Madhya Pradesh achieved so far?