Apr 11, 2015 · 12:30 pm
Snigdha Poonam
In urban India’s new cultural hierarchy, the top rung is reserved for the global Indian: The foreign-educated, career-oriented, well-read, well-paid, well-travelled and socially savvy men and women who are held up by an increasingly aspirational society as the embodiment of success.

The deeper the idea of money not being able to buy everything sets in urban psyche, the bigger the rise in the social stock of people who had the foresight to cultivate “class”. They are the taste-makers and trendsetters, pursued by gourmet restaurants, adventure travel companies and peddlers of holistic living. The more you observe their rise, the more they seem to have everything going for them.

The reasons: They have too much work, too little time, saturated social circles, few outlets to meet new people like themselves, cultural baggage, and too many expectations.

Given their social prominence, it was only a matter of time before new-age entrepreneurs realised the market potential of helping India’s professional elite pair off. Over the past five years, a dozen gated singles’ networks have sprung up in the big cities – Delhi, Mumbai, Bangalore, Pune – to serve the social group they refer to as “cultured professionals”.

You could be a lawyer, a banker, an entrepreneur, a consultant, an architect, a pilot, a news anchor, a graphic designer, a TED fellow. It could be any job that broadly came under the purview of cool – engineers are mostly missing from the professions outlined – as long as you could pay anywhere between Rs 10,000 and Rs 50,000 as annual membership, excluding the considerable cost of attending mixers, and wouldn’t be out of place at a BBQ lunch or wine tasting.

At a masquerade ball hosted by A World Alike at an upmarket restaurant in Mehrauli where Sangria flowed like water, I looked around to see a curated set of Delhi’s professional elite, most of them in their 30s – a Supreme Court lawyer, a United Nations consultant, a television journalist, a publishing house editor – swish around the cobblestone courtyard, wine glasses in hands, sizing each other up on the basis of number of years spent abroad.

The way the networks describe their target client more or less makes up the definition of ‘class’ in contemporary India. A World Alike, a few-months-old invitation-only lifestyle network in Delhi only takes in “well-educated, articulate” individuals with “social, emotional and intellectual capital.” Multi-city singles’ network Floh marks out its clientele as “urban professionals who have graduated from top universities in India and across the world.”

Aisle, a closed online community of “urban, like-minded Indians,” makes clear that “if what comes to your mind when you hear “Guns N’ Roses” is guns or roses, then you might not be a good fit.” Footloose No More, a private match-making network in Mumbai also specifies who it’s not for. “We don’t want those people joining this group who don’t naturally belong here because we have our events at high-end clubs and venues… Your money alone does not entitle you to come to our events.” Hatkeshaadi.com, an online matrimony network, defines their ideal member as “well-educated, well-travelled…multi-dimensional in their personalities, with the right mix of modern and traditional values.”

For some of the people behind these networks, starting one was the only way to find companionship or love. A World Alike was set up by Himanshu Gupta, a 35-year-old investment banker who returned to India recently after being abroad for ten years, because he found it hard to meet interesting people to meet or date in Delhi. 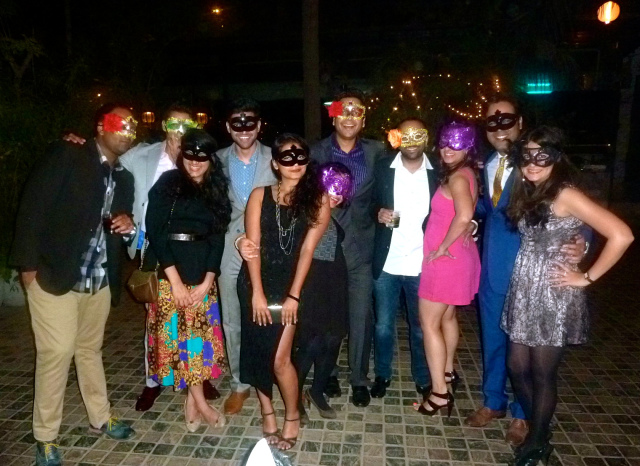 A masquerade ball hosted by a new lifestyle network in Delhi.(A World Alike)

It was after being single for several years that Varsha Agnihotri, aged 35 at the time and working as an ad filmmaker in Mumbai, founded FNM in 2010 in partnership with her brother Abhishek. “We were both single, had a large circle of friends, but rarely saw someone outside of it,” Agnihotri told me over a salad-and-sandwich lunch at an upscale restaurant in Vasant Kunj. “We made a page on Facebook and had a hundred members in just a month. It wasn’t hard to identify people we would take in. There were some obvious things in common – the way we dress, how we conduct ourselves, the food we eat.”

This, of course, is just the first step in a multi-level screening process employed by FNM and similar networks that are more stringent about keeping out those who don’t belong than taking in ones who do. You first fill a form with personal details, submit a set of documents, including government-approved identification, go through a personal or phone interview to convince the team that you are worth it, wait for a few weeks for your background to be verified, Facebook behaviour to be found normal, and for your referees to recommend you as a suitable addition to the network, and finally attend an event where the organisers can see you work your game and be sure of your place in the community.

“I don’t wish to sound like a snob, but some girls might not want to end with a guy from Delhi 6, who can easily hire someone to ghostwrite his profile on a matrimonial website,” said Agnihotri in between drags on a cigarette. The networks are targeting singles who have had no option a few years ago but to fall back on family connections (what Agnihotri calls “the auntie network”) or submit to the tediousness of matrimonial websites.

The Agnihotri siblings are now married to people they met at their own mixers, Abhishek with “a convent-educated MBA graduate working in a large organisation,” and Varsha with a man who quit his corporate job to become a music composer. “We have 3,000 members now in four cities. We have seen 52 marriages in five years,” Agnihotri said.

The mixers thrown by these networks, whether a cook-out or a painting workshop, need the members to perform, from putting on their best clothes to turning a conversation into an opportunity, and the pressure is often more on men than on women. “For some of the men, no one’s ever taught them how to woo a woman, to ask someone out. One of the things we tell the girls who join the network is to be kind to the men,” said Agnihotri.

Shruti Sharma, a 31-year-old digital media consultant with an international non-profit, joined Floh in 2013 because she didn’t seem to meet the kind of the men she likes in Delhi. She told me over an email that she found the men at Floh to be “more on the shy side” than women. Nevertheless, attending the events has restored her faith “in the fact that there are some wonderful people out there – I just haven’t met my wonderful person yet.”

The men have a different perspective on the matter. A 28-year-old lawyer with the Supreme Court who attended A World Alike’s masquerade ball, told me later over the phone that the reason men were hesitant to make the first move in social settings such a bar was because they felt “a lack of invitation.” Things could have been more open on a platform such as the popular dating app Tinder, but in his experience, “girls use it as a game to express whether they like your looks or not, and not as it should be used. Ninety nine percent of my male friends have been unsuccessful on Tinder.” It was hard, he said, for someone relatively new to Delhi such as himself to “find people on a similar wavelength” and exclusive singles’ networks could be a way to bridge the gap.

“I think the wonderful set of people sitting in that room, irrespective of sex, all just want the same thing,” said Shruti Sharma about an event at Floh at which men and women shared their experiences and expectations of love. “What I took away from it was that we’re all alike: Scared of being vulnerable, spoilt by choice, affected by our drastically changing social scenarios.”