Contribute Now
Ad
The grass is always greener on the other side of the fence. And so it remains for those who like the security of a regular job on one side, and those who like the freedom of working for themselves on the other. From the outside, it indeed seems like a lucrative proposition to be able to choose one’s work and working hours and even negotiate better payment for new projects.  With increasing internet usage, the concept seems to be catching up in India as well.

According to a recently released survey, conducted across the world with over 20,000 respondents, on an average, Indian freelancers work more than the global average but end up earning $2 less per hour as compared to the world average.

Despite these statistics, the report, published by Payoneer, a payments services provider based in New York, reveals many interesting insights which point towards the fact that barring a few persisting inequalities when it comes to women freelancers and pay scales, Indian freelancing might finally be coming of age.

The survey collected close to 2,000 responses from Indian freelancers and concluded that on average, Indians work on their freelance projects for 37 hours per week. This is straight one hour a week more than the global average. This implies that Indian freelancers may be devoting some 50 hours extra to their projects over a year. 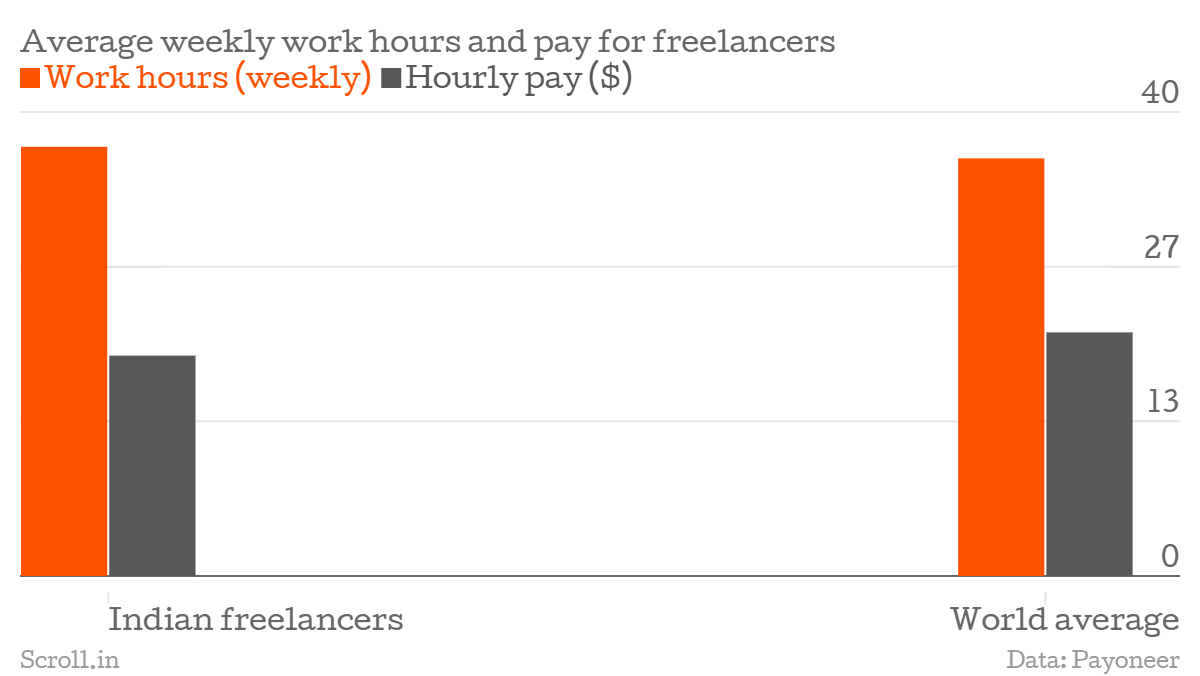 However, their dedication often doesn't translate into commensurate pay as Indians earn an hourly rate of $19 while the world average is $21 for freelance work.

A crucial point that was revealed in the survey report is the apparent gender imbalance in the Indian freelancer population. Almost three out of every four respondents were male freelancers, suggesting that freelancing may not be as popular among women yet.

Only 22% or a little over one-fifth of Indian freelancers are women, as per the study. This could be because of the limited reach or the peculiarities of the sample size of the study but the issue of women representation in workforce, as evidenced by the fact that it took a directive from the government regulator to ensure that at least one woman would be included in the board of each corporate, seems to be reflected here as well.

These women, however, are paid even less than their male counterparts in India and only make about $17 per hour on average.

Putting in the hours

When it comes to putting in long hours, Indians are among the most hard working across the world, with different professions accounting for large variations. For instance, those in sales and marketing domain worked 41.7 hours per week on average while those in writing and translation only clocked 31.6 hours per week. Similarly, those in legal services worked much more than those in design and multimedia.

Even though Indian freelancers put in more work than their counterparts, they were markedly less satisfied with their income. The worldwide level of income satisfaction is 46% but in India it drops to 36%. There seems to be a direct correlation between hours of work and income satisfaction as those in sales and marketing reported a high level of satisfaction while those in writing and translating were the least satisfied.