Become a Member
Ad
If there’s one thing that’s certain about the general election in Myanmar later this year, it is this: history will either be made or unmade.

An uncomfortable pessimism fills the air as the nation counts down to the time when the Aung San Suu Kyi-led National Democratic Front will take on the military mandarins of Yangon. It has been five years since the Nobel-winning human rights crusader Suu Kyi was released from political detention and four years since the former military general Thein Sein was sworn in as the eighth president of a country that has witnessed brutal military rule in various forms from the 1960s.

But despite the passage of this time, the promise of democracy appears fraught.

How can Myanmar transition to democracy with a constitution that reserves 25% of the seats in Parliament for military appointees? How can the election reflect the popular vote when the constitution effectively bars Suu Kyi from presidency by disallowing from the post anyone whose spouse or children are foreign citizens (her late husband Michael Aris was British)? And what about the multiple ethnic fractures in the Myanmar mosaic?

Beneath the veneer of trust, cooperation and confidence being built by the current regime, there’s a groundswell of dissatisfaction. Ethnic violence has seldom been as protracted and insidious in any other Southeast Asian country as they have been here.

Before the nation confronts these schisms and decides who gathers finally in the halls of Naypidaw, let’s look back into the annals of history to a time when one could hear the paddles of the British army, as Rudyard Kipling wrote, “chunkin’ from Rangoon to Mandalay”.

The road to Mandalay

After the second Anglo-Burmese War in 1852, Rangoon was one of the first major cities to be seized by the British. It subsequently became the frontispiece of the British economic sculpting in the region and the stepping stone for colonial incursions into the Upper Irrawaddy tracts, leading ultimately to the capture of Mandalay – the capital of the Konbaung Kingdom.

The unceremonious ouster of King Thibaw, the last ruler of Mandalay, marked the end of the kingdom of Burma. Thant Myint-U, a popular Burmese writer who has lived much of his life in the West, described these last moments with memorable sparseness in The River of Lost Footsteps:

“There was no ceremonial procession. Instead, Thibaw and his young family, together with a train of servants, were led towards a few ordinary bullock carts…large crowds of ordinary people had gathered along the avenues leading from the walled city…as their king passed them by, men, women, and children instinctively knelt on the ground…with his attendants holding a tall white umbrella over his head, and a crush of English, Burmese and Indian onlookers all around, the twenty-eight year old Thibaw walked onto the ship, never to see Mandalay or Burma again.”

In the wake of Thibaw’s ouster and the fall of the kingdom, the foundations for a new Burma were laid. Sir Randolph Churchill (father of Winston Churchill), then secretary of state for India, formally abolished Burma’s ancient monarchy, marching on the famed Road to Mandalay and taking the city for the British crown in 1886 (Mandalay was then renamed Fort Dufferin). From then on, Burma was governed as a distant province of India, in many ways a marginal territorial appendage, till a wave of nationalist student leaders (among whom was the famous Aung San) rose in the 1930s and led the country to its eventual but ephemeral independence in 1948.

In the interim, Burma turned into a cosmopolitan mosaic, with immigrant populations dispersing across the land, often at the expense of the indigenous ethnic minorities. The British, unleashing a series of economic overhauls and rail constructions, settled populations from many parts of India especially in Lower Burma (Rangoon). This influx ballooned further the existing immigrant numbers consisting of trading communities from the middle-eastern littorals of the Indian Ocean, colonial officials and sections of Chinese peoples.

Despite all the change the colonialists heralded, the irony was that Burma and especially British Burma hardly featured in the British imagination the way India, Australia or Africa did, wrote Thant Myint-U in the Telegraph. And nowhere are the subtleties of this irony more visible than in the visual archive of colonial Burma.

Watts and Skeens, and DA Ahuja

Sifting through the myriad, priceless photographs in the Pitt Rivers Museum archive at the University of Oxford, my attention fell on a series of 200 postcards dating to the late 19th and early 20th century. The album was a motley collection of images donated to the museum in 1986 by the Burma-born artist and illustrator Noel F Singer, whose personal collection included “enough duplicates to make up an album consisting of an interesting assortment of subjects such as architecture, costumes, religious art and ethnic groups”.

The postcards were all printed between 1895 and 1934, and bear the indelible imprint of a colonial archive. In them one frequently encounters the jejune “Burmese Villager”, “Burman Band”, “Burman Tribals” “A Village Scene”, even the highly staged “Burmese belle”. 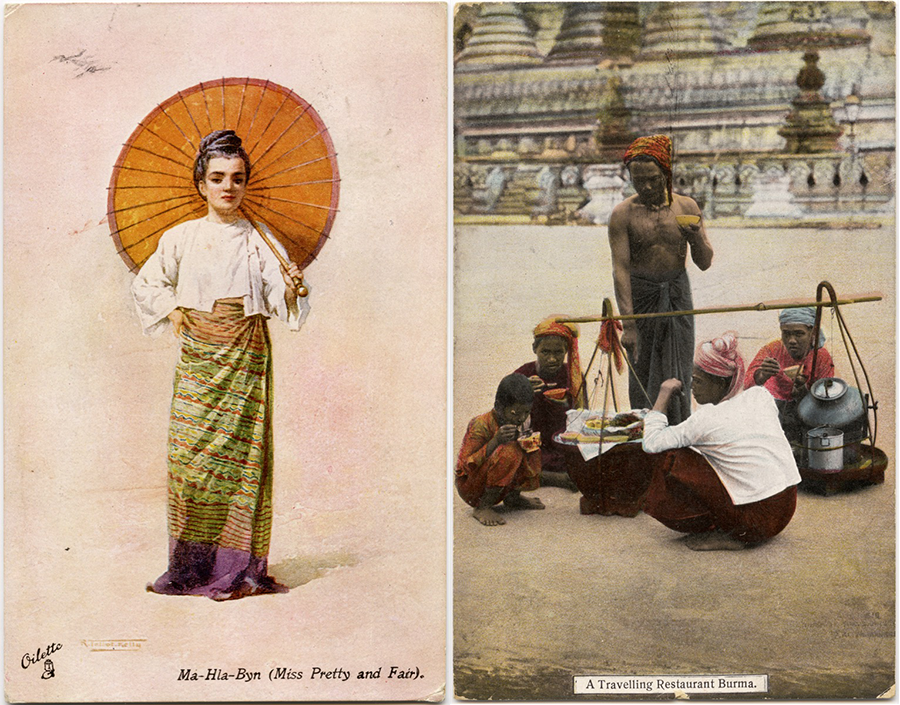 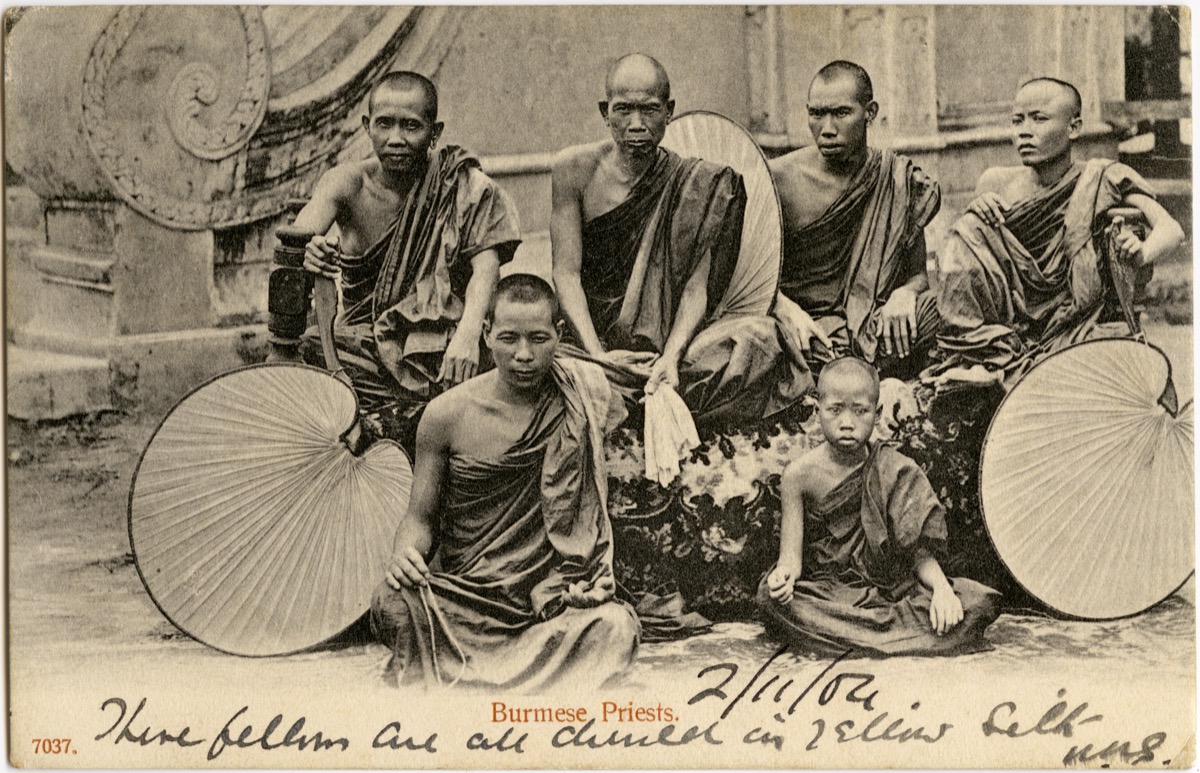 Most interestingly, I found that the greatest proportion of postcards were originally printed in Germany and bore the name and copyright of an Indian, one “D.A. Ahuja”. Further research revealed that Ahuja was among the largest suppliers of Burmese postcards in the early 20th century. Whether Ahuja was a photographer himself is disputed but it is known that he published a manual in Burmese whose English title reads Photography in Burmese for Amateurs. He most likely started off as a small-time photographic dealer in Rangoon, and by 1912 he had become the proprietor of the English firm Watts and Skeens, reproducing many of their photographs under his own name.

Ahuja’s studio stood for about half a century till its ultimate seizure and closure under the military general Ne Win in 1962. It is likely that Ahuja employed technicians of both Indian and Burmese origin and relied on his Indian-derived commercial networks to distribute technical equipment and prints. These prints began as a relatively unknown, local tradition and gradually acquired the attention of both the public and the panoptic colonial eye. By the mid-20th century, Ahuja had risen to a preeminent position in Burma, enough to be included in the famous Thacker’s Indian Directory (1901).

In the museum’s collection of images, many were printed by DA Ahuja. But there were other printers too, including SPG Missionary Postcards; Rowe & Co Ltd, Rangoon; Myles Standish & Co, Rangoon; The Phototype Company, Bombay; Raphael Tuck & Sons. What struck me about Ahuja’s prints were their portrayals of the stability, harmony and geniality of colonial Burma. One need not be trained to note that many Burmas unfold at once in the collection. Yet there is a visual neatness to them all, a sublime quality that tends to take one away from the underlying social schisms, the distinct fault lines developing under colonial rule. 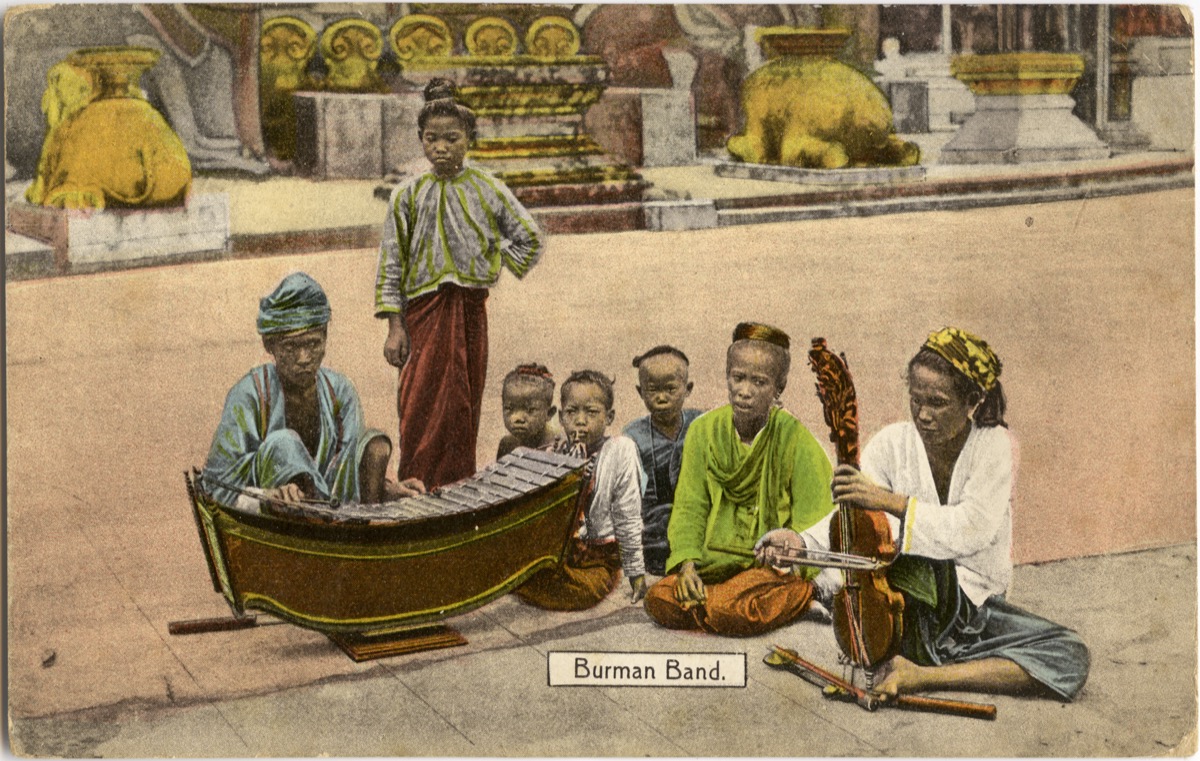 The differences, for sure, were there. For instance, one can survey the visual tenor in which the two preeminent cities of the period – Rangoon and Mandalay – were depicted in the prints, and see the clear distinctions between the sacred, sparsely inhabited landscapes of Mandalay shrines juxtaposed with the equally sparse, albeit aerial, landscapes of Rangoon.

Imposing colonial arcades, Roman Catholic churches, American Baptist churches, Chinese shrines, mosques, government homes, fruit bazaar are the unmistakable landmarks in Rangoon. In contrast, Mandalay, one gets the feeling, is yet very much an imperial and spiritual ghetto – its pagodas, palace halls, royal gardens and shrines unmarked by the colonial motif. 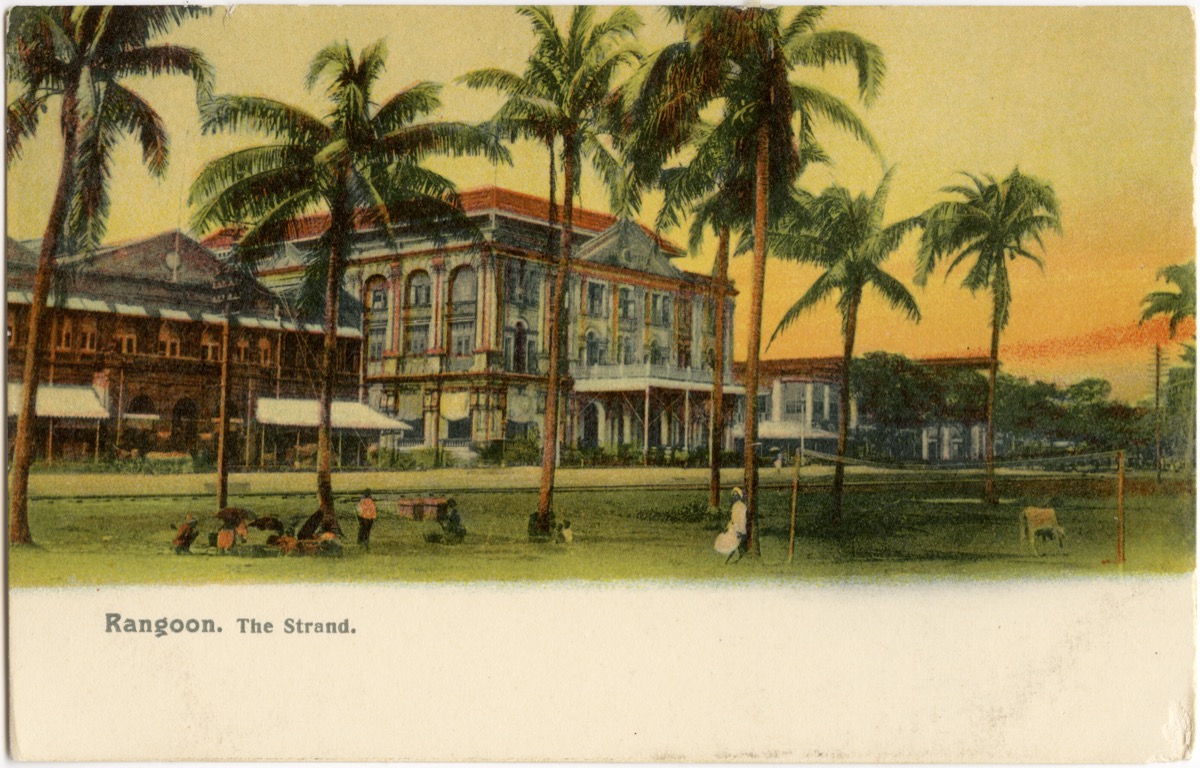 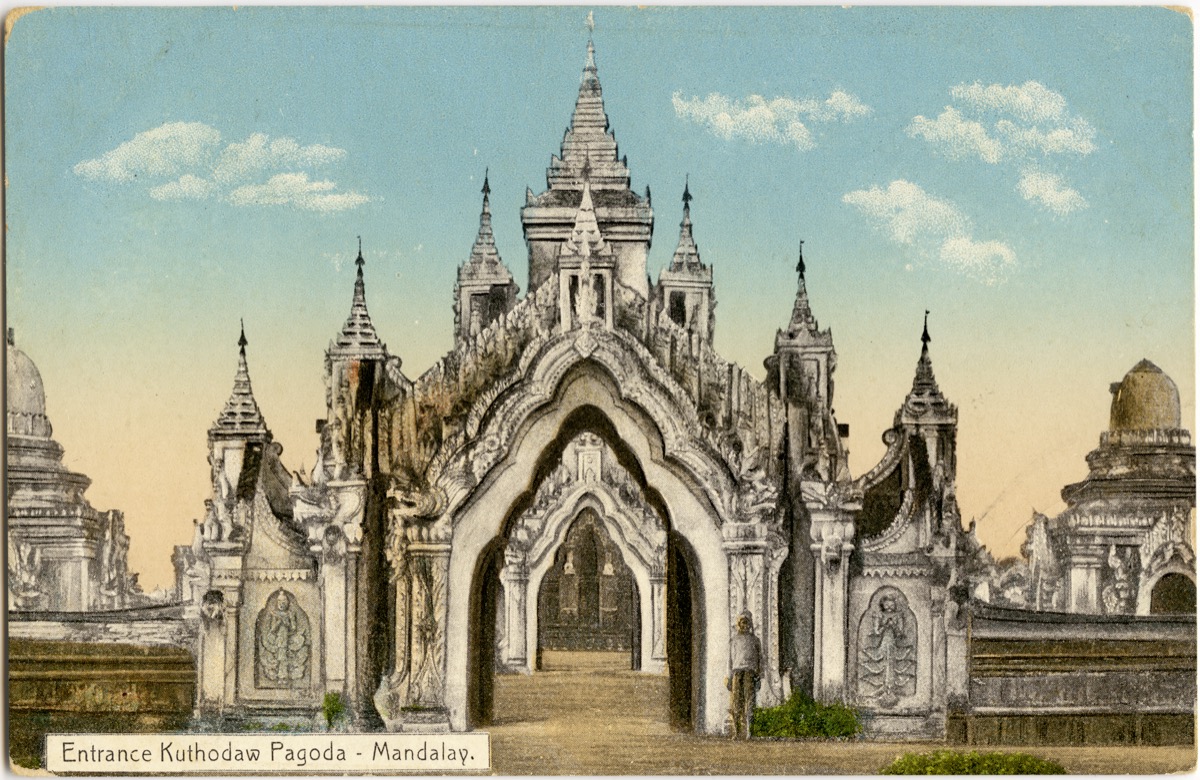 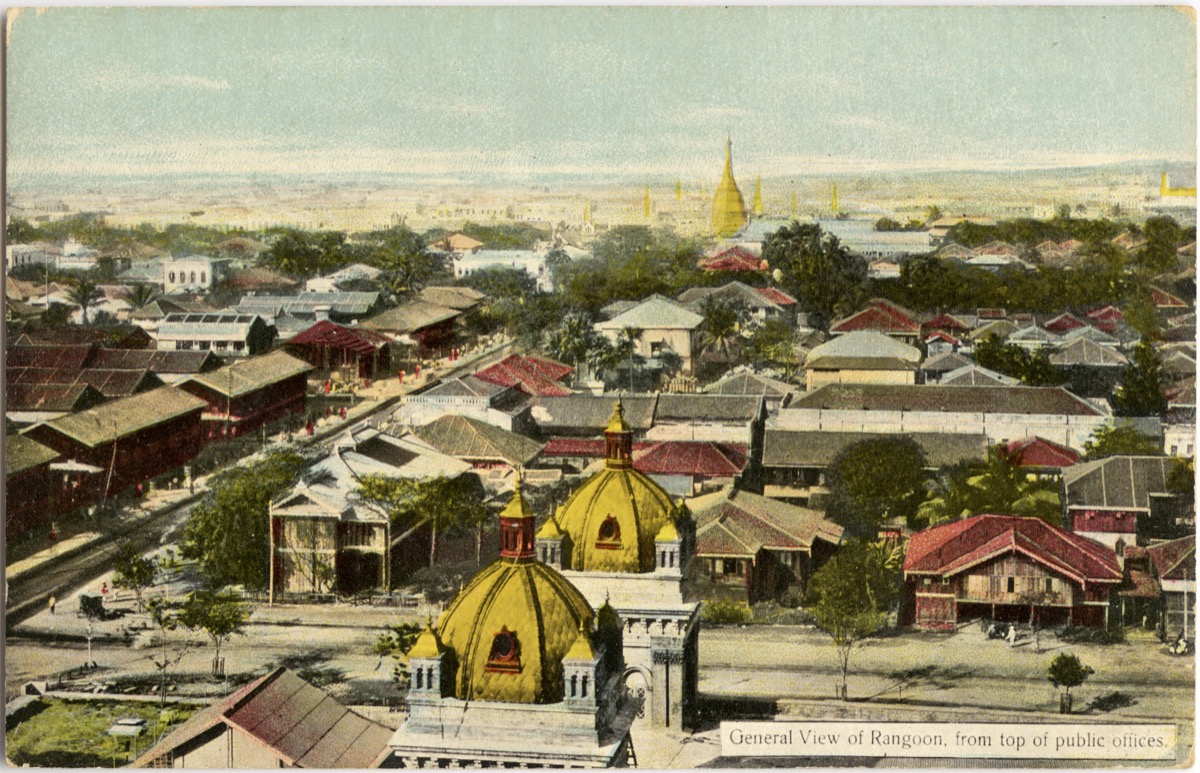 ‘General View of Rangoon from top of public office’ 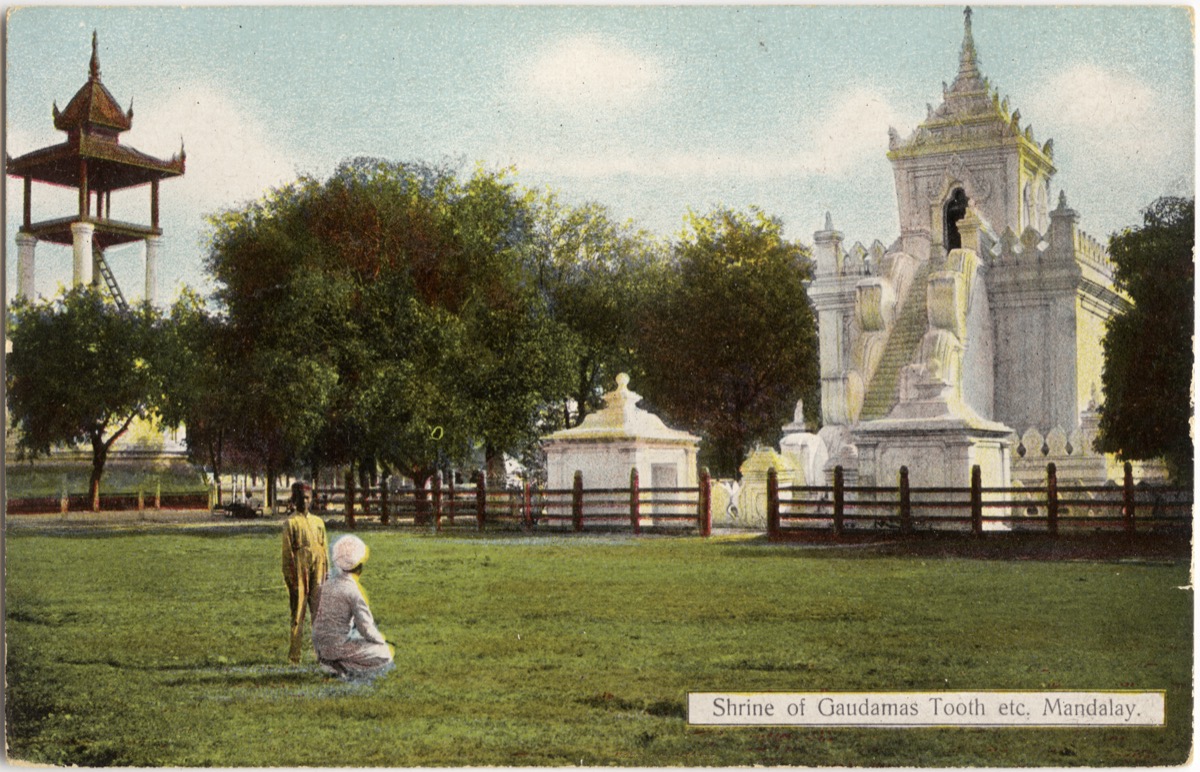 The colonial Rangoon still lives up to its cosmopolitan reputation – Strand Road, Dalhousie Road, Phayre Street, Bombay Road, Mogul Street are living locations even today. But the shrines depicted in the Mandalay prints are long gone, demolished by the British.

There is yet another intriguing level at which the visual disjuncture plays out between the two cities. The only shrine depicted ornately in the Rangoon prints is the famous Shwe Dagon temple (known for a hair relic of the Buddha and its famed gold vihara). Here one is brought to the ground, sometimes to the very feet of the Buddha, sometimes to the sanctum sanctorum, to the ornate niches and carvings of the gold pillars and wooded doorjambs. In the Mandalay prints, shrine, palace and lake are close but never intimate. One is never taken to the interior of their sanctums.

In what is otherwise an unwitting attempt to produce a popular visual harmony in representations of Burma and its peoples, the two great cities stand apart subtly but significantly. 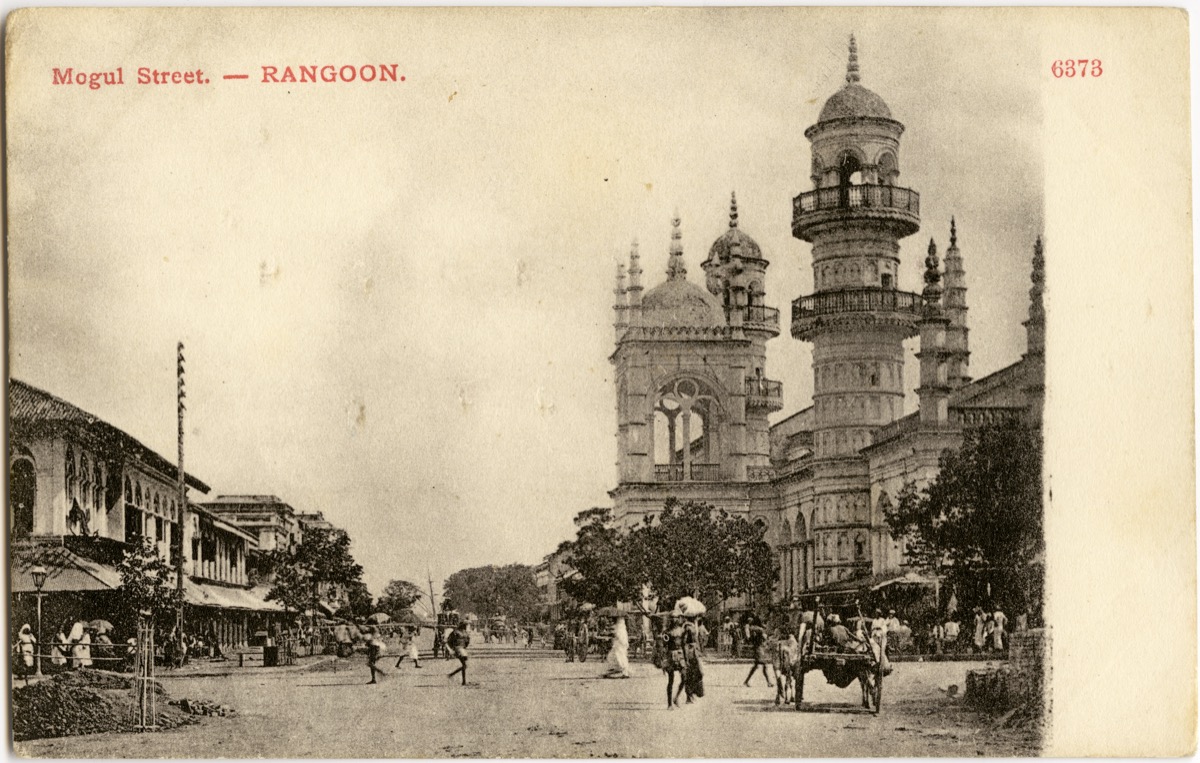 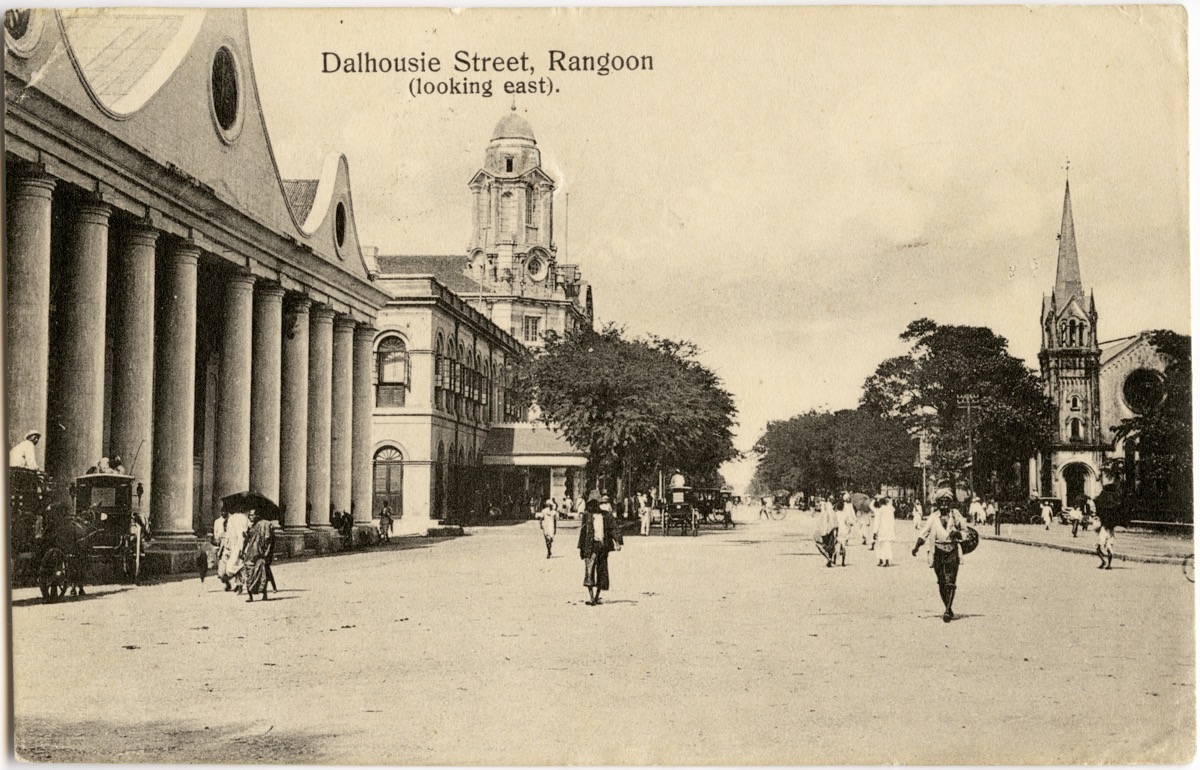 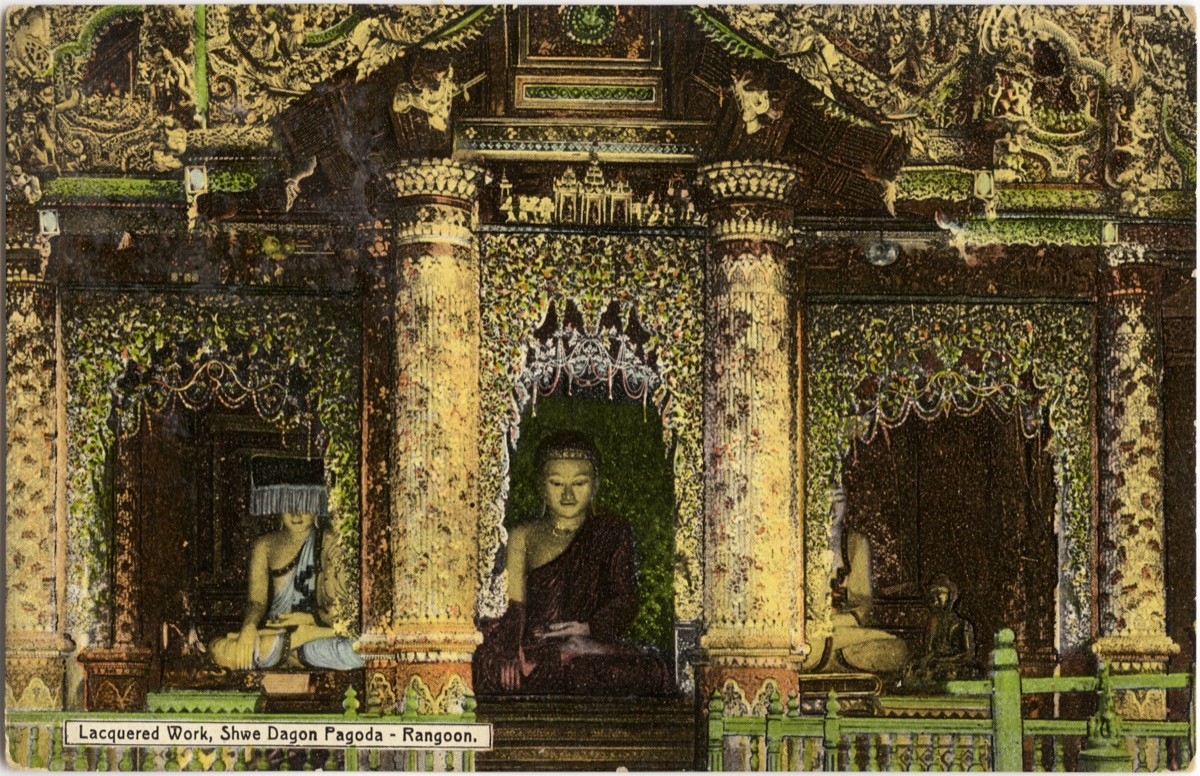 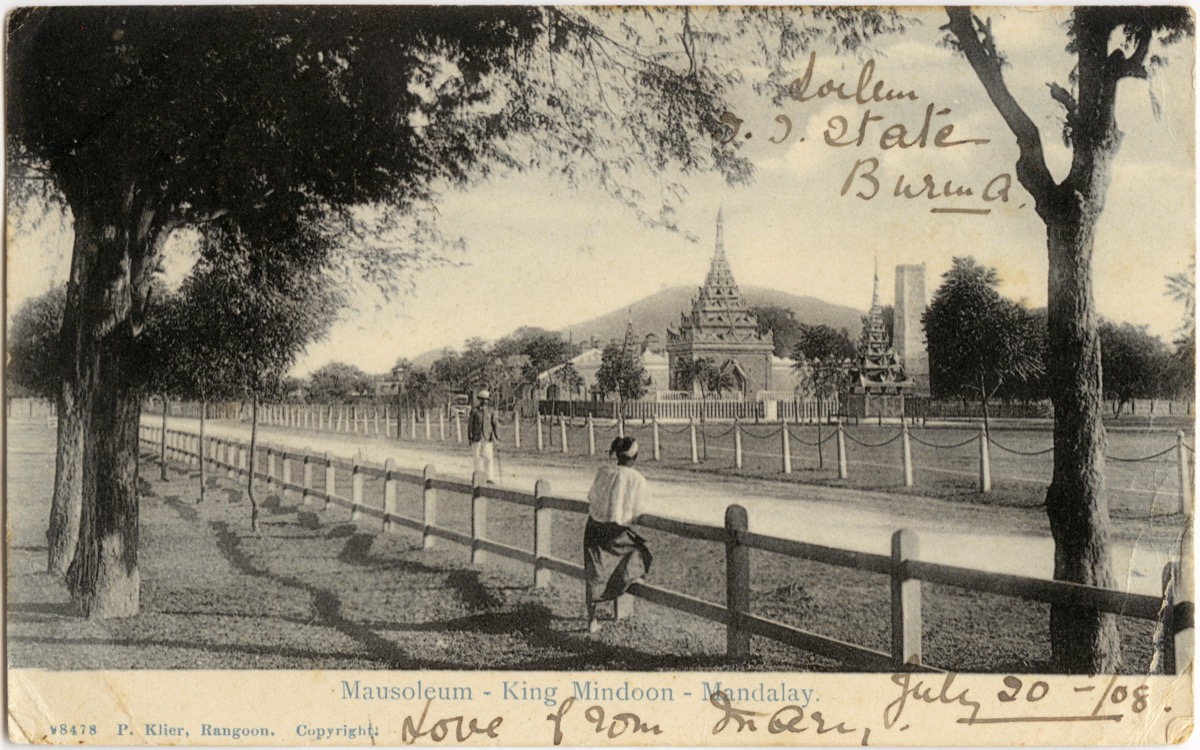 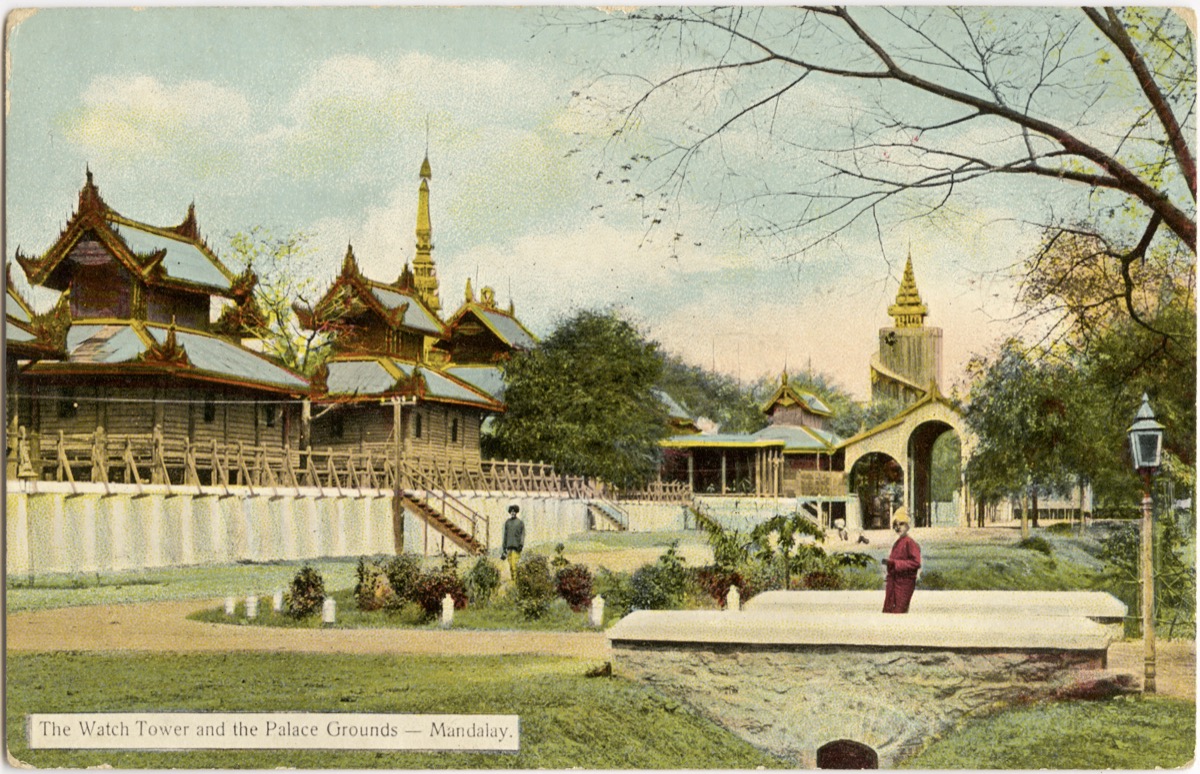 ‘The Watch Tower and the Palace Grounds - Mandalay’

It is most ironic that the fulcrum of political power in Burma has now shifted to the modern Naypidaw (which means “royal city of the sun” in Burmese), located somewhere between Rangoon and Mandalay. The highways, malls and arcades of the capital – meant for a largely expatriate population and a handful of military mandarins and parliamentarians – form together a highly incongruous landscape, especially in the eyes of the ethnic groups living in the frontier zones. Theirs is a Burma very different from both the modern capital and the colonial postcards.

See the first part of this series on postcards from Burma here.

The writer wishes to thank Mr Philip Grover, Assistant Curator, Photograph and Manuscript Collections, Pitt Rivers Museum, University of Oxford, for all his support and advice.

Historical photos of the Kaʿba and the Hajj season