Contribute Now
Ad
Eating with your hands is a strict no-no, a taboo in polite western society, while hands are the utensils of choice in some parts of the world including South Asia. However, when it comes to eating out, even Indians who happily eat with their hands at home seem to lose the desire.

Why do so many Indians hide this guilty secret? Why is there shame attached to this natural act? Is it perhaps a lasting legacy of the British Raj – a side-order of racism, of inferiority? What does it say about accepting our cultural ethos? And why do Indians abroad eat even a roti with fork and knife in the so-called civilised western world just to fit in?

Reporter Arun Venugopal, the quirky messiah of Micropolis, a programme on public radio station WNYC in New York, recently turned his knife and fork – or lack thereof – to this spicy issue in his series on race and culture. Over a hundred people from New York’s elite knife-and-fork brigade came together for an evening at Greene Space in Manhattan, becoming Hands-in-Mouth Warriors. With their bare hands they devoured an entire Indian meal served on banana leaves – Chicken Kottumali, Aloo Mustard Curry, Eggplant Chennai Roast and Basmati rice.

Venugopal’s foodie panellists for the $40 dinner and discussion included Jeff Orlick, an authority on food in Queens; Helen Hollyman, editor-in-chief of the website Munchies; rapper Himanshu Suri (aka Heems), whose new album is Eat Pray Thug; and Madhur Jaffrey, a noted authority on Indian food. With this diverse, colourful bunch, the evening not only revealed titbits about race, colour and culture but also examined diasporic life in a virtual grain of rice. 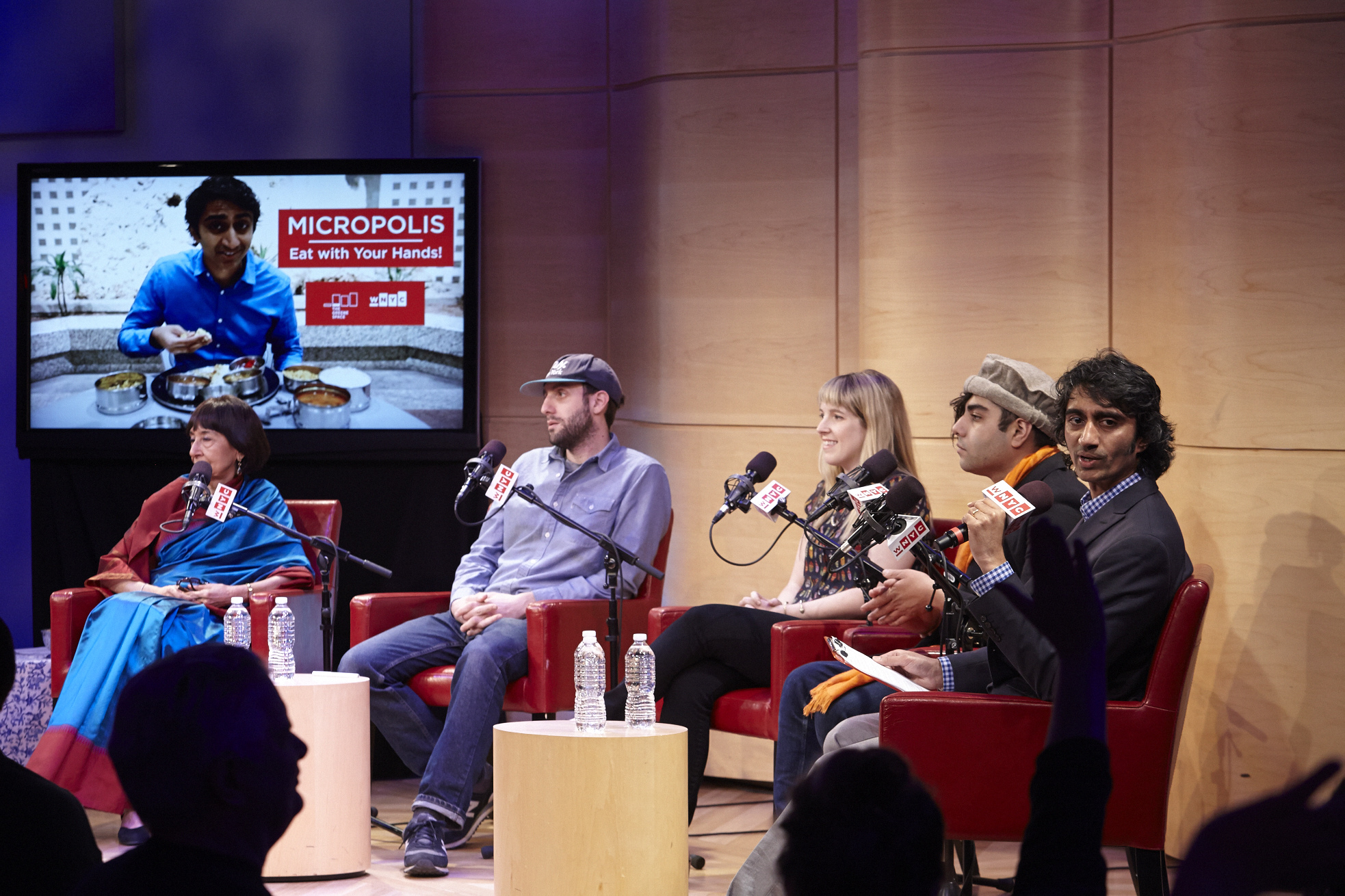 As toddlers, all of us have eaten spontaneously with our hands and one has to wonder why so many of us have forgotten this essential art? Eating with hands is a kind of intimate poetry with fingers and hands and tongue, a delightful squishing of food and sculpting morsels into our mouths – something which is just not done in many societies.

So this roomful of savvy New Yorkers put their cutlery down and pondered over some culinary questions. Does food taste better when it has been stroked and lovingly massaged by your fingers? Is there an art to this lost tradition? And why those who insist on knife and fork losing out big time?

Growing up desi in the white world has its own challenges. Venugopal remembered that as a child in Houston, Texas, he would never take his mother’s home-cooked meals to school. Nor did he want to bring friends home for a meal because they would then learn his dark secret – his family ate with their hands.

Punjabi-American rapper Heems, who grew up in Queens, has other memories – of packed lunches of bhindi, paneer bhujia and roti transported to school in Tupperware, and the jibes of school kids, “You smell like curry!” Yet, as he pointed out, as you get older, you get more comfortable with yourself and your hyphenated identity, and suddenly the things you were awkward with as a child, you want to hold on to in the Diaspora.

While the evening had many brown folk happy to reclaim their past, Venugopal joked, there were lots of anxious white people trying out the alien ritual.

Helen Hollyman, being from Texas, was used to eating with hands when it came to barbecued food. Moreover, as the worldly editor of Munchies, a site that celebrates weird ways of eating, she has seen her share of oddities and is comfortable with varied cuisines.

Jeff Orlick too was familiar with the all-hands concept, coming as he does from the Immigrant Capital of Queens which has New York’s largest Little India. As he said, “It depends on how wet it is! I’ve eaten tacos and bagels with my hands – but as far as Indian food is concerned – it is a bit of a leap for me to apply my hands to the issue!”

Legacy of the Raj

It was, however, left to Madhur Jaffrey, who grew up during the British Raj, to explain the deeper implications of the split personality left in Indians by colonialism. To eat with the hands or not to?

She explained that it begins at birth. In her family, the custom was for the grandmother to come with a jar of honey and dip the little finger into the baby’s mouth, writing Om with honey on the tongue. “It’s a first finger going in to the mouth and it’s a very, very sensual taste but also the finger of a loved one,” she said. “There’s something so intense about it, so loving about it that that love and sensuality stays within you forever. This is where you belong, this is your world – and it’s a lovely sensual world. My grandmother did it, my mother did it and I’m doing it.”

Eating with hands was regarded as routine, even when Jaffrey went to England as a teenager. “I was very comfortable in my skin and nothing was going to change me.”

The Raj co-existed with homegrown Indian culture, and Jaffrey recalled that though they always ate Indian food with their hands at their home in Delhi, they often ate “English food” with knife and fork. Indeed, certain concessions were made by even the British – curry and rice was eaten with fork and spoon, and even today Indians use these rather than a knife. Also, many Indian foods are just not meant to be eaten with cutlery. A textbook example is the Bengali fish with its many fine bones – fingers can do the detective work and discover the smallest of bones.

Heems recalled travelling to India on holiday with his family and eating at the five-star Bukhara – with their hands. His mother joked that they charged them thousands yet couldn’t even give them a knife and fork. The combined legacies of the Raj and the Diaspora had complicated things: he remembered his mother looking at all the wealthy people eating with their hands in the posh five-star surroundings and saying, “There are so many of these people here!” And he responded, “Mom, you are one of those people!”

“The Raj had this bunch of western people coming and telling us how to eat with these things – and one thinks, we had a good thing going before you came.” said Heems. “In the Diaspora we grow up with more shame while it’s very normal to eat with your hands in India. Here we wonder, do I eat with my hands? Do I smell like curry?”

Jaffrey recalled a Korean acquaintance who went to India and couldn’t bear to eat with her hands because she found it disgusting and dirty. Jaffrey asked her, “When you make love, would you make love with these tiny chopsticks? You are making love to all the contents of your plate – and eating them with that kind of pleasure.” Turning to Heems, she proclaimed, “Never allow anyone to tell you that you smell like curry. It’s a wonderful smell!”

Venugopal described Indian mothers feeding their children as the helicopter parenting of our country. As they run behind their offspring, forming balls of food to put into their mouth, perhaps certain oils are transmitted from the mother’s hand to the food, creating a wonderful alchemy. He marvelled: “There is nothing that feels as good as that.”

To which Jaffrey responded, “There is an emotional alchemy – you read about it in Ayurveda – in the process of cutting and cooking the food, you are passing the love directly into the thali of the loved one. You can’t beat that – you can’t expect your child to go to McDonald’s and eat a burger and get the same results.”

Indeed, eating with the hands is very emotional and has some primal connections. A 25-year-old Bengali-American in the audience confessed: “When I go to mom’s house I always ask her to feed me with her hands because I miss her. It’s the same curry but nothing tastes better!”

Eating with the hands has an added advantage – each bite tastes different, depending whether you mix the cauliflower sabzi with red or green chutney, pickle, dal, rice or yogurt. As Venugopal said, the idea of the evening was to reclaim the colonial dining room, undoing centuries of gastronomic hegemony. And South Indian delicacies from chef Hemant Mathur’s restaurant Kokum Indian Cuisine, eaten lovingly with the hands, certainly was a start in the right direction.

So what did the evening tell us about ourselves?

A roomful of mostly strangers had done that most intimate of things – eaten with their hands and licked their fingers too. There was a certain bonhomie which probably would not have occurred at a regular dinner with silverware. Cell phone numbers had been exchanged and life stories swapped before the evening was done.

So was there any shame in eating with one’s hands? Not at this venue. Everyone brandished wiped-clean banana leaf plates almost as a badge of honour. On my table there was only one leaf which was almost untouched and that was discreetly turned over, trying to fade into itself.

At the end of the meal, delicate bowls of water were provided for washing hands to the VIPs, and packaged wipes to the commoners. We cleaned our hands and nonchalantly popped them back into our pockets. Now if only we had a juicy, slurpy paan or a pinwheel of sticky orange jalebi to end this all-hands meal. Heaven!

Lavina Melwani is a New York-based journalist who writes for several international publications. She blogs at Lassi with Lavina and tweets @lavinamelwani.