Contribute Subscribe
Ad
I emailed Sabeen Mahmud on a whim four years ago, when I was 20, to ask if she were willing to organise a talk by me at T2F (originally called The Second Floor), the venue that she ran in Karachi. She asked me to come by. It was the first time I visited the new T2F venue. The walls had Einstein quotes, pictures of Steve Jobs (her idol), leftist posters (there was one with a traffic sign that said “always keep left”) and framed photographs. There were old issues of the New Yorker and Tehelka lying carelessly on a table. We chatted in a meeting room that had a large, round cable spool for a table. I wasn’t sure where my head was when I met her. I was seriously questioning myself about why I was there, why a college second-year with the one internship under his belt felt entitled to that busy corner where people like Intizar Hussain, Mohammad Hanif and Zehra Nigah had talked about literature, politics, and poetry.

I wasn’t to worry. Five minutes in, Sabeen was leaning forward, her eyes open, her hands resting on the table. She made me feel comfortable, and more than a little special. While her decision to go ahead with the event was made within the first five minutes, she spoke for an hour because she wanted to hear the talk before anybody else. She had me do it twice; she filmed it; she put it online; she got me an internship in Delhi; she introduced me to my dearest friends and colleagues.

As special as I felt, I wasn’t unique. T2F catered to talks on philosophy and capitalism as much as it did to underground rock bands, amateur stand-up comics, struggling filmmakers, rookie politicians, high-school science projects, old books and their old authors. Sabeen gave a lifeline to the kind of public activity that was endangered all over the country, but was on the brink of extinction in Karachi.

I was always thought of T2F as a shelter from the violent, ugly realities outside, but it’s a paradoxical thought, because Sabeen made sure no armed guards ever stood in the doorway. She never saw the distinction between inside and out. “Public spaces should not carry the fear of violence,” she used to say, even though that fear was never actually vanquished. T2F was robbed in broad daylight on a day it was hosting an art sale, (ironically called Lootmaar, a coincidence that even she laughed about when we spoke of it a few months ago. She had received death threats after she pushed back against Islamist attempts to strangle St Valentine’s Day. As the rest of the country lurched rightward, I found it more and more bizarre that hosting some gangly teenagers playing music not only became political statements, they became acts of defiance.

Sabeen embraced it. She confronted politicians, imams, colleagues, drivers, guards, everybody. She frequented the Karachi Press Club, where protesters would bring all sorts of grievances. She began social campaigns. After the Peshawar school massacre in December, Sabeen was a part of the #ReclaimYourMosque movement, which did the unthinkable when it managed to collect hundreds of protesters outside the Lal Masjid, the abode of a radical cleric who had refused to condemn the attacks. In January, she asked me to come by and help out with an anti-hate speech campaign she was organising. A bunch of us sat around that the same spool in the meeting room again trying to label all the different categories that could count as hate speech.

But she also had time for the little things. She found and saved some postcards of Karachi for me when I needed some to send to friends abroad. She’d spend time gossiping about the people we knew and complain about the grants she wasn’t getting; she’d ask about my mother; talk at length about Apple, Tim Cook and how Steve would have done things differently. If she were alive, she would have reprimanded me for considering these discussions a “little thing”.

Most of the things she did could be considered little. T2F was frequently criticised for being elitist, out of tune with the rest of the country, irrelevant. If that were the case, she wouldn’t be dead. Hosting a talk on Friday on Pakistan’s dirty war in Balochistan, where thousands of people have been “disappeared”, was the last thing she did. She hosted it with typical nonchalance.  She was shot dead by unidentified men on her way home.

The day before she was murdered, she posted a picture on Facebook of a Banksy mural showing mother tending to a mohawked man holding an anarchist flag. The caption read, “Don’t forget to eat your lunch and make some trouble.” To me, she was both the mother and the anarchist. She gave other troublemakers the courage to keep at it, and she made trouble herself, enough trouble to be murdered for.

Like with the death in 2012 of the legendary Dawn columnist Ardeshir Cowasjee before her, Sabeen Mahmud leaves Karachi bereft, uncertain, and without a voice. A generation of aspiring intellectuals, comics, artists, musicians, activists, writers, students and regular citizens are asking themselves where they will go now. 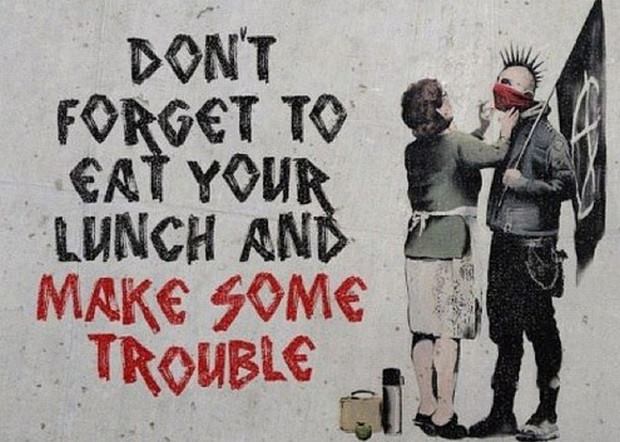 Oliver Mtukudzi dies at 66: What Zimbabwe’s man with the talking guitar tried to teach through song