Must we write about you in the past tense?

I'm trying to remember when we first met: Karachi, in the late 1980s after I returned from college. Ammi’s friend Zaheer Kidvai who I had a rapport with introduced us. He refused to be called “uncle”. He was always just Zaheer (later Zak) – not just for me, but also for you, ten years my junior.

Zak, the maverick former merchant navy techie brought new ideas about education and technology to Karachi. He introduced Apple computers to Pakistan and took you under his wing. He saw your potential and roped you in to his zany, maverick world. You and Zak: my two die-hard coffee-loving Mac junkie friends – Zak is Zackintosh in some social media accounts.

On Saturday, his own frail health notwithstanding, he attended your funeral, the funeral of his adopted daughter. Zak’s wife Nuzhat, a fiery activist herself, has been solidly by your mother’s side in hospital as they operate to get the bullets out. A single mother with an only child. It was too late before they even got you to the hospital.

The funeral, appropriately enough, left not from your house but the place you made a home for yourself and so many others: The Second Floor, community space, coffee shop, bookstore and art gallery.

How many initiatives have we been together in since the 1990: Peace Action Karachi, People’s Resistance, Citizens for Democracy, Citizens for Free and Responsible Media, to name some. You were on the board of Madanjeet Singh’s South Asia Foundation, and among the Young Leaders network of Asia Society. I remember our excitement when South Asia Foundation invited us to Srinagar – and then the letdown when we didn’t get the visas in time.

I had fun filming my Kashmir documentary Milne Do at T2F’s old premises, with Asim’s mural on the wall: you, Basharat Peer, Saad Haroon.

There was that amazing Social Media Summit you organised in Karachi a couple of years ago, for which you flew in Indian participants. Uncomfortable with being in the limelight, you pushed me into introducing the first session and the last-minute concluding press conference with interior minister Rehman Malik. How it amused you were when people assumed I had organised it. You never wanted the limelight or to take credit – a rare quality especially in an age where everyone wants to be a star.

News about Sabeen Mahmud being shot dead hit like a bolt from the blue on Friday. Friends around the world, particularly in our home city Karachi, are shell-shocked.

“How many will they kill?” asks one person after another. Many cry uncontrollably.

I call Jibran Nasir, the lawyer-activist who is in the US addressing campuses and communities around the country. Sabeen was his mentor and friend, and one of the founders of Pakistan For All with him. They had formed human chains around churches after the bomb blast at a church in Peshawar in 2012 and were fighting for an inclusive, democratic Pakistan.

Jibran was in the middle of a presentation at Columbia University in New York when texts started coming in about Sabeen. Although shocked and grief-struck, he is resolute about taking forward Sabeen’s legacy of speaking out. He plans to start all his upcoming talks with Sabeen so “Pakistanis in America can see what a gem we lost”.

Some hours later, I speak to Zak – by then it’s early morning in Pakistan. He’s just come home from the morgue and the hospital. “I haven’t cried yet,” he says. Or slept, obviously. He's been dealing with all the formalities, including police reports.

According to some reports, the police are trying to pass the attack off as a robbery attempt. No one’s buying that. Five bullets – in the chest, neck and face – the last one going through and hitting Sabeen’s mother Mahenaz, who was hit with other bullets too.

She’s numb too, says Zak. She’s been operated upon, and all but one bullet removed which they couldn’t find. She knew that Sabeen was no more when she called out to Sabeen and took her hand after the bullets hit.

They were in their car at a signal from where Zak and his wife Nuzhat had just turned left, going ahead for dinner somewhere. “We’d barely reached the next signal when Mahenaz called saying, ‘Come back, we’ve been shot,’” says Zak.

Two clean-shaven young men on a motorbike had pulled up and fired at Sabeen, who was driving, her mother next to her, the driver at the back.

Driver at the back? Why?

“Sabeen se koi kaun poochta kyun,” says Zaheer. I can hear the smile in his voice. “She did what she wanted.”

Mercifully, Sabeen died instantly. As she slumped over, they fired another shot into her back. Then they took off.

Passers-by helped get Sabeen into the back seat. The driver took them to the nearest hospital. Zak and Nuzhat reached a minute later. Nuzhat took Mahenaz to the Agha Khan hospital across town. Zak stayed with Sabeen, pronounced dead on arrival.

They had been on their way back from a well-attended event on Balochistan at the arts-café-community centre The Second Floor – a project of Sabeen’s non-profit Peaceniche started in partnership with Zak. The idea was “to promote democratic discourse and conflict resolution through intellectual and cultural engagement”.

T2F has over the years become a hub for the arts, “a community space for open dialogue” with a coffeehouse, bookshop, an exhibition gallery and a staff that adored Sabeen. It didn’t matter what religion they were or how young or old. Though straight-talking and direct, refusing to suffer fools, she treated everyone with the respect and courtesy, especially those at a social or economic disadvantage.

How many writers have had their first readings or launched books at T2F, filmmakers premiered their films, artists displayed their works, singers, musicians and playwrights shared their talents.

And political discussions. T2F was a hub for discussions about the political dissent that grew around General Musharraf’s Emergency imposed in 2007. When Sabeen learnt that a young, unknown lawyer named M. Jibran Nasir was running as an independent in the 2013 elections, with just Rs 50,000, she got in touch, heard him out, then put her full faith in him. For the next five weeks, he could use T2F for her corner meetings and campaigning – at no charge.

Most importantly she gave him a voice. Just as she gave a voice to anyone who needed it – Ahmadis, Shias, and Baloch – to anyone who felt oppressed or needed to vent and “to let out their anger”, as Jibran puts it.

For him, “Sabeen was a guide, mentor, teacher, facilitator, enabler, catalyst."

As he reminded me when I called him, “Sabeen’s legacy was to speak out. Her legacy was not to cower in silence.”

That is why she agreed to host an event at T2F on Balochistan, featuring activists like Mama Qadeer, Farzana Baloch, and Mir Mohammad Ali Talpur. They’re among those who have been highlighting the case of the missing persons of Pakistan’s least-developed province, but richest in mineral resources. A province wracked by a separatist uprising stemming from a demand for equitable treatment and a share of their own resources; resources that Pakistan has recently signed an agreement with China to develop. Besides the $46 billion, a bonus is that “China knows how to curb insurgents”, as a brigadier told a friend recently.

Holding open discussions on Balochistan is pretty much a no-go area in Pakistan. Geo TV’s Hamid Mir was shot at last April after he had been speaking out about exactly this. The fallout from the episode led to Pakistan’s largest media group being brought to its knees.

Just a month ago, one of the country’s premier educational institutes, the Lahore University of Management Sciences cancelled a seminar titled “Unsilencing Balochistan”, featuring the same speakers who attended and addressed the T2F event, citing pressure from the government.

And yet when the young organisers approached Sabeen to hold the event there, she agreed despite the risks, the threats, the misgivings, all of which she was very aware of. She knew the risks she ran:

"Yes, I just don't know what the blowback entails." - Sabeen Mahmud, days before being killed. pic.twitter.com/UPEDj0Wl0Y

Another discussion on Balochistan is scheduled on May 6 at Karachi University. Will it take place now, is the question.

Already the disinformation campaign and character assassination has begun from those I call the Dirty Tricks Brigade (#DTBPk), just as it did after the attack on Hamid Mir and the cancellation of the LUMS seminar.

After Sabeen’s murder, “those who feel scared and cowed, and feel they should not speak out because it’s too dangerous, there would be no greater insult to Sabeen’s legacy if you do that”, says Jibran. “If you loved her, loved her work, loved the issues she loved, keep speaking out and raising your voice. We must do this to fulfil the dream of the Pakistan that Sabeen dreamed of, a country where there’s no discrimination in the name of religion, language, ethnicity or any pretext.”

The bullets pumped into Sabeen may have silenced her physically, but her legacy lives on. Her many admirers, friends and fellow-travellers will not let it die. For a start, here’s the link to the Tumblr site created as a tribute to Sabeen by friend and fellow techie Sabahat Ashraf that friends and followers can contribute to. 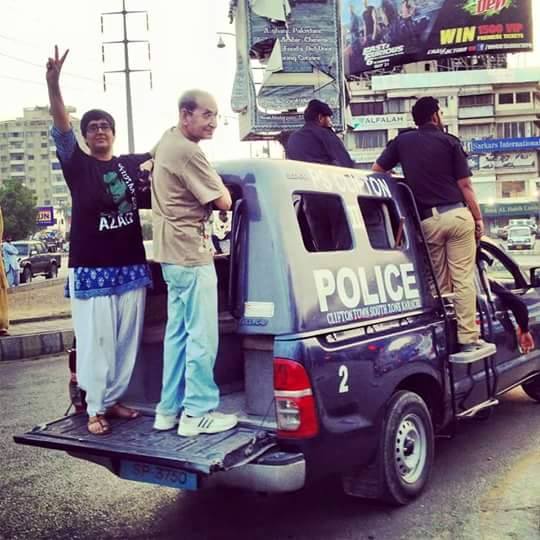