Become a Member
Ad
The Indian “Calorie Consumption Puzzle” has attracted the attention of many scholars in recent years. All of them have been struck by the same question: why has the country’s nutritional intake been declining over the past few decades while people’s purchasing power is increasing. When it is generally true that richer people consume more calories, why is the Indian trend the opposite?

Several explanations for the puzzle have been offered by researchers. One theory that has become popular is declining calorie needs – people are choosing to consume fewer calories since they need less energy. As the workforce shifts from physically demanding agricultural work to more sedentary occupations and as agriculture becomes mechanised, calorie requirements of the population are expected to decline. Another prominent explanation centres on diseases such as diarrhoea that result in loss of energy. Greater availability of safe drinking water and better sanitation in India has led to better epidemiological conditions, resulting in fewer cases of diarrhoea and other diseases, and ultimately leading to falling calorie requirements.

Other less emphasised theories include increase in the relative price of food, diversification of diets away from cereals, voluntary choice of luxuries like TVs over food, and underreporting of calorie intake due to eating outside the home.

But our research suggests that the “Calorie Consumption Puzzle” may have a different explanation. The reason why average inflation-adjusted monthly expenditure increased by 19% between 1987-'88 and 2009-'10 while calorie intake declined by 16% in rural India is food budget squeeze.

Is declining calorie intake a matter of concern?

Before we explain our hypothesis, let us consider the others.

If largely voluntary reasons lie behind declining calorie intake, then it should not be a matter of concern from a policy perspective. But there are several reasons to believe that this decrease is not purely voluntary. First, consider the fact that even though anthropometric measures, such as height-for-age, weight-for-height, and weight-for-age among children, and adult body mass index have been improving in India, they are still among the worst in the world. Their improvement is slow relative to the recent rates of economic growth. Thus, malnutrition as a socioeconomic issue is still very much with us.

Second, comparing the average calorie intake in rural India in 2009-'10 with the norms developed by the Indian Council for Medical Research, we see that the vast majority of the population falls below the required daily intake. Not only that, according to National Sample Survey data, calorie intake has been falling over time across classes, even among those poor Indian households who have inadequate calorie intake. Only the poorest 10% of the population have escaped this fate. But then, they consumed so far below the nutritional norm to begin with that the modest increase over the last three decades have still kept them severely undernourished.

Taken together, these reasons imply that purely voluntary explanations, such as reduced intake due to reduced needs or diversification of the diet, may not suffice. Factors outside the control of households must also be at work. In a paper published recently in the journal World Development (“Fuelling Calorie Intake Decline: Household Level Evidence from Rural India”, April 2015), we offer evidence for one such mechanism: a squeeze on the food budget, i.e. a stagnant food budget in real terms due to rapidly rising expenditures on non-food necessities.

What is the food budget squeeze?

According to conventional economic theory, spending decisions (on food as well as non-food items) are an outcome of households maximising their utility given their preferences and budget constraints. However, in reality, structural changes in the economy which are beyond the control of households shape the context in which these decisions are made. For example, loss of access to common property resources such as forests or rivers due to encroachment, urbanisation, or privatisation can force households to spend money on fuel, water or other necessities where these were previously obtained outside the market. Decline in livelihood options in rural areas forces people to migrate over long distances, increasing expenses on transport. And changes in the supply of social services by the State can affect private expenditures on healthcare and education.

In such a context, a food-budget squeeze can arise if rapidly rising expenses on non-food essentials absorb all the increases in total expenditures and keep real expenditures on food from rising. While the above scenarios seem plausible, it is challenging to establish causality (as opposed to merely showing correlation). 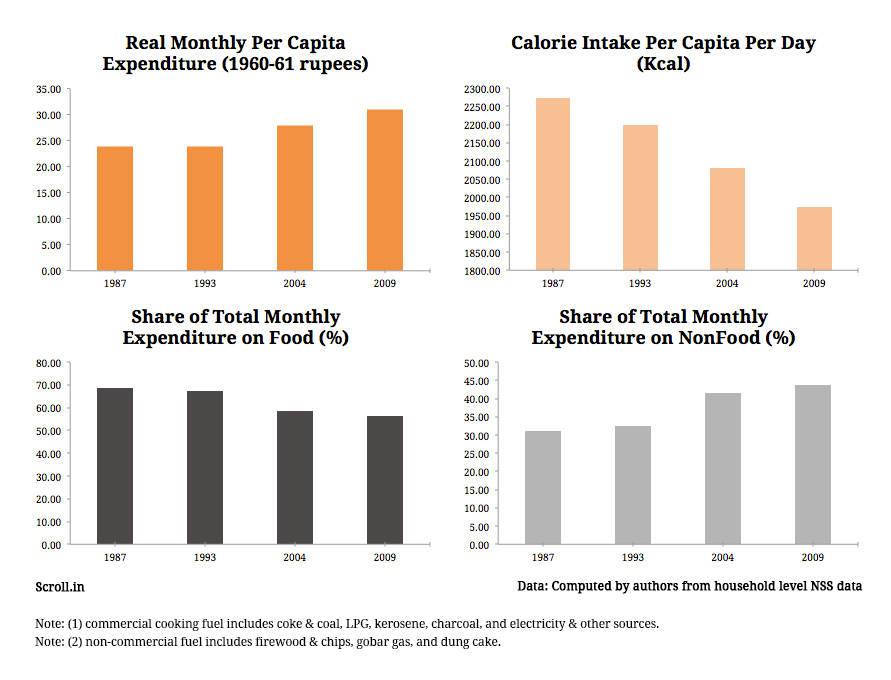 In our study we test the food budget squeeze hypothesis in the case of one essential non-food item, cooking fuel. To estimate the causal impact of rising fuel expenditures on calorie intake, we take advantage of the fact that a transition from non-commercial to commercial fuel sources is underway in rural India. The majority of rural Indian households uses non-commercial fuel sources such as fuelwood or dung, but are increasingly switching to commercially purchased kerosene and LPG. The switch from non-commercial to commercial sources, which is equivalent to an increase in the price of cooking fuel, entails significantly higher expenditures on fuel. If overall expenditures do not rise fast enough to accommodate higher fuel (and other non-food essential) expenditures, it leaves lower purchasing power for food, leading (along with other factors) to lower calorie intake.

Our method relies on the fact that at least in part this energy transition is occurring for reasons outside the control of households, such as availability of LPG or disappearance of forests. This “exogenous” component allows us to identify the impact of rising fuel expenditures on a household’s food budget and therefore on its nutritional intake.

Using rural household-level data from four Consumption-Expenditure Survey rounds of the National Sample Survey (1987-’88, 1993-’94, 2004-’05, and 2009-’10), and an appropriate empirical strategy, we show that rising expenditures on cooking fuel caused a decline in calorie intake. We find that the relative price of food and diversification of diets are important factors as well. Our results show that controlling for diet diversification, relative price changes, changes in the pattern of occupation, the epidemiological environment, education, caste, religion and other demographic factors, a 10% increase in real expenditure on fuel between 1987-’88 and 2009-’10 caused between 0.7% and 1.8% decline in calorie intake. 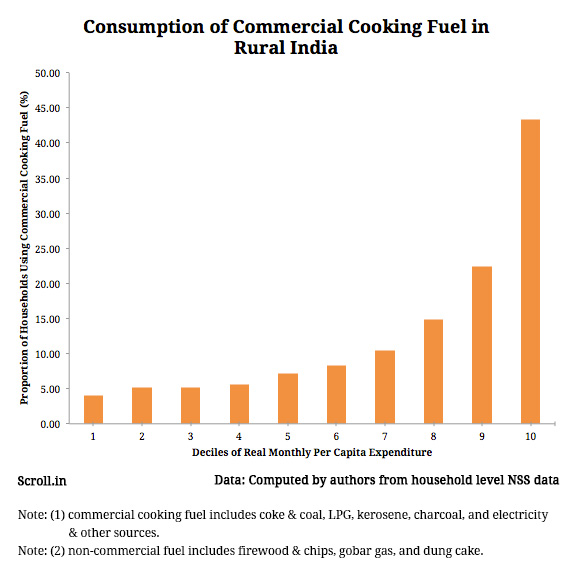 Our research suggests that declining calorie intake in India should be seen as an outcome of a growth process where purchasing power has not increased sufficiently to allow for more food as well as non-food consumption, forcing people to “choose” between the two.

The immediate policy implications of our research are that there need to be more effective delivery of food and fuel via the public distribution system, and better public provisioning of healthcare and education. While it is a welcome development that average calorie intake has increased slightly between 2009-10 and 2011-12 (the latest year for which reliable and nationally representative data is available from the National Sample Survey), as yet there is not enough evidence to suggest that the long-term trend of declining calorie intake has been decisively reversed. There is therefore no room for complacence. In fact, longer run policy interventions, like improved investments in agriculture as well as creation of more non-farm employment opportunities, are essential to increase rural purchasing power sufficiently to ease the food budget squeeze.