Contribute Now
Ad
From the very beginning of his election campaign, Prime Minister Narendra Modi has spoken about building 100 smart cities in India. The promise has always been part of the great Modi vision to make this India's century, alongside bullet trains, linked rivers and bringing back black money. But not much had been done, with only Rs 7,000 crore allocated to the smart cities in this year's budget and a tiny fraction of that spent.

On Wednesday, the Union Cabinet finally took the bull by the horns. It cleared an approval for Rs 48,000 crore to be allocated to the Smart Cities Mission, with Rs 100 crore to be given to each city per year for the next five years. That represents a huge investment in urban renewal overall, although a relatively small amount per city, making it clear that the government still expects most of the real financial support for smart cities to come from private sources. Reports suggest the government plans to begin with shortlisting 20 cities.

And since it first spoke about smart cities in last year's interim budget, the government has made some progress on defining what it means with the project.

What are smart cities?
There’s no simple definition for smart cities. The term encompasses a vision of an urban space that is ecologically friendly, technologically integrated and meticulously planned, with a particular reliance on the use of information technology to improve efficiency. In most parts of the world, the idea begins with using digital technology to make a city more efficient and to improve wellbeing.

The Modi government's idea is a little different. The government's reference note for Members of Parliament on the issue actually offers a fairly simple definition: "Smart Cities are those that are able to attract investments." Everything else, such as good infrastructure and simple processes that make it easy to start and run businesses, follow from this.

What is smart about them?
Traditional ideas of smart cities suggest lots of data collection, using sensors – electricity, gas, water, traffic and other government analytics – that can be carefully compiled and integrated into a smart grid and then fed into computers that can focus on making the city as efficient as possible.

The Modi government is going a bit broader with its concept of a smart city, to basically mean any city that works well, especially for businesses. Admitting that it is hard to define smart cities, the ministry of urban development's concept note from last November on the issue still attempts to do so. 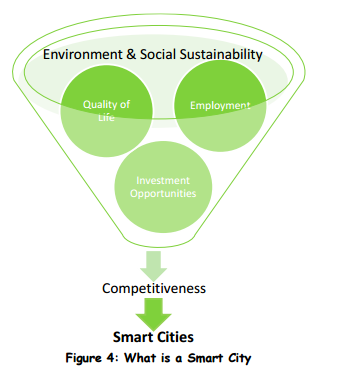 "Smart Cities are those that are able to attract investments and experts & professionals. Good quality infrastructure, simple and transparent online business and public services processes that make it easy to practice one’s profession or to establish an enterprise and run it efficiently without any bureaucratic hassles are essential features of a citizen centric and investor-friendly smart city," the note said.

Why do we need them?
India’s is urbanising at an unprecedented rate, so much that estimates suggest nearly 600 million of Indians will be living in cities by 2030, up from 290 million as reported in the 2001 census. 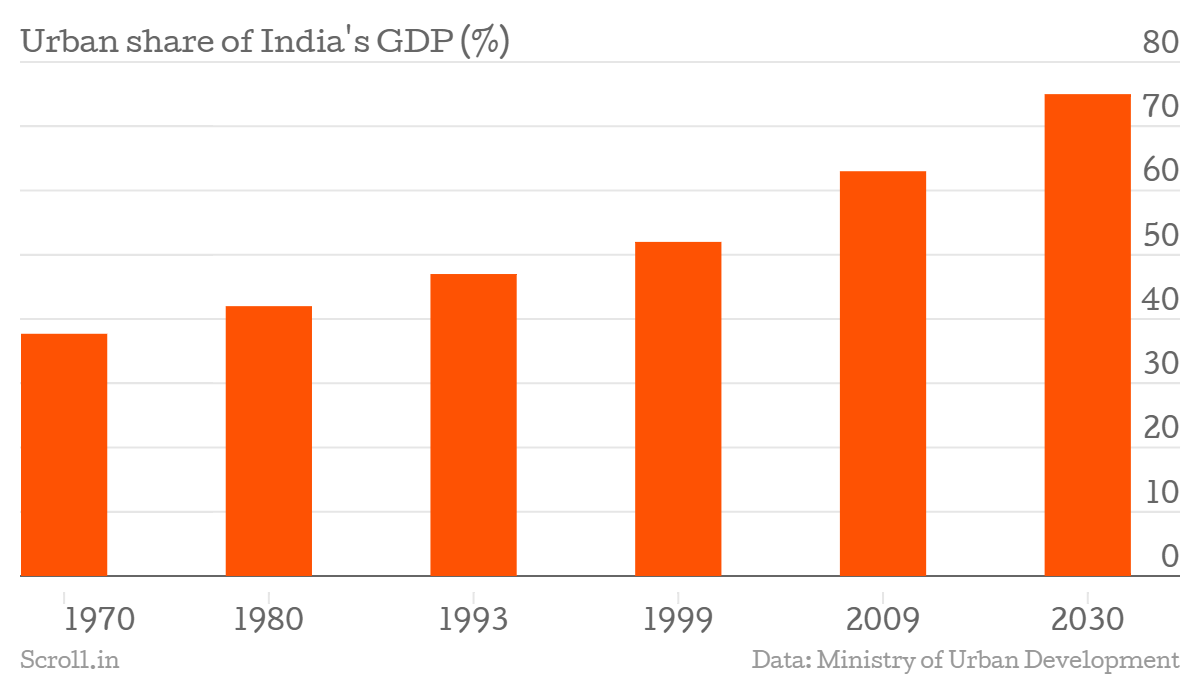 Alongside the hordes of Indians go the jobs and the money as well: a McKinsey Global Institute study estimated that cities would generate 70% of the new jobs created by 2030, produce more than 70% of the Indian gross domestic product and drive a fourfold increase in per capita income across the country.

“The cost of not paying attention to India’s cities is enormous,” the McKinsey report said. “The speed of urbanisation poses an unprecedented managerial and policy challenge – yet India has barely engaged in a national discussion about how to handle the seismic shift in the makeup of the nation.”

Are they going to be new cities?
In his budget speech last year, Jaitley listed out exactly why the government believes it needs to be spending money on 100 smart cities. He claimed that “unless new cities are developed to accommodate the burgeoning number of people, the existing cities would soon become unlivable.”

But the government isn't going to be building entirely new cities with Rs 100 crore each. Instead, the money will mostly be spent on upgrading existing facilities, since the very selection process requires current cities to prove that they are eligible. States could potentially suggest areas that are going to be built up as options for the smart city mission – Andhra Pradesh's new capital for example – but most will come from existing cities.

Which cities have been picked and how ?
The Lok Sabha reference note suggests one satellite city for each of India's metros, all state capitals, all cities in the population range of 1-4 million or more, and few others including those of tourist and religious importance.

The Cabinet's note explains that the cities will be picked based on a City Challenge Competition, with the aim of financing those that have shown the potential to fulfill the mission's objectives. "Each state will shortlist a certain number of smart city aspirants as per the norms to be indicated and they will prepare smart city proposals for further evaluation for extending Central support," the cabinet note said. Reports suggest that the government will first begin with shortlisting 20 cities.

How will the government turn them smart?
The cabinet note focuses on retrofitting, redevelopment, pan-city initiatives and development of new cities. It also gave a few examples.

"Under retrofitting, deficiencies in an identified area will be addressed through necessary interventions as in the case of Local Area Plan for downtown Ahmedabad. Redevelopment enables reconstruction of already built-up area that is not amenable for any interventions, to make it smart, as in the case of Bhendi Bazar of Mumbai and West Kidwai Nagar in New Delhi. Pan-city components could be interventions like Intelligent Transport Solutions that benefits all residents by reducing commuting time," it said.

Who will pay for them?
Rs 100 crore per city will clearly not be enough, and even if more is added, it’s unlikely the government will have the resources to pay for the cities. In the budget last year, the government announced that it was relaxing norms for foreign direct investment to make it easier for outside companies to invest in smart cities. The Cabinet note also mentions that it expects Special Purpose Vehicles to be set up for smart cities by each state, which will ensure their financing. In addition, India has spoken to France, Japan and Singapore and other countries about collaborating on the projects.

What about those cities that don’t make the cut?
At a meeting regarding the smart cities in June 2014, the urban development ministry secretary said that the focus will not be just 100 cities but all urban areas across the country. “There exists no valid reason to leave the 101st city in the process of development,” he said. Those will not, however, be eligible for central funds under the Smart City Mission.

Do we have any smart cities already (and who is building them)?
A quick Google search for India’s “first smart city” produces more than 70,000 results, and many of them lead to different places.

In Bangalore, Cisco is working to set up a smart grid-based Education City, where all the utilities will be integrated with data. Outside Mumbai, the Lodha group has given IBM a contract to build all data systems in their Palava city project. Kochi has a special economic zone that seeks to replicate Dubai’s smart city project. Gujarat has two projects, the Dholera urban area, which is part of the Delhi-Mumbai industrial corridor, and the Gujarat International Finance Tec-City, both of which have problems but are being touted as examples that could be scaled up across the country.