Contribute Now
Ad
Fresh trouble seems to be brewing for All India Anna Dravida Munnetra Kazhagam supremo and former Tamil Nadu Chief Minister J Jayalalithaa, a day after the Karnataka High Court acquitted her of all charges in a 19-year-old Disproportionate Assets case.

A perusal of the order copy shows that Judge Kumaraswamy of the Karnataka High Court has made an error in calculation of the personal loans taken by her. In Page 852 of the order, the judge says Rs 24,17,31,274 is the total value of all the legitimate loans taken by Jayalalithaa and her co-accused, close confidante Sasikala and her relatives Sudhakaran and Elavarasi. 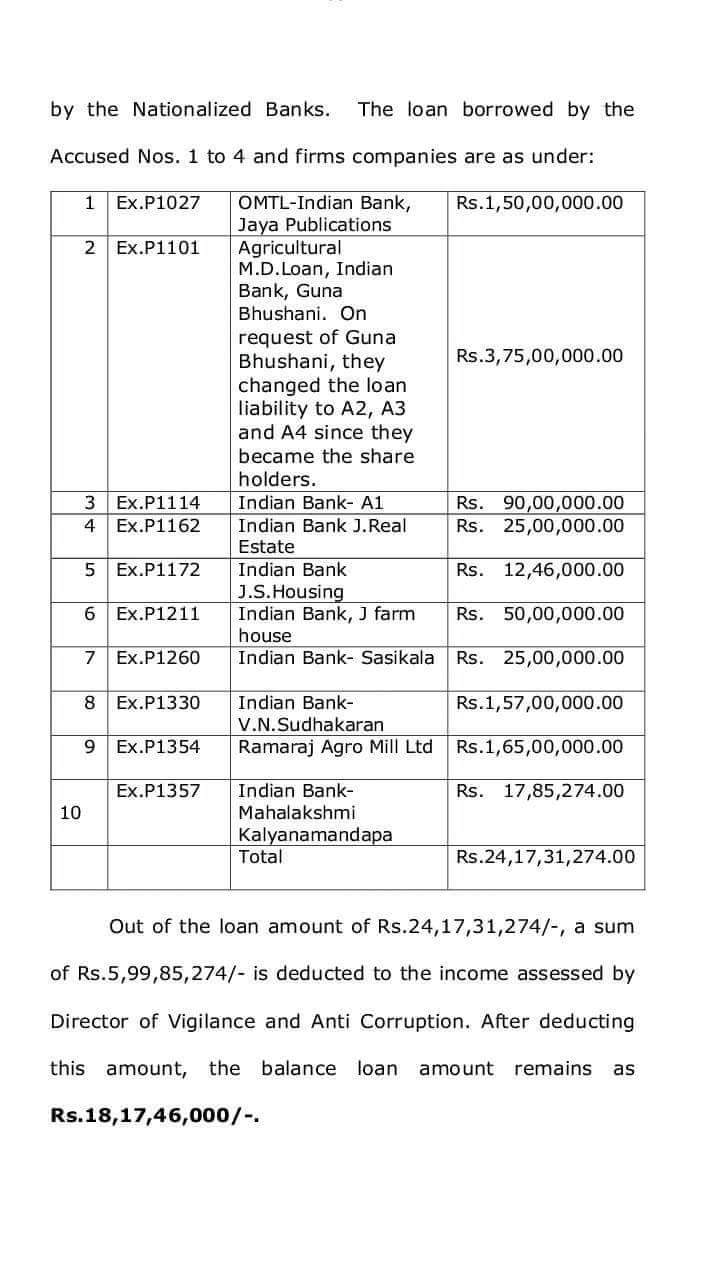 The discrepancy comes to  Rs 13,50,00,000. This means that the amount of loans taken by Jayalalithaa and her co-accused, which has been considered as legitimate by the Karnataka High Court, would now be less by Rs 13.5 crore.

Breakdown of the assets and income
As per Karnataka High Court order dated May 11, 2015

In its verdict on May 11, the Karnataka High Court had said

“The percentage of disproportionate assets is 8.12%. It is relatively small. In the instant case, the disproportionate asset is less than 10% and it is within permissible limit. Therefore, Accused are entitled for acquittal. When the principal Accused has been acquitted, the other Accused, who have played a lesser role are also entitled for acquittal.”

Special Public Prosecutor for the Karnataka High Court BV Acharya said that his team had caught onto this discrepancy earlier today. “We are looking into this issue,” he said. He refused to comment on whether the Karnataka government would appeal against this verdict in the Supreme Court.

Dravida Munnetra Kazhagam General Secretary Anbazhagan, who impleaded himself into the case in 2003, is likely to go on appeal in the Supreme Court on the basis of arithmetic errors.

“This is not merely a clerical or arithmetic error,” said A Saravanan, lawyer for the DMK. “This goes to the root of the matter. This whole case is based on tallying of accounts, it is what decides the case. This is a razor thin line. The High Court Judge has said that disproportionate assets below 10% is okay and he has held the proportion of disproportionate assets at 8.12%. He has given benefit of doubt to the accused. But this changes everything now,” he said.

Although remaining non-committal on appealing in SC, Saravanan said there is a high probability that they would go in for one.

In my Appeal to SC In JJ DA case. I will prove that the KHC judgment is a "tragedy of arithmetic errors". JJ will have to resign again if CM

Swamy had, on May 11, told reporters that he would not appeal against the Karnataka High Court verdict.

Jayalalithaa’s counsel refused to comment on these developments. “I have not studied the judgement and therefore am not able to comment,” said B Kumar, defence counsel for Jayalalithaa.

Legal experts say that as per Section 362 of the Criminal Penal Code (CrPC), no court can alter or review its judgement or final order once signed, except to correct a clerical or arithmetic error.

The prosecution had already slammed the verdict on Monday, with Special Public Prosecutor BV Acharya saying that the prosecution had not been heard in this case. “The prosecution has been seriously prejudiced as we have not been given time to make oral arguments,” he said. “We were given only a day’s time to file written submissions. This has seriously prejudiced the case. The principles of natural justice have been violated in this case while the defence has been given two months to argue their case,” he said.

Other political leaders in Tamil Nadu too flayed the verdict with the Pattali Makkal Katchi’s Ramadoss issuing a statement saying, “I request the Karnataka government to file a petition in the Supreme Court against this verdict which is full of miscalculations. The verdict should be set aside until the appeal in the apex court is completed.”

DMK chief M Karunanidhi had stated yesterday that this was not the final verdict. “I would like to remind everyone that conscience is above all courts,” he said in a statement.