Contribute Now
Ad
When the price of crude oil dropped from $110 a barrel in mid-2014 to below $50 by January 2015, there were fears that it would destroy the “green revolution”. But a look at what’s gone on in the renewable energy sector since oil prices dropped shows that low energy prices alone do not undermine investment in renewable energy.

Classic economic theory would support the idea that a drop in oil prices leads to reduced innovation in alternative energy sources. According to the induced innovation hypothesis put forward by the influential economist John Hicks in 1932:

A change in the relative prices of the factors of production is itself a spur to invention, and to invention of a particular kind – directed to economising the use of a factor which has become relatively expensive. 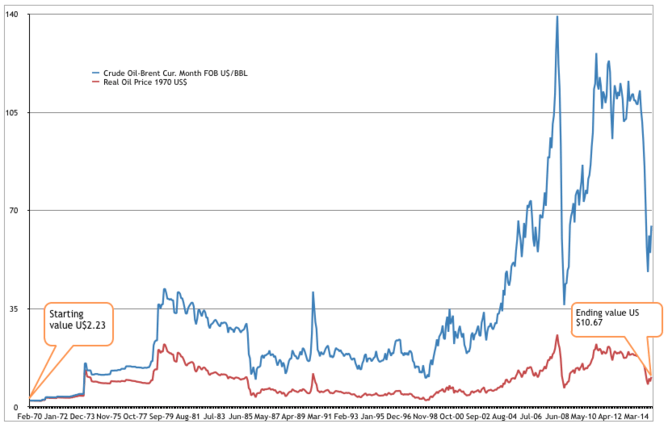 Oil prices since 1970 in US$. Thomson Reuters Datastream

Using the price of oil as a proxy for the price of energy, the graph above shows considerable variation in energy price levels from the 1970s onwards. Rising prices during the 1970s spurred investment in energy-efficient products and technologies, resulting in a 50% increase in the production and consumption of renewable energy in the US between 1973 and 1983 (as shown below). 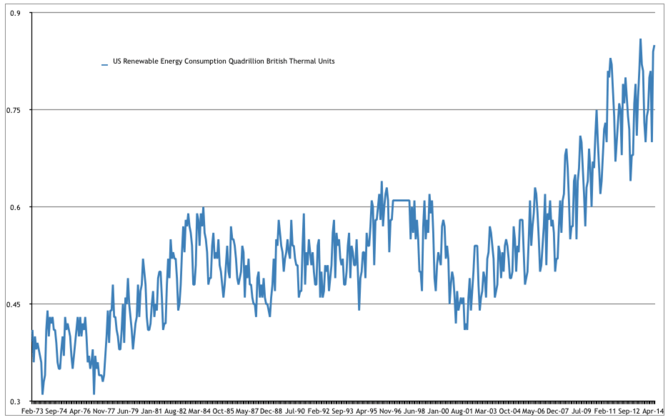 Notwithstanding the robust growth in renewable energy consumption, the fortunes of renewable energy companies have been volatile over the past ten years and remain subdued following the financial crisis of 2008 (as the graph below shows). So the question remains as to whether or not they can compete in an environment where oil is cheap. 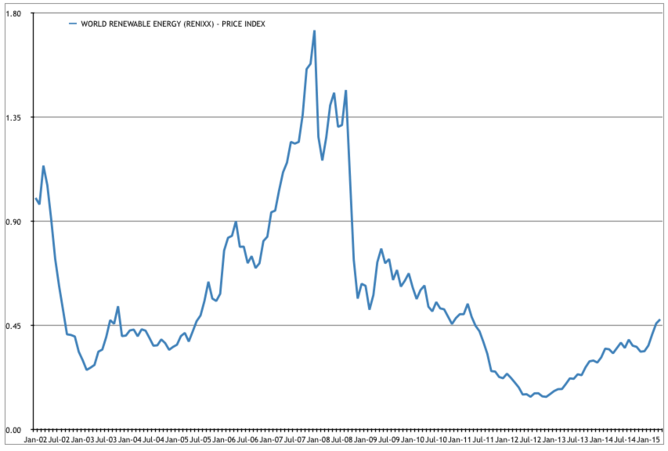 While it has been shown that the incentives for investment and innovation are responsive to changing energy prices, in the short run cheap oil may be a deterrent to investment and innovation in renewable energy. But this also applies to investment in conventional energy. A more useful question from the point of view of a long-term investor (such as a pension fund) is: should we continue investing in renewable energy projects and should governments continue to encourage this investment? The simple answer is yes.

The future supply and price of fossil fuels are largely unknowable. As all the figures above show, the past 20 years have seen oil prices range between around US$10 and US$150 per barrel. An index of the top 30 renewable energy stocks compiled by the International Economic Platform for Renewable Energies fluctuated over a wide range that peaked in January 2008 at a level 12 times higher than the trough in December 2012. So the cost of renewable energy is also variable but not to the same extent – and the trend is one of declining prices.

Professional forecasters acting on behalf of airlines, governments, shipping, energy and other related entities have lost large fortunes through incorrect calls on prices. Ryanair, for example, lost €200m on a failed oil price hedge. Sometimes losses occurring as a direct result of hedging strategies were greater than if no steps to forecast prices or to protect against price changes had been implemented.

If the only thing we can say with certainty is that the future price and availability of different energy sources are uncertain, investment theory tells us that the best strategy for protecting against such uncertainty is to avoid putting all our eggs in one basket. Instead, diversifying energy supplies and the energy-related stocks in our investment portfolios should be the main objective.

Even if investments in renewable energy technologies are (relatively) unprofitable under current conditions, they provide options that can be exploited later, as and when changing conditions make them profitable. The fact that these technologies are currently less profitable does not render them valueless; rather they display the characteristics of an “out of the money option”.

Another important factor that is likely to impose a more continuous and sustained incentive for investment in renewable energy is climate change. Growing amounts of legislation will help the further growth of greener energy and may enhance the development of technologies for storing energy generated from renewable sources which are highly intermittent, such as wind and solar power.

With or without climate change, however, investment in renewables is likely to replace investment allocations that have traditionally been assigned to conventional energy, implying the arrival of new, innovative and environmentally benign solutions. The returns from these investments will depend upon a number of factors – the degree of competition between the energy industry players, the nature of government interventions and the future evolution of energy prices. Given the uncertainty surrounding all of these variables, the only sensible choice is to hedge your bets by investing in as wide a range of technologies as possible.