Become a Member
Ad
The little boy of international weather is here. So called because it usually turns up around Christmas time, the El Niño weather pattern – a phenomenon that starts with a warmer Pacific Ocean and ends up distorting weather across the globe – has turned up in May. In March, the American body monitoring oceanic temperatures declared a weak El Niño event. This week, Australia's met department has gone a step further, saying it will become a "major" El Niño pattern.

That's bad news for India. The India met department has already predicted deficient rainfall for the coming monsoons. A substantial El Niño event, generally associated with dry spells and, in the more extreme cases, droughts, would not be good news for India's agricultural sector that is already reeling from unseasonal rains and crop damage.

But first, what is El Niño?
The Pacific Ocean tends to be warm on one end and cool on the other. The Indonesian side is, on average, 8°C warmer at the sea surface than they are in Peru. Once every two to seven years however, the trade winds that usually help keep all of this in check are disrupted, although scholars still aren't sure why. When this happens, however, the deep frigid water that tends to keep the South American side of the Pacific Ocean cool tends to stay deep.

That means the ocean is suddenly very warm around South America. This graph, from the US National Ocean and Atmospheric Administration, gives you an idea of how anomalous these temperatures are during an El Niño event.

When this happens, especially at a severe level, all hell breaks loose. From masses of fish dying in Peru's seas to droughts in Australia and increased chances of tropical cyclones in particular bits of the Pacific Ocean, the phenomenon has ripple effects all around the globe.

How do we know El Niño is here?
Scientists carefully monitor temperatures of the oceans around the sea surface, to see if there are indications that the phenomenon is likely to develop. The key is to compare temperatures in the Pacific Ocean to their averages. If the sea around South America, particularly along the equator, is warmer then usual, then it's quite likely that the little boy has come visiting.

Here's what the temperatures look like as of May 11, according to the NOAA. The image makes it clear that the seas around the South American equator are much warmer than usual.

What do weather forecasters predict?
Australia has declared that the El Niño effect will be substantial. The US has acknowledged one. Even India's met department, while announcing its all-important monsoon forecast, said that the likelihood of an El Niño event was around 70%. With the latest indicators, this is likely to get even stronger. The IMD has also already predicted a deficient monsoon, around 93% of the overall average. Meanwhile, private forecaster Skymet has been insistent that the El Niño effect is still very limited and will not have a major impact on India's monsoon which it predicts will be normal.

What does that mean for global weather?
The US National Aeronautics and Space Administration also offers up a basic graph to show what happens to the global temperature during an El Niño event.

The NOAA has a simple map that explains how an El Niño event affects weather patterns during the summer months of the Northern Hemisphere. 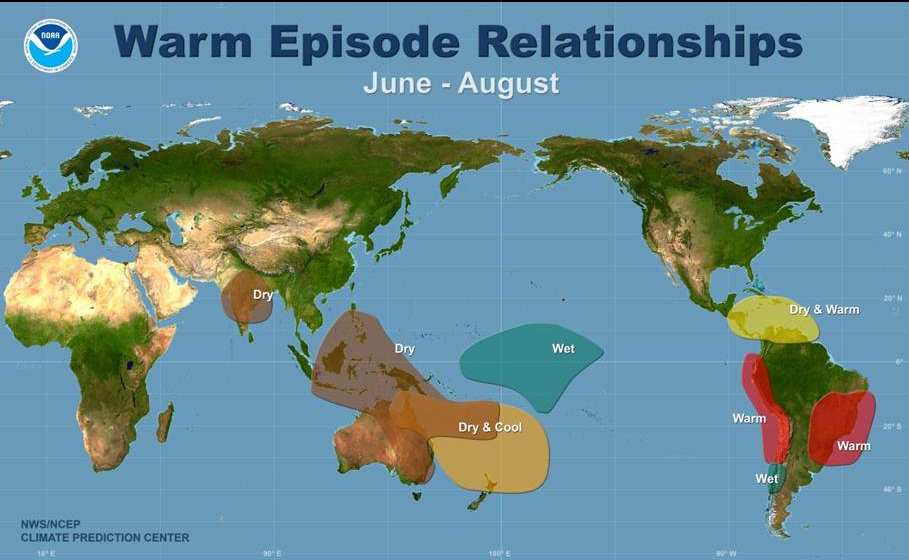 What does this mean for India?
Mostly, it means bad things are on the horizon. The last major El Niño event in 2009 caused a major drought and seriously affected agricultural production, subsequently impacted large portions of the economy. Indeed, in general, El Niño events tend to be associated with poor rainfall and better chances of a drought in India.

Researchers Sweta Saini and Ashok Gulati looked into the correlation between the two. "It is very clear that not all El Niño years converted into droughts for India and not all [but most] Indian droughts happened in El Niño years. However, since the 1980s, the association between the two climatic phenomena appears to have strengthened," they wrote. 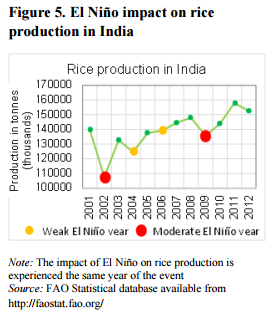 If it does develop, that's going to be bad news for the Indian economy, as the above UNESCAP graph indicates. Researchers looking into the macroeconomic effects of El Niño concluded that it had a noticeable effect on the country's performance.

"El Niño conditions usually coincide with a period of weak monsoon and rising temperatures in India, which adversely affects India's agricultural sector and increases domestic food prices. This is confirmed by our econometric analysis where Indiia's GDP growth falls by 0.15% after the firrst quarter," Paul Cashin, Kamiar Mohaddes and Mehdi Raissi wrote in their paper.

As Gulati and Saini point out, though, not every El Niño year coincides with a drought in India. Some researchers even suggest that the effect of the phenomenon is staggered and impacts India only the following year. For now, though, Indian authorities will have to wait, watch and hope that the arrival of weather's little boy doesn't turn into disaster for India.