Contribute Now
Ad
Prime Minister Narendra Modi never misses the opportunity to get in a good selfie. His most recent photo with the Chinese Premier Li Keqiang is being described as being the world’s most powerful selfie: if the Gross Domestic Product of both the countries represented in the image were to be added up, there's more than ten trillion dollars in the picture.

For Premier Li, this may be his first selfie, but for Modi, this is just one among a number of photos he’s taken over the course of his first year in power.

Where selfies are concerned, there's always scope for one more! PM @narendramodi with Premier Li, Temple of Heaven pic.twitter.com/f5Ubv5QajU

The image has received a great deal of attention in the international media. "That put two of the most powerful people in countries with a combined population of around 2.5 billion people – more than one-third of humanity – in the same frame with no official photographer involved," the Wall Street Journal said.

Added CNBC, "The leaders of two of the world's fastest growing countries just made selfie history. Sure, a picture can say a thousand words – but it's not every day one can speak for over a third of the world's population".

One year of Modi selfies

Not all Modi's image-making exercises have left a fuzzy feeling. After voting in the Lok Sabha elections back last year, Modi's photo of his inked finger along with the lotus symbol of his Bharatiya Janata Party led opposition parties to complain that he'd violated the rules by taking publicity shots within the boundaries of an election station. (The complaint didn't seem to go anywhere.) 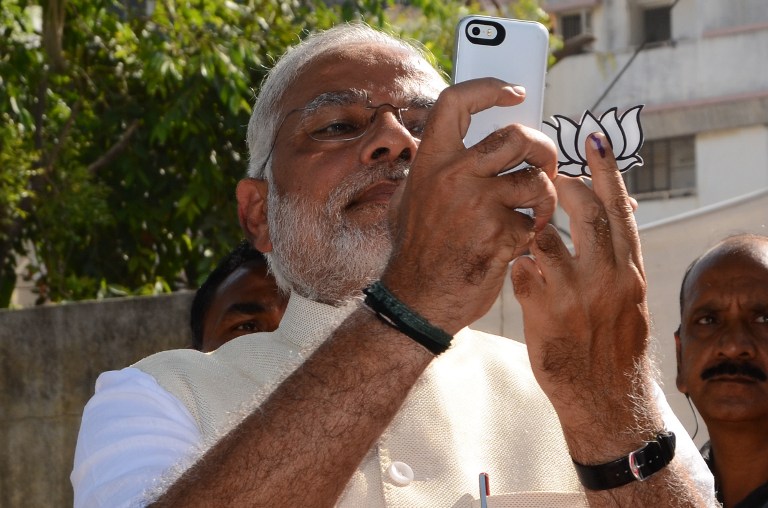 Over the course of the last year, Modi has travelled to 18 overseas countries. According to the Wall Street Journal  he has spent 52 days of his first 365 days in power outside of India.

With each trip, the number of selfies keep on mounting. From Bollywood actress Sonam Kapoor to writer Chetan Bhagat, everyone wants to get into the frame.

Dear @chetan_bhagat, many many happy returns of the day! Sharing the selfie you took last evening pic.twitter.com/JEhky8lOWJ

For the Delhi elections in February, Modi’s team came up with the #SelfieWithModi hashtag and built thousands of “selfie” booths, which let regular citizens to get themselves photographed next to a virtual Modi. Within just a week, over half a million selfies were reported to have been taken from the booths in the capital region.

On his trip to Melbourne, in November of 2014, he was taken to the iconic Melbourne Cricket Ground. The Prime Minister of Australia couldn’t say no to Modi’s request for a selfie.

With my friend @TonyAbbottMHR at the MCG. pic.twitter.com/mprgKYPuxG — Narendra Modi (@narendramodi) November 18, 2014

Here is one with students in Queensland.

In France, Modi posted with a group of students.

Took selfies with young friends at CNES. We were all trying to take the best selfie out there. pic.twitter.com/xPmKNCgi3G

On his Fiji trip, right after Australia, Modi didn’t miss his opportunity to take a selfie with Frank Bainimarama, the country's prime minister. This time though, Modi let his friend take the photo.

PM Bainimarama took our selfie before the banquet he hosted yesterday evening. pic.twitter.com/0IHQFouNmL

The most memorable photo though was of Narendra Modi and his mother after he was declared India’s newest Prime Minister on May 16, 2014.

Sought blessings from my Mother pic.twitter.com/OegXhartLx

A Varanasi MLA is attempting to steal Modi’s development narrative