Become a Member
Ad
In early April, PC Zosangzuala lost his job. About three years ago, the 28-year-old had been hired by an Indian government programme which supports India's middle schools – Rashtriya Madhyamik Shiksha Abhiyan. The job contract signed by “Peecee”, as his friends call him, suggested the programme would run till 2017. However, on April 4 or April 5 – he doesn't remember the exact day – he got a letter from the department saying the part of the programme that employed him had been closed.

Peecee, with an earnest mien which makes him look much younger than 28, was not the only one axed. In all, 366 staffers, mostly lab technicians and clerks, lost their jobs.

The job cuts have followed a budgetary squeeze in New Delhi. This year's national budget has slashed central allocations to the middle school programme from Rs 1,500 crore to Rs 1,010 crore, said a senior official in Mizoram's education department.

Faced with less funds, the central government officials overseeing the programme retained teachers but axed clerks, lab technicians and counsellors. The Mizoram government could have retained the 366 employees fired by the centre, but their salaries add up to Rs 6.8 crore a year – money the cash-strapped state doesn't have.

Since jobs are hard to find in Mizoram, the sacked employees – mostly between 25 and 35 years old – panicked. Some of them had married recently. Others had become parents. Some others had taken bank loans they were still repaying. Peecee had taken a loan to pay for the treatment of his grandmother who eventually succumbed to cancer.

In late April, 70-80 of them went on a hunger strike. They went without food for 12 days, calling the fast off only after the state education minister assured them that whenever the state finds funds, they will be the first to be hired. 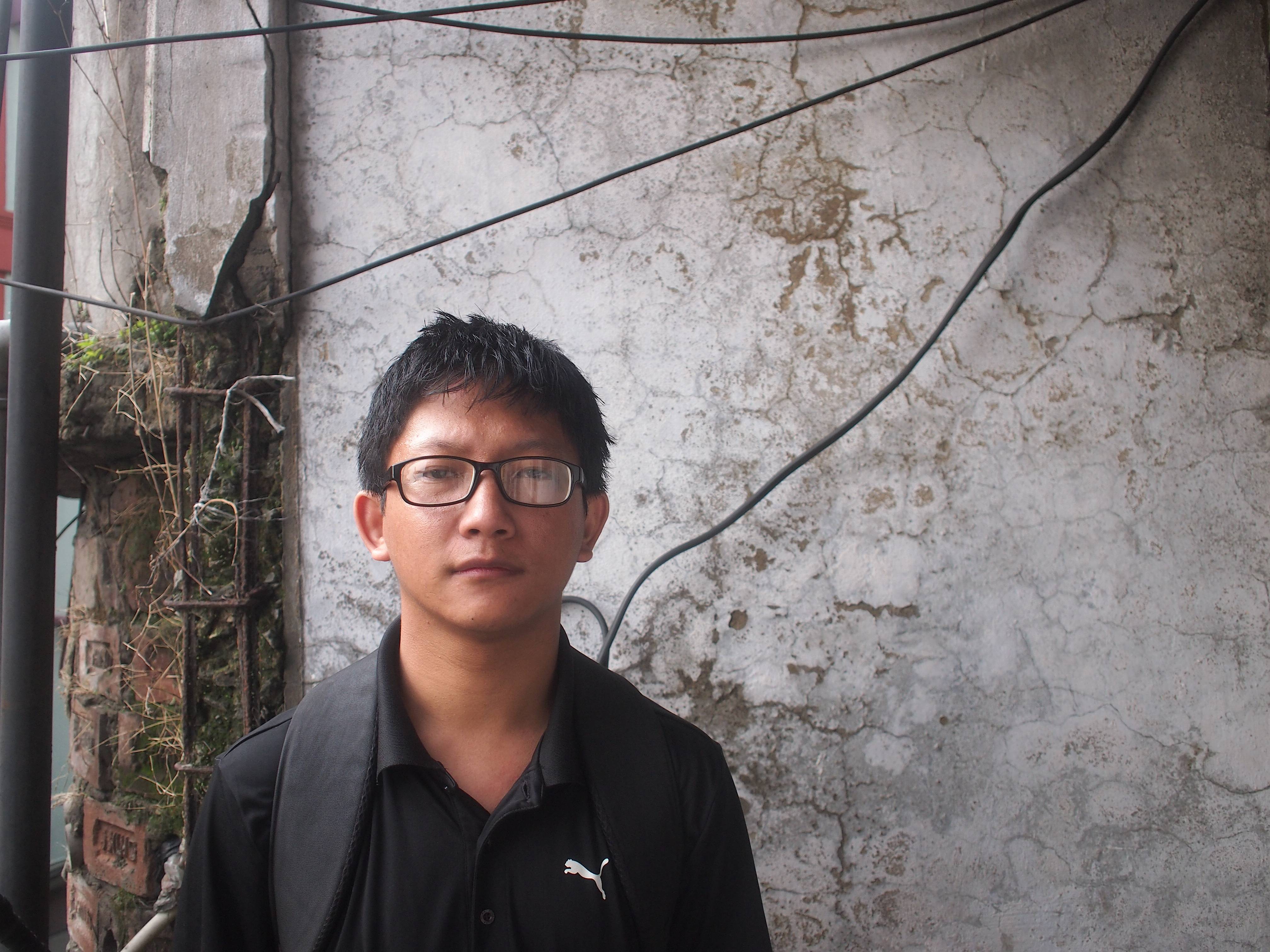 PeeCee lost his job in April.

In the weeks and months ahead, Mizoram is likely to see many more such protests. This is partly due to the 14th Finance Commission, which has altered the way revenues are distributed between the centre and the states. Until now, state departments have run on money from three sources – their own revenues, the state's share of taxes collected by the centre, and development programmes funded by the centre and implemented by the states. States with high non-plan expenditure like salaries but low revenues – like those in the North East – also receive deficit grant funding from the centre.

One critique of this system was that a large chunk of the funds received by state governments were “tied” funds – funds which could be used only for the purpose defined by the centre. This, it was said, took away financial autonomy from the state governments.

With the centre accepting the commission's recommendations on how to overhaul funding to state governments, all this has changed. In the new system, states' share of central taxes has risen from 32 per cent to 42 per cent. At the same time, the centre has cut back on the development programmes it funds in states. The rationale that has been offered is that states would now get more funds they can deploy any way they like.

In theory, this means states can undertake more locally relevant developmental work. But in practice, while some states gain from the new system, others lose. Mizoram is one of the losers. In 2014-'15, the state got about Rs 5,300 crore from the centre. This year, after increases in both its share of central taxes and deficit grant funding, it will get Rs 4,200 crore from these two sources. However, the centre's decision to cut back on development funding – the third source – might nullify these gains.

In a previous report, Scroll outlined how the state was struggling to fund its anti-AIDS programme. Its sequel tried to identify, using the State Health Mission as an instance, the reasons for this funding crisis. The answer, we found, lay in the construct of Mizoram's economy.

The state depends on the centre for as much as 90% of its annual budget. In recent years, as Mizoram's expenditure has climbed, it periodically runs out of money. At these times, it redirects central allocations – for health, education and other schemes – towards more expedient monthly requirements like salaries or interest payments. As Scroll's reports showed, every time the government redirects funds, the people of Mizoram are deprived of vital services.

At the same time, given the low revenue generated by the state, some programmes – like the State Health Mission – are entirely dependent on central allocations.

But now, the centre is cutting back on those payments. It has divided its development programmes into three categories – those it will no longer fund, those it will fund as before, and those where the ratio between central and state funding will change.

Typically, the centre used to put in 90% of the money needed to run a programme. But now, said an official in the Mizoram finance department, the centre wants to bring down its share to 50-75% which means the state would need to put in as much as 25-50% of the funds needed for these schemes. At the same time, the state has to support the programmes the centre will no longer support.

What does this mean for Mizoram?

A letter from the state finance department dated 7 May lists 22 programmes where the funding pattern will change and 8 projects that the centre will no longer fund. Take the Rashtriya Kisan Vikas Yojana, one of the biggest agriculture programmes running in Mizoram. The centre-state ratio for scheme until last year was 90:10. Under that formula, in 2014, after the state government raised its spending to Rs 14 crore, the centre released another Rs 128.9 crore for this programme.

But this year onwards, the state government will have to pay more to keep the programme size intact. While the agriculture ministry is yet to communicate what the new ratio will be, back of the envelope calculations show that if Mizoram wants the programme to operate at the same size – Rs 140 crore – it will have to cough up Rs 35 crore (25 per cent contribution) or Rs 70 crore (50 per cent contribution).

It is the same story with a set of other critical state programmes – like the National Health Mission, the state AIDS programme, education programmes, you name it. If we assume that, between the state and the centre, Rs 100 crore was being spent on each of the 22 projects. Then, Mizoram paid Rs 220 crore while the centre paid Rs 1,980 crore. If the funding ratio for all of them changes to 75:25, then Mizoram now has to pay Rs 550 crore.

In some programmes, like the Integrated Child Development Scheme, which runs a network of child care and feeding centres, the ratio is 50:50. This means the state's contribution would have to rise steeply to keep the programme intact. At the same time, the state has to support – or axe – the eight programmes the centre will no longer fund.

The big question is whether Rs 4,200 crore is enough for the state to meet its existing expenditure plus these new commitments. The official in the state finance department doesn't think so. “The centre is saying that we have to match the centre's allocation. It will be very hard for the NE states to manage anything more than 90:10, like 60:40 or even 70:30. We cannot do this. In the name of more fiscal space to the states, why are they taking away these programmes?”

As it is, the state government may not even get Rs 4,200 crore each year. As the official said, “Share in central taxes comes with conditionalities. Which means that the increase (100%) will never be fully delivered. The 100% is what we can get at the most. A lot also depends on how much the centre is able to raise in taxes.”

But what is most surprising is this: The centre has accepted and rolled out the Commission's recommendations without taking the states on board, or letting them grasp how they would be affected. As the states have come to understand the full implications of the changes, there have been belated protests from state chief ministers like Assam's Tarun Gogoi and Mizoram's Lal Thanhawla. In Mizoram's case, its finance department officials estimated their new allocations only when the state received its first monthly instalments of "share of central taxes" and "deficit grant funding" in April.

At this time, a month after the new financial year started at Mizoram, information is still trickling from central departments about the new ratios. The state has to learn about the new funding ratios, decide which programmes it can afford and which ones it will have to axe, and then put in its share.

“They will have to shut down some programmes," said James Thanga, a professor of economics at Mizoram University. He pointed out that while the National Rural Livelihoods Mission and National Urban Livelihoods Mission had just started, other programmes like AIDS control, farmer development, child nutrition and health have been running for decades and would have to be continued.

The departments which survive will see delayed fund allocation this year. A senior official in the middle education department at Mizoram told Scroll: “It is mid-May and we still do not know what we will get. We were about to start construction of new schools – the tendering was over. But now we are not sure about how much money will come.”

In the state, at this time, the funding crisis is still sinking in. Some feel this might even be a blessing. Successive governments in Mizoram, as in other parts of the north-east, have been very profligate. The crisis might force them, some people speculated, to be wiser and stop relying on Delhi for money.

For this, the state needs to create more economic activity. But given its location, poor connectivity and ecological conditions, only some activities are viable here. " We could invite companies to come and do organic farming or oil palm cultivation," said the official. "But for that, we would have to give them large swathes of forestland.” Apart from the questions about forest loss and oil palm's environmental impact, these activities will also take time to establish themselves and generate revenues.

And time is what Mizoram doesn't have. The funding crisis is already here.

Can Mizoram emerge unscathed from the looming crisis by merely curbing wasteful expenditure or will deeper cuts need to be made? At the same time, will the government want to cut back on the programmes it uses to dole out patronage? If they make deeper cuts in social programmes, then what happens to the people? Like the health reports showed, things are already grim.

These are the questions that state officials are struggling with. “How do we do this? There are no state assets to sell," said the official in the finance department. "We will have to borrow against future remittances of the state.” I ask what that means. The official says: "future payments like salaries".

In essence, the government will take a loan and repay it from the next year's central allocation. That will worsen the financial shortage that year. If the state does follow that plan, a vicious cycle will begin.

The other course of action, suggested Thanga, the economics professor, could be raising revenues by charging for land transactions and increasing the professional tax. With the lifting of prohibition, he said, loss making public sector units – the state industrial corporation, the agriculture marketing corporation, even the state handloom and handicraft development corporation – have applied for liquor distribution licenses. “This should help them become viable," he said.

But the question that is the most difficult to answer: why did the centre force such an abrupt transition on the states? It is going to impose penalties on the people of Mizoram and elsewhere.

The Amul story: How politics is hurting the economics of Gujarat’s milk cooperatives