The lobby of Hotel Veer Rajput Palace, deluxe, is dimly lit and manned by two guys in identical green check sweaters, one reedy with a silver ear stud, one portly and balding, also with silver ear stud. The counter stretches like a redoubt around them. On one end is a small television set; it seems as though a righteous-cop film is playing.

By the door is a filthy couch covered in brown velvet. We dump our backpacks on it.

These guys know the rules of bargaining well. They size us up carefully and switch the TV off but say nothing.

‘Do you have rooms available?’ S asks. ‘We want a double room.’

The lighting, the gaze and the cold night whistling outside combine to make this an extremely sexual sentence. For a bit, everyone is quiet. ‘We have good double rooms, attached bathroom, hot water by buckets, room service,’ the portly one recites. ‘We can get you beer too.’

‘Do you want to see one of the rooms upstairs?’ the other asks.

We know this’ll have to do; there is no real choice unless we want to return to the previous hotel with the paan-stained/bloodstained toilets, but it is good form to pretend we want to see the room before negotiating rates. So we nod. He adds helpfully, ‘Don’t worry. You can leave your bags here.’

We leave the bags there, not without misgivings. The portly chap, Rajinder, jangles a bunch of keys, small-talks politely, and leads the way into a dim corridor, then to a narrow mosaic stairway with an iron railing on one side. I realize that though the facade is narrow, the building is quite deep inside.

Rooms on the first floor open directly into the foyer. With the doors and windows open, one can see small dismal squares lit under 50-watt CFLs. The occupants of these rooms have spilled onto the landing. They look up as we pass. It is a large party of young men in colourful shirts and white trousers, hair slicked back, chunky watches on wrists. They are milling about the corridor, sitting on the bed, chewing chicken legs, humming loudly in the next room and talking on cell-phones; they seem to multiply before my eyes. There is a girl in a crimson salwar-kameez, tinkling jewellery, golden butterfly clips in her hair, standing outside the first room and talking to one of the white trousers earnestly. Another girl emerges from one of the other rooms, her hair tied in a topknot, her baby-pink salwar-kameez dotted with hundreds of glittery silver sequins. She interrupts the couple urgently, her high-heels clip-clopping. I am transfixed. S returns, and hustles me upstairs.

‘We want a quiet room,’ he tells Rajinder gruffly.

Rajinder reflects for a moment or two on our demand. He says, ‘There is a quiet room in the corner, nice room, Western-style toilet, but it has only just been vacated. You can have it. But it will have to be cleaned first. Why don’t you take a look?’

The room just vacated has seen better days. It is tucked away at the end of a long thin corridor and smells musty. A maroon carpet covers the entire floor, a patina of dust on it. The walls are a tube-lit green.

While S peeks into the bathroom with its cobwebbed but tiled corners and grimy sink, I gingerly push the polyester curtains open.

The window is surprisingly beautiful. It is latticed in the traditional style – leading to a dirty slab in front. But still, it is something. One sign of beauty. A good omen.

‘Let’s take this one,’ I tell S, while Rajinder tries to discreetly remove empty bottles of Haywards from under the bed.

‘How much?’ he asks Rajinder.

‘The reception will tell you that, sir,’ Rajinder replies. ‘I’ll get the room cleaned.’

‘Please change the sheets,’ I beg. ‘And the blankets.’

On the way to the reception, we see the white-trousered party who are still milling around, talking on cell-phones, humming loudly and indulging in intrigue with the girls. S smirks. ‘Whose idea was this journey again?’

Down in the reception, there is fierce bargaining.

‘Jaipur is dusty city, madam,’ the reedy fellow replies in English. ‘We have power back-up. Other hotels here don’t. Any food you want – Chinese, Indian, Italian, Thai – we serve in your room.’ He waves a dog-eared menu in my face.

The guys look glum but do not attempt to stop us.

I glower at him. He has given in way too easily.

The reedy guy opens the register. He asks, ‘You have ID proof?’ S nods and hands him his driving licence. I offer my PAN card. ‘After David Headley was caught in a hotel in Pushkar, we are now very strict. Government instructions: no ID, no room. That’s the new policy.’ He carefully notes down the numbers.

‘What relation are you to each other?’ he now asks. ‘Friends?’

As S pays, Rajinder returns and hands me the keys.

I wake up to the feel of rain in my bones. I cough and stir. There is dust in my throat. The chinks of light filtering in through the window remind me where I am: Veer Rajput Palace. At that I come round fully. I have not slept well. But that is nothing new. I stretch my arms and reach for my jacket. Distinctly odd, but it seems the dust on the carpet has somehow managed to rise upwards in the night, leaving dots on the sheets. I look around for a bottle of water.

Walking to the window, I push it open. A wet breeze drifts in. It is drizzling outside.

Our room is at the back of the building. It overlooks a block of modest houses with flat roofs. A short way across, through one or two trees glistening in the rain, one can see evidence of construction work. Several houses sport brown sackcloth hung from scaffoldings and a general collection of oddments: bricks, bamboos, cans of cement. New floors are being added, perhaps to rent out more rooms by the hour.

Very close by, though I cannot see it, stretch the saffron-pink walls of the old city, capital of Dhundhar. 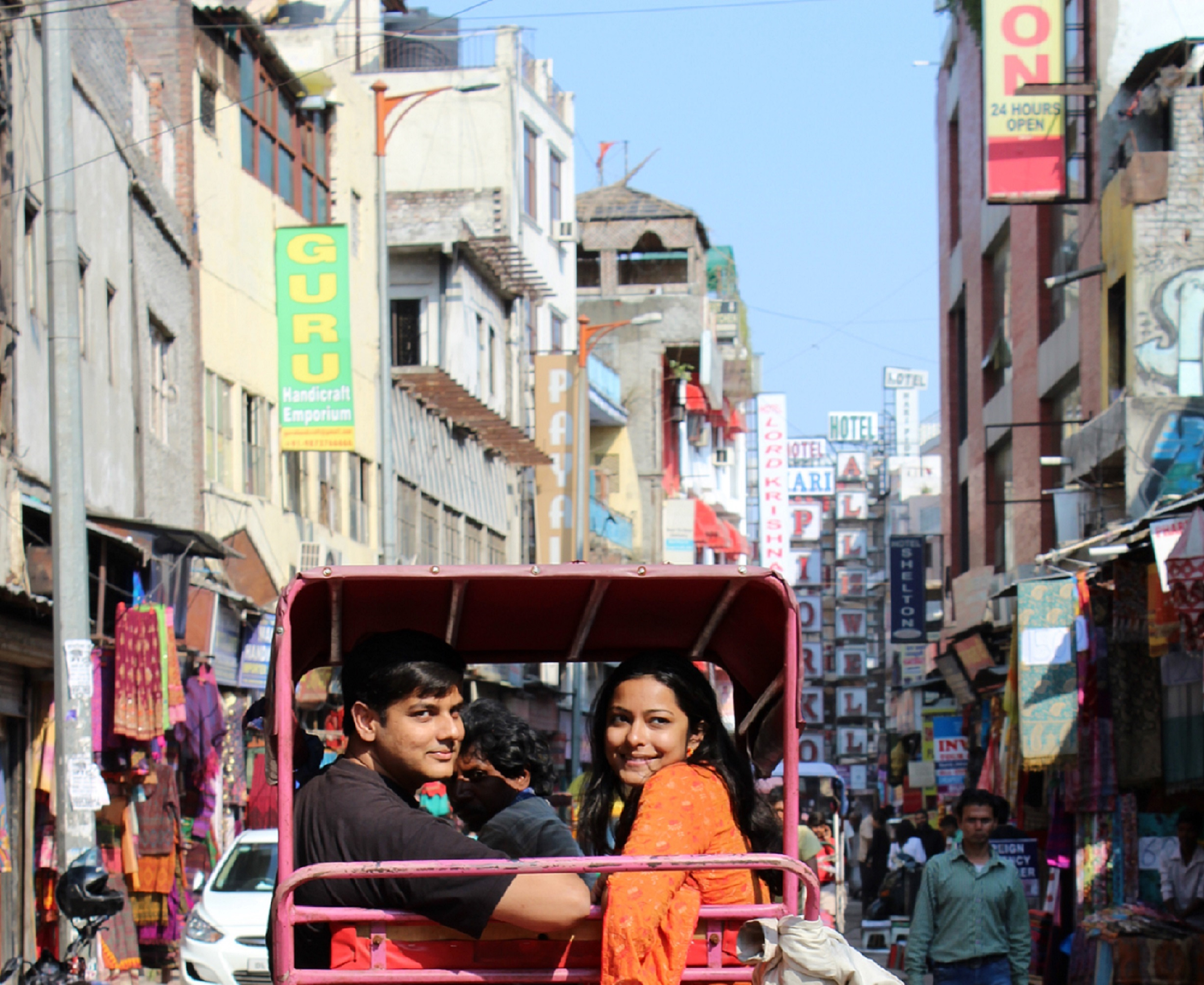 Finding a room in Palanpur

The Gujarati traders had not been lying. The edge of Palanpur, where we find ourselves after alighting from the bus, boasts a row of hotels by the highway. In the dark, their names glitter above steel- and-glass frontage, and inside, dim yellow bulbs cast moony shadows on highly polished floors. Within minutes, our bus is gone and as we wear the bags, we suddenly feel cold and exposed in the consistent ebb and flow of traffic. We troop into one of these hotels. I cannot, for the life of me, remember its name. But I do remember one thing – it is manically clean. The reception is polite: if we require room service, would we, kindly, let them know soonest? The kitchen closes at eleven. Since there are hardly any options at this hour, we say we will check out the menu in the room and order something.

The room on the second floor, for 350 rupees, has an abundance of sunmica on every surface. The bed, a table opposite, the wardrobe on the right, all bear that white clapboard appearance with a brown pattern of leaves and vines round corners. There is a flat-screen TV on the wall. I fling down my bag and rush to the loo. I’ve been dying to go for hours.

The bathroom is tiny but clean. As I splash water on my face, I catch sight of myself in the mirror and suddenly remember something. ‘Do you think Goradia was right?’ I ask, emerging from the bathroom in a hurry, water dripping down my neck and wetting the rim of my t-shirt.

‘About what?’ S asks. He has already switched the laptop on.

I blunder about a bit and eventually find a fluffy white towel neatly folded inside the wardrobe. ‘In that case, why are you so remarkably casual about it?’

‘Look, when the duffer said if we were a couple, what he really meant was, are you planning to have sex tonight?’

‘Humph,’ I say, rooting through my bag for clothes. ‘As though that’s all couples do in hotel rooms.’

           ‘Especially couples who have been married for years and years and are averaging 200 kilometres a day in filthy buses.’ He grins.

‘Quite the romantic setting,’ I submit, though I do not like the allusion to years and years. It sours my mood in some ways. For I have vowed to never allow us to become an old married couple – but S is never bothered by such subtleties – it’s as though he doesn’t even mind being an old married couple. I shudder involuntarily. ‘But then, Goradia doesn’t know the exact details of the filth and exhaustion of this journey. Maybe he thought we were eloping?’ That’s one of my long-standing regrets; that we never eloped. Sigh. ‘So you reckon, then, that as long as we crash out, give ourselves over to oblivion and not cultivate sin and base lustfulness, camera or no camera, we’re fine?’

‘Shut up and order room service.’ I settle into the bed – damn, it’s cosy. ‘I am starving.’

‘You are starving? I could eat this motel.’

I cannot remember what side dish we ordered – but it was cheap, vegetarian, and arrived quickly – but I do know the fried rice that came in a white plastic bowl was delicious and plentiful, dotted with peas and scrambled eggs and slivers of beans and carrots. We chomp in perfect silence and after weeks, give in to the TV. I overshoot the budget by twenty rupees when I refuse to submit to S’s diktats and order a coke just before the kitchen closes.

Published with permission from The Heat and Dust Project: The Broke Couple’s Guide to Bharat, Devapriya Roy and Saurav Jha, HarperCollins India.

What makes the ‘Hitopadesha’ a timeless text on human behaviour? It is its playful language