Contribute Now
Ad
Bollywood and the breathless defenders of Indian culture would have us believe that India is one of those few societies where the young respect their elders and families live in harmony. The reality couldn’t be further from the claims. Even as half the elderly population in the nation reported facing some form of abuse in a new survey by HelpAge India across 20 cities, one in three young people professed they would probably do nothing about it.

Released on World Elderly Abuse Awareness Day on Monday, the survey report highlights stark differences in how elderly abuse is perceived by the abusers and the abused. Almost 73% of those aged between 25-45 years living with their parents conceded the existence of elderly abuse. Yet, only two in three of them said they would take some action if they see it happening. 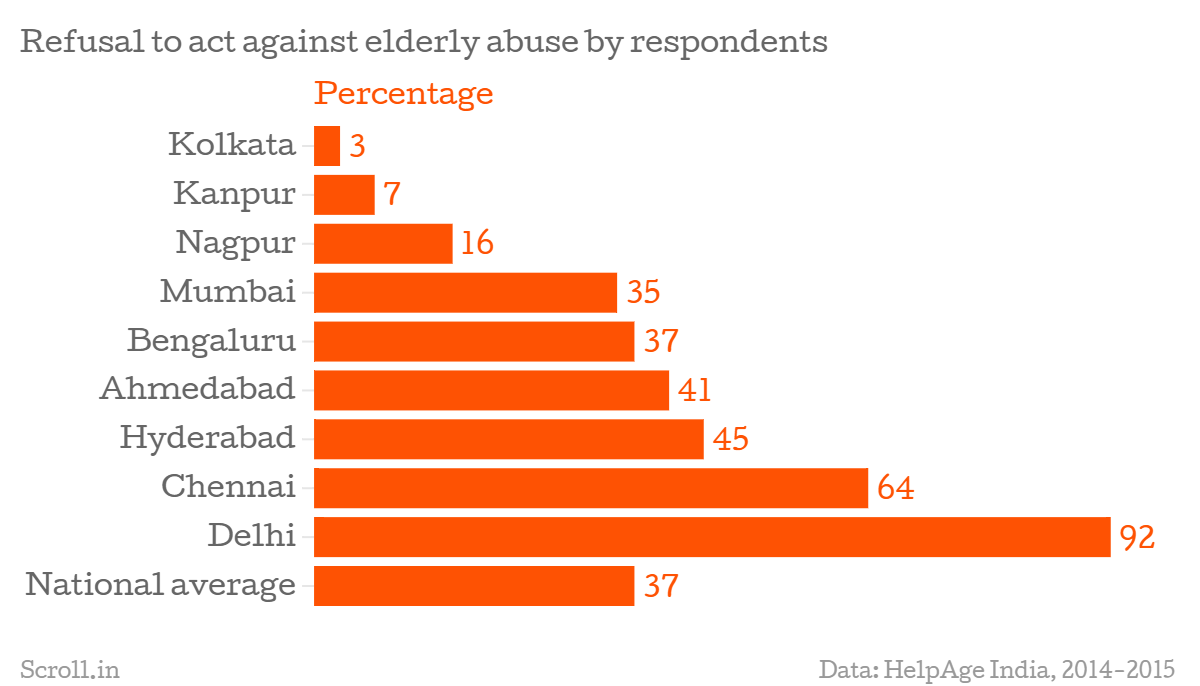 These figures showed major variations across cities. Two of three people in Chennai said they would be unlikely to act against instances of elderly abuse, while 92% of respondents in Delhi said the same. In contrast, the figure in Kanpur was 7% and in Kolkata as low as 3%.

Across the country, 37% of the youth preferred to stay passive in the face of elderly abuse, while more than half the respondents said they would take some action. Divided by gender, 40% of women said they would not act to defend the old, as compared to 29% of men.

Even those respondents who replied in affirmative about wanting to stop incidents of elderly abuse didn’t show enthusiasm about seeking legal recourse or reaching out organisations working in this space. Maybe not willing to let family matters become public, respondents leaned towards behavioural solutions instead of legal ones.

While 41% said they would speak to the abusers and ask them to change their behaviour, only 4% said they would report the case to the police and a meagre 1% wanted to seek help from an NGO. Meanwhile, 32.4% felt they won’t be able to do anything and another 5% were not sure how they would react.

Abuser within the house

In a previous survey, HelpAge India had highlighted how daughters-in-law were perceived to be the most common abusers by the elderly, with sons coming in second.

The new survey conducted among the youth agreed with that conclusion. Men and women in almost proportion felt daughters-in-law to be among the principal abusers.

The methodology allowed multiple choices as answers, and therefore the total of percentages is more than 100% in some places.

However, there was dissonance between the perceptions of frequency of abuse. While in the earlier survey, the elderly indicated that daughters-in-law were responsible for 61% of the abuse cases, the young people in the new survey put this figure at 50.2%.

Young people surveyed by HelpAge India were also asked about the reasons for the abuse of the elderly. Their top three choices were revealing.

Almost half of the respondents said it was due to “greed and desire to inherit property”, while another 38.2% said the abuse occurred due to stress and urban lifestyle patterns. Still another 22% said it was because of “lack of understanding of concerns” of young people by the elderly.

When asked for ideas on reducing such cases, more than 31% said families need to spend more time with their elders, while another 29% said that families need to give due importance to the opinion of the elders. Only 11.6% said that the elders’ financial and material needs must be taken off before the abuse can be stopped.