The Indian Institutes of Technology with their almost ten thousand seats carry the burden of producing quality engineers for the nation of over one billion. However, expectations from the IITs do not just end there as they are charged with carrying forth the torch of research and cutting edge innovation all the while balancing placements and entrepreneurship on the campuses—among other things. Difficult as it might sound to manage, it is the reputation that these institutions of excellence have earned over the years.

Lately, however, there have been too many fingers pointing at the state of research in India and keen observers from around the world, not in the least popular science magazine Nature have wondered why the country has only about 20 researchers for every 10,000 labour force even though its spending on research is almost equivalent to counterparts such as China.

The anxiety is palpable as students in research worry about their prospects and those outside of it worry about the students and this worry about the sufficiency of our existing institutions in providing with research prowess permeated even to an Ask Me Anything interaction on the sharing website reddit’s India forum which featured Professor Urjit Yagnik, former Dean of Student Affairs at IIT-Bombay.

While the question and answer discussion format on the site has hosted many serious discussions in the past, this one turned out to be a healthy mixture of a fun and sincere conversation between netizens of India and the DoSA who seemed only too happy to address these concerns. 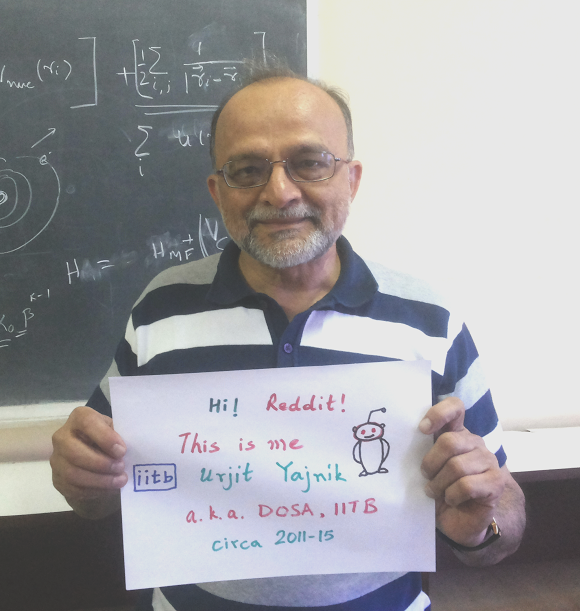 One of the foremost queries relating to the affairs at the IITs was from bajrangibaiman who claimed to be a student from another IIT and asked about the “complacency and general lack of passion” that the user observed in IITs and asked if there’s something that can be done about it in the following words:

“Man we don't do cutting edge shit. We don't feel cutting edge. I mean, we don't feel like we are doing anything. By the end of the first year or second year for the optimistic ones, people just realize that they ought to go through the grind and get a job. I would reiterate that there are people who stay with it, and persevere, but it's a low percentage. Just like any other college. Thats kinda sad. So what can we do? How do we change this? IITs anyway don't have a lot of money. I compare notes with my friends in the US, and (by jove!) they have a different world.”

To this, professor had a clear answer that the IITs are putting out a “product” of superior quality in the market and there are insufficient number of challenging jobs in the market.

"Yes, the new IITs may have some challenges, but I would not expect the one about enthu. As we see it the competence of general students entering the new IITs is not too different from the median at old IITs with large groups.

The apathy factor is somewhat universal at present but I am sure varies somewhat from one IIT to another. The main reason is that we as all the IITs, are putting out “product” of far higher quality and in larger numbers than our industry can accept and can offer sufficient number of challenging jobs to. This rubs off further on the system as well, on the kind of teaching that goes on etc., which then remains more academic —> I hope this is what you meant by how the scene abroad is different.

I think as the industry in India pick up towards coming up with innovative product and fine tuning them leveraging technology, that is the only scenario in which the larger scene can change. Many other initiatives are possible but they will be of impact only for what they are aimed for."

This, however did get opposition from users such as littlelakebigboat who argued that they saw some interns from IIT-B and weren’t sure about the “quality of the product” anymore.

“After three years in a premier institute of technology, the level of engineering aptitude shown by them is really sad,” he said adding an appeal to “do something about the curriculum.”

Another user had a more direct query on the professor’s thoughts about the “dismal research” output from premier universities and institutions such as the IITs.

“Am really glad to see someone in acads doing an ama here. I will Try to be as concise as possible with my questions. Also this is first time I am typing out questions for a faculty to answer and not the other way around.

What are your thoughts on dismal research output from Indian universities and institutes like IITs?

What can we or the government do to stop the immense brain drain to developed countries? Even those who pursue a career in research opt to do it in US and Europe rather than India? Is it solely because of lack of infra and funding or has it got something more to it?

Lastly, even among Indian institutes, why do IITs take a back seat when it comes to research on theoretical physics compared to tifr or iisc?”

“Our science culture as a whole is operating far below critical. Just check the number of trained scientists in a typical lab or institute in the developed world. Even the number of labs in a given city there like Munich or Paris or Boston. The presence of the atmosphere and the infrastructure is half the success as we know because foreigners going there also shine.

Is it solely because of lack of infra and funding or has it got something more to it?

Both of the above, but more deeply the lack of a scientific culture. Europe has had a 500 year history since the renaissance, where generations within a family pursued scientific inquiry. Society had enough surplus and enough interest to not only spare quite a few bright individuals full time for exploring scientific questions, but enough money to fund them and their investigations. Such funding in India has been very rare, though with notable exceptions.

Then, he discussed the nature of IITs as compared to other institutions and how the mandate of training undergraduate engineers makes it difficult to make research more exploratory or even prominent.

"The IITs were set up as UG teaching institutions though for the more talented engineering student. Research emerged as their mandate much later, only in the 1990's. And in sciences there, research began by default than by any planning. TIFR was founded by a theoretical physicist with a clear mandate to do research with in house funding and full time for research. IISc had only PG teaching until recently and a lot of funding. In IITs only about 50% time is permitted for research. Finally experimental research in India suffers due to a large number of reasons, even at the research institutes compared to the rest of the world. And theory cannot happen in isolation for long.

He further went on to caution against writing off research in India as "dismal" by claiming that it forms a crucial part of the pyramid whose peak is the only thing that makes the news.

"Finally before you write off Indian effort as "dismal" you should know that you only hear the pinnacles of success from the West. It is a huge pyramid with a large number of "dismal" efforts, but which in small measures keep contributing to the top layer. Considering science is global, you can say we are somewhere in that pyramid -- our results also get incorporated in larger efforts there -- and yes we are consistently trying to rise up within it.”

Meanwhile, Volis asked about the “plague of academic dishonesty” in Indian institutions quoting a transplant surgeon Christopher Barry who had written that “it's not that Indians have an intolerance for honesty, but they do have an alarming tolerance for dishonesty.” The user asked the professor about the possible reasons behind it and how does IIT B deal with it?

To this professor responded with his theory on the corruption widespread in the society and that IITs only reflect a part of the universe.

“The reasons are there to see in the society .. you read the news? There is a saying that the tap can only send out what is in the pot. The culture of honesty is very weak in our country, though not as weak as you might lament about.

Within IIT the situation is similar. In my opinion something that originates outside of IIT’s boundary conditions is not ours to “fix”. We can only act as encouraging the better tendencies, create enthusiasm for the subject among students, create challenge in answering the question or finding the solution on ones own, which is the best incentive to make people move away from copying. One of my senior colleagues who taught Quantum Mechanics successfully gave take home exams. I also tried it successfully this semester seeing how enthu the class was.”

He went on to explain his own approach to deal with it which involved allowing students to carry hand-written chits in examinations:

“But to the extent the grades in most courses are gamed, seen as the number to fatten up CPI etc, not much can be done. Here my own approach is pragmatic. Do not give any assessment that can permit copying.

And I invigilate all exams personally along with a team, moving continuously through the class to ensure nobody copies. The idea again is to send out a clear message “ this practice is not acceptable here”. And I am sure such a presence by professor himself or herself has a salutory effect.

I also allow students to carry a cheat sheet ( hand written by themselves, not a photocopy) legally to exam and tune my questions to concepts rather than memory of the formulae. This reduces anxiety in students and allows me to test what really needs to be tested.”

In Pictures: #OccupyUGC protests against scrapping of fellowships for PhD and MPhil students