Become a Member
Ad
In a country quite as large as India, it's hard to identify anything that actually counts as being in the "middle." Yet most of us claim we are middle-class, no matter where we fall on the spectrum, whether compared to the rest of India or the globe. As far as the Pew Research Center is concerned, all those stories about India's burgeoning middle-class have little to do with reality: India is, as it has always been, woefully poor.

A Pew Research Center study looking into the break-up of income levels across the world released last week offers a wake-up call for those familiar with headlines in the English press touting the promises of India's massive middle-class. The study, which looked at changes in income levels across the world's population, points out that the first decade of the 2000s saw a dramatic, historic reduction in global poverty. Yet, despite this, the actual number of people who could be considered middle-income remained under 15%.

The study divided the population in each country into five groups based on a family's daily per-capita consumption or income. The thresholds are based on various things, with $2 being the daily per capita income level under which people are globally considered poor, and $2-$10 fitting people in under the low-income category. As per this measure, the middle-class falls into those who earn between $10 and $20 a day. (As a reminder of how low this still is, the study reminds us that the poverty line in the United States, comes in at around $16 – on the upper end of what this report considers middle income).

A look at India's break-up, based on these parameters, would leave you asking where that celebrated middle-class actually is. 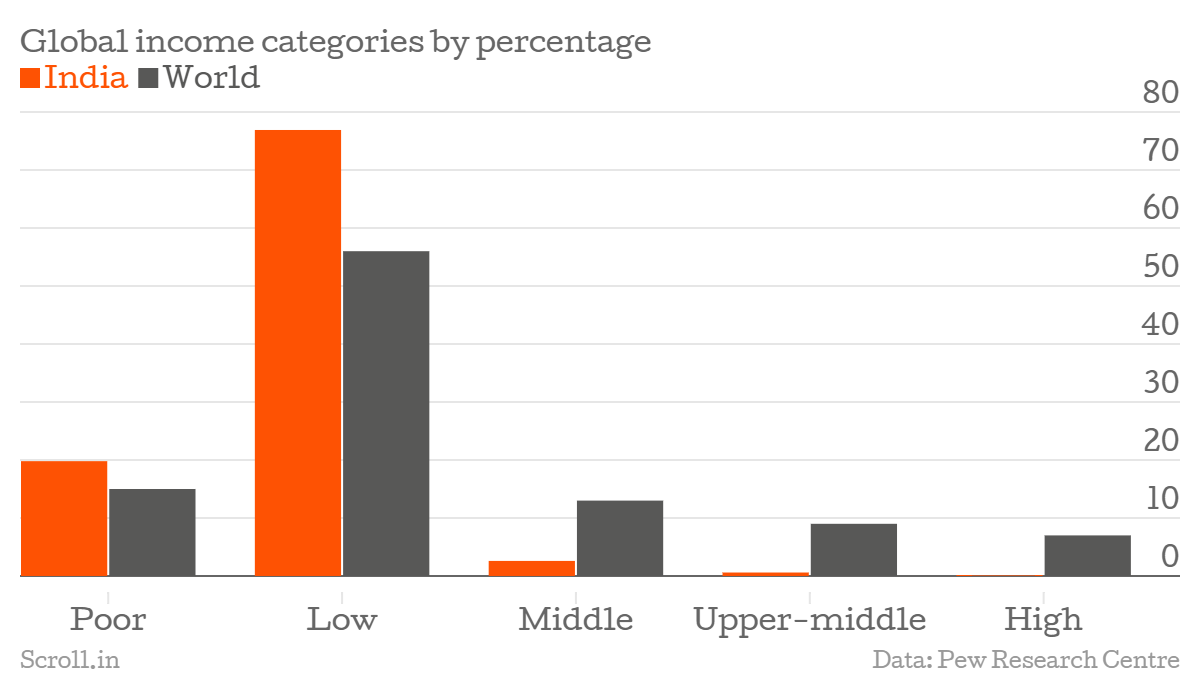 Up to 95% of India still qualifies as poor or low-income, the vast majority of India's 1.2 billion citizens. For the globe, the equivalent proportion is 71%. As far as middle-income Indians go, only 2% of the country actually falls into this zone, compared to 13% of the globe, which is itself a disappointing number.

"Although the poverty rate in India fell from 35% in 2001 to 20% in 2011, the share of the Indian population that could be considered middle income increased from 1% to just 3%," the report said. "Instead of a burgeoning middle class, India’s ranks of low-income earners swelled. Many of these were people hovering closer to $2 than $10 in daily income, and thus still a way from the transition to middle-income status."

As the graph shows, most of the Indians who left the poor category travelled into the low-income zone, but the mobility into higher classes proved to be much smaller. Indians are clearly some way away from achieving higher standards for the vast majority of the population, and have been completely eclipsed by its northern neighbour China, which saw its middle-income proportion go up from 3% in 2001 to 18% in 2011.

What makes it slightly more ironic is the share of Indians who call themselves middle class. Middle income and middle class aren't the same thing, of course, but one would expect a fair amount of overlap between the two categories. Yet research done by Devesh Kapur and Milan Vaishnav based on a multi-year panel survey by the Centre for Advanced Study of India suggests that about half the Indians in practically any bracket – urban, rural, lowest-income, highest-income – all self-identify as middle class.

The Pew Research Study points out the essential problem with having such a broad definition for middle-class. Although we keep hearing about India's massive middle class, probably because so many Indians think they fall into the category, the reality is that only a tiny amount of Indians qualify to be in a very conservative middle-income category, and the gap in living standards between economically advanced nations and developing ones is not narrowing.

"The first decade of this century witnessed an historic reduction in global poverty and a near doubling of the number of people who could be considered middle income. But the emergence of a truly global middle class is still more promise than reality," the report said.