Contribute Now
Ad
* 75% of rural households in India have a monthly income of less than Rs 5,000 ($79)
* 51% of households make a living from manual labour
* 28% (over 50 million) of households do not have mobile phones or any form of communication

More than 70 million rural households face some form of exclusion, either from assets or socio-economic benefits, according to data released by the Socio-Economic Caste Census survey last week. As many as 833 million Indians, or 69% of the population, live in rural areas.

The SECC report comes at a time when global credit rating agencies, such as Moody’s, have warned that slow growth in rural India may cripple the overall economy. Rating agencies have laid stress on speeding rural reforms. IndiaSpend has previously discussed reforming agriculture and rural administration.

Rural Poor and Sources of Income

More than half of rural households depend on manual labour for livelihood, and 75% of the rural population, or 133.5 million families, earn less than Rs 5,000 per month. 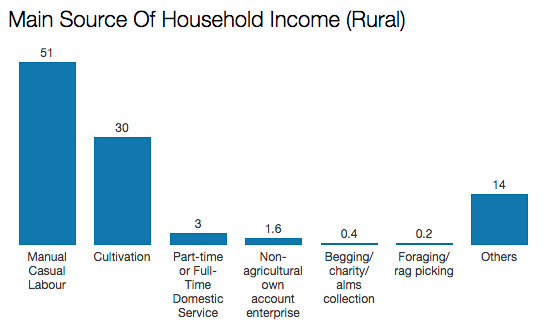 “A preliminary analysis reveals a grim picture of rural areas with three in four rural households earning less than Rs 5,000 per month and almost 90% of households having incomes of less than Rs 10,000 per month,” Himanshu (he uses only one name), an agricultural economist with Delhi’s Jawaharlal Nehru University wrote in Mint, citing the findings of the Arjun Sengupta committee, 2007, which identified 77% of India’s population as poor.

“Overlooked by the media, these numbers are very close to the estimates of poor and vulnerable derived from other estimates based on the consumption surveys of the National Sample Survey Office. Rs 5,000 per month per household with an average household size of five would also mean an income of Rs 33 per person per day in the rural areas,” wrote Himanshu.

Although it is not meant to be a comparison of poverty estimates, the SECC data reveals that about 670 million Indians in rural areas alone live on Rs 33 per day (75% of rural households is around 134,373,569 households; five members per household gives us a total of 671,867,845 people). 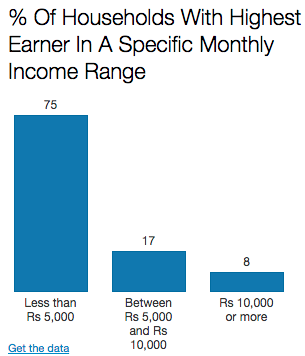 A little less than half of the houses in rural India are kuccha (not solid). 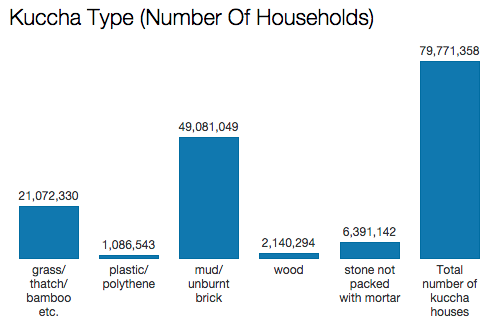 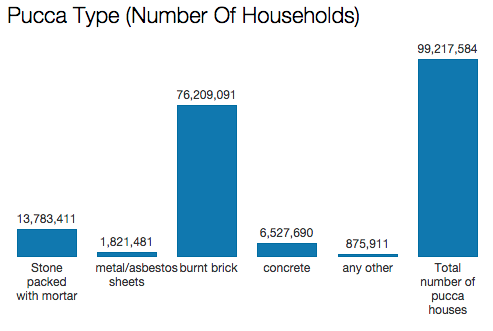 Having a pucca (permanent) house is an indicator of a higher standard of living. 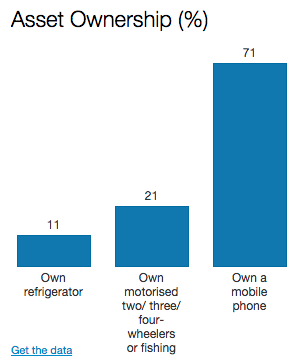 Poverty and a low standard of living are reflected in asset ownership.  While 71% of village households have mobile phones, refrigerators and motor vehicles are not very common in rural households.

IndiaSpend recently reported how rural India has more illiterate people than the population of Indonesia. With 74% of families living on less than Rs 5,000 a month, this will not change immediately, which in turn will keep economic standards depressed, as we have explained in a previous report. 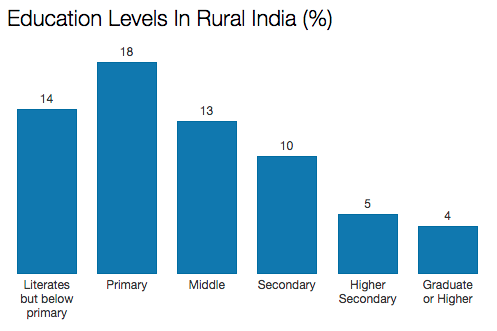 Rural India continues to be trapped in a vicious circle of poverty.  A clue to the first step to break out of that cycle comes from what is called the graduation model, a global experiment that could become an anti-poverty guide for Prime Minister Narendra Modi.