Contribute Now
Ad
Net neutrality is back. The important, complex principle that dominated headlines a few months ago in India is back in the news, as the government continues to figure out how exactly the internet should be governed. Following the telecom regulator's consultation paper in the matter, which many felt was biased against the principle of neutrality, the Department of Telecom has now put out its committee report on the issue – giving us the first glimpse of language that will guide the government as it seeks to frame a proper internet policy for India.

And there's a surprising, slightly low-tech star to the report: the Buddha.

Net neutrality is the idea that all traffic on the internet should be treated the same. (If that means nothing to you, go read this or this). There are good reasons to be opposed to neutrality, but by and large the principle exists to ensure that your ability to access the vast expanse of the web will not be controlled by your internet service provider. Those providers however argue that without being able to charge differently for different kinds of internet usage, they won't be able to get the revenues to build more infrastructure and expand access to the internet.

It's a complicated issue, one that is not easy to fully understand. So the telecom department committee that was tasked with looking over the issue decided to fall back on even more longstanding principles as a way to guide them on what to do.

"At the root of our discourse is the recognition that we have different stakeholders with different perspective and sometimes diametrically opposite views and prescriptions," the report said. "This Committee has tried to assimilate these vastly differing opinions and objectives and arrive at its recommendations. On the Net Neutrality continuum, the Committee has sought to carve its own path in comparison to international responses. India is the land of Buddha who preached the Middle Path."

Breaking that analogy down even further, the committee examined the question of net neutrality through the various facets of the Buddha's eight-fold approach on the Middle Path, with things like "Right Speech – No throttling or blocking of the lawful content on the net," and "Right Efforts – Leave infrastructure development and application or content development to those who are best capable of doing it."

"In order to follow this Middle Path, in order to explore the best possible options to create a virtuous cycle, we must embrace change and move forward and towards Dharma i.e. maintaining transparency, neutrality, privacy, security and the democratic fabric of the Internet," the report said.

The report's conclusions, which will then be considered by the Department of Telecom itself, are summarised below:

*Neutrality: The committee "unhesitatingly" adheres to the "core principles" of net neutrality, and has set up an 15-point test to check whether services conform to these principles, which you can see here.
*Objectives of policy: Principles, it is important to remember, don't exist for the market but for improving the lives of the Indian citizens. On that note, the DoT concludes that the objectives of any neutrality policy are to facilitate "affordable broadband, quality broadband and universal broadband" for citizens.
*Over The Top Apps: OTT apps, essentially any program usually on a phone that use data to do something that might have been done through telephony or other means previously, were one of the big questions of the TRAI consultation paper. Telecom companies were concerned that messaging apps and voice ones, like Skype, would cut into their revenues. The DoT report says instead of regulating them, they should be encouraged and all impediments to their growth should be removed.
*Voice over Internet Protocol apps: With VoIP services like Viber and Skype, the DoT response is a little more specific. It recommends a "liberal" approach to international telephony services, but for national and local ones, it recommends the government treat them the same as  Telephone Service Provider products, such as those offered by Airtel or Vodafone. This means that OTT apps that use voice calling locally would have to go by the same rules as mobile network companies.
*Traffic management: Can internet service providers decide what loads slower or faster? Whether to charge more for different kinds of usage? Adjust speeds based on congestion? The DoT report says that "legitimate" traffic management should be permitted, as long as it conforms to the principles of neutrality outlined here, i.e. it can't be specific to an app or a device, and has to be transparent. This means that the committee has not entirely endorsed absolutely neutrality, but stuck to its overarching principles.
*Zero rating: The effective meaning of the above point is that zero-rating plans, where companies like Airtel can offer some version of a walled-off internet to you for free, potentially distorting the market, could be allowed but only if it clears the DoT test. Nikhil Pahwa of Medianama has expressed concerns that this discretion could allow the government to favour certain providers.
*Legalities: The report recommends a clause be added to existing licensing norms that would require companies to adhere to neutrality, and prescribe a punishment if violation is detected. It also recommends a separate cell within the DoT to oversee this.
*Security: To quote from the report: "National security is paramount, regardless of treatment of net neutrality. The measures to ensure compliance of security related requirements from OTT service providers, need to be worked out through inter-ministerial consultations."

Below are the DoT's general guidelines on neutrality. 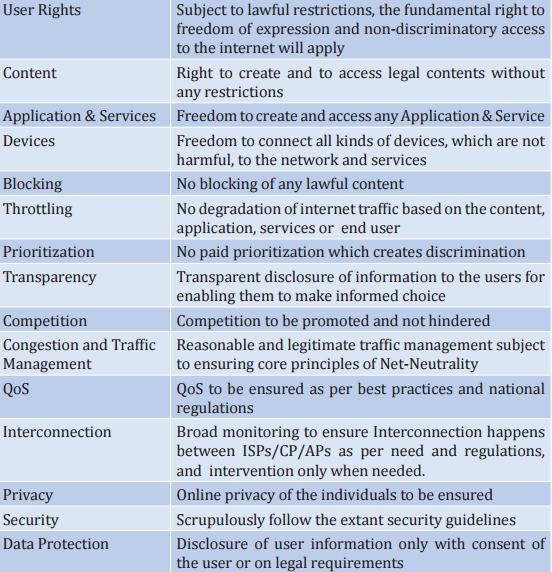