David Cameron has attacked British universities for failing to tackle extremism on their campuses. In a speech setting out a five-year plan to counter extreme views, the UK prime minister accused university leaders of “looking the other way” when Islamist extremists speak on campus. This, he said was “through a mixture of misguided liberalism and cultural sensitivity”.

For many people, this message is clear – Britain welcomes diverse opinions and viewpoints within certain “bounds of acceptability.” If you want to have a debate over the role of religion and civil society, that’s perfectly acceptable, but host a speaker with beliefs in line with what the government considers an unacceptable version of Islamic thought and you are out of bounds.

Arguments against free speech absolutism often rely on examples where public opinion clearly opposes a speaker or group (such as Nazis or those espousing extremist views in the name of Islam) and this is what makes the bounds-of-acceptability arguments fronted by Cameron so dangerous.

The right to free speech exists precisely to protect whatever speech the majority finds abhorrent and so is inclined to censor. Many of the ideas that led to substantial moral progress in history emerged out of viewpoints that swam against the currents of public opinion. And as John Stuart Mill famously noted, even odious ideas can lead to progress, as we sharpen our understanding of the truth by observing its “collision with error” in public debate.

The crucial problem with bounds-of-acceptability restrictions on free speech is that different sub-groups draw the lines differently. The British public, writ large, may wish to curtail discussions of the more radical views espoused by a minority of those who identify as Muslim – but some students on university campuses have different expectations. They are more likely to demand the removal of credentialed ambassadors of the State of Israel, for example.

The disparity between what the British public wants and the demands made by students on university campuses (or any other sub-group for that matter) is not surprising because, in the absence of a constitutional backdrop giving firm legal standing to free speech – such as exists in the US – people will become highly situational in their preferences.

Where does the public draw the line?

In April 2015, my colleague Jason Reifler and I posed ten hypothetical speakers to a representative sample of the British public. We asked whether they should be allowed to speak on British university campuses, often held to be ideal “marketplaces of ideas”.

Results presented in the table show that the public is decidedly mixed on allowing speakers from groups such as the far-right English Defence League or those espousing sharia law on campus. They are more supportive of allowing a source of much controversy to students – a representative of Israel or a climate change denier – to speak.

Recently, British universities and student unions have been criticised for either allowing or attempting to ban certain individuals, groups and organisations from speaking in their venues. Should the following be allowed to speak on university campuses? 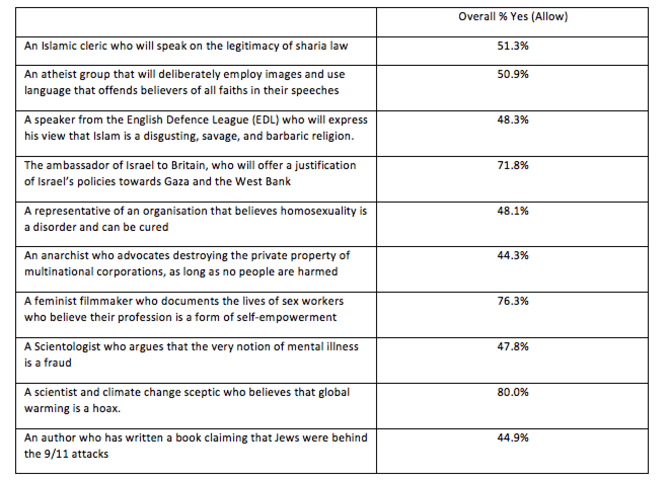 Who should have freedom of speech? Thomas Scotto, Author provided

A closer analysis of results show that few (only 7.7%) want to ban all speakers, while a larger proportion – but still only a minority, 24.2% of the sample – appear to be free speech purists and want all views to be heard on campuses. The majority deem only some speakers to be appropriate. Some respondents want to ban most, but not all, speakers. A smaller group of about one in five of those in the sample is happy with allowing nearly all speakers – but they too have their limitations.

Upon detailed inspection of the data, a most interesting finding is that those who wish to ban some but not all speakers differ widely on which to ban. For example, some are perfectly fine with speakers who deny climate change or argue that homosexuality can be cured, and will listen to beliefs about sharia law from an Islamic cleric but, at the same time, want the EDL and the atheist group banned.

Others are comfortable allowing the EDL and 9/11 conspiracy theorists on campus but are ill at ease with the Islamic cleric. In other words, the public has varied and often contradictory conceptions about the bounds of acceptability for free speech on British university campuses.

These results suggest that calls to ban speakers, and to monitor allegedly hateful and extremist speech, will always be situational. The content of these demands will shift based on the preferences of those in power.

Cameron and the home secretary, Theresa May, are trying to define the boundaries of free speech in the UK. They are not the first to do so, but they are taking the country down a decidedly illiberal road. If bounds of acceptability can be moved so easily, different sub-groups will start making demands that free speech protections be narrowed. And as we have seen, different groups deem speakers and ideas of different stripes as unacceptable so the circle of permissible debate in the UK may close very rapidly.

As long as we permit majorities to curtail speech they dislike – be they majorities in Westminster, or student governments or management teams on university campuses – liberty will remain insecure. Only the legal entrenchment of a capacious right to free speech would avoid these shifting sands and guarantee genuine free speech for all.