Contribute Now
Ad
Indians may not seem to take climate change seriously. We're more concerned about getting power to our houses than saving it, we're not exactly in any mood to shut down our coal plants and our prime minister has insisted that it isn't the climate that has changed but the people. But that doesn't mean Indians aren't worried about climate change. A Pew Global Research Centre survey finds climate change is considered the biggest threat the world over, including India where nearly three-fourths of those surveyed considered it the top concern.

The survey, conducted in 40 countries took in views of more than 45,000 respondents while attempting to measure global threat perception of various issues and climate change emerged as the clear winner. Out of the 40 countries polled, 19 ranked climate change as their top concern.

The figure was particularly high in India, where 73% of the respondents ranked it as the top threat to the country, fifth highest figure across the world. This comes at a time when the National Democratic Alliance led government is being criticised for its rash decisions with regards to the environmental clearances and a dangerous liquidation of laws and regulations meant to protect India’s forests, wildlife and tribal rights. 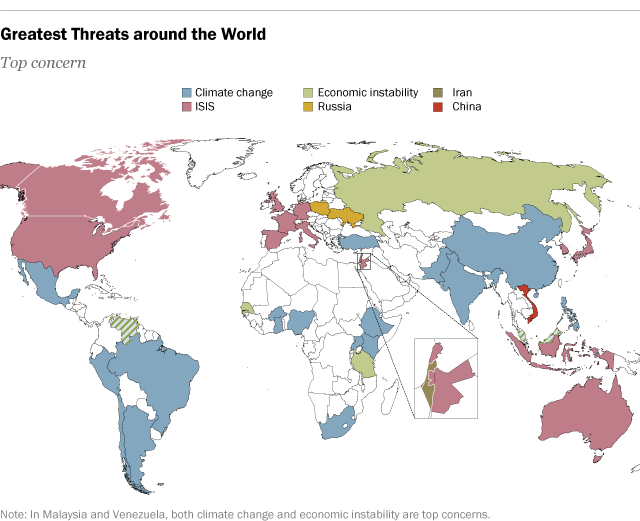 Back  home in India, voices have begun to emerge about India’s efforts not being enough to combat climate change that could worsen over time with an exploding population and continued thrust on fossil fuels to generate enough energy.  For its part, the government is raising the energy efficiency targets for firms and industries in line with the global action programme where 196 countries will announce their intended Nationally Determined Contributions by September to address climate change.

However, research conducted on the home turf has often pointed out that instances such as extreme heat waves will continue to rise. A study by a professor at the Indian Institute of Technology Gandhinagar has also warned that the temperatures could rise by six-degrees by the end of the century, if greenhouse gases emission continue at the current pace.

Meanwhile, the current government’s actions in relation to the environment have met with criticism as environmentalists worry that they could further worsen the situation.

For instance, the government has diluted the Forests Rights Act which would now only require the approval of the district administration instead of the gram sabhas’ consent for diverting the local forest lands. A strict deadline of 60 days has also been imposed to complete this process irrespective of the number of districts affected by such projects while prospecting for minerals has been completely exempted from seeking consent of the local tribals.

Even as the back and forth with climate change deals around the world continues, economic instability and China’s rise as a diplomatic power has come to dominate threat perception across countries.

In India as well, global economic instability posed a threat according to 49% people and an unusual contender in the Islamic State of Iraq and Syria concerned 41% of the respondents. More than one third of respondents were also worried about territorial disputes with China while 45% perceived cyber attacks to be an important threat.