Early Monday morning, Punjab and the rest of the country was jolted with the news of a terror attack as gunmen reportedly wearing army uniforms opened fire at a state transport bus and attacked a police station in Gurdaspur area killing at least six people and injuring over a dozen. Among the dead was also Gurdaspur Superintendent of Police Baljit Singh who succumbed to a bullet shot in the head.

The gunmen have reportedly taken full control of the police station in the ongoing incident as of 2-pm on Monday, prompting the home ministry to issue high alert warnings across all border areas along Pakistan and in major cities such as Mumbai and Pune where forces were rushed to crowded areas.

Reacting to the incident, Home Minister Rajnath Singh came out strongly against the attack and even blamed Pakistan for the incident in one breath claiming that India won’t shy away from hitting back.

"We will not be the first to strike, but if we are hit, we will give a befitting reply,” he said. “We want peace with Pakistan, but not at the cost of national honour. I can't understand why time and again cross border terror incidents are taking place when we want good relations with our neighbour.”

Even as the soldiers continued to fight the terrorists, the political ball didn’t take too long to start rolling as both the Bharatiya Janata Party and Congress fired missives at each other.

Punjab CM Prakash Singh Badal was among the first ones to react to the incident as he pushed the responsibility to the Centre.

"Wrong to say we got inputs. This is not the time for a blame game," IBN-Live quoted Akali Dal MP Chandu Majra telling the Parliament.

This, however, didn’t stop many political players from pitching in with their theories about the perpetrators of the attack. While it was still ongoing, Minister of State Jitendra Singh reportedly said that Pakistan’s intelligence agency the Inter-Services Intelligence had a role to play in the operation.

Joining him in this theory was retired Lieutenant General KS Brar who led the Indian Army's Operation Bluestar in 1984 where the Army wiped out Khalistani terrorists from the Golden Temple. Brar put the blame on the ISI claiming that it was trying to revive Khalistani terror groups in the state and said that the state government is too soft on terror groups.

"It is very disturbing to terrorists have come across the border,” he told IBN-Live. “This is unfortunate that so many terrorists came unnoticed. It is the failure of the state government. The terrorists should have been rounded up," he added.

Indian Youth Congress erupted in protests soon after in response to the attack and put forward a rather premature demand of CM Badal’s resignation.

Social media, however, had its own theories to share about the attack as an Indian-origin data scientist from Seattle claimed that the attack was an attempt at “revival” of Khalistan and obtained support from Pakistan as well as Arvind Kejriwal whose Aam Aadmi Party has four ministers in Parliament from the state.

He went on to make other allegations implicating Kejriwal as he claimed that the car involved in the attack was also spotted in the AAP rally. 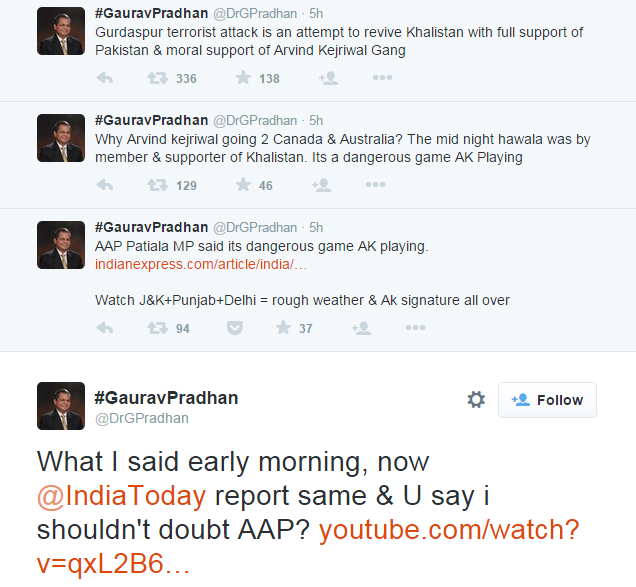 Meanwhile, Khalistan quickly started trending nationwide on Twitter prompting many others to join in.

To all those who were talking of an imaginary "khalistan revival", the gunned down terrorist was from Pak and was headed towards J&K.

Revival of khalistan or act by lashkar. Why jump the gun. Wait for the truth to come out.

In Pakistan, however, an unusual hashtag #ModiAttacksGurdaspur started trending as many bloggers, social media activists and others blamed the ruling Indian government for the attacks.

We are trending it to tell the world that Modi and company's terrorists are doing it. #ModiAttacksGurdaspur pic.twitter.com/fEd15mUkRX