Contribute Now
Ad
“This was the first suicide in Mandya district,” said Madhu, son of farmer K Rajendra who took his life on June 18. Rajendra was a sugarcane farmer in Chenenahalli village near Srirangapatna in Karnataka. He owned two acres of land on which he grew sugarcane. The commerce graduate even hedged his bets by leasing another four acres on which he cultivated bananas and vegetables and raised 40 coconut trees. But in the last few years, nothing helped alleviate the debt he was accumulating.

“This year the crop was good but we couldn’t get a good price. During the times we were getting a good price, our crop failed,” Madhu explained. Rajendra racked up a debt of Rs 12 lakh – loans he had taken from different sources to keep cultivating his land and for his family’s everyday expenses. Just the interest on the loans is close to Rs 4 lakh.

Farming is just not viable any more, Madhu bemoaned, especially with sugar prices crashing this year. In jaggery production units called aalemanes, he has been getting Rs 700 this year for one sack of sugarcane. He spends almost double the amount just to buy fertiliser for the same amount of sugarcane crop. The produce from his coconut trees cover only part of the interest he is trying to pay off. The cost of a crate of tomatoes doesn’t even cover the labour cost of producing them. His bananas sold for meagre Rs 5 per kg in the summer. His crop of beans got diseased and had to be written off. 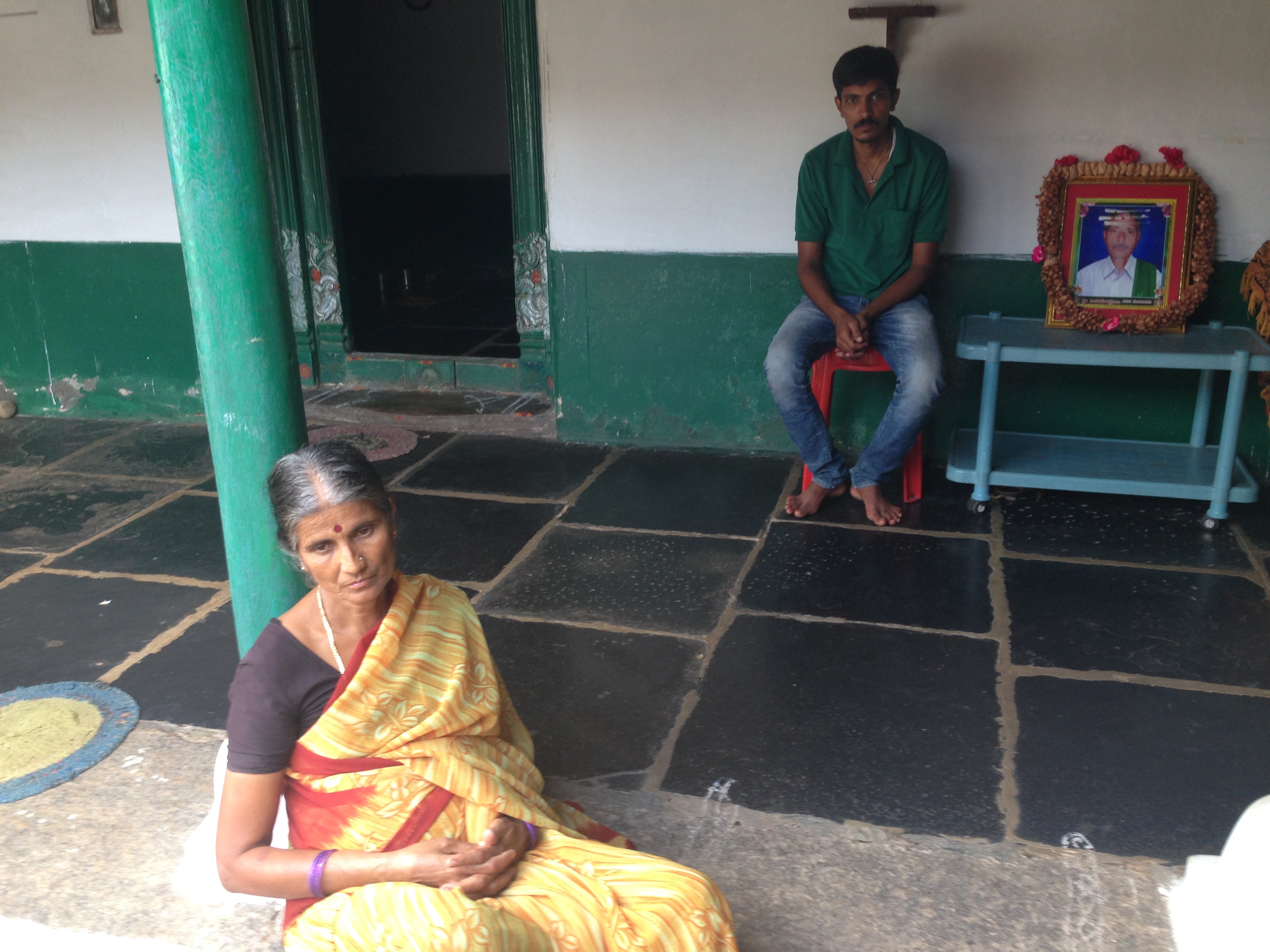 The immediate trigger for the current farm distress, that has resulted in more than 40 farmers in Mandya killing themselves, is the crash in sugarcane prices. Sugar prices fell by as much as Rs 700 per quintal in April leading to falling dominoes down the production line – sugar mills not making money and paying their arrears to sugarcane farmers whose crops sold cheap or not at all. Although sugarcane farmers have been hit particularly hard, suicides are being reported across the state – from Tumkur, Yadgir and Ballari and by farmers growing paddy, areca nut, vegetables and gram. The erratic rains this year had no small part to play with hail in April destroying some of the crop and the following dry months ruining others.

The only way out, Madhu feels, is to have all farmers’ debts waived. Given the option, he would like to give farming up altogether. “We would like to tell the government that give us jobs in some industry so we can carry on with our lives,” he said.

The last silk farmer of Muggenahalli

“I can’t do this anymore. I plan to wrap all this up and find some work where there is some respect,” said Kodandaraman, a 35-year-old silk farmer in Muggenahalli in Ramanagaram taluk near Bengaluru. His father was a silk farmer as was his grandfather. He himself has been working in the mulberry fields since he quit studying after the 10th standard.

Kodandaraman has an outstanding loan of Rs six lakhs, which he took to keep his sericulture going and to build and run his house. He is now struggling to repay both his interest-free loan to the government-run bank and loans to the moneylenders who charge interest of 7% and more. “The moneylenders’ rates keep changing. They say 7% annually and if we default on that it becomes 12%-14%. But they don’t tell us properly. We have to renew loans on whatever terms they decide,” Kodandaraman said.

Narasaraju, an activist with the Karnataka State Farmers’ Association in Mandya, said that even the system of getting a loan is loaded against farmers. “Small farmers don’t get loans easily. Others, who want to buy tractors, or apply for housing loans or government employees who apply for personal loans, get them easily. A farmer will be asked to mortgage his land as surety against the loan and then he will have to wait two months to get the money. What will he do in the meantime? He goes to a private moneylender where he pays 10-20% interest,” he said.

Silk prices have also fallen drastically this year. Silk cocoons that used to fetch Rs 450 per kilogram at the nearby Channapatna silk market just three months ago now sell for just Rs 100. At times the farmers have had to sell for as little as Rs 80 per kilogram. This, they say, is for a good batch of cocoons that will yield strong unbroken threads in the hands of silk reelers. The farmers blame the price crash on the central government’s move earlier this year of reducing silk import duty to 10% from 15%.

“It’s been a week this time since I delivered the last batch of cocoons at the Channapatna market. I still haven’t got paid,” said Kodandaraman. 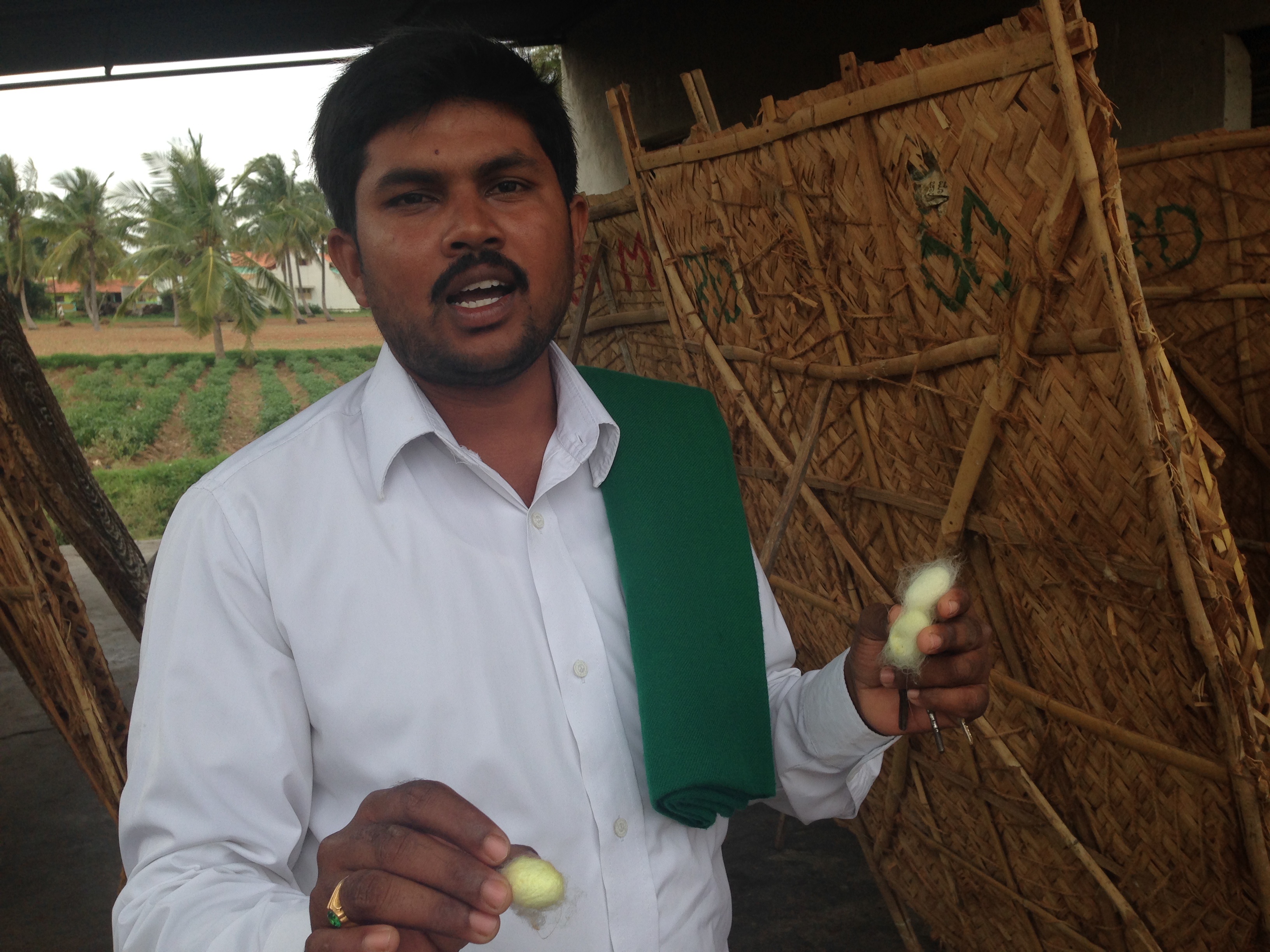 Kodandaraman is, quite literally, the last silk farmer in his village. Everyone his age and younger has moved on to jobs with small private companies in Bengaluru and beyond. For Kodandaraman too, the travails of the present season have pushed him to consider his alternatives to a profession where he feels there is no respect anymore. “More than money we worry about our reputations. If a bank official comes to your house then everywhere people begin to talk. It’s this loss of reputation that drives so many people to commit suicide,” he said.

Compensation is not enough

Silk farmer Jayaraman committed suicide in his Mandya village on August 1. He was already under financial stress having to look after a relative whose kidneys were failing. When the silk price crash came, it broke him.

Former Karnataka Chief Minister HD Kumaraswamy visited Jayaraman’s home after the tragedy and bestowed a compensation of Rs 50,000 on the family.  “This compensation gives no relief at all. Fixing a proper price for agricultural produce is the only solution,” said one person among a crowd of relatives at Jayaraman’s house. This, they demand, in addition to having all their debt waived. 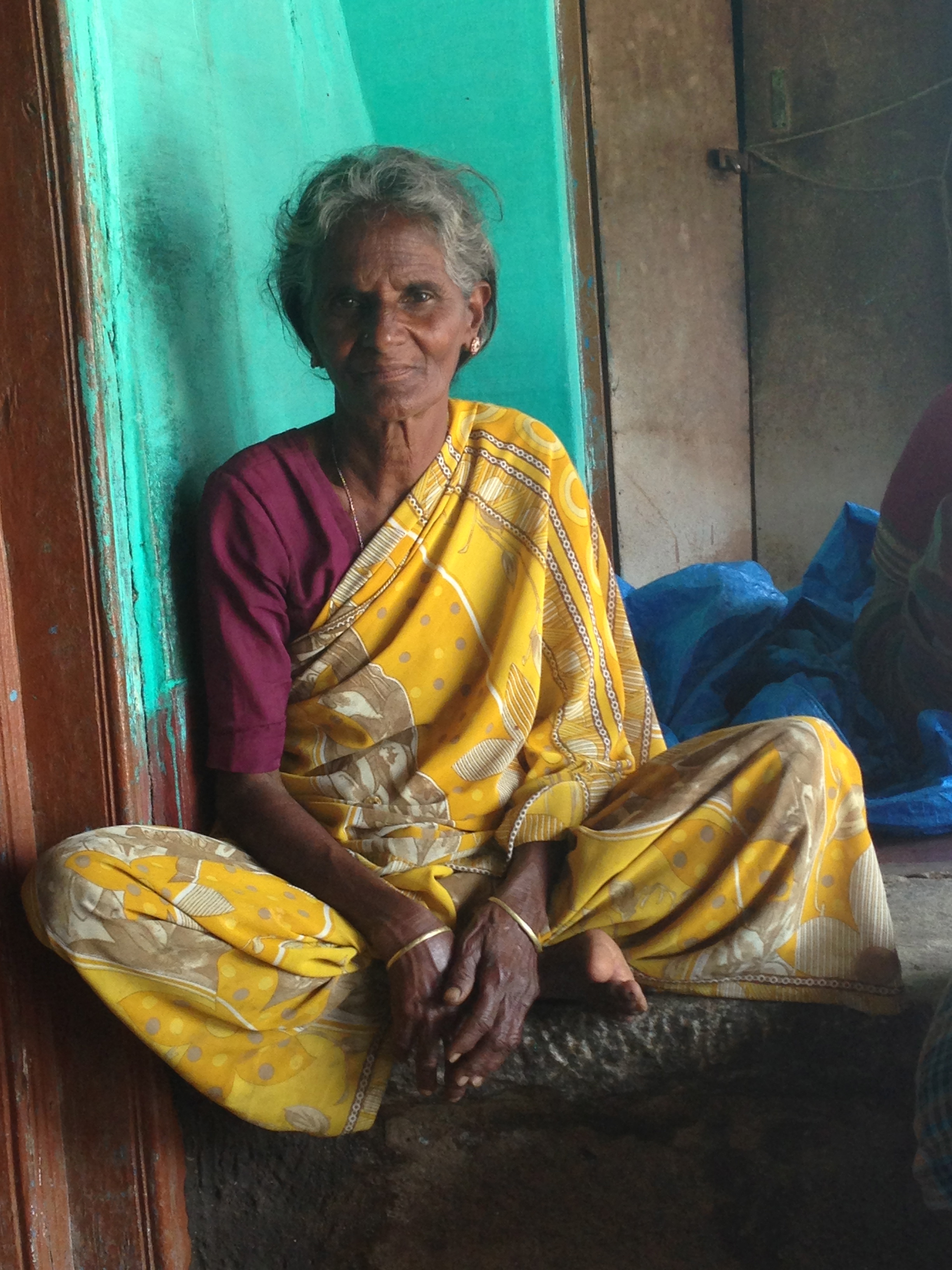 Sushma’s 36-year-old husband Shivanna killed himself over the inability to sustain his sugarcane growing business. Sushma now must take care of her infant child and six-year-old mentally challenged daughter.

“Even if they give us lifelong compensation, it won’t be enough to live properly. I hope the government gives me some small job,” she said in tears. 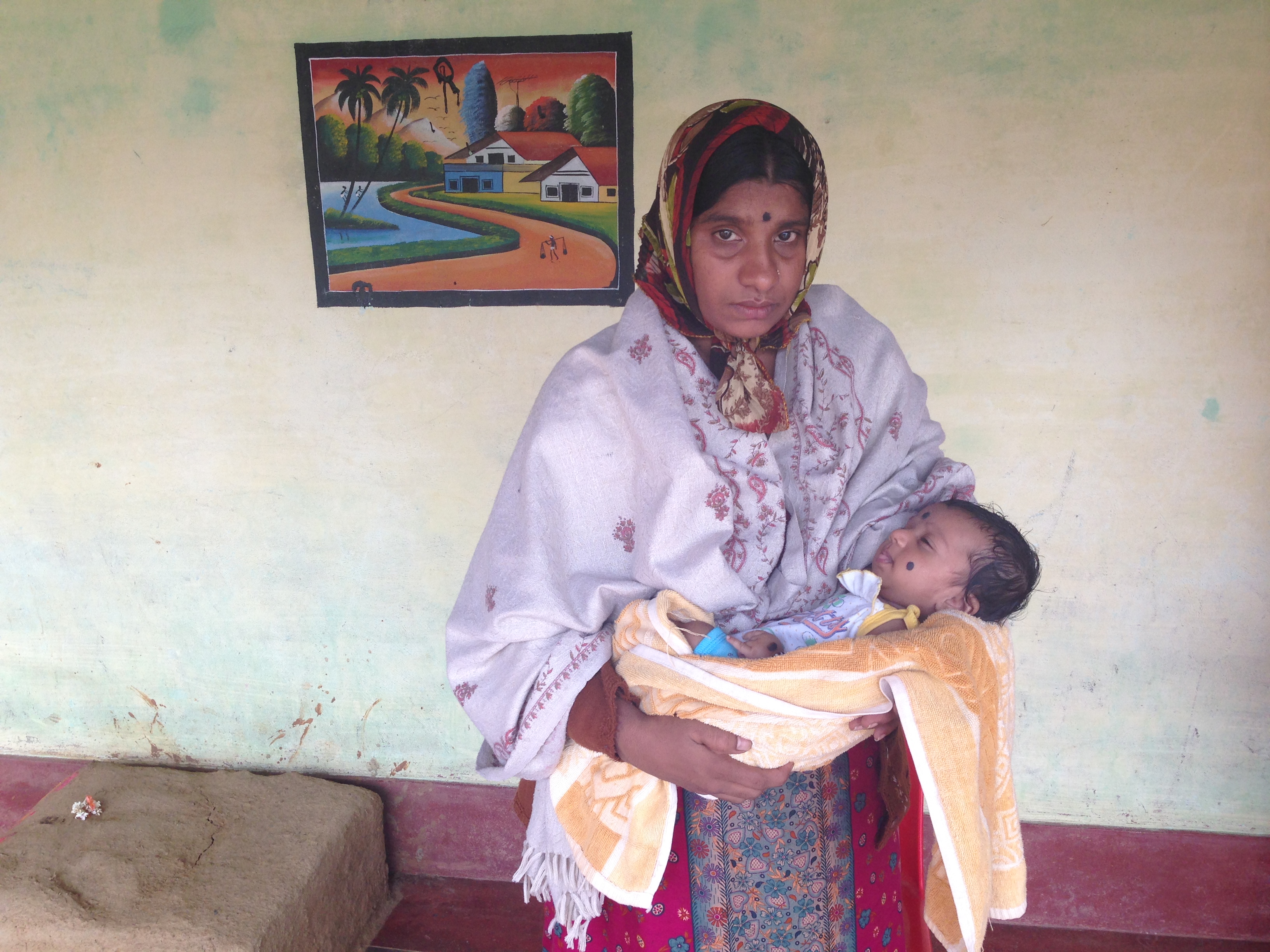 Prasad, son of K Murthy who committed suicide on the night of July 31, echoes Sushma’s request. His father mortgaged 30 guntas of land (three-fourths of an acre) on which he grew rice for Rs 4 lakh. “Last year we had a good crop. This year the people to whom the land was mortgaged saw our mounting debt. They took over the land and didn’t let us plant anything,” Prasad said. All he wants now is a secure job to take care of his family.

“In our generation people are still farming,” said Sushma’s neighbour Puttuswamy Gowda who appears to be in his early 60s. “The next generation is moving out and looking for other jobs. After us, agriculture production is bound to fall.”

Although Madhu calls his father Rajendra’s death the first suicide in Mandya, it’s only the first in recent years. In 2003, 22 farmers in the district killed themselves during another tragic spate of suicides across the state. In the new crisis is the same old story.

Reading Ambedkar: Why protesting farmers were right to demand the release of jailed activists