Contribute Now
Ad
Thursday was yet another day Twitter spent piling on Rahul Gandhi. This time because he was carrying crib sheets for his speech in Parliament on Wednesday.

A great many people ribbed the Nehru-Gandhi scion about the fact that while his notes were mostly in the Hindi language, the script he used was Roman. This is something that, as has been pointed out, his mother Sonia Gandhi has done as well.

Language purists – always the life of the party – took great umbrage to Rahul Gandhi's notes. The Hindi language, it was proclaimed, could only be written in the Devanagri script.

Rahul Baba does not know Hindi script? No one writes his own notes in capital letters. Someone wrote the script? Who? pic.twitter.com/QRJREOfJ7A

Here's one reason why Rahul baba needs a crash course in Hindi. (He probably can't write in Devanagari) @RohiniBakshi pic.twitter.com/hXRicBP76l

The big question is : Can Rahul Gandhi read Hindi?

Let’s first make it clear that “language” and “script” are two different things. “Language” is a verbal system of communication. A “script” is simply the collection of symbols used to represent that language in a visual form. So the Hindi language use the Devanagri script, the English language uses the Roman script and so on. Not only Tweeters, even news websites got this mixed up: this NDTV report, for example, said that Gandhi “jotted down his Hindi phrases in English”, essentially a meaningless statement.

Secondly, let’s also note that language and script do not necessarily have to be in a monogamous relationship. Sometimes many languages can use the same script and sometimes one language can be written in many scripts. The Roman script, for example, is used by English, German, French and the Mizo language. On the other hand, the Konkani language of Goa is written in at least three scripts: Devanagri, Kannada script and the Roman script. Modern Hindi and Urdu are linguistically one language but separate by the mother of all script battles. Sometimes a language might not even have a script. Sanskrit, for example, wasn’t written down until after it had died out as a spoken language, and existed as a purely oral tongue during its lifetime.

With Hindi, while Devanagri is the official script designated by the government of India, Rahul Gandhi is actually not alone in using Roman to represent it. In fact, it could well be argued that more Hindi is written in Roman today than in Devanagri, thanks to the internet and the script’s association with English, the prestige language of India.

Indian Twitter, which criticised Rahul Gandhi, almost exclusively uses Roman Hindi itself. Most messages sent via SMS or WhatsApp use Roman Hindi as well. Fast moving consumer goods brands prefer Roman as their primary packaging text, even in the Hindi belt. In the recent Hindi-language movie Masaan, set in the Hindi epicentre of Banaras, when the character of Deepak wants to ask out his crush, he messages her on Facebook using Roman Hindi, asking if she’ll be home for Durga Puja.

Roman Hindi has a past that long predates the internet. Bollywood posters from the earliest times have always given primacy to Roman, hiding away Devanagri and Nastaliq (Urdu script) in the corners, like embarrassing country cousins. The British Indian Army extensively used Roman Urdu and Subhash Chandra Bose, with characteristic disdain for conservativeness, wanted to cut through the non-debate over Hindi and Urdu by simply discarding their traditional scripts and using Roman to write the language. 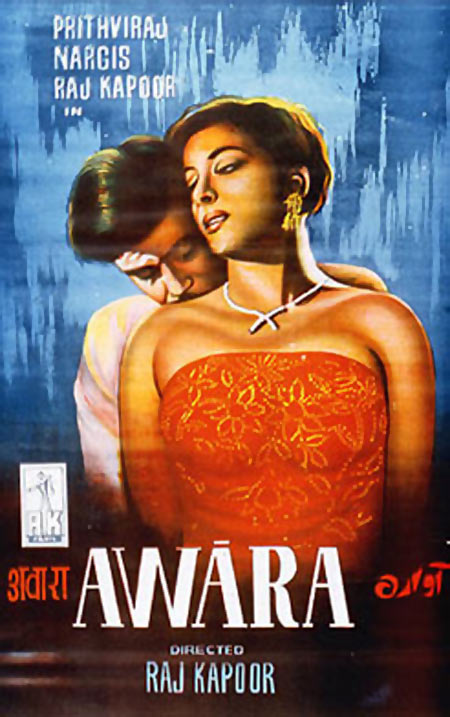 Poster for the 1951 Bollywood movie, Awara

Here’s the rub. Devanagri and Roman as scripts for Hindi-Urdu, aren’t really that far apart in age – they probably developed side by side. The first novel in Devanagri Hindi, Chandrakanta, appeared in 1888. Even before that, Bibles in Roman Hindi-Urdu had already been published by Christian missionaries. In 1909, when the British Indian Army came out with its journal Fauji Akhbar (now Sainik Samachar), it used the Devangari, Nastaliq and Roman scripts to publish its Hindi-Urdu versions.

This exclusive identification of Hindi with Devanagri is, therefore, a fairly recent phenomenon. As linguistic historian Alok Rai has pointed out, till Devanagri was officially adopted by the United Provinces (presently, Uttar Pradesh) government in 1900, a now-extinct script called Kaithi was far more popular than Devanagri. And Hindi’s greatest litterateur, Premchand, actually wrote in the Nastaliq script and it was only later that his stories were transliterated into Devanagri.

This script hopping is not unique to Hindi-Urdu. Persian changed its writing system from the Pahlavi script to the Arabic one after the Arab conquest. English itself once used a script called the Runic script (adapted by JRR Tolkien, who was also a linguist, to invent a script for the Dwarves of Middle Earth). The change was driven by Christianity, since Latin, which used the Roman script, was the official language of the Church. Post World War I, the President of Turkey, Mustafa Kemal Ataturk, suddenly changed the script of Turkish from Arabic – in use for over a thousand years – to Roman, as part of his policy of Westernisation.

In India, of course, no such explicit policy was followed and, on paper at least, the state has assiduously promoted indigenous scripts and languages. The situation on the ground, though, is messier, where global forces have ensured that the Roman script has gained wide currency ­– from the Lok Sabha to instant messaging services.

In this situation, with such massive popular support, the state policy of ignoring the Roman script is actually harming Hindi. Unlike Turkish, which modernised and shook off its cobwebs, Hindi has clung on to all that is old. This might seem romantic but the end result is that Hindi is being relegated rapidly to the status of a kitchen language: a tongue reserved for informal use while only English is seen to be good enough for official use.

This has grave implications, which will lead to the stunting of Hindi. Already, Hindi literature is miniscule and the language has almost no intellectual space. On the e-commerce portal, Flipkart, for example, one of Hindi’s greatest novels, Raag Darbari, has 27 reviews. Half Girlfriend, Chetan Bhagat’s latest English novel, in contrast, has almost 1,700 reviews. India’s leading publishing houses use English as a major publishing language and not the native Hindi, in spite of it having more than 40 crore speakers.

There are many things, of course, needed to revitalise Hindi. But one of them should certainly be a change of script to Roman. In many ways, this is a fait accompli on the ground, as more and more people use Roman Hindi in their day-to-day interactions. But to make sure that official Hindi benefits from this, an Indian Ataturk would need to make sure this change is adopted officially.

There are not many things where Rahul Gandhi can claim to have shown India the future: but Roman Hindi may certainly be one of them.

Why is India obsessed with English-medium education – when it goes against scientific consensus?