Contribute Now
Ad
The small town of Battis Shirala in Maharashtra’s Sangli district was not pleased last year. On the occasion of Nag Panchami, a Hindu festival where snakes are celebrated, the townspeople were not allowed to capture Indian cobras and put them on display as they had for generations. On that day, unlike in previous years, there were no hordes of tourists to watch the residents play with the serpents and make them writhe in a movement that resembled a dance.

Instead, the residents had to make do with worshipping statues and photographs of the Indian cobra.

The credit for that was owed to the Bombay High Court, which on July 15, 2014, banned the capture and exhibition of snakes on Nag Panchami. Citing references to the Wildlife Protection Act of 1972, the court rejected Battis Shirala’s opposition to the ban. It also cast aside the town’s contention that the festival was centuries old, pointing out that the gazette published in 1858 had no mention of the festival in the town.

A year later, there’s a threat of the inhumane tradition’s return, thanks to the Union Minister for Environment and Forest Prakash Javadekar.

A few months ago, the minister announced that existing laws would be amended to allow hunting of animals like the cobra to accommodate “religious and cultural practices”. The rethink was catalysed by the report of a high-level committee, led by former Cabinet Secretary TSR Subramanian, which was set up to review environment laws. The report said:

“India has a varied and glorious cultural tradition; while there are many national festivals, there are also localised festivals which are of great local importance in different States. Nature and animal worship has been part of the national culture. Thus, for example Nag Panchami in many States is celebrated and snakes worshipped during five days in Shravan month, as a thousands years-old tradition. It is to be noted that the snakes are never harmed – indeed are worshipped during this period.”

Nothing could be further from the truth, says Ajit Patil, an animal activist from Sangli district.

It was Patil who, in 2011, had filed a Public Interest Litigation in the Bombay High Court asking for an end to the cruelties committed by the residents of Battis Shirala on cobras during Nag Panchami. The town has 80-100 snake groups and volunteers who start capturing snakes from nearby forests 20 days before the festival. This year, it will be celebrated on August 19. Together, they snare hundreds of snakes. Before the festival, for 15 to 20 days, the serpents are stored in plastic bottles, cane baskets, clay pots or gunny bags, and fed milk, which is not their natural food.

On the day of the festival, the snakes are placed on trucks or tractors and carried around town. During this procession, they are coerced to move around to provide spectators the impression that they’re dancing. Meanwhile, devotees sprinkle turmeric, vermillion and flowers on snake, making them susceptible to diseases. “When snakes don’t live in their natural habitats, they go through stress that can be fatal,” explained Nilamkumar Khaire, another animal activist. 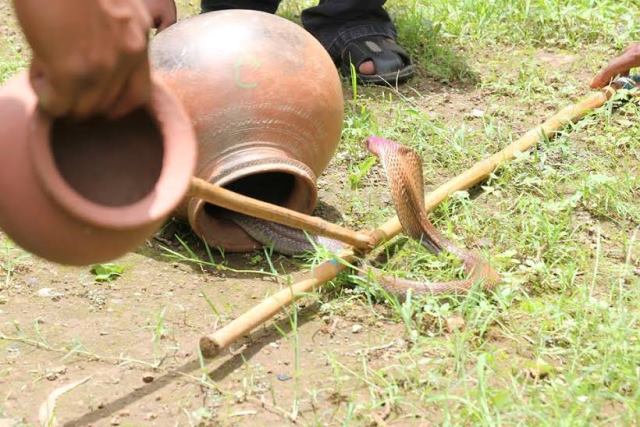 While hearing Patil’s Public Interest Litigation, the High Court had ordered the Forest Department to release all the snakes caught during the preceding Nag Panchamis. According to Samadhan Chavan, Divisional Forest Officer for Sangli, 344 snakes had been captured by the townpeople of Battis Shirala in 2010, 263 in 2011, 123 the next year and 120 in 2014.

Patil says he will approach the Supreme Court if Javadekar’s planned populist changes to the wildlife law brings back the custom of Battis Shirala. “The court has not banned the celebration of the festival, but the cruel practice of catching snakes like the Indian Cobra, which need to be protected and conserved," he explained.

Sugarcoated lies and silences: Animal rights language is made of many things